Star Wars Rebels returns to a more traditional story for this show when the Lothal based team infiltrate a Mining Guild Crawler to get a message to Hera.

What we have here is essentially another heist episode. As I’ve said before this is a common episode type for Star Wars Rebels probably because it showcases how well the characters work together as well as how resourceful they can be when being outnumbered. 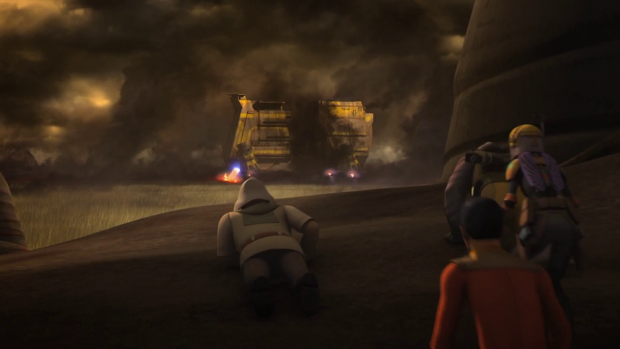 The story purpose of this particular mission is clear; their current transmitter isn’t powerful enough to get a mission to Yavin IV so they need to make use of another one. Naturally stealing is wrong even if it’s for a noble purpose so a reason for it to be acceptable for the Rebels to steal from the Mining Guild has to exist. This problem is solved by establishing that they keep slaves. Slavery is obviously bad so that provides the justification. I would have liked to see the writers play around with the concept of morality and how that relates to being a freedom fighter but with this being a kids show I can understand the desire to keep the morality simple.

On a mechanical level this episode is fine but also not that interesting. The Mining Guild Crawler looks great and has something of a monstrous presence but there isn’t an awful lot going on here. There’s a bit of a riff on the scene where Han Solo tries to talk Death Star Security out of investigating in A New Hope though it’s pretty much a carbon copy of that without changing it up in any way. Ezra’s impression of Seevor (Seth Green) is amusing at the very least but it feels like an imitation rather than a homage.

To break up the plot a little the Empire come to investigate and there is the associated tension brought on by the potential for them to find out that the Rebels have taken over the Crawler. Thanks to the apathy of the Stomtroopers the investigation isn’t that extensive and their appearance comes across as move of an inconvenience than anything else. Like I said, this episode is pretty standard Star Wars Rebels stuff and at times feels like the script was crossing items off a checklist to create the typical episode of this show. It isn’t bad and manages to be entertaining enough but there’s very little to make it stand out.

The episode isn’t completely without little bits of characterisation. Ezra’s objection to crawling through the vent shows that he no longer wants to be known as the little guy who does that. It shows a change in how he views himself as well as how he perceives his role on the team while also providing an opportunity for him to whine like he used to. 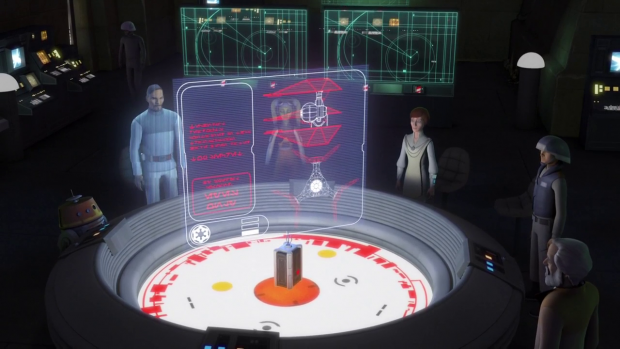 Seevor is a decent enough villain. He’s just pathetic enough to be comedic but also competent enough to be a threat when the occasion calls for it. His showdown with Ezra looks great with the constant threat of the furnace in the background. Alternate threats were a theme of most of the action in this episode such as the sheer drop featured during Zeb’s showdown with the Slave Master.

Hera’s scenes are the mos interesting. She tries to petition the Rebel leaders to authorise an assault on the TIE Defender construction effort on Lothal. If successful this would liberate the planet which is good for the people on it and deprive the Empire of a powerful new ship which is good for the Rebellion. Mon Mothma is Hera’s main opposition here as she wants to play it safe and not commit a large portion of their forces to this effort.

The conflicting opinions on this between Hera and Mon Mothma provide a solid and easy to follow arc for Hera. Her main desire in this episode is for people to listen to her plan and that involves her barging into meetings that she isn’t invited to just to get her point across. It shows real growth in Hera’s leadership skills and that her commitment to the cause is far more important than following orders she doesn’t agree with. Unfortunately the episode relegates this to a handful of scenes but it’s definitely the most interesting thing going on here. Of course she gets her away and we’re all set for a big action story in the next episode. 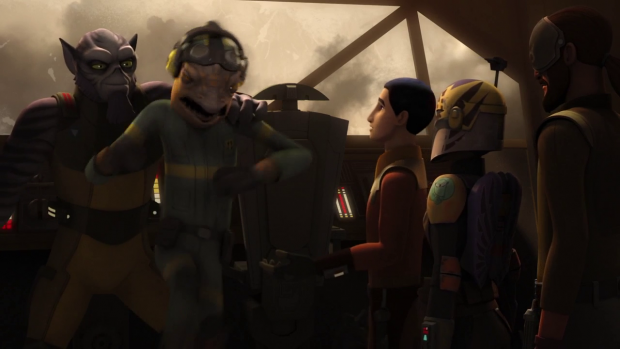 A fairly standard and uninteresting episode that has limited character development for those in the A plot. The story beats are handled well enough and the Crawler is reasonably menacing but there’s very little here that stands out. A reminder of how far Ezra has come is given when he makes it clear he no longer wants to be known as the guy small enough to crawl through vents.

Hera’s role in the episode is brief but really well done as it shows how far Hera has come and gives her a clear arc to follow. Seeing her barge into a meeting she wasn’t invited to just so she can make her case is excellent and shows the growth in her leadership skills. The contrast in opinions between her and Mon Mothma works really well as it outlines the argument clearly while giving Hera an obstacle to overcome. Naturally she succeeds and it sets us up for an action packed follow up.