Star Wars Rebels focuses on the droids as the Empire reprograms Chopper to act against the Rebels and expose their hidden base.

On the surface it seems like this episode might be an annoyance given that AP-5 sarcastically complains most of the time and Chopper communicates entirely in unintelligible noises but it’s clear that there are entertaining stories to be told using the droids as a focus. 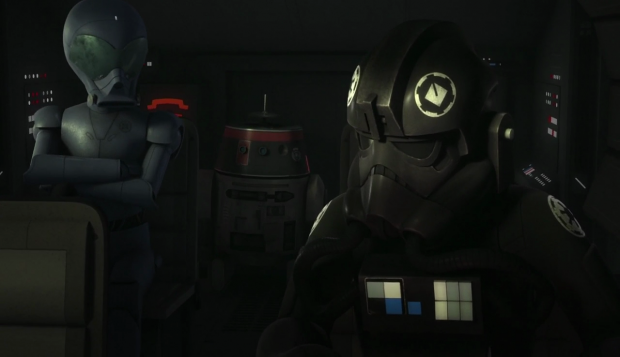 This episode is clearly supposed to be a largely comedic outing and the tone is set pretty much right away when AP-5 bickers relentlessly with Chopper over who will be most effective on the mission. Could it be considered breaking the fourth wall when they are reciting lyrics to “Anything You Can Do” from Annie Get Your Gun? I’d say there’s an argument for it considering the Star Wars universe doesn’t seem to share any popular culture from ours at any other point.

I found the bickering to be fairly amusing and it’s good that it stopped before crossing the line into irritating. Wedge’s realisation of why he was given the assignment added to the comedy nicely and it was good to see Wedge return after his introduction earlier in the season. Hopefully he will be used more as he seems to be a good character so far. He doesn’t do much in this episode but having him piloting the mission makes it believable that Chopper’s bizarre behaviour wouldn’t be picked up on since Wedge doesn’t know him well enough to realise what is considered unusual for Chopper.

AP-5 was great value in this episode. I really enjoyed him complaining to himself about how underappreciated he is and how easy the mission is as he downloaded the codes and returned to the ship. His insistence on taking full credit for everything that happened was a nice touch as well though I draw the line at him bursting into song when he was floating through the emptiness of space and surrounded by small creatures. It felt like a step too far for this show and might remind people of the Star Wars Holiday Special. It also reminded me in a very small way of the Futurama episode “Godfellas“.

Chopper being corrupted by the Empire worked really well for me as it showed the Empire as being a competent force who couldn’t be fooled so easily. The villain for this episode is only known as “Controller” (Josh Gad) but he comes across as intelligent and resourceful. He is able to identify that Chopper is a spy and finds a way to use that to his advantage so that the Empire can find out where the base is. 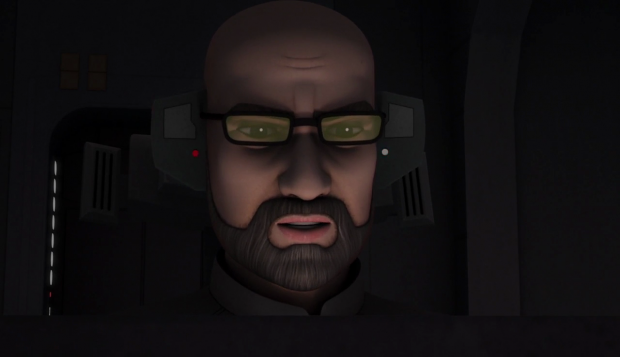 The Controller earns his pay check

Even better is that Hera is smart enough to be prepared for that contingency and has erased the location of the base from Chopper’s memory. This picks up on the Cat and Mouse game being played between Thrawn and Hera last week and it allows both sides to be intelligent without either of them making stupid mistakes for plot reasons.

The corrupted Chopper made for a good villain. He represents a threat from within the team who knows what it takes to bring them down and has the ability to take control of the Ghost in really terrifying ways. I don’t think the episode goes as far with it as it could but it works really well for creating tension.

One thing that doesn’t work quite as well is Hera’s extreme reaction to the situation. She retaliates by destroying the Imperial ship sending the control signal and presumably killing all on board which strikes me as incredibly harsh. I understand that they are at War but it’s not like Hera to be so remorseless. Her reaction also implies that she has a much stronger connection with Chopper than we have actually seen. We know that she rebuilt him when she was young so they do have a history but that connection hasn’t been evident in the way Hera behaves around him. Messing with her droid is supposed to come across as a deeply personal attack but the background isn’t there to support it.

With a little more work this episode could have been Hera and Chopper’s story and could have developed Hera’s connection to her droid companion as being something that had been impacted by the Empire tampering with him. The fact that she’s absent for a lot of the episode means that this can’t happen and that her reaction seems to come from nowhere. I could see the potential here but the episode doesn’t have enough going on with Hera to actually get there. 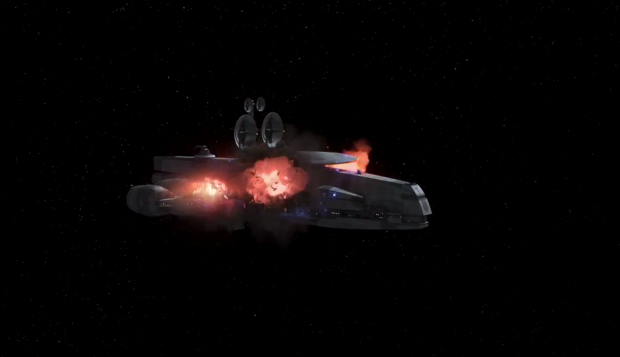 Hera overreacts in a big way

There was no way to organically include this in the body of the review but this is the first time I’ve ever heard of a toilet in Star Wars canon. It’s known as a “refresher” and Wedge needs to use it. I have nothing insightful to say about it but I felt it was worth mentioning.

A solid episode that uses the droids fairly well and successfully relies on comedy. The back and forth between AP-5 and Chopper made for good viewing as did AP-5 complaining to himself as he accomplished the mission. Chopper made for a good villain though the episode doesn’t take this as far as it could have. Hera’s reaction to the Empire tampering with Chopper felt like it came from nowhere because the show had never developed that connection between them.

The Imperial villain known only as “Controller” was good as well as it shows a competent side to the Empire that makes them a legitimate threat. Hera having the location of the base erased from Chopper’s memory allows both sides to be competent while still maintaining a threat level. 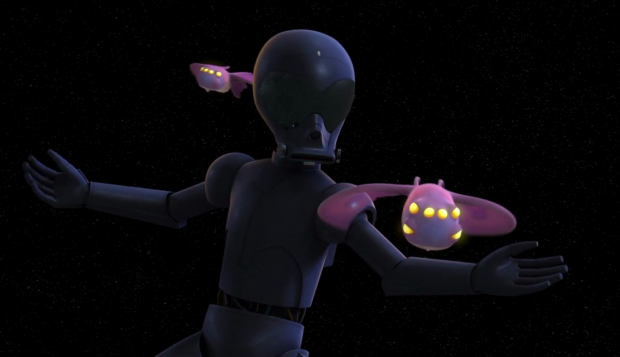