“”Flight of the Defender”

Star Wars Rebels continues the return to Lothal with an information gathering mission on an upgraded TIE Defender that doesn’t go as planned.

Heist episodes are fairly common on this show. They work well enough because they allow the characters to have a defined role and play to their strengths in the best examples. A common theme in this show is overcoming overwhelming odds and a heist scenario is a good showcase for that. 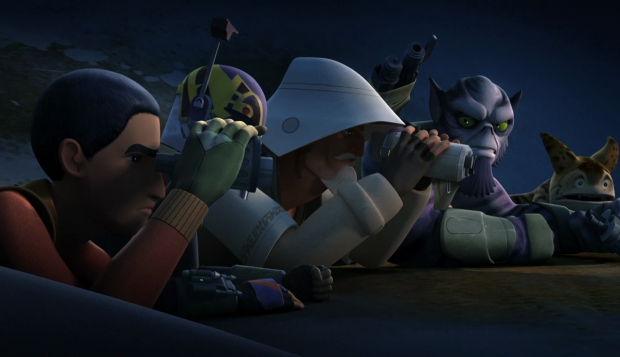 This episode focuses on Ezra and Sabine with some interaction from Zeb and Ryder who essentially back them up. The mission is actually a fairly simple information gathering one that is accomplished very early on. They witness the TIE Defender landing and have apparently taken some readings which is all that was asked for. The Ghost crew are always keen to go the extra mile so they decide to try to steal the ship.

It goes as well as you’d expect it to and plays out in pretty standard fashion for this show. Nothing about the infiltration is bad but it’s not especially memorable again as we’ve seen Ezra make use of his animal friends before and the inevitable discovery that has them fighting on the defensive against insurmountable odds.

The key thing of note here is that Ezra has a reputation that precedes him. I wouldn’t go as far to call it legendary but Pryce certainly knows his face and immediately rattles off his name which is a testament to the long running antagonistic relationship the Ghost crew have with her. 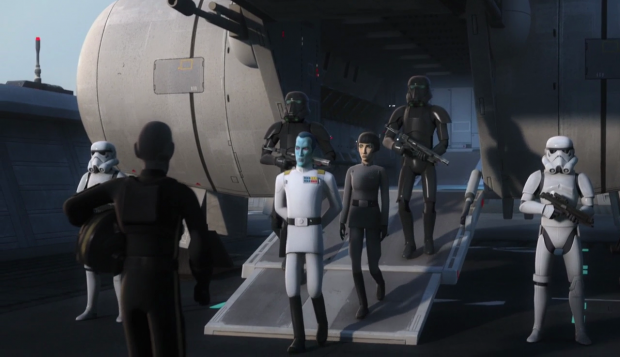 Also along for the ride is Admiral Thrawn who happens to be touring the facility at the same time Ezra and Sabine start to attack it. Many say there are no coincidences in the Star Wars universe but events like this come pretty close. Thrawn reminds the audience of how viable a threat he is by immediately assessing the situation and correctly guessing that Hera can’t be piloting the ship. He recognises that the ship itself is compensating for the lack of piloting skill and that Hera would be doing a much better job. Thrawn definitely knows his enemy but the show has yet to do something meaningful with that even after all this time. Still, seeing him face off against the TIE Defender with nothing but a Blaster Pistol is a really badass moment.

Ultimately this is a mission that both succeeds and fails. On one hand they come away with more than they bargained for as the flight computer is retrieved for the Rebellion to study and the team gain an easy way to come back and forth to Lothal thanks to a stolen Hyperdrive though I’m not clear why this makes it any easier considering the Rebellion has plenty of ships equipped with a Hyperdrive. It’s seen as a victory and that’s enough for now I suppose.

Unfortunately the episode fails to continue developing Ezra’s connection with his home world. The previous episode established that seeing his home torn apart by the Empire affected him greatly but this doesn’t appear here. It’s good to see him focused on the mission but this could also be achieved while retaining the emotional connection Ezra has with Lothal. This episode could have been set anywhere as far as connection to the characters are concerned. 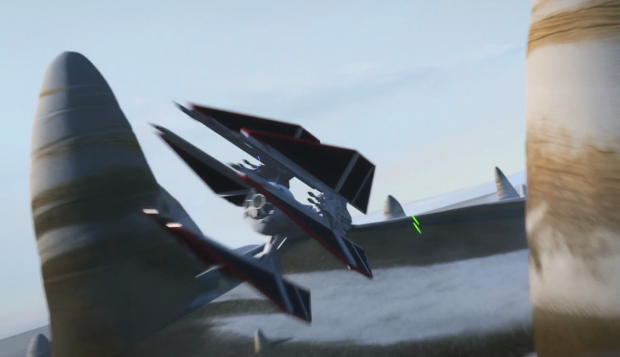 Putting the TIE Defender through its paces

The real meat of the episode comes from Ezra and Sabine’s escape. Ezra continually catches glimpses of a creature called a Loth-Wolf in the distance. They are so fleeting that he’s not sure that they’re real especially since there hasn’t been a sighting for over 100 years and Sabine doesn’t see it. This mystery builds as the episode progresses until it seems like Ezra and Sabine are mere moments away from being caught. At this point the Loth-Wolf makes itself known and knocks out Sabine before allowing them to ride on its back to safety.

It’s a great sequence and almost haunting in its execution. The Loth-Wolf easily avoids the Imperial search party and takes them to safety before saying what sounds like “Doom” to Ezra and disappearing. It’s clear that it’s appearance has something to do with the Force and that Ezra’s well developed connection with animals is at play here. My first instinct is to think that the Loth-Wolf is real because there’s no other way Ezra and Sabine would escape otherwise. The episode keeps its presence just enigmatic enough and Kanan’s statement about all paths coming together is definitely foreshadowing for the coming episodes in some way.

This show usually does the mysteries of the Force really well and this is no exception. It’s striking by how subtle it is and the way it keeps the audience guessing as to what is really going on here. The writers of this show leave the workings of the Force unexplained which is as it should be as far as I’m concerned. I’ve seen some theories that the Lothe-Wolf is some kind of manifestation of Ahsoka and there’s no real way of proving that it isn’t. It could simply be a rarely seen creature with some connection to the Force that draws it to Ezra but the beauty of it is that the true purpose remains ambiguous. 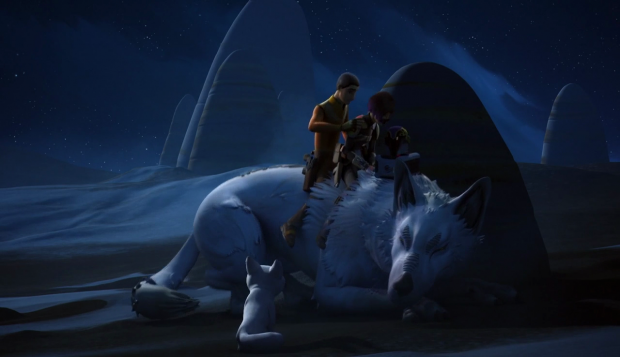 Help from a mystical source?

A solid episode that does nothing to really improve on the usual heist concept. It works well enough and builds tension nicely especially with the arrival of Thrawn and Pyce to add extra complication. Their presence doesn’t do much except allow Thrawn to demonstrate his strategic way of thinking once again. The action remains varied and fast paced which keeps the episode going.

The real meat of the episode comes from the appearance of the Loth-Wolf. It is kept mysterious with the implication that it has some kind of connection to the Force. The episode even remains ambiguous about whether the creature is real or not. Considering it takes Ezra and Sabine to safety I’m inclined to think that it is but the question remains for the audience to ponder. This show usually handles the mysteries of the Force really well and this episode is no exception.