Star Wars Rebels returns from hiatus and immediately offers a tie into the recent cinematic release Rogue One: A Star Wars Story when the crew of the Ghost are sent to investigate the disappearance of Saw Gerrera. As with all two parters that aired on the same day I’m reviewing the first part without having seen the second part so that my opinion isn’t coloured by future knowledge.

With this being the first part of a two part story a lot of this is setup which isn’t necessarily a bad thing. If the stage is set to pay off in interesting ways in the second part then the setup portion hasn’t been for nothing. This episode actually does a pretty decent job of setting up a compelling mystery and posing questions for what might come next. 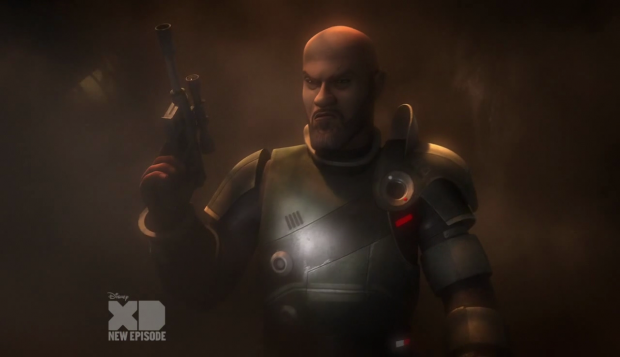 The central mystery is what happened to Saw Gerrera’s (Forest Whitaker) team after being sent to Geonosis and the episode does make us wait for the answer. Seeing Ezra, Kanan, Chopper and Rex wander through the ruins of Geonosis was effectively creepy and almost set a sombre tone since it was mentioned in “The Honourable Ones” that the Empire exterminated the entire Geonosian population. Not too much is made of it but the reminder that an entire species is wiped out by the Empire for no real reason is definitely there and it’s concerning to think about.

Unfortunately the answer to the mystery was far less compelling. It turns out that Saw’s team were wiped out by a group of Battle Droids. By itself this isn’t bad as this whole episode is framed around relics of the Clone Wars. Saw himself being a character introduced in the TV series and Rex having history with him helps to intensify that. The problem is that the Battle Droids have never been established as a viable threat so the fact that they wiped out Saw’s unit seems somewhat unlikely. This is further compounded by the fact that they are so easily taken out by Saw pretty much on his own. He has help from Kanan, Ezra and Rex but it’s clear that the small group of droids shouldn’t have been a problem.

It’s hard not to have lofty expectations for this episode when knowing that Saw is in it. He’s a character who showed up in both The Clone Wars and Rogue One which makes him somewhat unique in that he’s a character who was introduced in an animated series and transitioned to live action. Rogue One also made mention of him being too extreme for the Rebellion so my thinking is that this would be the story of how the Rebellion realised that his methods weren’t something that they wanted to be associated with. This could still happen in the next part but nothing about his behaviour in this episode suggested that. He was fine as characters go but there was nothing especially distinctive about him. The same goes for Forest Whitaker’s performance. There was nothing especially memorable about it but the lack of a sense of who the character is might have a lot to do with it. 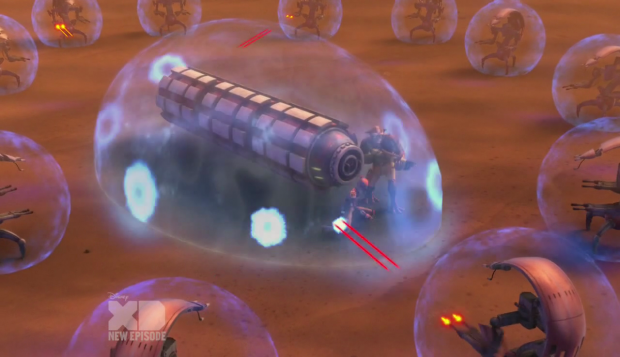 Zeb and Sabine are in real trouble now

One thing that did work well was the friendly banter he had with Rex. They are old friends and it definitely comes across. The most amusing exchange was after Kanan jumped a great distance and Rex points out that “he’s no Skywalker”. There is something of a missed opportunity here for Rex to realise that Saw has changed a lot in the years since they last met and it’s something that concerns him. There was the slightest hint of him being a little extreme when he confronted the Geonosian but since he didn’t do anything there wasn’t much more than a hint. I probably shouldn’t have these expectations of the character but knowing where he ends up suggests that this show should be showing us how he got there otherwise what’s the point of having him at all?

Zeb and Sabine were given quite a bit to do when they were sent out to check the source of some power readings. It’s essentially a fetch quest but there was some opportunity for them to talk and have a mission of their own. There was nothing especially deep or interesting about it other than the characters involved being fun characters but it’s good that all of the characters were given something to do. Hera coordinating things from the Ghost was a nice touch as it showed her leadership skills as well as making her feel somewhat helpless as her friends were either missing or definitely in danger.

The set piece moments were impressive in this episode. Kanan helping with a makeshift bridge across a chasm was wonderfully tense thanks to the bridge falling apart beneath them and the powerful score. It was a creative use of Kanan’s abilities and there was an element of uncertainty about it as we know Kanan has confidence issues. Ezra chasing after the Geonosian with the Droid remote while Chopper got in his way was well done in a farce sort of way.

A lot of the flaws this episode had could be resolved by the second part so I shall reserve total judgement but there were things this episode could have done better to establish things about Saw. The cliffhanger could have been a lot stronger as well as the episode ends abruptly rather than ending on a note that makes the next part a “must see”. 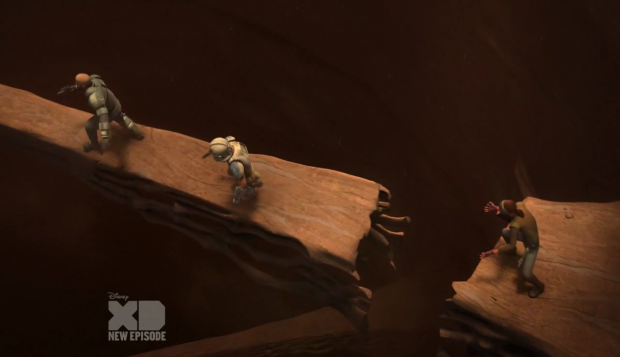 There’s no way this can go wrong!

A solid enough episode that could have done a better job of establishing Saw Gerrera along the lines of how he will be seen in Rogue One. it may be unfair to have those expectations but since he was defined as an extremist in that film then surely this episode must dig deeper into that otherwise his appearance is almost pointless. The mystery is built quite effectively in the beginning but the resolution of it is very underwhelming and the episode largely feels like setup for the second part which is fine but the lack of an effective cliffhanger makes the build-up feel uneven. There were some good set piece moments such as the makeshift bridge sequence and the fact that all of the characters got something to do is refreshing.