Star Wars Rebels focuses on Hera as she takes on a personal mission to retrieve a family heirloom.

This season of Star Wars Rebels is doing a good job of balancing the characters. Previous seasons were far more focused on Ezra and Kanan so it’s good to see other characters having more to do so early on. Hera has always been an interesting character and the rare episodes that focus on her enrich her in fascinating ways. 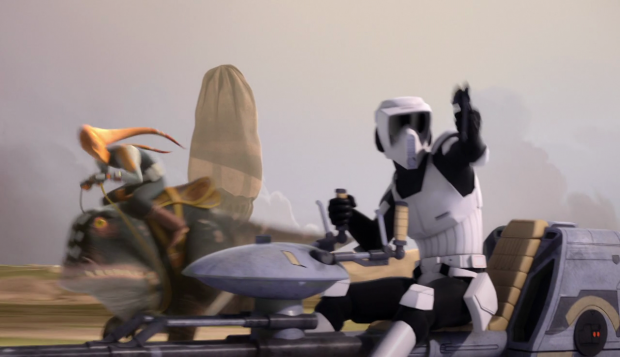 Just another day in the Rebellion

Retrieving an heirloom might seem like a waste of Rebel resources considering there is no material or strategic gain for the battle against the Empire. The episode does address that this is a personal mission for Hera and that she doesn’t want to drag anyone else into it. Everyone else volunteers out of loyalty to her.

The heirloom is important to Hera because it reminds her of her mother and is a representation of her culture. Essentially it represents everything she is fighting for so having it would be a significant personal victory for her. Hera is a soldier and this episode explores that. She has gone from the Clone Wars to fighting the Empire without a break. Her entire life has been defined by conflict and it’s clear that she needs a reminder of what it is she’s actually fighting for.

Above all else the Rebellion are fighting for freedom. In the broadest sense they are fighting for freedom from the Tyranny of the Empire but on a personal level they are fighting to preserve their own sense of individuality. Hera is a great example of this as shown through the nostalgic feelings she has about her family and her home in general. The heirloom is very personal to her as it is something that is developed across generations. Her mother was the last to add to it and she will be next.

Hera learns an important lesson in this episode. At first she feels that she needs to have the object to help inspire her and remind her of what the war against the Empire is all about but she lets this go by the end of the episode and realises that she has enough to inspire her such as her father as well as being constantly surrounded by her crew. Her crew are her family and that is ultimately all she needs. The fact that she destroys her old home and the heirloom along with it shows that she has found all the reason she needs to continue the fight with the necessary determination. 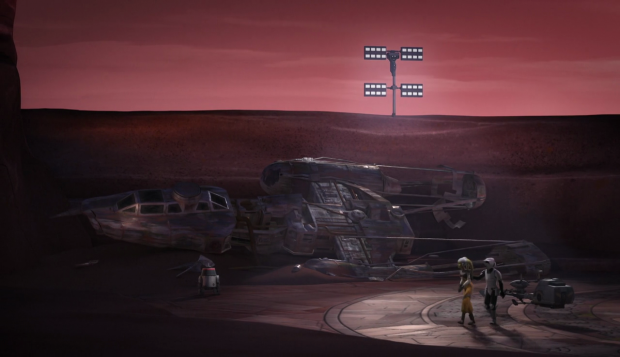 A relic of the Clone Wars

It doesn’t completely add up as there are some development opportunities that aren’t fully exploited. We get the sense that Hera misses her mother and wants to honour her in some way but this is mentioned so late on that it feels a little unimportant. Nothing about her mother is really revealed so we don’t get any insight into their relationship that makes Hera’s desire to honour her meaningful. Looking for a reminder of why she fights was reason enough but the mention of her mother clouds things somewhat.

The Empire don’t see the value in family heirlooms and regard this as being worthless. This is where Grand Admiral Thrawn comes in. He understands that people have attachments to things that remind them of family and friends and sees this as something that can be exploited to achieve victory. Thrawn sees these attachments as being the key to bringing down the Rebellion and spends a good amount of the episode trying to understand Hera, her family and her culture.

This tells us a lot about Thrawn as a character as we learn that he is a master strategist. There’s a real sense that he’s playing the long game in bringing down the Rebellion. Stopping Hera and the rest of the Ghost crew would bring down some notable Rebels but it would also be relatively insignificant as victories go. Thrawn wants to bide his time and achieve something more significant. To do that he will need to understand his enemy and learning more about them is a great way to do that.

Thrawn also respects his opponents. He refuses to let Slavin belittle the Twi’lek culture and shows genuine appreciation for them. His conversation with Hera shows that he finds her to be a worthy opponent and holds her in high regard. Understanding her will be the key to defeating her and he doesn’t underestimate her the way the Empire has so far.

All of this makes Thrawn a fascinating character who represents a real threat for the Rebellion. When Hera and the Ghost Crew escape he says “They’ve earned their victory today”. He doesn’t see this as a significant loss and knows that it isn’t over. The operative word in the sentence is “today” which obviously means that he thinks their next encounter will be very different. If Thrawn continues to be so deliberate in taking on the Rebellion then it’s easy to see how he can carry the season as the main threat. 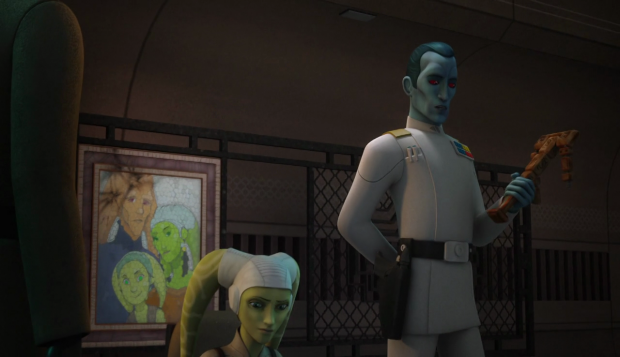 The action sequences in this episode were really impressive for the most part. The opening sequence involving the Scout Trooper looked great and had some impressive tactics. Later sequences were less impressive but they were impressive on a visual level. They helped punctuate the quieter moments with some excitement happening elsewhere.

A really good character piece for Hera that helps redefine her motivations and sheds light on the attachments she has. The exploration of what the war against the Empire means to her and how living her life in conflict weighs on her is great and layers are added to Hera as a result. The mention of her mother clouds the issues somewhat as it was all making complete sense up to that point but there is some really strong character work despite that.

Grand Admiral Thrawn is established as someone who respects his opponents and spends a lot of time trying to understand them so that he can defeat them. His calm way of interrogating Hera while showing that he holds her in high regard is both sinister and fascinating. It’s clear Thrawn is a significant threat for the Rebellion.