Star Wars Rebels returns for its fourth and final season and starts off by revisiting the Mandalorian story and give Sabine some much needed development. 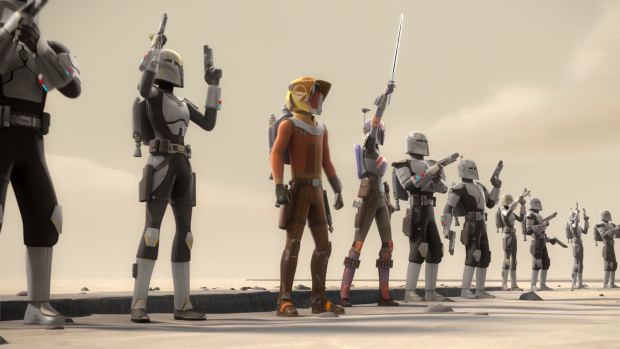 This show has had its ups and its downs but on the whole I would say it has been a very good example of Star Wars storytelling. I’ve grown attached to these characters over the course of the series and I’ll genuinely miss the show when it goes. Thankfully that isn’t an immediate concern as there are still a few episodes still to go. Normally with a two part premier I split the reviews into two parts but in this case I’m making an exception as the first part doesn’t supply enough material to justify a review of its own. Not in a bad way but I’ll get to that.

Sabine has been a character who has gone mostly underserved over the run of the show. She gains some development here and there and the Mandalorian arc last season was the best work she’s had on the show but it’s rare to get a true sense of who she is beyond artistic warrior.

Now that she wields the Darksaber her people are rallied behind her creating something of a Mandalorian faction within the Rebel Alliance which becomes important enough for some of the other character to lend their support. In this case Ezra and Kanan managed to get Hera to convince Mon Mothma to sanction this mission. This red tape approach shows the difference between the Ghost crew and the wider Rebellion as Mon Mothma sees it as a cause like any other with an army that has to be strategically deployed to get the most out of them. As far as Ezra and Kanan are concerned Sabine is family and family comes first whether or not the Galaxy is at stake. It’s a noble sentiment and has been backed up by the many episodes these characters have spent bouncing off each other.

Telling a single story over two parts does this show a lot of favours as it provides the writers with room to let the impact of each moment sink in. Star Wars Rebels often has the tendency to downplay a huge revelation by moving onto something else very quickly which could be a consequence of the length of the episodes. That problem doesn’t exist here thanks to the extra time allowing the emotion to land. 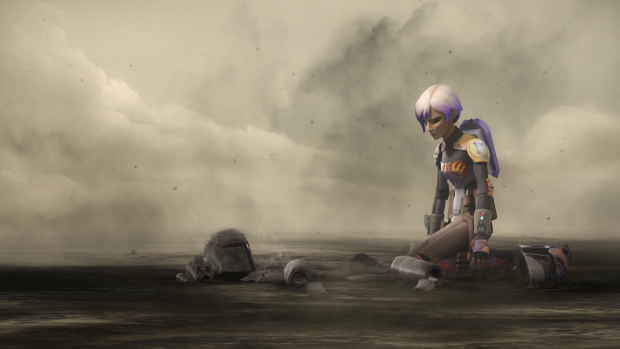 The first part of the two parter is mainly action which can be really interesting and revealing about the characters if done correctly. This episode is exactly an example of this being done correctly as each of the characters have a purpose, the sequences themselves are filled with impressive visuals and organically build suspense while there is plenty of variety to keep them from becoming stale. It feels like the sequences were built around the characters and their particular skill sets.

Sabine is a fierce warrior who capably leads her people and reacts intelligently to the changing situation. The action is emotionally driven as its a race against time to save her father which is automatically interesting as it’s a rare opportunity to gain some insight into Sabine’s back story. We know she deliberately keeps her past hidden because she has trouble dealing with it and the fact that she allows Ezra, Kanan and Chopper to join her on this mission shows how important they are to her as she is giving them access to a viscerally private part of her life.

The scene Sabine shares with her father Alrich (Cary-Hiroyuki Tagawa) is really touching and delivers a lot of information about their relationship in a very short time. We learn that her artistic streak is at least partially informed by her father -though he insistst it was her mother- and it’s clear they are very close. The episode focuses less on Sabine’s relationship with her mother and brother but they have appeared before so I agree with the decision to deliver something new. It is a little cheap to have the cliffhanger between the two episodes involve Sabine believing that her mother and brother are dead after the deployment of the experimental weapon only to reveal that they’re fine directly after.

Despite this the deployment of the weapon is appropriately unsettling. It’s scarily effective seeing the burned bodies which very clearly indicates that everyone exposed to the weapon died a horrible death. It’s especially disturbing knowing this is a show aimed at children. Death is nothing new in Star Wars but I must admit I wasn’t expecting to see this and really wasn’t expecting the episode to linger on it for so long to let the ramifications sink in. 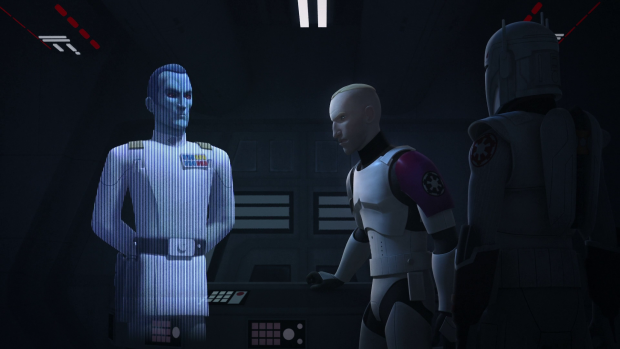 Sabine feels more than a measure of responsibility for this senseless death as she helped design the weapon. It has been named “The Duchess” after Satine because of the stupid mistakes she made. It’s something of a lazy callback but it also allows the audience to get a little bit of insight into how Sabine views members of her own society.

The arc for Sabine involves atoning for her mistake in helping to develop the Duchess. It can be seen as a metaphor for creativity as something she created has been badly perfected into something dreadful but it also numbers as a black mark on her past that she now has the opportunity to deal with. She is met with a very clear choice by the end of the episode when she turns it on the Stormtroopers. She can either take the weapon for the Rebellion or do away with it entirely. It’s something she wrestles with as the Stormtroopers writhe in pain but she eventually decides to put an end to it and destroy it once and for all. Sabine makes a moral choice to be the better person and refuses to win a war by committing untold atrocities. Some of this is undercut by the fact that her decision to be better and spare the Stormtroopers results in their death when the Star Destroyer blows up with them on it. It’s not something we’re supposed to focus on but it’s actually darkly funny.

Of course the Duchess would have been an effective weapon for the Rebellion but Sabine’s decision has nothing to do with them. Everything she does in these two episodes is about repenting for her sins and reclaiming her family’s honour. Her interactions with Bo-Katan (Katee Sackhoff) are instrumental to this arc. Sabine shows intense loyalty to her clan and her people through her actions in these episodes. Her journey towards redemption is presumably completed when she hands the Darksabre over to Bo-Katan as a symbol of leadership and that Sabine trusts her to take her place.

The episode really fails on its villain. Tibor Saxon (Tobias Menzies) is a pale shade of his brother, Gar who was nuanced and interesting but Tibor simply comes across as an Imperial puppet complete with over the top claims about Palpatine showing him the way to “true power”. He’s a moustache twirling villain if there ever was one and his only desire is for power. Tobias Menzies delivers a fine performance but there’s just no depth here which makes him fail as an antagonist for Sabine. 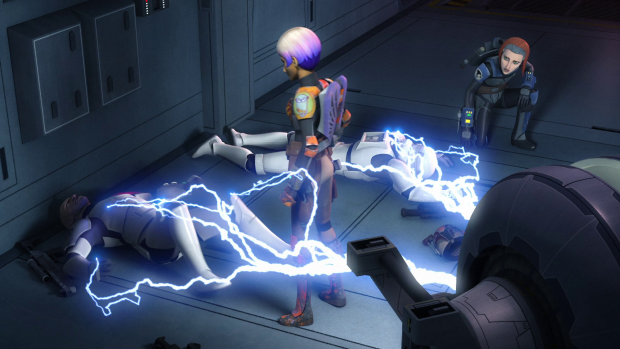 A choice to be made

There was a real opportunity here to explore Mandalorian culture and question whether there might be a better way of doing things than constantly fighting. Warring clans have chipped away at the planet with their battles to the point where there’s little more than a wasteland left so it would have been interesting to have someone question if all the fighting is really worth it. Sabine is ideally place to do so. The irony of a weapon being used against the Mandalorians that targets the armour that they always wear is addressed but the idea of the clans being united under a strong leader to show them another way is barely touched on.

Interestingly Sabine is somewhat stuck in the past and refuses to let go of it. It is suggested that the Duchess poses no threat if she simply doesn’t wear her armour but Sabine refuses to do that because the armour she wears is 500 years old and massively customised. There’s a lot of sentimental value attached to it and she isn’t able to go into battle without wearing it even though removing it could ensure her safety. There’s clearly a long way to go before Mandalorian culture improves but the lessons Sabine learns here are the first positive step.

Ezra, Kanan and Chopper run backup for the most part and act as the outside observers looking in. It’s a good if typical perspective that delivers a slightly different outlook periodically. The best scene for Kanan was his awkward conversation with Hera where they are both on the cusp of admitting their feelings for one another but stop just short of doing so. The show has played fast and loose with them being in a relationship since it began and I’m hoping the question will be answered before the season is out.

Since he is mainly here to back things up very little about Ezra’s current mindset is revealed. There’s a running gag involving his lack of familiarity with a jet pack that manages to be amusing without making him seem overly comical and he generally conducts himself in a fiercely competent way. At no point is he useless to increase the tension and he fights with Kanan as a cohesive unit showing the Master/Apprentice bond that they share. This isn’t Ezra or Kanan’s story and their place within it feels natural. 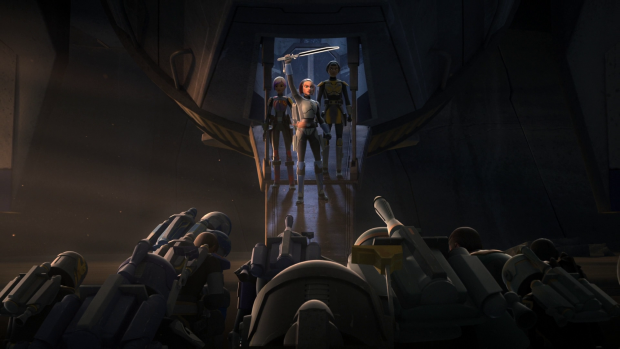 An excellent opening for the season that provides an intimate exploration of Sabine’s role within Mandalorian culture. The story focusing on her atoning for past sins by destroying the weapon she helped create is a strong idea and the double length episode allows for the emotionally resonant moments to have the impact that they deserve. Sabine has a strong arc in the episodes culminating in her finding a better way to move forward when she destroys the weapon rather than use it to commit atrocities of her own. This arc ends when she passes the Darksaber to Bo-Katan.

The story fails in the villain department. Tibor Saxon is bland and underdeveloped while also never managing to be threatening. He is a means to an end and your average villain drunk on power. The lack of nuance to the character somewhat drags down the conflict as he can’t be taken seriously. Ezra and Kanan were well used in the episode as competent backup for Sabine and the rest of the Mandalorians.