Star Wars Rebels returns to the Mandalorian story and brings back Fenn Rau when the Concord Dawn route goes quiet.

One thing this season has done very well so far is giving other characters more to do. Sabine has always been an interesting one and this gives her another episode focused on her after the excellent “The Antiles Extraction“. Going back to her Mandalorian roots should be a great opportunity to get some insight into her character. 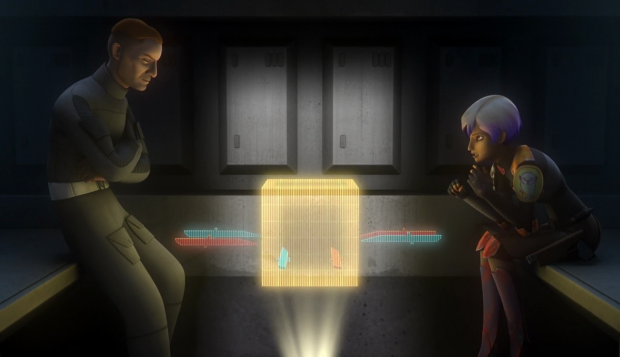 Sabine and Fenn Rau discuss what motivates them

Sadly this qualifies as a wasted opportunity as there isn’t much in the way of development for Sabine or any real insight into her feelings on the current Mandalorian situation. She does have plenty of opportunity to show her considerable skills but I was hoping for a little more. The mention that her mother is working with the Empire should have had more impact than it seems to. It will undoubtedly come up later but Sabine didn’t seem at all phased by the reveal.

Fenn Rau is an interesting character and it was good to have some follow-up to the events of “The Protector of Concord Dawn“. Sabine wants him to join the Rebellion and clearly hasn’t stopped trying to convince him since last season. Rau is only loyal to Mandalore so sees his deals with the Empire and the Rebellion as nothing more than a means to an end. Since he has no loyalty to them he has no desire to risk his life for either of them.

His world view is challenged when he sees the destruction done to his home and witnesses the betrayal when other other protectors are seen to be working for the Empire. It is against everything he believes in and causes him to rethink his position on the Rebellion.

On paper this is all really good but the episode doesn’t explore it well enough. Rau’s admiration of Sabine’s loyalty to Ezra is sold as the justification for him agreeing to join the Rebellion but it feels really unearned. Having him feel betrayed by his people was ample justification for this and didn’t really need this to be bolted on. If framed differently this episode could have been about loyalty but instead it all blends together in a really haphazard way. 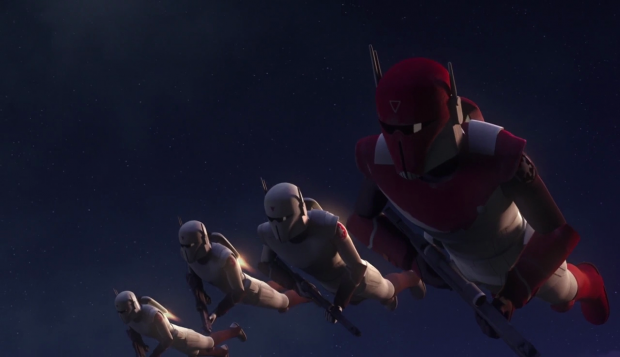 With a little more work the script could have really enhanced the idea that Rau values loyalty and sees members of the Rebellion as being loyal to one another in ways that the Empire aren’t through Sabine’s actions. Especially with the betrayal at the hands of people he trusted it would make sense for him to latch onto similar traits in a different way.

Gar Saxon (Ray Stevenson) was clearly supposed to be a better villain than he was. The fact that he knew Ezra was lying at all points is fair enough as it shows that he’s more competent than the usual Imperial lackeys the team encounters week to week but the line about Ezra betraying more of the truth with each lie was really bizarre. If it had gone somewhere and Saxon was able to learn something about Ezra that would have helped him in some way then it would have made sense but it seemed to be in the script because it sounded cool rather than having any depth do it. At least he seemed like a good match for Ezra and he was appropriately menacing for the most part.

When it comes to action this episode was very impressive. The jet pack chase was incredibly well executed with enough strategy and luck to make it feel very unpredictable. Ezra being carried by different characters and using the environment to his advantage was great and there was a real sense of jeopardy throughout. The Mandalorians definitely count as a viable threat and this sequence really showed it. 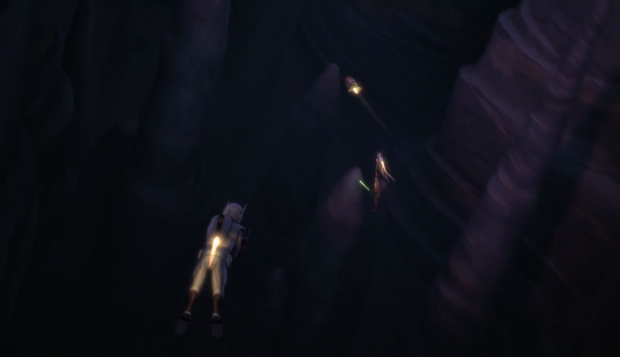 A problematic episode that has some good ideas but doesn’t execute them well enough. There were plenty of opportunities to develop Sabine’s relationship with her people and give some insight into her past but they aren’t taken in any significant way. With more work the script could have developed Rau’s admiration of the loyalty the Rebellion show to each other but the revelation is unearned. Saxon was a decent villain but also had a lot of potential that the episode doesn’t take advantage of. The jet pack chase sequence was excellent with some really well executed strategy combined with luck. It was fast paced and exciting so leaves the episode with something to recommend.