“In the Name of the Rebellion Part 2”

Star Wars Rebels follows on from the previous episode and continues exploring Saw Gerrera’s more extreme tactics against the Empire.

The previous episode dealt with Saw’s tactics in opposition to Mon Mothma’s tactics which is interesting to a point but lacks in any practical examples. This episode attempts to show how Saw Gerrera operates in the field and make a case for why the Rebellion are reluctant to trust him. 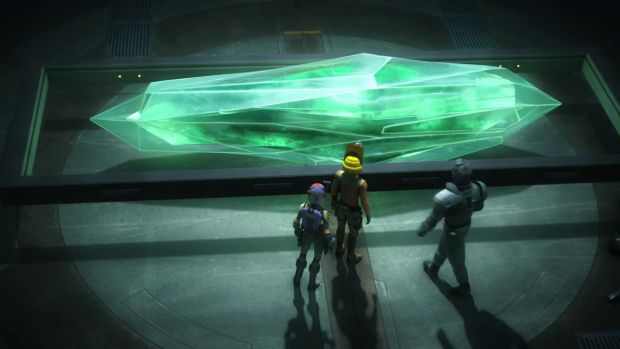 An important thing to remember is that a War is being thought and the actions people take aren’t always going to be easy to live with. Winning a War involves people doing things that are very extreme and Saw has gotten to a stage where he’s willing to perform these actions in service of the greater good.

The focus in this episode is a little bit too tight to explore the argument fully but the more intimate setting does allow for Saw’s values to be compared and contrasted to those of Sabine and Ezra. That in itself is very valuable as this show has always been about a small crew of people so taking time to explore their values relative to major players in the Rebellion is always going to be a good idea as character driven stories are much more satisfying to follow.

Unfortunately the execution of these ideas in this episode was pretty uneven. On one level it’s an enjoyable and intriguing spy story with built in tension thanks to the unwelcoming surroundings of the cargo ship as every door could be hiding unknown dangers behind it. The characters are forced to think on their feet as they fight their way through the bowels of the ship. 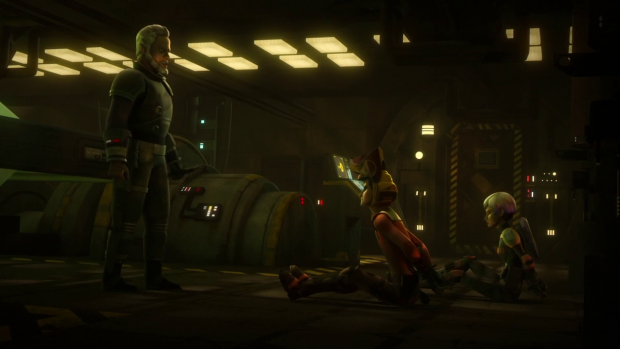 The problem with this is that the episode started to feel repetitive very quickly and the cargo ship wasn’t that interesting a location. More could be done with the claustrophobic aspect to add a bit more horror to the situation. The whole thing was perceived as somewhat routine in terms of how the characters dealt with it which is fine to a point but lessens the tension when everything seems to come so easily.

Saw spends most of the episode in opposition to Ezra and Sabine. It starts when it comes to dealing with the prisoners they find. Ezra and Sabine are focused on freeing them because it’s a fundamentally right thing to do where Saw is blinded by his desire to complete his self imposed mission. Very little can get in the way of that and he comes across as a single minded extremist on more than one occasion. It is somewhat jarring though it’s consistent with how the character was described by others in Rogue One: A Star Wars Story.

Another connection to that film is the repeated mention of a secret weapon being built by the Empire. The cargo ship is being used to take supplies to wherever the weapon is being constructed. There is mention of Krennic which immediately brings to mind the Death Star. It’s a welcome reference as it ties this show to the universe it inhabits without feeling like the references are overpowering. This episode doesn’t need to be about the construction of the Death Star as the main part of the story has nothing to do with it so the reference feels like respectful fan service rather than something overt. The story is about Saw Gerrera and his single minded belief that he is right to take the action he does. 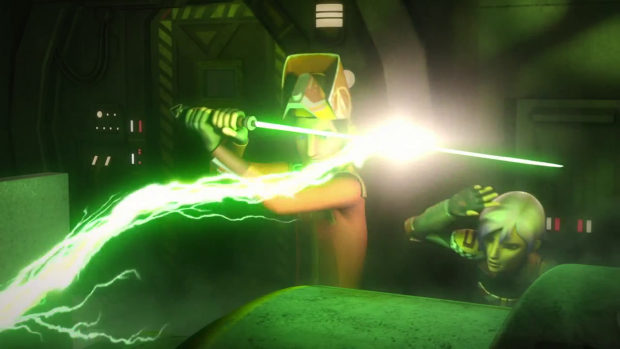 Saw has been talking about the Imperial weapon since his last appearance in “Ghosts of Geonosis” Part 1 and Part 2 and makes repeated reference to the Empire destroying an entire race of people to facilitate the construction of their weapon. Forest Whitaker’s delivery of his lines suggests an obsession but there’s also a degree of pain in his voice which suggests that his desire to protect people from the Empire is genuine. He sees his actions as being a necessary evil in the name of protecting people and the fact he has chosen to act against the Empire says a lot about what he thinks of them. He wants a free Galaxy and is willing to do whatever it takes to get there.

His single minded belief causes him to lose perspective as evidenced by his reaction to the discovery of the Kyber Crystal. He wants to wait until the ship reaches its destination so he can learn where the weapon is being built but Ezra and Sabine point out that leaving the Crystal in the hands of the Empire is very dangerous. Saw acknowledges that their right but interprets it his own by by stunning them and hiding the Crystal in another room.

The tragedy of Saw’s mission in this particular episode is that the destination of the Cargo Ship isn’t anywhere significant. It stops to meet a Star Destroyer which will presumably take the cargo the rest of the way. Saw doesn’t take this very well and takes advantage of the instability of the Crystal. He reaffirms his commitment to the Rebels by offering Ezra and Sabine a chance to escape with him but they decline as they would rather do things their own way. It’s a small moment but it shows that Ezra and Sabine have come to an important realisation about their role in the conflict. They don’t feel comfortable with Saw’s tactics and would rather find a less extreme way to fight the Empire.

Saw clearly understands and respects this before leaving on his own. Of course Ezra and Sabine escape easily thanks to a stolen shuttle and the Kyber Crystal takes out the Star Destroyer before ending the episode on a bittersweet note as the characters show that they are worried about the Empire’s potential super weapon. 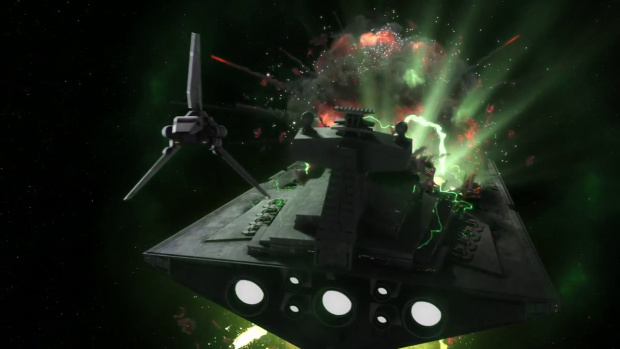 A solid but uneven episode that explores Saw’s approach in opposition to Ezra and Sabine. The episode is about them coming face to face with his obsessive nature and learning that his tactics really don’t suit them. There is some depth to Saw’s motivation in that he does seem to genuinely care but has also made a commitment to do whatever it takes. Ezra and Sabine aren’t there yet which is reflected in their reaction to his behaviour.

The episode can only go so far in exploring the ideas it poses as it is a fairly small scale spy story in a cramped location that feels very repetitive after a while. The cargo ship interior isn’t all that interesting visually and none of it feels especially challenging either. The environment could have been put to better use in terms of claustrophobic threat.