Star Wars Rebels introduces another ragtag group fighting the Empire in the form of Iron Squadron, a crew of young people trying to protect their home.

This is a difficult episode to review as it does so many things right but continually trips itself up in really fundamental ways. One episode manages to highlight everything good and bad about this particular season. 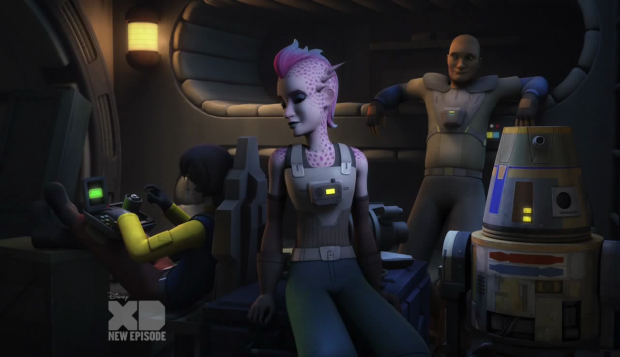 Iron Squadron in all their glory

Let’s talk about Iron Squadron first. They consist of 3 kids, Mart (Zachary Gordon), Jonner (Eric Lopez) and Gooti (Meredith Anne Bull) along with their droid R3. They have an attachment to their home planet that the Empire have decided to attack and refuse to leave because that would mean abandoning their home. As motivations go this is pretty solid since nobody likes to be forced out of their home.

This also allows Ezra to forge a connection with them as he feels exactly the same about Lothal. He felt at home there but was forced to leave because of the Empire and there is a part of him that will always resent having to do that. He shares some wisdom about it not really being about where they fight but rather what they fight for. They’re good words and it comes from a place of experience for Ezra who learned this the hard way. This is all good stuff and shows just how character driven this show can be while drawing on how the characters have developed.

The problem is that the episode does nothing with Iron Squadron feeling connected to their home. We never see the surface of the planet and the individual connection to where they live is never really dealt with. The decision to leave doesn’t carry any weight either as Jonner and Gooti go because they’re scared of the Empire while Mart lets himself be rescued. This would be fine if there had been any reflection on the loss of their home to the Empire but there isn’t. The episode simply ends and the Rebels have 3 new recruits who will be of variable use to them.

Ezra being young and reckless is addressed here as well. Mart is clearly supposed to be a mirror for Ezra as he acts without thinking, behaves arrogantly and refuses to listen to reason. This is exactly what Ezra has always been with more development on that this season. In theory it’s a great idea as Ezra can see how dangerous his behaviour is when he is faced with someone who acts like he does. In practice it doesn’t quite work as the episode doesn’t spend any time on it. A better episode would have had Ezra bond with Mart and learn things about himself that can help him and Mart overcome their destructive attitudes. 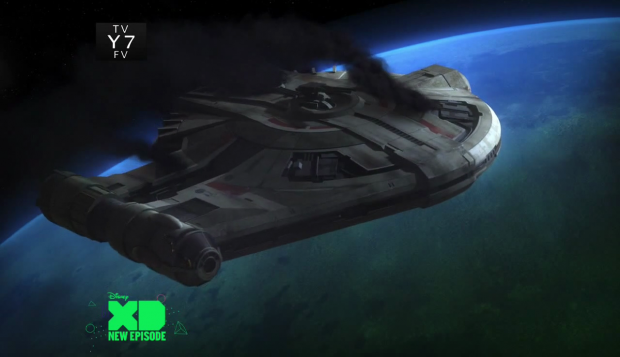 Mart gets more than he bargained for

Mart is related to General Sato which seems interesting as it gives Sato a personal stake in this. The potential for his judgement to be impaired by worrying about Nephew was there to be developed or an internal conflict caused by making a decision for the greater good of the Rebellion that means abandoning his Nephew.

The episode goes with him committing Rebel forces to rescuing his Nephew which should have had greater consequences than it did. Maybe a ship could have been lost in the effort or something like that to show that Sato’s decision to help was a significant one. Instead it all works out fine and everyone escapes. There isn’t even a meaningful scene between Mart and Sato to make up for it.

Sato’s pre-existing relationship with Thrawn intrigues me and will clearly be developed in later episodes. I suspect they served together at one point but we shall see. So far Thrawn is less than impressive beyond some interesting insight back in “Hera’s Heroes“. He hasn’t really done anything yet to justify his presence here so I hope that will chance as I can’t really take the word of the now non canon Expanded Universe that he’s a big deal if that’s not coming across here.

The action was impressively executed in this episode with some good use of guerilla tactics from Iron Squadron. Loading cargo containers with explosives is a simple yet effective tactic that shows the ingenuity that you might associate with freedom fighters. I also really liked the execution of Mart’s rescue as it showed Hera’s ability to control a situation as well as think on her feet. 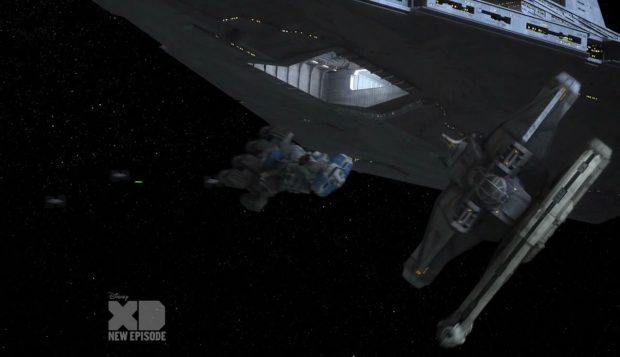 A problematic episode that does lots of things right but also lots of things wrong. The idea of Ezra seeing a mirror image of himself in Mart is a good one but it doesn’t really go anywhere despite the potential for it to develop as a lesson for Ezra. Mart being related to General Sato is another thing that doesn’t really go anywhere. If done well there could have been losses for the Rebellion caused by his personal feelings or showing that he is able to make the tough choices. The pre-existing relationship between Sato and Thrawn is intriguing but Thrawn will actually have to do something soon before coming across as ineffectual. This episode did have some well executed action that showed Hera’s ability to think on her feet in volatile situations.