Star Wars Rebels continues to explore the mysteries of Lothal as the Empire closes in on the Ghost Crew.

The previous episode set up that there was something of cosmic importance at play that connects the characters in some unknowable way. This kind of destiny fuelled storyline is something that Star Wars is well known for and also intermittently good at. Destiny stories tend to be boring as having the Hero tied to some kind of higher calling is usually substituted for character development. Once they realise what they’re supposed to do their arc ends because they have become what the story needs them to be. 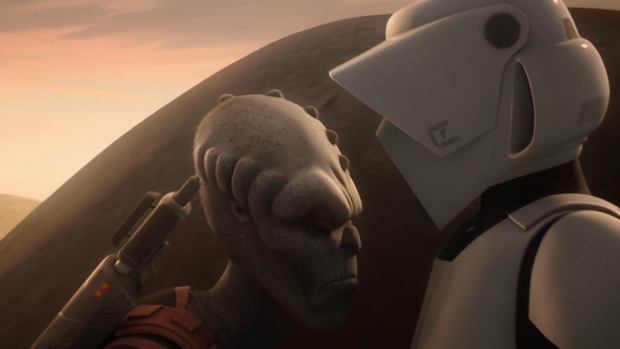 Rukh sizes up the opposition

Based on what we have seen so far that doesn’t seem to be the case here. Kanan mentions early in the episode that they have all been drawn to Lothal for reasons that they don’t understand. It wasn’t even something Kanan realised until recently so he hasn’t been building to a larger destiny. Kanan has come to realise that he’s a part of something much bigger than he is but that doesn’t make him the only important piece.

Ezra is the same though his connection to Lothal runs deeper than anyone else’s. That makes sense because it’s his home and his feelings about his home are unique to him. His sensitivity to the Force has only strengthened that connection. The really interesting thing is that the planet seems to share that affinity as we often see from his interactions with the Loth-Cats. It wasn’t always clear but if you accept that they represent the planet then having them warm up to Ezra symbolises the planet of Lothal’s acceptance of him.

This is further extended by the appearance of the Loth-Wolfs. The previous episode introduced them as being mythological and my only major criticism of this episode comes from the fact that the mythological aspect is downplayed by Ryder’s less than enthusiastic reaction to their appearance. If sightings were truly so rare then his reaction wouldn’t have been so casual.

More so than the Loth-Cats the Loth-Wolves represent the spirit of Lothal and their appearance in this episode is still deeply shrouded in mystery. Ezra knows that he should trust them but doesn’t know why and they are also very interested in Kanan for as yet undisclosed reasons but the fact that his real name, Caleb Dume comes up is intriguing especially since it is written on Lothal. There’s a really palpable sense of tension as most of the group seem reluctant to follow the Loth-Wolves because they could be dangerous. Cave paintings seem to depict them eating people though that interpretation is revisited by the end of the episode when they learn that they aren’t as dangerous as first thought. 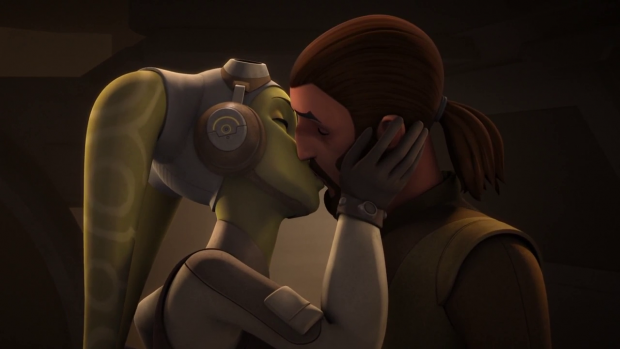 The sense of a higher power at work is further enhanced by the group being transported to the other side of the planet by following the Loth-Wolves. How this happens isn’t explained but it doesn’t really need to be; the good thing about mysticism is that it can simply exist for its own sake as long as the rules remain consistent which won’t be known until later episodes.

Outside of the mystical aspect the episode does have a strong character focus specifically relating to Kanan and Hera which picks up on their quietly intimate moment in the previous episode. This time out they actually openly discuss their feelings and share a kiss that is loaded with emotion. It isn’t all about their feelings as part of it has to do with the fact that she has to leave for Yavin IV with the information they have obtained and return it to the Rebels. She has her job and Kanan has his so it’s possible they might never see each other again. The kiss is for them to reaffirm their commitment to one another while acknowledging their responsibilities and is filled with hope that this won’t be the last time they’re together. The reaction from Sabine was priceless and served as a reminded of the family angle the show takes with the characters. Sabine has been rooting for this relationship so it’s natural she would be glad when it moves forward.

The episode does a fine job with action sequences but none of them are the best this show has had to offer. Hera’s escape was reasonably exciting and her jump to Hyperspace through the construction ship leaving it damaged was a really nice touch in showing her skill and resourcefulness. The introduction of Rukh (Warwick Davis) didn’t really work for me as I had no reason to think the character was any more than a disposable assassin. I understand that he’s a bigger deal in the Expanded Universe and he’s certainly competent enough to be a problem for those he is chasing but there isn’t much to him as a character. Perhaps this will be remedied in subsequent appearances but I’m not overly impressed for now. 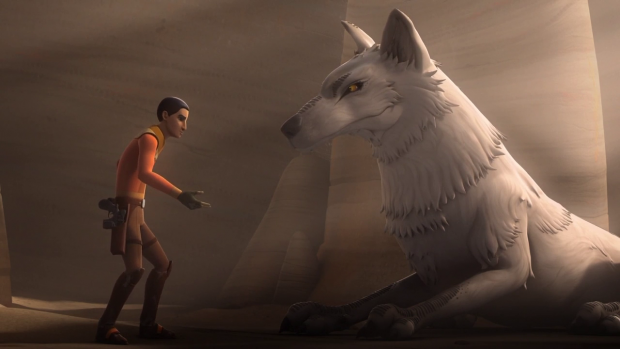 The planet will provide!

A fascinating episode exploring the mysterious and the mystical while focusing on how it relates to the characters. Ezra’s connection to Lothal is enhanced through the Force as is its connection to him. Kanan has been drawn to the planet for undisclosed reasons and the mention of his real name, Caleb Dume adds an extra layer of Intrigue. The use of the Loth-Wolves was fascinating as there’s a palpable sense of tension to their appearance since some of the group believe them to be dangerous. It turns out that they aren’t and the group are sent to the other side of the planet through mysterious means. Kanan and Ezra are realising that they are part of something bigger than them and I look forward to seeing this develop.

Kanan and Hera’s relationship also receives some development when they finally kiss at the point the have to part ways. It’s a kiss that sums up the conflict between their feelings and their responsibilities and acts as something of a promise that they will see each other again. The action in this episode was fine but nothing spectacular and the introduction of Rukh was somewhat underwhelming.