Star Wars Rebels takes us to Mandalore this week to finish off the two-part story of Sabine taking up the Darksaber, promising a lot right from the outset. The Mandalorians are always going to be one of the coolest people in the Star Wars background, which will obviously draw our attention, but Sabine’s solo plot last week was so good I’d easily believe we were all excited by the promise of more of the same. 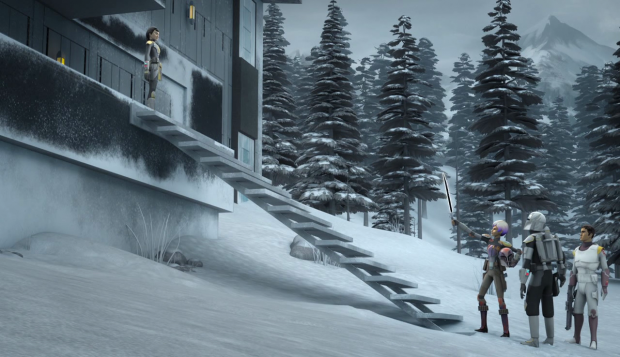 She’s spoken so often about the difficult relationship with her family. This gives her return to see them an importance and a large foundation to build upon. It could have been that she was a teenager, angry at her parents, and that the view we have of them so far wasn’t the whole truth, coloured by her perspective. Equally, it could have been exactly as Sabine described and in fact has gotten much, much worse in the intervening years.

Whether you’re aware of the Mandalorian background plot or not I’d say you were treated to a great description of them in the early episode. The ruling residence is a spartan place that reflects the harsh nature of the people. The magnificent picture of Sabine’s mother shows the people’s power whilst the cold, stone throne that sits beneath represents their hard practicality. Then also is their immediate hostile reaction to the presence of Jedi after Ezra’s usual less-than-calm response in the first meeting.

And all of this well sets the scene for the explanation of why things are the way they are with Wren family, nicely showing the difficulties faced by ruling families and importantly why they don’t get to be nice people. The father is a hostage of the empire, forcing the family to serve on pain of his death. Sabine’s brother Tristan has to serve in Gar Saxon’s elite unit to prove his family’s loyalty to Mandalore. 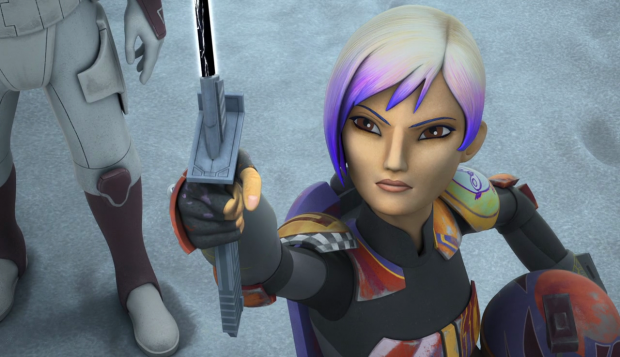 Sabine may well have saved her people by betraying them and running away but her actions have had some terrible consequences for her family and her mother has been left trying to keep the family alive in the wake of them. It is no wonder she acts with such hostility to her daughter’s return given everything she’s had to do just in the name of survival.

The two scenes that play out the family’s resulting frustration but also their remaining love are a joy to watch.

The mother-daughter argument definitely shows us an angry teenager facing off a suffering mother in some moments whilst also presenting the real reasons why the two individuals were both right to act as they did. In the end they’re family and though distanced by each other’s choices come together in respect. I think this piece of writing was one of my favourite parts of the episode.

I wasn’t quite sure what the brother-sister scene closely following was going to accomplish, given that the family problems had been so well covered already. However, it turned out to be very important in showing us the family’s frustration with their current  problems and Sabine’s choices – a quick make up was never going to be an option for them. 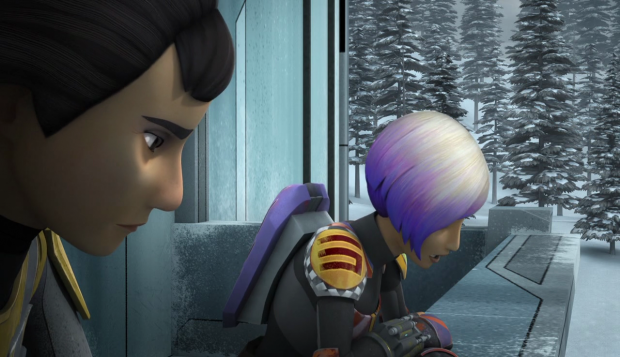 I definitely appreciated the skill with which this episode was put together. There were still the things that we’ve come to enjoy throughout the series, such as the artistry. Krownest is such a pretty place for example, many scenes of which could easily be a picture on your wall. But also generally the plot developments come at just the right moment where they advance the story at a good speed without jumping too far.

The possibility of the mother’s betrayal seemed to be just deep enough. She needs to betray the Jedi to keep her people safe from the empire but she wouldn’t hand over her daughter.

Fenn Rau’s timely appearance before the throne-room battle was just that: timely. It didn’t just seem like he waited for the purpose of making an entrance or just to heighten the tension. It seems believable that he didn’t interrupt earlier because he would need to see if the politics could sort out the problem first. It didn’t, so then he joins the fight.

Even the saber duel at the end developed naturally. Lots of things needed to happen this episode for plot purposes. Sabine needed to fight Gar Saxon for the Darksaber to prove her worth to wield it in front of her  people. There also had to be some threat that her family might turn against her to create some tension in the episode. These requirements can be difficult to write, as you then need a reason why Gar Saxon can believably get his hands on the Darksaber – why would Sabine give it up? And then there needs to be a reason the duel happens without interference. 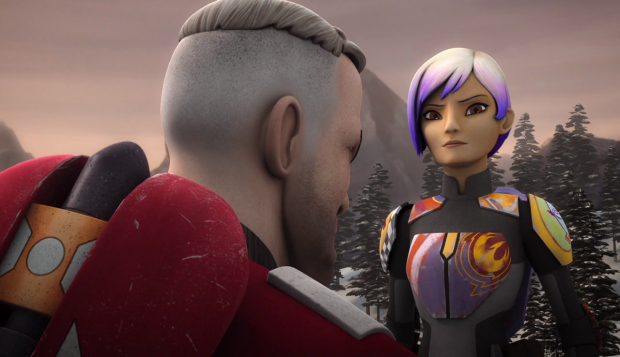 Generally speaking then, I’d say these problems are deftly handled. I think I’d say that the moment Tristan looks like he might shoot his sister is a bit cheap, as that was never going to happen and it didn’t seem to gain him any advantage over the enemy in terms of time or position. The shooting of Gar Saxon was also a little bit seen-it-before – you know: hero chooses not to kill the bad guy; hero turns back on bad guy; bad guy goes for revenge and is then killed.

That said though, it wasn’t badly done and it capped the episode well: Sabine’s mother got to declare her position by saving her daughter and more importantly we see the pat of Mandalore itself in Sabine’s action. She wins the right to decide Mandalore’s fate in a traditional duel but then declares that her people will tread a new path but not exercising her right to kill her defeated opponent. It’s what we’ve come to expect from Rebels: meaning and purpose in character choices.

I’m intrigued to see how Sabine’s choice to find another wielder for the Darksaber plays out though. Presumably she’s not being written out of Rebels and we’ll see more of the Mandalorian people’s rebellion but I can’t predict how this will happen. 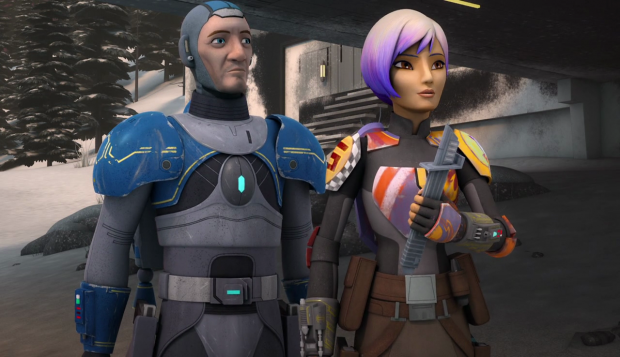 Who will wield the Darksaber then?

Loved this episode. Not only does it develop the rebellion plot and show us some interesting development for a supporting character, it also manages to do so with the main cast in a useful supporting role. Supporting characters can often get a role like Chopper did this episode but Ezra’s impatience and Kanan’s wisdom are played in perfect tandem to Sabine’s adventure.

Add this together with some excellent structuring that both introduces Mandalore’s people and pulls the plot along at a Goldilocks pace and you’ve got an episode that might be one of the best of the season.

Oh, and by the way, I forgot to say: this is Aaron covering for Craig this week, should you have noticed a different style here. Sorry, should have said earlier. Craig’s covering the Glasgow Film Festival but will be back next week.