Star Wars Rebels sees the Rebellion begin the liberation of Lothal with a daring fighter assault on the planetary blockade.

First of all I have to address just how late this review is. It was always something I meant to get around to and it kept slipping further down the list until the point where it’s after the post hiatus return. Due to other review commitments I’m taking a more “whenever I get around to it” approach to reviewing this show and I plan to be up to date within a week of this being posted. Apologies to anyone waiting for these reviews but changing circumstances and a hefty workload meant that this kept slipping. 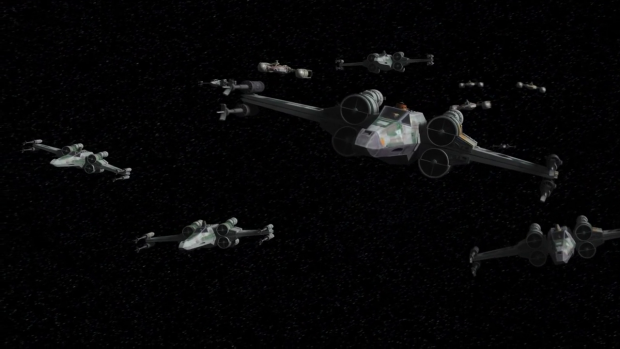 The opening of this episode provides fans with something they’ve always wanted to see; Hera in an X-Wing. Arguably it’s pure fan service but it also serves an important purpose in the story which is ultimately the best kind of fan service. It’s a fast paced, exciting and coherent action sequence that makes very good use of Hera’s piloting skills combined with her tactical prowess. As always the Empire has superior numbers which makes them the most formidable side simply because there is far more fire power to throw around. Thrawn also leads the charge and immediately recognises that Hera is leading the attack. As always Thrawn approaches the situation with a calm head and casual confidence. Even when Hera breaks through the enemy lines he retains his composure. The antagonistic relationship between Hera and Thrawn has always worked well because it’s clear that Thrawn respects her as a combatant and Hera definitely fears him. As such she always brings her best when taking him on and is uniquely challenged by him.

Following the X-Wing assault the episode shifts gears into a more clandestine fear based plot where the survivors have to use their wits to survive as the Empire looks for them. It’s not as exciting as the opening sequence but has merit in its own way as a more tense collection of scenes. Lothal is far from the welcoming and homely location it has been previously. Under Imperial control Lothal is cold, uninviting and dangerous. In recent episodes Lothal has become a conquered world with the Empire strangling it for resources. As I’ve mentioned before the most formidable thing about the Empire are the resources. They can simply keep throwing things at the Rebellion until they have nothing left or be an all consuming presence that’s difficult to hide from. This episode showcases the Empire’s resources being something that Hera and her small group are ill equipped to deal with so every second on Lothal becomes a struggle for survival. This is reinforced by some of her fellow Rebels falling victim to the Empire clearly indicating that Hera won’t be far behind if she doesn’t figure out an escape plan. 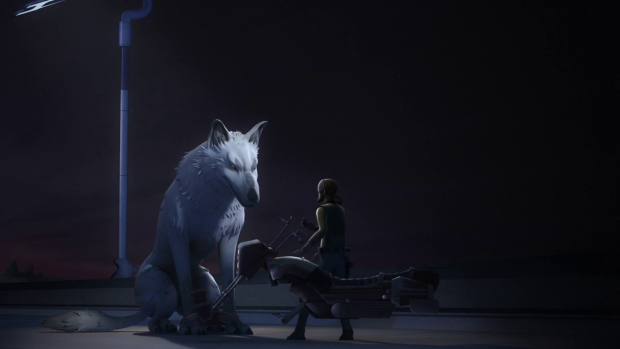 Elsewhere the rest of the Ghost crew are sabotaging Imperial guns which is all pretty standard as far as this show goes. It’s pretty much busy work to remind us that these characters exist and are still relevant without giving them anything meaningful to do in the context of the story. The exception to this is Kanan who is still fixated on the goodbye kiss given to him by Hera in a previous episode and is fuelled by determination to save her. Ultimately he chooses to go after her to the possible detriment of the rest of the group. Ezra understands how much he cares about Hera and supports his decision to leave which is as expected but I would have liked to see others in the group object to make his departure a bigger deal. One thing this show fails to do consistently is consider the bigger picture relative to the choices of the characters. Going back for Hera should jeopardise the mission because he isn’t going to be around to increase its chances of completion so this should be addressed. In context of the Rebellion Hera isn’t that important so Kanan’s personal feelings and his priorities should come under scrutiny in some way.

This episode furthers the mysticism present in recent episodes when Kanan encounters another Loth-wolf who utters his name. I always like the mystical side of Star Wars and this show has always been good at exploring that. With this show approaching its end point it’s intriguing to contemplate how this will play out and what part Kanan and Ezra have to play in all of this. For now the mystery has been compelling and eerie in all the right ways so it remains to be seen if this show can stick the landing. 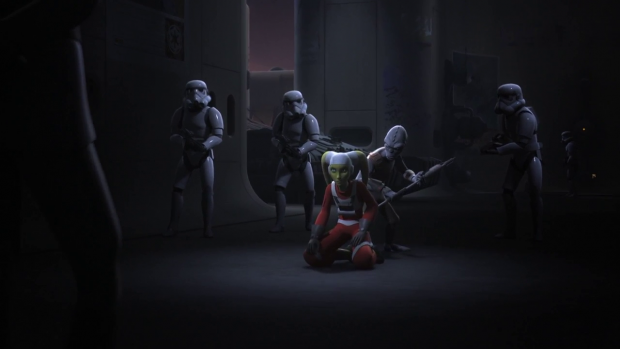 Lothal is a very dangerous place

A solid episode that delivers some impressive fan service in the form of Hera piloting an X-Wing during a really impressive sequence where she outwits Thrawn enough to get onto Lothal. The cost is significant because Thrawn is formidable and the Empire have superior numbers but Hera’s tactical prowess is evident once again. Shifting gears to a more tense fear based plot where Lothal becomes a terrifying and unwelcome location under Imperial control. The stakes remain high thanks to the loss of some of her group and the situation is clearly grim.

Kanan and his group’s activities are less effective as plot points because they come across as very mechanical with the exception of Kanan’s fixation on saving Hera. Ezra understands his reasons because of who he is but it’s bizarre that there aren’t any objections to Kanan abandoning the mission because of his personal feelings. This show has never been good at appreciating the bigger picture relative to the actions of the characters. Kanan abandoning his mission to save one person should be a big deal because he is compromising a huge operation for emotional reasons. The mystical side of the plot remains compellingly mysterious but it remains to be seen whether the resolution of this will be equally interesting.