Star Wars Rebels takes a break from the mythology of the force and focuses on the rebellion’s war against the Empire.

The premise of this episode is that the Rebellion needs pilots and they get wind of some that are ready to defect as long as they can be extracted from an Imperial training academy. Sabine is sent in to be the inside woman and free the pilots. 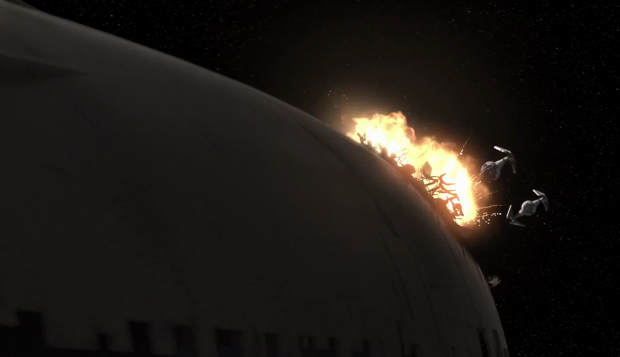 Dark days for the Rebellion

It may sound familiar as pretending to be a cadet was already done in the season 1 episode “Breaking Ranks” but the episode does enough with it to not feel like a copy. It is riddled with some clichés like the fake ID not working first time and false jeopardy that is obviously a simulation but it is an able showcase for Sabine and provides her with some great moments.

One of the pilots is none other than Wedge Antilles (Nathan Cress) and another is Hobbie (Trevor Devall); both are characters that fans will recognise from the Original Trilogy so bringing them into this show helps make it feel more like part of the Star Wars universe. Not that it was slouching on that front before but using familiar characters in ways that enhance the story is definitely a good way to reinforce that.

Wedge has more focus than Hobbie who seems to just be along for the ride. We get a quick round-up of his motivation to defect and it’s a fairly simple one. He joined to be a pilot and then quickly found that he didn’t agree with the Empire’s methods so decided to get himself away from that. It may be typical but sometimes motivations don’t need to be complex. Wedge is simply a good person who wants to do a good thing. 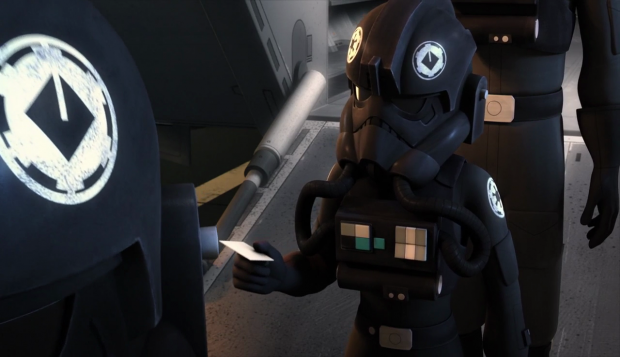 The simulation sequence where Sabine and Wedge were paired up to patrol for Rebel ships was a good way to set this up. I like that the episode didn’t rely on audiences recognising the name Wedge to fill in any gaps in his character. This sequence shows us that he’s a skilled pilot and has a bit of personality that immediately appeals to Sabine. His hesitant reaction to the order to destroy the disabled Rebel ship also tells us a lot about his morality.

Ordering cadets to break protocol and destroy a disabled Rebel Ship instead reinforces the Empire’s change in tactic to a zero tolerance approach when dealing with the Rebellion. This began when Darth Vader came in to deal with the problem and seems to still be the policy.

Kallus and Pryce arriving to investigate the potential defectors upped the stakes nicely and further developed Imperial villains that we are familiar with. I have often mentioned that Kallus is pretty incompetent and it’s a surprise that nobody has realised it but having him here expands on him questioning his morality back in season 2’s “The Honourable Ones“. It’s clear that his time with Zeb has changed him and he helps the prisoners escape before stating that his debt to Zeb has been repaid. His conscience is definitely bothering him and maybe he feels like this will absolve him of any guilt. It will be interesting to see Kallus’ reaction to the Ghost Crew when he next encounters them. 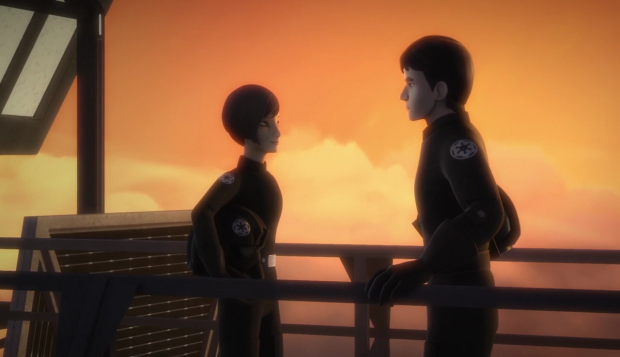 Sabine and Wedge are good people

Pryce has no issues with her conscience. She is more than happy to torture people for information and seems to revel in the cruelty her job allows her to inflict. She’s a little one dimensional as villains go but as an avatar for the values of the Empire she does her job nicely.

The fight between her and Sabine was incredibly well done. Most of the fights between characters in this show use lightsabers or blasters so it’s good to see two highly trained people simply duking it out and have it work so effectively. Sabine declaring that her “clan taught her better” before winning was a great moment for her and shows just how skilled this character is.

In another great moment for Sabine she gets to save Wedge and Hobbie who were planning to escape and rescue her. Sabine’s delivery of “That’s cute” was perfect. This character has so much potential that the show rarely uses so it’s refreshing to see her potential used to its full extent here.

Another thing I found effective is how desperate the Rebellion seem to be at this point. Their losses at the beginning of the episode are extensive and by the end all they have gained is two new pilots. It seems like a disproportionate victory that doesn’t dent the Empire in any significant way. There are signs that the show is heading for a really dark period for the Rebellion and so far the way that they seem to take what they can get while losing a lot has an air of tragedy to it. 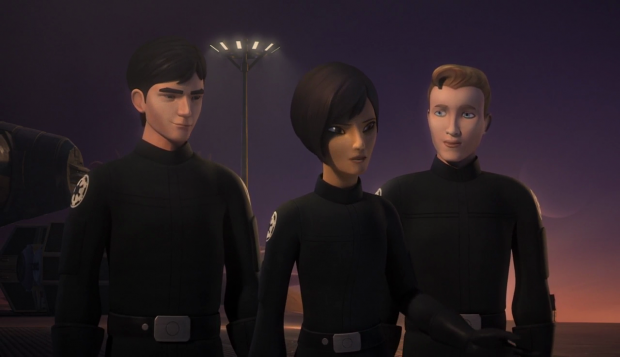 A well put together episode that proves to be an great showcase for the underused Sabine. Introducing Wedge and Hobbie was a good move that works really well in cementing this show into the Star Wars universe while using them in a way that works for this show. There is also some development for Kallus in a follow-up to his adventure with Zeb last season. There are some clichés in this story but it doesn’t bring it down too much.