“The Holocrons of Fate”

Maul makes his return in the latest Star Wars Rebels with a plan to unite the Jedi and Sith Holocrons. Doing this can provide pretty much infinite knowledge.

Naturally Maul having infinite knowledge can’t be a good thing but the implications of it are interesting. Maul’s plan is a mystery so it’s unknown what he would do with infinite knowledge. I suppose for now it’s fine just to have him as a recurring threat for the ghost crew. 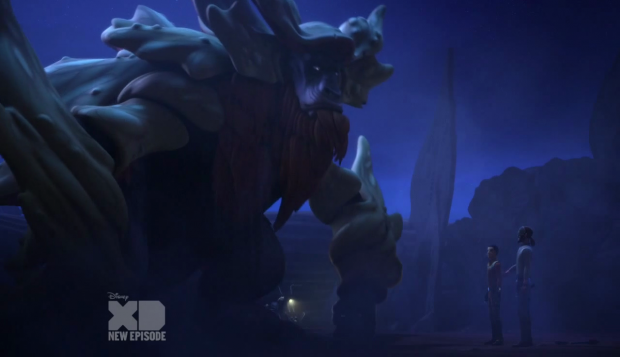 As villains go he has somewhat lost his touch. He easily captures the Ghost crew but they aren’t the least bit afraid of him. They immediately try to escape and don’t seem to be all  that concerned about his considerable powers. Even when he seems like a huge threat to them when they confront him there is never the sense of jeopardy that their should be. As amusing as it was to see the Ghost crew prove themselves to be a nuisance for Maul it would have been better for him to be a more threatening foe.

To Maul’s credit his threats are far from idle. He immediately tries to kill Kanan and orders the death of the Ghost crew once he has what he wants. He definitely can’t be trusted at any point and I like that excuses are never made for why he constantly leaves them alive.

In theory this forces the Ghost crew to be much more competent as they are dealing with a foe who has absolutely no morality to speak of. The execution wasn’t quite there in this episode but the underlying message of Maul being an opponent who would never go easy on them comes through clearly. At least the Ghost crew don’t simply accept captivity and already assume that Maul won’t be true to his word.

Some of the attempted escape sequences were entertaining such as hearing Maul stomp around on his metal legs. They make him easy to track and they are used to magnetise him to the ceiling. He is able to get around this easily so there is back and forth that does work well. Much of it is played for laughs which does undermine the threat level a little but it is entertaining to watch. 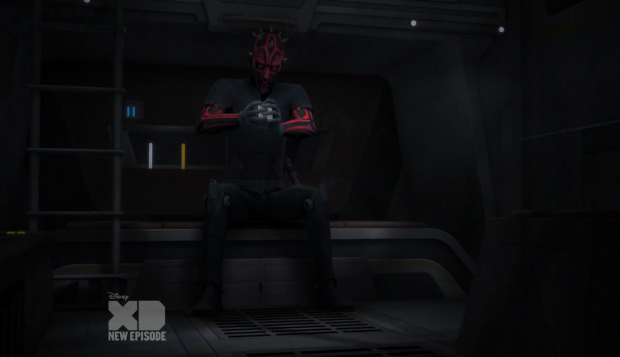 There were some strange choices when it came to the action such as Kanan surviving being blown out into space. Contact with the vacuum of space should have been instantly fatal rather than the minor inconvenience it seemed to be. I know that the Star Wars universe isn’t all that concerned with realistic physics but this really stuck out at me.

Ezra and Kanan’s role in the story amounts to finding the Sith Holocron so that they can make an exchange with Maul for the release of their friends. This takes them back to Bendu who has hidden it in an ominous cave for protection.

Bendu is very much cemented as a Yoda-like figure in this episode albeit far larger than the tiny Jedi. He is able to offer advice when needed and often has just the right information to apply to a given situation. Tom Baker’s quirky line delivery makes him stand out as having a different sense of humour to Yoda but the parallels are easy to draw. It’s not a problem so far but it’s entirely possible that Bendu could take on the role of simply having the answer that moves the plot along.

Like Yoda he has an ominous cave nearby but I found this part of the episode fairly weak. As funny as Bendu’s line about either finding peace or being eaten was it all felt very underwhelming. It did allow Kanan and Ezra to get to the root of the personal issues they are having but even that seemed too easy. It all boils down to Ezra feeling bad for Kanan going blind and Kanan not blaming him for it. That’s about it and I’m guessing we’ll hear no more about it after this episode. 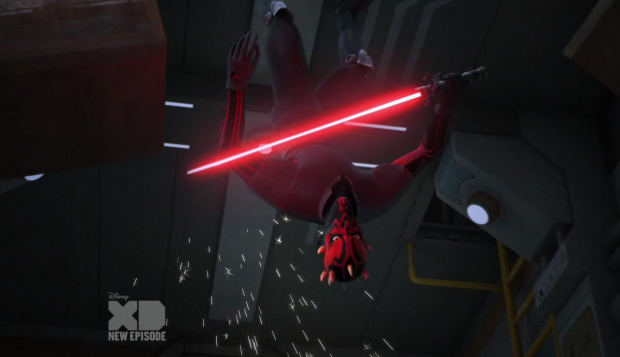 Once the Holocrons are brought together we get some pay-off to the discussion of knowledge earlier in the episode. Ezra and Maul both see things that are vague and will definitely become important later. “Twin Suns” are mentioned and Maul flies away pleased with the fact that “he lives”. Surely this must be referring to Obi Wan Kenobi who is currently on Tatooine.

Given that Maul seeks revenge for what Kenobi did to him it doesn’t seem possible that it could be anyone else. Is it possible that we will see a visit to Tatooine in the future that will result in a final confrontation between Maul and Obi Wan? The show would need to tread carefully on that one but it wouldn’t necessarily be a bad thing.

The bringing together of the Holocrons creates other problems for Ezra who has now had access to so much knowledge. It was been established that he is flirting with the Dark Side so it’s possible he’ll want more until it gets to the point where it’s more than he can handle. It’s also possible that Ezra will find a way to use both the Light and Dark side to find a balance between them. This would fit with what Bendu talks about and would be interesting to see.

Maul’s relationship with Ezra is also interesting. He considers Ezra to be his apprentice and refers to him around Kanan as “our apprentice”. It seems that Maul will have some sort of hold on Ezra as time goes on but he definitely sees Kanan as a threat to his goals as shown by his persistent need to get rid of him. This is a dangerous mindset for Ezra to be exposed to and at this point his journey could go either way. 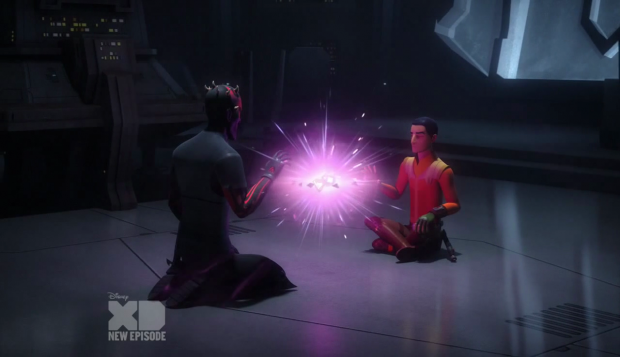 An interesting episode that furthers the mysticism of the force in different ways. It’s possible that Bendu could be a 2 dimensional character who simply has the answers they need at a given moment. It’s also possible that Maul could be seen as a comical villain who is easily thwarted on each encounter. At least the threats he makes aren’t idle and the Ghost crew have to show competence in order to survive but he could still slip too far the other way. At least the attempted escape sequences are entertaining.

Ezra and Kanan working through their personal issues doesn’t work very well as the sentiments are far too simple. Seeing the Holocrons brought together and the hints at the future appearance of Obi Wan Kenobi are interesting though and I look forward to seeing what further effect this has on Ezra.