Star Wars Rebels becomes an episode of Star Wars: The Clone Wars for a week when a battalion of still functioning Battle Droids are found.

Saying that this show became another show for one week is a really simplistic description but it is actually fairly accurate when considering what went on here. Star Wars: The Clone Wars has an enduring legacy as well as a lot of fans that feel upset that the show stopped before it could truly end. Since some of the writers and producers now work on this show it makes sense that they would want to create some kind of bridge between the two shows to develop some of the stories that went unfinished. 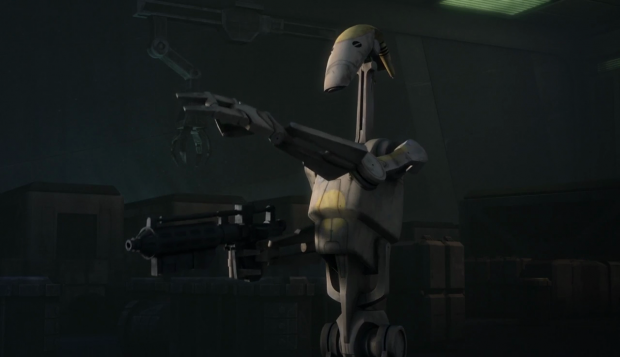 A relic of the Clone Wars

Star Wars Rebels has been doing that more and more since the second season with the reintroduction of Rex, Ahsoka and Maul as well as other things here and there that tell us that this show is in the same universe but set at a different time. I’m all for it as I enjoyed The Clone Wars and want to see how certain things ended up plus it helps me be more invested in this show since it brings elements from the previous show that I also enjoyed.

This episode allows the influence of The Clone Wars -both the show and the period in fictional Star Wars history- to take over and come to some form of resolution. Rex is at his most interesting here when he displays shades of PTSD showing that he tries not to think about the War he was bred to fight, at least not in great details. Encountering Battle Droids  is difficult for him to process as he thought that part of his life was over and clearly doesn’t associate the Rebellion as being the same thing.

Observations are made about the situation he’s in now. Back in the days of the War he was used to fighting alongside an army of troops with highly trained Jedi leading them against another army of troops rather than the scrappy and untrained forces he has allied himself with now. Kanan and Ezra are hardly shining examples of discipline and tactics and the Rebellion are vastly under resourced. Rex realises this and still struggles between calling Kanan General, Sir or simply Kanan. In his head, the Clone Wars never ended and he has trouble resolving that when such a powerful reminder is put in front of him.

The whole setup is on paper a good one. When looking for weapons that can help against the Empire Rex, Kanan, Zeb and Ezra encounter a Battalion of Battle Droids who challenge them to a last battle to decide once and for all who is superior. 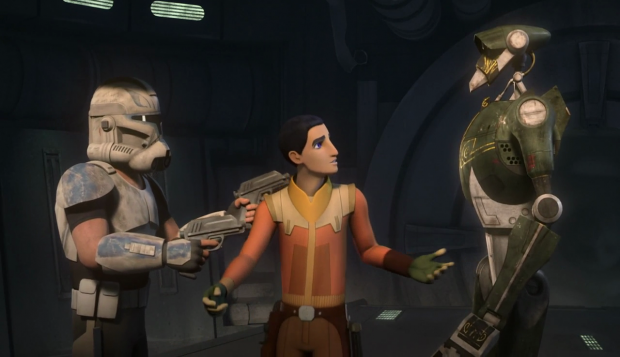 Coming to an agreement

In practice it doesn’t entirely work as the action sequences are clunky and confusing while feeling like levels in a video game. An emphasis on tactics and outsmarting the enemy would have made this worthwhile but having the droids be defeated because they’re old feels like a bit of a cop out.

There are some interesting elements throughout when developing Rex’s PTSD. He seems to be almost possessed by the uncomfortable memories of living in constant conflict. It definitely distracts him throughout and he lashes out angrily at Ezra for not following orders which endangers their survival. Ezra is definitely reckless and undisciplined but Rex’s outburst is a harsh one and allows Ezra to make the comment that Rex is acting like the Tactical Droid, Kalani (Greg Berger) who is fixated on the old days of the Clone Wars.

Kalani is a mirror for Rex and another relic of the Clone Wars. He and his droids are still around because they refused to accept the shut down order as probability suggests that it would be a Republic trick. They are essentially still at war with the Republic since their programming doesn’t allow them to let go. Rex is similar even though his programming is biological.

Once Rex, Kanan and Ezra reach Kalani he refuses to concede because he decides that the Droids would have been victorious if they weren’t old and were less effective as a result. Surely if he believed that to be true then he would never have challenged them in the first place. 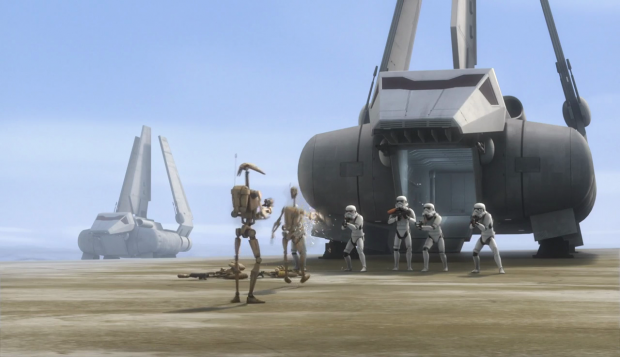 It does allow Ezra to make an interesting point about the Clone Wars and how pointless a conflict it was. Rex and Kalani both have the same problem. They were fighting a War that was impossible to win because Palpatine was manipulating both sides so that he could create the Empire. Rex put everything he had into the War and the result was the Empire so it’s hard to believe that he was fighting for the right reasons. Ezra’s logic helps them both realise that they were both manipulated in the same way and Kalani is able to conclude that the Republic became the Empire so they are now at War with the Empire which puts them on the same time.

These are all good points and frame the conflict in an interesting way but there was some clumsiness to the conversation such as Ezra patronising Zeb by asking him how he figured out that the Empire really won the War. Considering he has lived in this world and seen how it has changed then how could he not? How has everyone not realised this?

Despite that, it’s interesting that there is no closure for the Clone Wars and that closure is achieved by the Clones -represented by Rex- and the Droids -represented by Kalani- finding the middle ground and putting the conflict behind them. The Empire is a good reason for them coming together as they symbolise the futility of the Clone Wars in the first place.

It’s great to see them work together and an interesting novelty to have Battle Droids going up against Stormtroopers. The reference to the Battle Droids lacking accuracy in their shooting was a nice joke and doubly clever that it became a plot point. 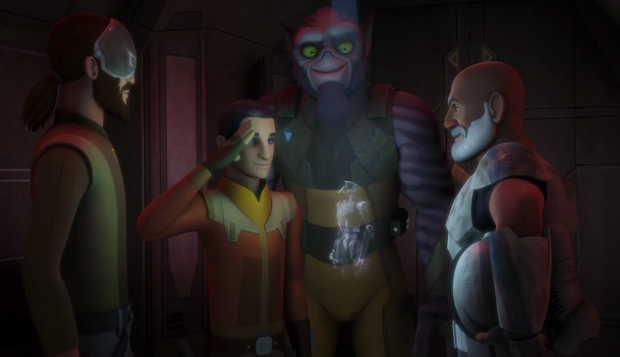 The final thought at the end of the episode about how Ezra ended the Clone Wars was too much. Just because he made a small group of people and Droids on opposing sides work together doesn’t mean that an unresolved conflict is suddenly resolved. I feel that this was trying to hammer the point of cooperation home which is fine but this was beating the audience over the head with it. It should have been left at the Clone Wars never truly ending and being pointless in the first place.

A good episode that falls over in certain places when trying to get the message across. The exploration of Rex suffering from PTSD and struggling to deal with a reminder of the Clone Wars was really well done. Ezra’s point about the Clone Wars never truly being won and using that to convince the Battle Droids to help them escape was really strong as well and bring in an interesting perspective on the various conflicts in this universe. Rex telling Ezra that he single handedly ended the Clone Wars hammers this point home a little too obviously but it was still interesting. It was also great to see Battle Droids taking on Storm Troopers.