Star Wars Rebels returns to Lothal to let Ezra attempt to save his home and complete the arc started last season.

Lothal has been an important part of this show since it began. It’s Ezra’s home, it served as a base of operations of sorts for the team and ultimately it’s the place that brought them all together. One thing this show did really well in the first season was establish Lothal as a place to call home and gave it its own character that puts it up there with all of the classing Star Wars planets. I see it as being easily as iconic as Tattooine or Hoth and I’d stand by that statement. 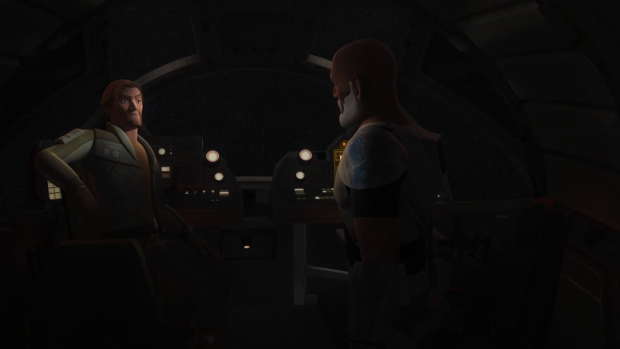 The next odd couple

An interesting thing about it is that it’s not a terribly special location in the grand scheme of things. It’s not strategically important nor does it contain much of value for either side. The Empire still saw fit to occupy it and it is something that’s on the radar of the Rebellion though far from a priority.

For Ezra, Lothal is everything. It’s his home and he feels a special connection to the place as well as the people in it. He is the one championing the notion of freeing it from the Empire and he is practically haunted by the promise he made to return to help. It’s a good setup for the episode that keeps Lothal in the DNA of the show and immediately offers personal stakes for Ezra. There is also an audience connection to the planet that is instrumental in making this story work. 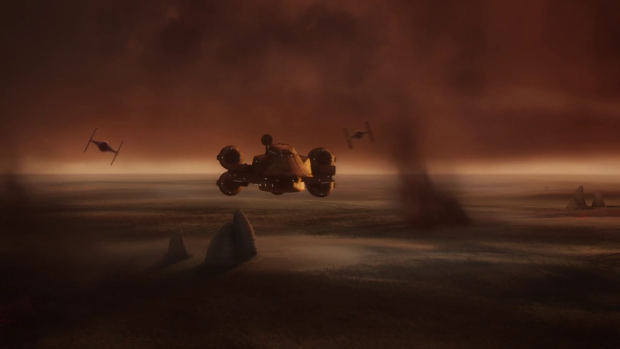 Lothal sure has changed

The return to Lothal is really jarring. It is shown to be in ruins after brutal Imperial attacks and very much presents the appearance of a dying planet. Ezra’s reaction is as you would expect and Taylor Gray does a wonderful job portraying the pain in Ezra’s voice. There is also a great deal of commitment and determination in there so Ezra’s range of emotions in this episode is complex as shown when he has a really profound moment of self doubt where he seems prepared to admit that Lothal is a lost cause and that Saw Gerrera was right about it. This isn’t something he actually means and Sabine is there to help him come to his sense thanks to the aid of the symbol painted on the wall indicating that there is some hope. Sadly Ezra’s sense of doubt isn’t something the episode spends enough time on and it feels a lot like it is being crammed in just for him to have something to overcome. Ultimately the crew are reunited with Ryder and Ezra is ready to work to save his planet once again.

Strangely, Ezra’s connection to the Force barely comes up. It is mentioned at the beginning of the episode when he has a dream or possibly a vision of Lothal that may or may not pay off but there is no mention of keeping control of his emotions or remembering his training which is bizarre as it feels like something that Kanan would remind him of. Some form of meditation might help him deal with his out of control emotions. It feels as if the potential for Ezra to fall to the Dark Side has all but been forgotten though there are a few episodes left before this is all over.

It’s a huge risk for the Ghost crew to return there as they are all top of the wanted list on this planet so there’s a sense of claustrophobia to much of the episode as there is the constant sense that the Empire are closing in on them. The way this is handled is somewhat uneven as some of the episode is focused on building tension where other scenes feel almost comedic such as Ezra and Sabine wandering into a bar and meeting Baron Valen Rudor (Jonny Rees) which results in being bailed out of being caught by Storm Troopers by Jai Kell (Dante Basco). It’s an odd scene that doesn’t seem to fit the tone of the rest of the episode but does succeed in moving the plot forward.

This leads to an impressive yet overlong action sequence in the sewer that makes really good use of the unforgiving maze like claustrophobic environment. There’s a real sense that the characters are cornered and always in immediate danger. Using the Storm Troopers combined with Probe Droids is a really nice touch as it varies the threat and keeps the characters outnumbered.

The action also features some smart decisions by the characters such as cutting the ladder once everyone starts climbing it to delay the pursuit of them. I’m always pleased with small touches like that as it shows that the characters are using their experience to react to the situation.

There are some notable moments not connected to Ezra such as the quick beat between Hera and Kanan where they lament never having time to focus on their relationship. The scene they share is very intimate and filled with a shared sense of regret. They are both committed to the cause but would also like to have some time to spend together. It’s a nice tender moment that the show doesn’t have enough of.

I also really liked the scene between Rex and Kallus when they argued over who was left in charge of the Ghost in Hera’s absence. There is the makings of a fun buddy episode involving these characters and I like that Kallus has managed to fit in among the Rebels after his defection last season. 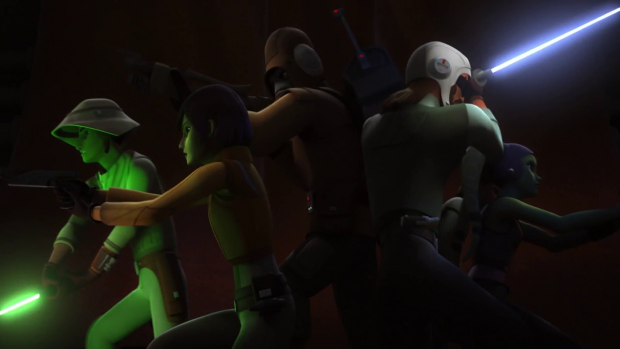 A solid episode that explores the personal connection Ezra has for his home. His reaction when he sees what the Empire have done to it hits the right emotional beat and the general environment is really uninviting. The characters find themselves constantly at risk and there is even a moment of self doubt for Ezra that doesn’t last as long as it really should. The lack of mention of his Jedi abilities is somewhat baffling as this would be an ideal time to be reminded of the importance of emotional control.

The episode boasts an impressive if overlong action sequence that keeps the threat varied and constantly has the characters facing up against superior odds. There are also smart decisions made such as cutting a ladder to delay pursuit so the action was well thought out. The handful of character beats outside of Ezra such as Kanan and Hera’s intimate moment as well as Rex and Kallus arguing over who commands the Ghost in Hera’s absence were well done.