Star Wars Rebels tries for another “haunted house” story when Hondo brings them to a derelict ship containing weapons that will be useful for the Rebellion.

Supply runs seem to be to the go to story catalyst this season which makes sense given that the Rebellion are at their weakest at this point. This constant need for anything that will give the Rebellion an edge against the Empire helps build the theme of desperation that this show is definitely trying to create. 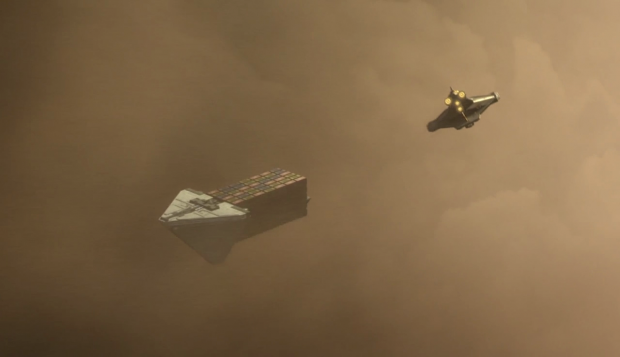 The problem is that most of the supply runs don’t end with any significant increase in supplies or weapons. They come away with something most of the time but it doesn’t really seem to be worth the effort. This would be fine if the show was addressing this with the characters starting to lose hope but so far the point hasn’t really been made.

Another thing that isn’t being directly addressed is Ezra’s behaviour this season. He is older than he was last season and is becoming more reckless while also being tempted by the Dark Side of the Force but the handling of this has been clumsy at best.

This episode does attempt to address it when Hera puts Zeb in charge of the mission to stop Ezra being sucked in by Hondo’s persuasiveness. She needs a clear head in charge so Zeb is the natural choice but Ezra gets really stroppy about this while making snide comments about Zeb as a leader. This doesn’t really suggest that Ezra is going towards the Dark Side, all it paints him as is a spoiled child who doesn’t like that he isn’t getting his way.

Ezra never seems to learn the necessary lesson about trusting Hondo. He does lose a bit of his admiration such as when Hondo seems to casually accept the loss of his partners but he doesn’t come to the level of realisation that he should about Hondo being unreliable and dishonest. Ezra is being written as immature and stupid to further the plot. This is made worse when Kanan defends him by telling Hera that Ezra needs to learn about Hondo on his own. This is something I completely disagree with considering these missions have very high stakes for the Rebellion and lives could be lost. There isn’t time for Ezra to learn hard lessons the natural way. I wonder if Kanan is also suffering from thematic blindness when it comes to Ezra as well as his literal blindness but this isn’t something that is being developed either. 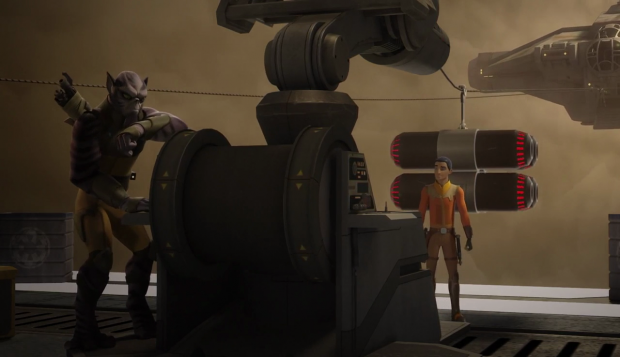 Zeb as a leader turns out to be a great idea as he constantly keeps the mission in the front of his mind and has a zero tolerance policy to people not obeying his orders. Things only go wrong when he doesn’t have enough information to react to. Zeb is never given credit by the episode itself or Ezra which is a shame as there should have been a moment where Ezra realises that his behaviour is damaging to the team and apologised for the comments he made. This would be actual character development but the show doesn’t seem to be all that interested in that when it comes to Ezra.

Lots of these flaws are made up for by the execution of the action sequences. They were really tense and exciting to watch while also being very inventive when put against the backdrop of the crashing ship. There was a lot of variety to what was going on and the characters were mostly well used. My one gripe is that I don’t feel the sentry droids were a suitable threat for Zeb or Ezra but the escalating situation was definitely handled well.

Hondo is a character that I’m never really going to like because I find him incredibly annoying. I don’t understand what makes him persuasive and I find his antics incredibly irritating. It makes me wonder how he has survived this long and his frequent returns usually mean a less than stellar episode. This is one that doesn’t entirely work and most of that can be attributed to Hondo.

At one point it seemed like the episode might go down the Haunted House route with the Sentry Droid hunting them down one by one but it was such a small part of the episode that it marks a missed opportunity. All of the ingredients were there from characters going quietly missing to the solitary figure stalking them slowly in the corridors. Even the ship itself lent itself to this with all the creaks and dark narrow corridors. Since the episode never really tried to be this I can’t really count it as a negative but it does bear mentioning. 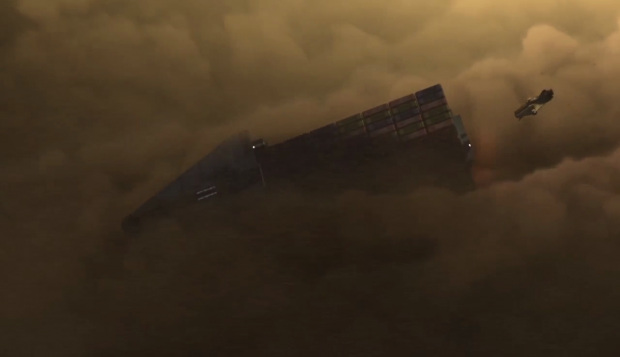 A problematic episode that fails to understand what the necessary development for Ezra should be. His stroppy and childish nature when making snide comments about Zeb’s leadership are completely uncalled for which would be fine if that was the development route the show was going down with his character and there was going to be some attempt to acknowledge that but it is never picked up and doesn’t pay off in any way. Zeb as a leader works really well as he keeps the mission in the front of his mind and the only problems are due to things that are entirely outwith his control. Hondo being around always makes for a problematic experience for me but this is somewhat saved by some brilliantly executed tense action sequences.