Kallus became a more interesting character when he revealed himself as Fulcrum because he went from being an incompetent threat foiled week on week to someone with added depth and complexity. Despite only having a couple of appearances since then, his dual role has made the ongoing Imperial threat feel a lot more urgent than it was before. 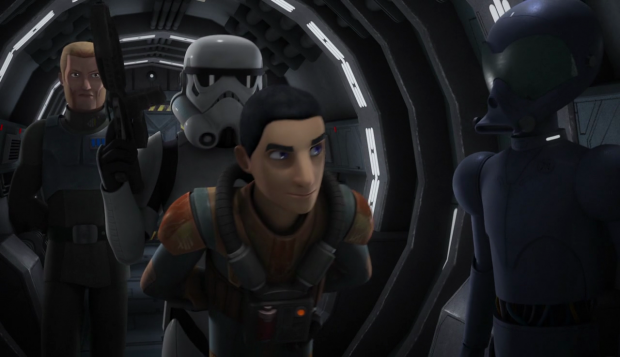 The episode opens with a really effective first person viewpoint of Kallus waking up as the claxons sound on his ship. It’ disorienting and different to what we normally see. It grabs the attention of the viewer immediately and sets up the story as having a different perspective than usual. It’s disappointing that the episode doesn’t return to the first person viewpoint but there’s no denying that it’s effective.

Using Kallus’ perspective for the episode is a really good idea as it gives us insight into the way the Empire approaches things as well as the mistrust that exists within their ranks. Everyone seems to be afraid for their lives and constantly looking over their shoulders. This makes complete sense for an organisation that has Emperor Palpatine and Darth Vader calling the shots.

Kallus’ big issue in this episode is that Thrawn knows there is a Rebel spy so he has to divert suspicion away from him. This is made even more difficult by Ezra engineering his own capture in an effort to extract Kallus before his cover is blown. Ezra’s heart is in the right place but his plan is misguided given how well known he is throughout the Empire. He doesn’t think it’ll be a problem but his face must be on a “Most Wanted” list somewhere. Maybe the average Stormtrooper won’t know his face immediately but it’s still a big risk that he didn’t need to take. Of course all of the main characters in this show are known to the Empire but Ezra putting himself on this mission wasn’t the best idea.

The episode doesn’t pretend that it was a good idea and Kallus calls him out on this almost immediately. Ezra being held prisoner creates complications for him because it is well known that Kallus has had dealings with him and his friends in the past. The lack of instant recognition will be questioned and it will make Kallus’ position more risky than it already is. 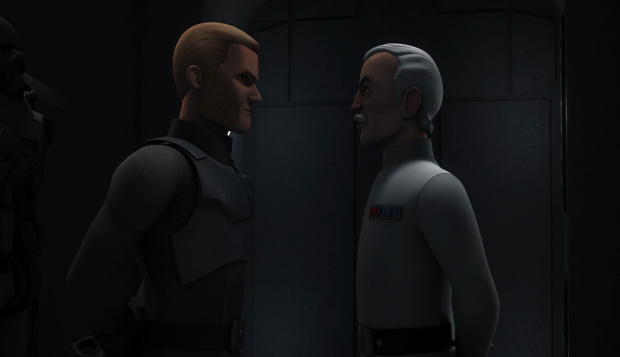 I like that this feeds into the overall plot of the episode as Kallus works to make sure this situation doesn’t end up blowing his cover. This involves him playing the other officers against one another to divert suspicion from himself and it’s really masterfully done.

Thrawn’s main objective is to flush out the Rebel spy by any means necessary and Kallus knows how clever Thrawn is -even if the audience don’t at this point- so has his work cut out for him. The first thing he does is implicate Lieutenant Lyste who was last seen during the events of “A Princess on Lothal“. His biggest mistake is that he seems to trust Kallus so finds himself easy to manipulate. Kallus is able to distract him by causing him to suspect Governor Pryce as the traitor while easily stealing his code cylinder to implicate him in Ezra’s escape as well as breaking into Thrawn’s office. Since his credentials are used in all of these instances it seems clear to the Empire that he is the traitor.

Thrawn is a lot smarter than that and sees right through it even if it appears that he doesn’t. In front of Kallus he acts as if the deception has worked but privately he points out that he knows all about Kallus’ true allegiance and has a plan to use that to the Empire’s advantage. The way he figures this out is a little convenient as he matches the artwork on Ezra’s helmet to a piece in his collection also painted by Sabine which calls out that Kallus didn’t recognise Ezra. He’s reaches these conclusions with very little evidence but it does highlight the “know your enemy” approach that Thrawn has been seen to take in the past as well as his overall intelligence. Thrawn hasn’t done much so far but seeing him show this level of intelligence goes a long way towards making him a formidable threat. It also highlights how foolish Ezra’s plan was if Thrawn is able to see through it so easily and draw further conclusions.

The episode was really tense and unnerving throughout. There was always the sense that Kallus might be caught and I have to applaud the writers for turning this character into someone that I find myself rooting for. The added depth given to him by his dual role has been really effective in making him a worthwhile character and David Oyelowo’s performance is strong enough to convey the added layers the character has. 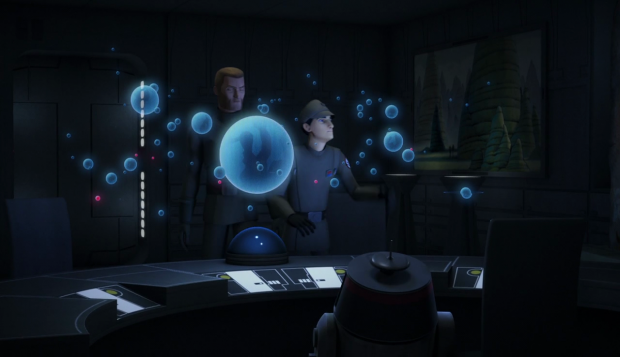 There were some notable moments such as Ezra and Chopper hiding in Thrawn’s office just after they had reprogrammed his holo-map showing possible locations for the Rebel base. The most obvious tension came from wondering if they would be caught in their fairly obvious hiding place but there was also the question over whether Thrawn had memorised the map and would realise something had changed. It’s entirely possible that he has realised this and is keeping it to himself but that would mean he would know exactly where the Rebel base is and would go there immediately. I also really liked Kallus’ use of the Assassin droids as a distraction and trying to pass it off as a genuine assassination attempt engineered by Lyste.

A major issue with the episode was the reappearance of Yularen (Tom Kane), a significant character back in The Clone Wars. I have no problem with him being back but this episode does almost nothing with him other than him him a sounding board for Thrawn. He doesn’t even seem clever as he admits he would never have suspected Kallus as being the traitor so I’m not sure why he would be used instead of just another nameless Imperial officer. It would be interesting to explore this character in the context of the Empire to find out where he stands on how the Empire operates and what generally motivates him but we see none of that here.

A tense and well constructed episode that makes good use of flipping the perspective to follow Kallus. Ezra’s rescue attempt was fairly misguided and turns out to be really damning for Kallus in the long run but the episode points out that his plan wasn’t a good one and creates complications for Kallus as he works to find a way around it without blowing his cover. The way Kallus plays the Imperial officers against each other and diverts the suspicion away from himself was well done and the twist of Thrawn seeing through that but not letting Kallus know shows how formidable a villain he is. There were lots of tense moments throughout such as Ezra and Chopper hiding in Thrawn’s office as he looked over the altered map. It’s unclear whether he had the map memorised or not.

The episode did have some flaws such as the appearance of Yularen who could have been replaced with any nameless Imperial officer with no difference to the rest of the episode. It’s good to have a returning character from The Clone Wars but nothing was learned about what he thinks of the Empire. He also didn’t come across as intelligent as he points out he would never have suspected Kallus. The episode could have done more with the mistrust between Ezra and Kallus as well. It did come up but not in the abundance it should have. 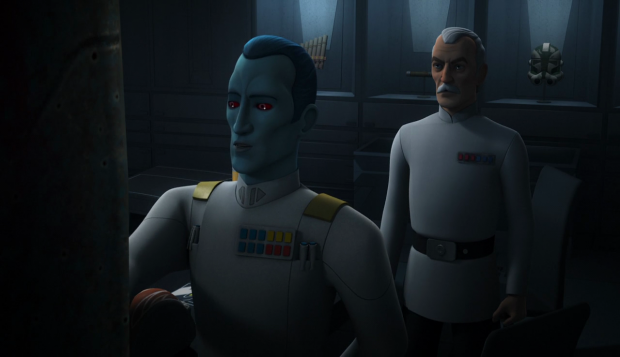