“Trails of the DarkSaber”

Star Wars Rebels returns to the Mandalorian story when Sabine is encouraged to use the recently found Darksaber to unite her people.

There has been a considerable amount of time spent on Sabine’s Mandalorian origins but up until now there has been little in the way of personal insight into what that means for Sabine. It’s a gap that needed to be filled and this episode definitely goes some of the way towards doing just that. 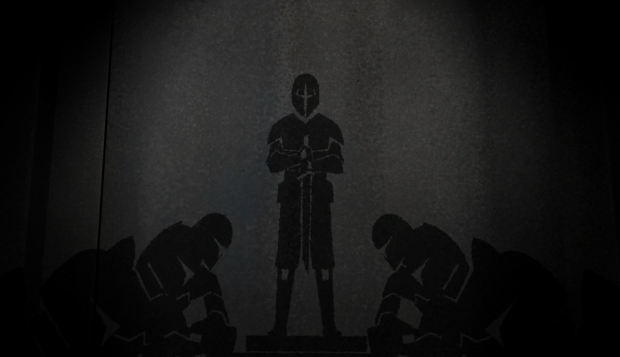 The history of the Darksaber

After the discover of the Darksaber back in “Visions and Voices” it was only a matter of time before it was dealt with in some way. It is much more than a different kind of lightsaber to the Mandalorian people and Hera wants Sabine to use it in order to unite her people so that they can help the Rebellion.

This is something that Sabine is very reluctant to do which Hera definitely understands. This is why Hera asks her to do it rather than making it an order. It might seem out of character for Hera but it also shows her strengths as a leader as well as a mother figure. Sabine reacts to this by reluctantly agreeing to give Hera’s plan a go.

Since the Darksaber is a blade very much like a lightsaber it’s down to him to teach Sabine how to use it. His approach to her is very different to the approach he took with Ezra last season. This is noteworthy for a number of reasons. Kanan feels that he has to take his time with Sabine because she isn’t Force Sensitive where Ezra is so his teaching technique has to be different in theory. He also recognises that his approach with Ezra was a flawed one so sees this as an opportunity to do things differently and therefore right.

Of course different doesn’t equal right and Kanan fails to recognise that Sabine is a very different student to Ezra for more reasons than her lack of Force Sensitivity. He assumes that he needs to take things slowly with her when Sabine is a much faster learner than he gives her credit for. His failings are a teacher are among the sources of her frustration throughout. 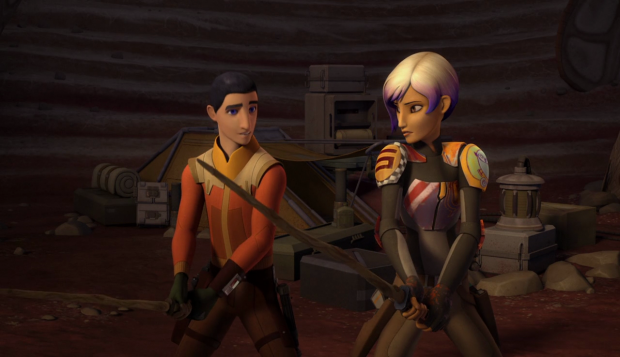 The most significant cause of her frustration is the fact that she simply doesn’t want to do this. Sabine has always been running from what she feels is the truth about the way her people see her and the way she sees herself. This whole exercise brings these feelings a little too close to the surface for her liking and she naturally pushes back against this because she’s afraid to face the truth.

It’s really compelling to get such an introspective look at Sabine and the episode is really mature about it in terms of how other characters react to her but also in how it structures itself. There is no token threat that comes out of the ether at the last minute to test everything Sabine has learned which makes this a really intimate character drama where the only stakes are emotional. I wish Star Wars Rebels did this more often because episodes like this prove that it’s much more than a disposable kids cartoon. These characters are rich and interesting so it’s good to see the show approach that.

Sabine is able to face her long buried feelings when Kanan finally respects her enough to let her learn in her own way. She will never take the exercise seriously when fighting with sticks so once she is allowed to use the Darksaber things can finally progress. Holding a symbol of her people’s strengths brings her feelings right to the surface and she is able to process them for the first time.

Kanan’s teaching style improves when he starts saying things that seem harsh but are designed to wind her up to the point that she is able to vent. Hera helps steer Kanan in that direction and Freddie Prinze Jr’s vocal performance is great in this scene. He adopts an angry and condescending tone when berating Sabine about her failings while effortlessly blocking her best attacks to show her how much she still has to learn. 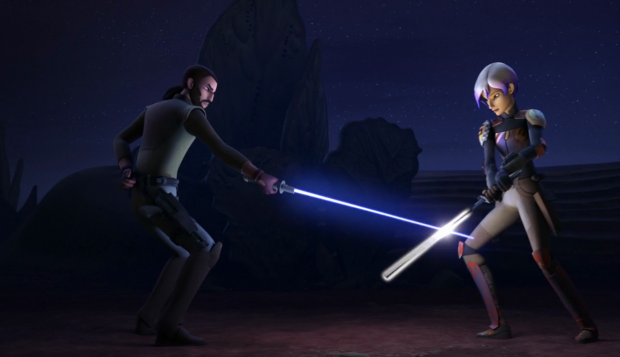 Kanan tries to force Sabine to confront her feelings

Sabine’s feelings come right to the surface and they are definitely complex. Her people see her as a traitor and she sees herself in that way because she helped the Empire create weapons that enslaved and killed her people. Even though she physically didn’t fire them or even make the exact weapons the empire used against her people being part of the Empire made her part of the problem. It got to the point where she couldn’t take it any more but she also felt that she couldn’t return to her people because of the personal shame she feels.

These are really dark and powerful emotions that Sabine has been bottling up and the combination of her unfocused yet relentless attack on Kanan, the excellent vocal performance from Tiya Sircar and the really effective score bring this to the viewer’s attention in a really effective way. Has Sabine suddenly resolved her feelings? Definitely not but at least now she’s in a place where she’s willing to try to make up for past mistakes and use the Darksaber to lead her people into what hopefully amounts to a brighter future. She has the support of the Ghost crew and even Fenn Rau in what she does next so I’m interested to see where the next part of the arc takes her.

On a visual level this episode is a treat as well. The animation when the story of the Darksaber is told using shadows on the wall is great to look at and really adds to the mythological nature of the blade. Sabine’s various training sessions are also great to watch with really impressive techniques on display from both sides.

The only issue I had with the episode was Ezra’s involvement. His reason for being there wasn’t entirely clear other than Kanan making him teach Sabine the basic forms that he has learned. He did offer some interesting insight on familial relationships when he reminded her that she has a family to return to where he doesn’t. That was a quietly powerful moment but the rest of Ezra’s contribution was largely unnecessary. If he had been more involved in the training as an assistant to Kanan or pointed out where he could improve as a teacher then it would have been more useful. That way Kanan could have had the emotional plea from Hera and more practical advice from Ezra which would have made all of the characters feel worthwhile. 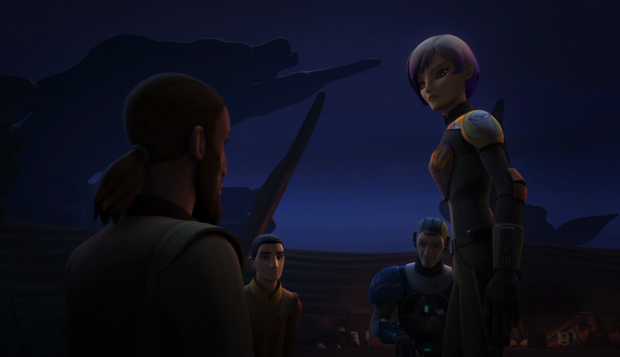 She has all the support she needs

An excellent episode that provides some much needed insight into Sabine’s feelings about her people. Having her confront the way she feels about them through the challenge of learning what it means to lead them works really well and coupling it with Kanan’s failings as a teacher was a really nice touch. Leaving a manufactured threat out was also the right move for an episode like this as it allows it to be all about Sabine and what she needs to deal with. Ezra’s involvement felt unnecessary at times but he is involved in a quietly powerful moment despite the missed opportunity for him to offer commentary on Kanan’s teaching after having experienced it.