Star Wars Rebels returns to Maul’s vendetta against Obi Wan Kenobi as he heads to Tattooine to confront the source of his hatred.

I’ve always thought Maul was an interesting character. He was someone I found interesting in The Phantom Menace and I’m glad he was reintroduced in Clone Wars. Maybe it’s my inner 9 year old loving the idea of an acrobatic Sith lord with a double lightsaber but even at that the character was afforded depth when he returned in Clone Wars. 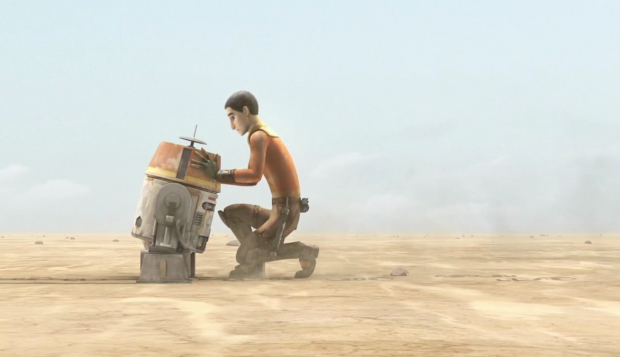 Star Wars Rebels hasn’t always know what to do with the character but the impression I got is that he represented the pull Ezra feels towards the Dark Side of the Force. Maul existed to prey on Ezra’s darker thoughts and lead him down the path to corruption where Kanan’s purpose in his relationship with Ezra is to encourage his desire to do good. In theory it’s a good conflict that is easy to follow and has scope for development but in practice it has been underdeveloped and hasn’t really gone anywhere interesting.

This episode is the end of Maul’s story. For good or for bad it does close off his involvement in the Star Wars universe and allows him to have the final confrontation with the man he focused all of his energy on beating. That doesn’t mean this episode does a good job of that but it definitely counts as an ending.

The problem that Star Wars Rebels sometimes has is that the writers feel the need to put at least one of the main characters in an episode when it isn’t always the best approach. In this case, Ezra has to be our window into the story even though he has almost no involvement in it. He only enters it because Maul is having no luck finding Obi Wan and thinks that Ezra will be better able to draw him out.

Ezra’s involvement is triggered by the Holocrons activating and hearing Maul’s voice. Despite being advised not to pay attention to them he steals a ship and heads for Tattooine where he is essentially haunted by Maul who stays close and creates illusions to send Ezra down the desired path. 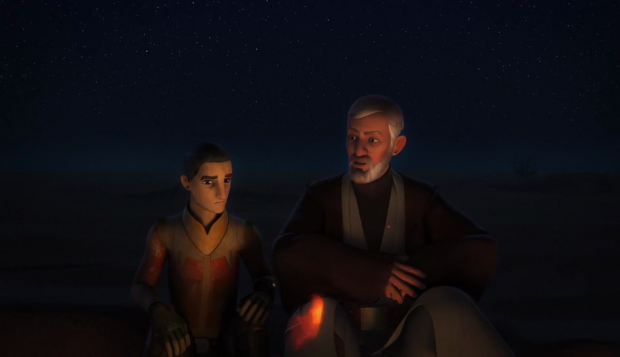 This part of the episode actually works really well. I wonder if the intention was to make reference to the Temptation of Christ as some of the elements were similar. In this scenario Maul would represent the Devil. Even though he didn’t do much to tempt Ezra the attempted influence was still there and it fits Maul forcing himself into Ezra’s life as a Master he never asked for. The episode doesn’t do enough with Ezra wandering the desert but there was definitely potential in there.

Ezra’s role in this episode is a huge problem in general. He steals a ship from the Rebellion and goes off on his own mission without really knowing what to expect. When he returns he gets away with it with minimal scolding from Hera or anyone else. This is a problem with the character over this season in general. He tends to do a lot of reckless things and completely gets away with it which is baffling.

One thing the episode does well is confirm how foolhardy Ezra’s behaviour is. He learns early on that this whole mission is a trap but he soldiers on anyway with a reluctant Chopper in tow. Ezra is so sure that he is right that he forges on expecting something to turn up but nothing does for the longest time and it ends up proving costly when the sandstorm renders Chopper useless. His behaviour has effectively doomed his companion and it’s only a matter of time before her follows. This should be a strong lesson for Ezra in not behaving this way in future but I suspect the lesson won’t sink in.

Obi Wan Kenobi (Stephen Stanton) doesn’t show up until the episode is almost over and my feelings on his appearance are mixed. On one hand I think Stephen Stanton did a great job channelling Alec Guinness and the writing reminded me of the Alec Guinness seen in A New Hope so in terms of timeline placement the episode did a really good job. Obi Wan comes across as a man who has gained wisdom with age and has committed to the life that he built for himself. The advice he gives to Ezra is that he shouldn’t be on Tattooine as he is needed elsewhere. It’s good advice and it almost acts as an admission that this episode should never had happened as Obi Wan Kenobi has no business being in this show since his role comes later in the overall story of the Rebellion against the Empire. 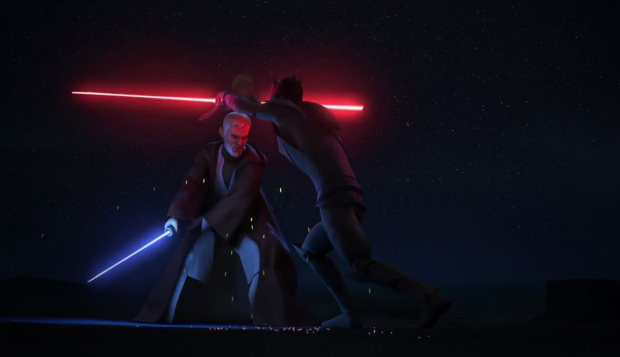 Maul’s final confrontation with Obi Wan was disappointing to say the least. In the context of this show their antagonistic relationship doesn’t exist but feeding in from Clone Wars there should have been more to it than we got. I do understand the idea that Obi Wan hasn’t given Maul a thought since he sent himself into exile where Maul has thought of nothing else so the vendetta is entirely one sided. Maul is pathetic in many ways as he has allowed his life to be entirely consumed by his hatred for Obi Wan where the reverse isn’t true. This episode basically tells us that Maul wasn’t important in the grand scheme of things and was just a nuisance that needed to be dealt with. It’s harsh but not everyone can be narratively significant to the overall story.

The lightsaber fight itself was where I was disappointed. It lasted a matter of seconds and it’s not hugely clear how Obi Wan managed to kill Maul since all Obi Wan seemed to do was split Maul’s lightsaber. Obviously he must have struck a critical blow but it’s not clear at all.

Their final interaction where they talk about the “Chosen One” and Maul finds some semblance of peace in the potential for the “Chosen One” to avenge them all. There’s a quiet dignity in Maul’s death that comes across very well and Obi Wan shows respect to his former enemy by closing his eyes when he dies.

I mentioned above that this show feels the need to have at least one of the core characters be a big part of every episode and this outing proves that this isn’t always necessary. If Ezra had been cut from this entirely then the episode could have been all about Maul and Obi Wan. There was no need for Ezra to meet Obi Wan and bizarrely tell everyone that he’s alive. The final conflict between Maul and Obi Wan could have happened independently of the other characters and serve as the close of an arc from Clone Wars that has nothing to do with them. Alternatively, Rex would have been a good character to focus on here since he has the pre-existing relationship with Obi Wan. 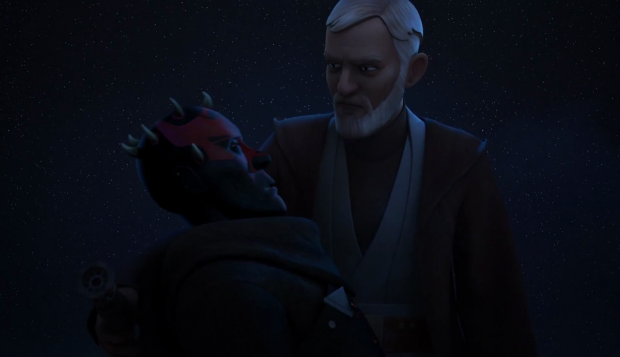 Another issue is that Maul’s relationship with Ezra feels unresolved. Unless he is going to come back as a Force Ghost then there’s a lot of questions around what will happen in the ongoing story of Ezra being tempted by the Dark Side. Maul was the perfect character to represent that struggle and offer that physical temptation but now that this is gone then what does that look like in the future? It just feels like an anticlimax for the character.

An uneven episode with an anticlimactic resolution to Maul’s vendetta with Obi Wan. I understand that the episode was confirming that Maul isn’t important and needed to be dealt with but the end of that antagonistic relationship feels somewhat limp. The lightsaber fight itself lasted a matter of seconds and it was unclear what actually happened. Stephen Stanton did a great job voicing the old Obi Wan as he successfully channelled Alec Guinness with a script that made the character feel right for the time period.

Ezra’s role in the episode was fairly pointless. His foolhardy behaviour really needs to stop being accepted by the other characters and the walking through the desert part of the story could have been expanded to show how much Maul is able to corrupt him. His discussion with Obi Wan only backs up how pointless his role was as he is told that he is needed elsewhere. Now that Maul is gone there is a question mark over how Ezra being tempted by the Dark Side will be developed. 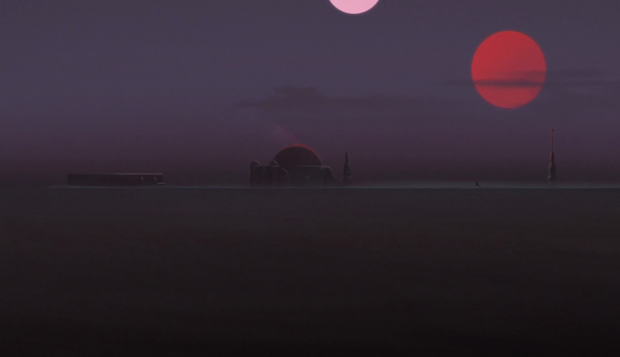