Star Wars Rebels focuses on Zeb and the droids as an Imperial Infiltrator Droid stumbles onto the Rebel base creating the potential for the base to be discovered by the Empire.

This scenario is reminiscent of the beginning of The Empire Strikes Back with even the visual of the droids launching looking quite similar. It’s a nice callback to what has come before and further slots this show into the universe by having this be a standard Imperial tactic. 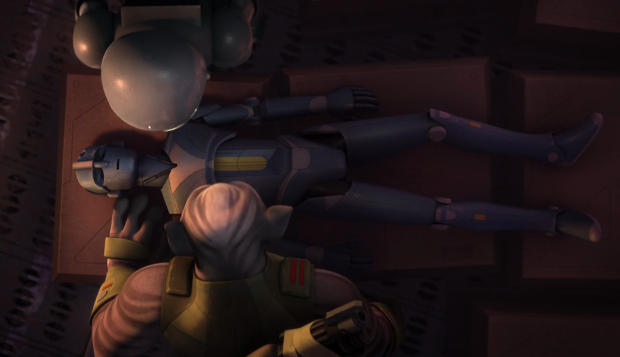 Unfortunately the plot of the episode is a little too familiar as well. We’ve all see stories where people who don’t get along have to grudgingly work together to solve a problem and this isn’t a particularly good example of that. Zeb and AP-5 make for an entertaining enough pairing with the animosity between them but the episode doesn’t really do anything interesting with it.

AP-5 is a good character to give some attention to and he reminds me of Alan Rickman’s version of Marvin from The Hitchhikers Guide to the Galaxy. His personality is very different but the mannerisms are similar so it’s amusing to see this character given plenty to do here. The clash in personalities between AP-5 and Zeb makes for entertaining viewing and having Chopper in the mix really helps as well.

Beyond the entertainment value there’s not a lot about this episode that really stands out. The Infiltrator Droid (David Acord) wasn’t featured heavily enough to be the threat that Zeb’s panicked behaviour suggested that it was. It’s a shame as there was a lot of potential for this to be a really tense episode with the larger threat of the Empire potentially on the horizon. The droid looked threatening enough in its alternate form and the idea of it moving around the base cannibalising other droids for power could have been terrifying in the right context. Instead it was a problem easily dealt with and the threat level never really came across.

Zeb’s behaviour was fairly out of character as well. He acted as if he was really clueless about how to handle the situation which definitely isn’t consistent with what has been established about him. It wouldn’t have taken much for this episode to be about Zeb leading a hunt for this wayward Droid before it brings the Empire to the base. Seeing him bicker with AP-5 is all well and good but it’s not a good use of the character and takes away from the intelligent strategist we have seen before.

The use of Kallus in this episode wasn’t necessary either. It’s good to see that his role as an Imperial Officer gives him opportunities to help the Rebels as Fulcrum but he supplies information about the Droid that Zeb and the droids could have discovered themselves. Having them see the specs for the Infiltrator Droid robs the episode of a lot of tension as it lets them know exactly what they’re dealing with. Plots like this work so much better when the reveals are teased gradually. 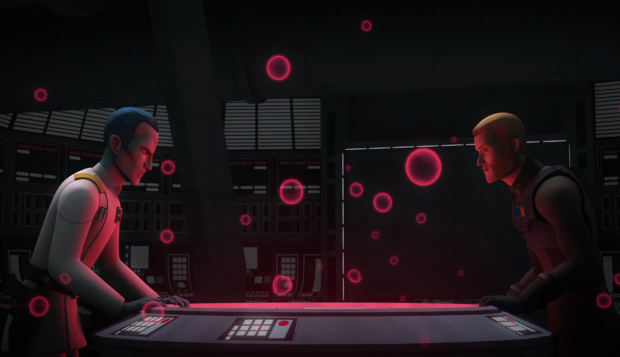 I liked having the reminder that Kallus is in a difficult position as he could be outed at any time and suffer consequences for treason. Having him in the role of Fulcrum really enhances his character but it could have been used much better than this.

Thrawn’s appearance at the end of the episode was a nice surprise. We get more of his “long game” approach when he doesn’t see the destruction of the Star Destroyer as a defeat because it comes with the knowledge that the Rebels must be in one of the 94 systems that the Infiltrator Droids were sent to. This creates a contrast between the optimism of the droid being sent back as a weapon and the inevitability of Thrawn finding the base. It’s only a matter of time now and the episode ends with an appropriate level of dread. I imagine it’ll take longer than the few hours it would really take for the Empire to find them considering their vast resources but knowing that they will be found soon is good enough.

An underwhelming episode that wastes a lot of its potential. Having Fulcrum reveal everything about the Infiltrator Droid to Zeb removes the potential for the reveals to be teased throughout the episode. It would have been easy for this to be a showcase for Zeb as he hunted the droid before it revealed the Rebel base location to the Empire. Zeb and AP-5 bickering is all well and good but there was potential for a better story here. Kallus risky role as Fulcrum is good to see again as it enhances the character but there could have been a better use for it. The ending of the episode was well done as it shows Thrawn as being a “long game” strategist when he sees this as a victory in the sense that the location of the Rebel base is being narrowed down.