Star Wars Rebels reaches the end of the season and raises the stakes when Grand Admiral Thrawn learns the location of the Rebel base on the even of their mission to take back Lothal. Both episodes of the finale were aired on the same night but as I always do with double episodes I’ll review the first part without having seen the second part so that my opinion of the build-up isn’t coloured by knowing how it pays off. 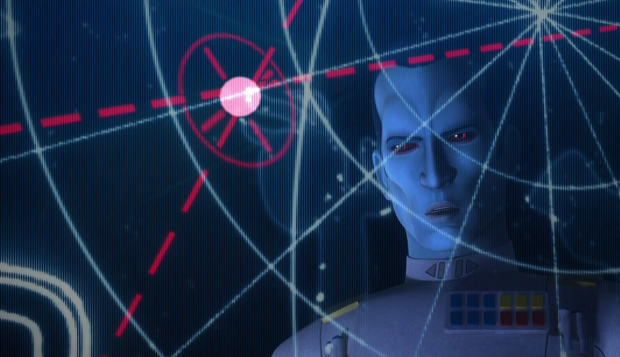 Grand Admiral Thrawn has been a really interesting antagonist for this show. He’s devious, calculating and incredibly intelligent which makes him a capable match for the Rebellion. Unfortunately he hasn’t always been used that well and the large absences really don’t help establish him as a credible threat.

This episode corrects a lot of that by giving Thrawn a significant role that lets his plotting and strategy across the entire season pay off in a really significant way. When we last saw him he had figured out that Kallus was in league with the Rebels and was supplying them information under the alias Fulcrum. His strategy at that point was to bide his time until it suited him to use that information to his advantage. The idea was that Kallus would eventually lead him to the Rebel Base.

What happens here is exactly that. Thrawn holds a meeting designed to bait Kallus into sending a transmission then he confronts Kallus and uses that transmission to find the Rebel base. It’s a simple plan but a really effective one and it shows how calculating Thrawn can be. Not only that but it shows how careless and complacent Kallus has become as he clearly doesn’t anticipate Thrawn’s plan in any way so it was inevitable that he would get caught.

Now that his cover has been blown and Thrawn has him prisoner it’s unclear what will happen to him but I can’t see a scenario where Kallus makes it out of this alive. Unless the liberation of Lothal happens and the Rebels make a point of rescuing him which seems unlikely since they don’t even know that Kallus has been captured. It’s looking fairly grim for Kallus and the fact that I’m concerned about that is a testament to how well this character has been developed since he started questioning the Empire. 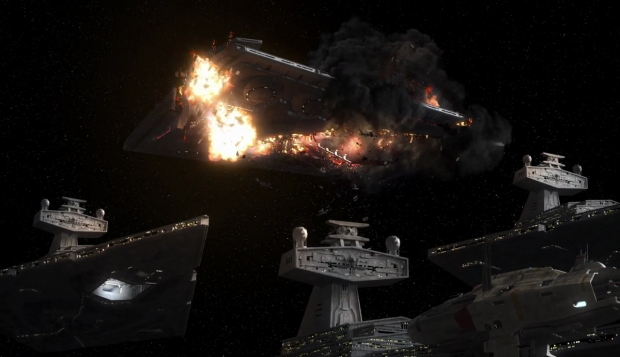 Every victory has a high price

There was a really good character moment between Kanan and Ezra prior to Thrawn showing up. It’s fairly clunky in terms of how the conversation happens but the interaction itself is noteworthy. Ezra shows some rarely seen humility when he marvels at all the work that has been done to prepare for the attack on Lothal and genuinely seems grateful that so much effort is being taken to liberate his home. Despite not being there at the moment it’s clear that Ezra has a connection to Lothal and will be glad to see it liberated.

He also thanks Kanan for all he has been taught. This goes beyond his Jedi training and extends to life lessons in general. Kanan naturally assumes that Ezra is talking about Jedi training and it’s clear that he’s still insecure about his own incomplete training making him an ineffective teacher but he seems genuinely pleased that Ezra values what Kanan has taught him. It’s a really genuine moment even if the framing of it could have been stronger.

When the attack comes Kanan takes it upon himself to warn Bendu about what is coming and seek his help in protecting his people. Bendu reacts with anger because he has committed himself to being in the middle of everything and never taking sides in any conflicts. He is old enough that he feels above any petty conflicts and simply doesn’t want to be involved. He resents Kanan for bringing this conflict to his home but still doesn’t want to do anything to defend it.

Bendu becomes somewhat terrifying after Kanan accuses him of being a coward and he reacts violently before disappearing. I really like the idea of Bendu as having a force sensitive creature who doesn’t fall into either the Light Side or Dark Side camps allows for a fascinating perspective on both and helps to highlight that good and evil are choices but there is nothing inherently good or evil about either side of the Force. It’s what people do with those abilities that makes the difference and Bendu’s choice to live quietly while acknowledging both sides is an example of finding a balance that isn’t motivated by fear of something that isn’t understood. 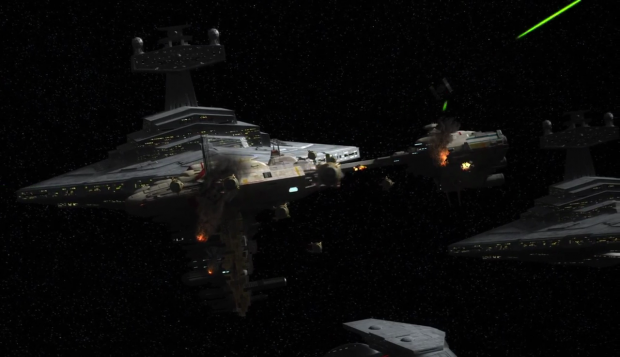 It’s possible that Ezra could become a Jedi who embraces the dark side without letting it corrupt him and Bendu might be the key to helping him find that balance. I also think that Bendu’s role in this story isn’t over yet and he will decide to fight the Empire to preserve his home in the next episode.

The attack itself is well handled. From the very beginning it feels like the Rebels are fighting an uphill battle and the situation just seems grim. Thrawn has them vastly outnumbered and the fact that he is able to jam their ability to escape through Hyperspace only intensifies the desperation. Hera’s entire defence plan is to create an opening so that Ezra can escape and bring back reinforcements but even that proves difficult. It’s brutal to watch the Rebels suffer so many losses and the emotion associated with that loss comes across very powerfully.

Sato’s manoeuvrer involving using the Carrier to collide with one of Thrawn’s ships to create that opening just shows how outclassed the Rebels are and how costly the smallest victory is. I would have thought there would be more protests against Sato’s plan as the Rebels probably can’t afford to lose that Carrier ship but I imagine the loss will be felt very soon.

Sadly Sato’s death didn’t resonate the way that it should have since he has been a consistent background characters. We will likely never see the extent of his history with Thrawn that was highlighted to us back in “Iron Squadron“. This means that his death comes with unresolved baggage that ties into other storytelling issues this show has in general.

A well put together first part of a two part story that raises the stakes in really interesting ways. Thrawn revealing that he knows about Kallus and capturing him raises a big question over what will happen to Kallus and Thrawn finding out the location of the Rebel base makes him more dangerous than ever. Prior to Thrawn’s attack there’s a really genuine moment between Kanan and Ezra where Ezra shows humility by expressing gratitude for the efforts to retake his home as well as thank Kanan for all he has done.

Bendu is also used well by highlighting his desire to stay neutral and having him express anger at Kanan for inviting this conflict to his home He doesn’t take kindly to being called a coward and I imagine he will have a change of heart in the next episode. The attack itself is impressively done with the Rebels feeling outclassed at every turn. It is shown to be immensely difficult to do something as small as let one ship escape and the cost to the Rebels is high when Sato sacrifices the Carrier ship. 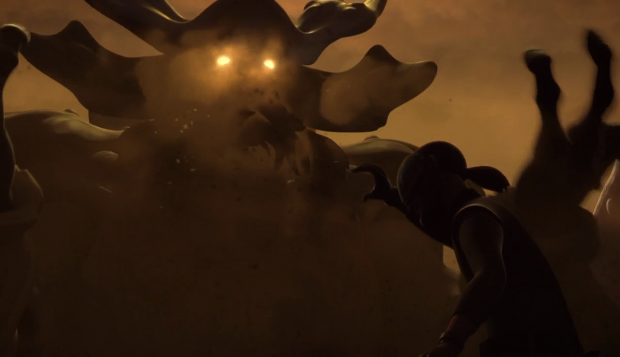 Bendu has had enough