With the first part being largely devoted to setting up the conflict the second part is more about the action. There are only a handful of character moments and one major piece of characterisation to be mined from the second part is Ezra asking Sabine for help. It’s a very quick scene where there is some resistance due to the fact that there is still a civil war happening on Mandalore but ultimately Sabine shows loyalty to her friends and decides to commit her forces to helping out. 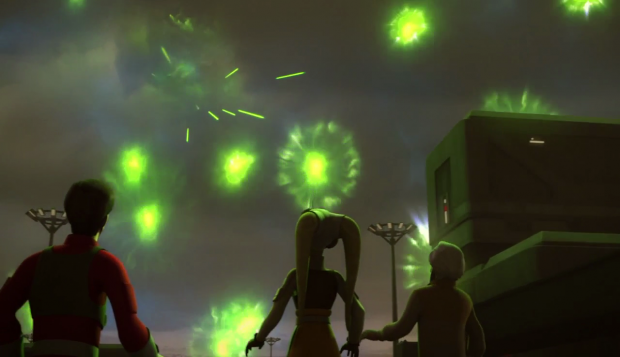 Hera takes in the enormity of the battle

Having an all action finale isn’t a bad thing when it feels earned and this really does feel earned. The previous episode put the pieces in place really well so it really works when the battle rages on and the circumstances shift as the episode progresses.

This episode avoids the trap of making it empty and emotionless by focusing on Hera who has to lead the defence of the base and deal with the prospect that she might lose people close to her. The orbital bombardment sequence is the best showing of that when she can do nothing but sit and watch the laser blasts hit the shield and hope that it holds out. Seeing the terror on Hera’s face really focuses the scope of this attack and reminds us that ultimately the important thing is the survival of the people rather than the emptiness of anonymous people being killed. This wouldn’t have been effective if we weren’t invested as viewers and Hera helps that to happen.

Hera also lets her personal feelings come into the battle when she outwardly shows concern for Kanan’s safety when he is out in the wilderness right in the line of fire. It’s a great contrast between Hera’s big picture thinking and the loyalty she has to those closest to her. Her feelings for Kanan are perfectly evident here and the fact that she calls him “love” is especially telling of the connection between them. We haven’t seen any romantic tension between them in quite some time and I had wondered if the relationship was gone but I’m willing to believe that they both realised that it isn’t important in the grand scheme of things. i would like to see it specifically addressed next season though. 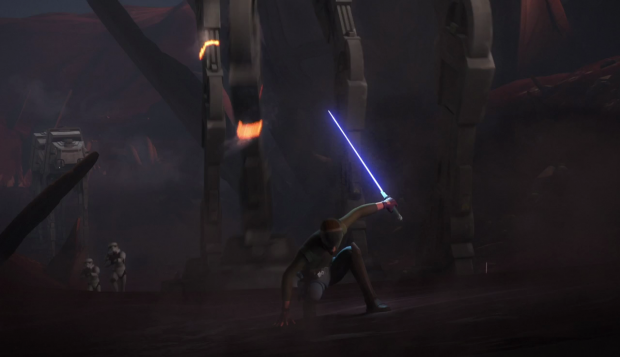 The major theme of this episode is hopelessness. It’s clear that the Rebels simply aren’t equipped to take on the Empire and it looks dubious as to whether they will even be able to escape. The Empire are about as formidable as they can be in this episode with their seemingly infinite resources and superior firepower. When the walkers are added to the conflict things look particularly bleak as there’s very little that can bring them down. Kanan’s handy lightsaber skills are able to fell one of them but losing one walker is no big deal to Thrawn as he has many more. That’s the clear difference between the Rebels and the Empire and it has always been the case. I like seeing the Rebels truly on the defensive as it shows how far they need to come in order to beat the Empire.

I was hoping for a bit more from Thrawn in this episode. He doesn’t really do much other than trade words with various people and join his ground troops for whatever reason. The character is still around but this episode suffered from lacking in anything definitive to end the season and take us into the next. Of course the Rebels lost their base and Thrawn effectively won this battle but that wasn’t really reflected in anything his character did.

As I predicted Bendu decided to get involved after all but he stayed true to his word and took no side in the conflict. He basically wanted to get everyone off his planet and attacked the Rebel forces as well as the Imperial forces. Of course it looked like he was concentrating on the Imperial forces but that’s simply because there are more of them. Bendu’s attack is really impressive as he uses the planet itself as his weapon by creating a storm that devastates everything it comes into contact with. The best word to describe it would be “elemental”. It’s something I haven’t really seen before in this franchise and it adds an extra dimension to the battle. 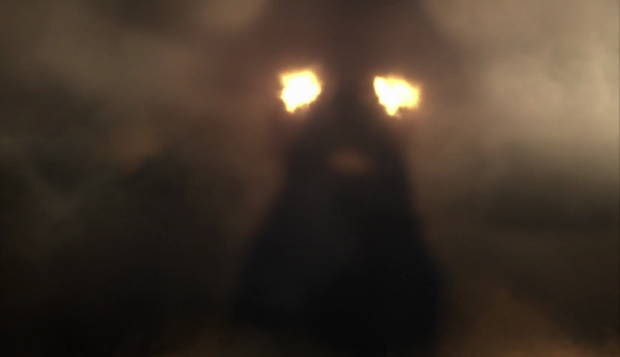 Bendu is one with the planet

Thrawn does get something of a victory against Bendu at least as fas as he sees it as he is able to bring him down and threaten him with death before Bendu disappears. This also comes with a warning of Thrawn’s defeat. I doubt we’ve seen the last of Bendu but it makes sense to get rid of another powerful Force user before the show catches up with the Original Trilogy.

Kallus somehow manages to escape because Thrawn decided to keep him around rather than killing him. This makes absolutely no sense as Thrawn has completely outlived his usefulness to Thrawn at this point so shouldn’t have been kept alive much less brought along. This does allow him to join the Rebels and be free of the Empire while also finding validation when Kanan thanks him for all the risks he took for the Rebel cause. It’s a satisfying emotional moment and has the weight of character history fuelling it. 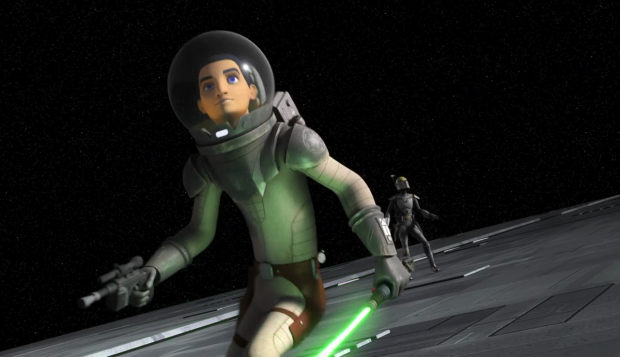 Naturally the Rebels manage to escape and the strike team involving Ezra, Sabine and a group of Mandalorians fighting on the outer hull of the remaining Interdictor ship to stop the Hyperdrive jamming was great. It’s something we don’t see a lot of and felt like a fresh way to frame an action sequence. The episode was cutting capably between the space battle and the ground assault so this felt like something of a combination of the two and was a good use of the characters involved.

The escape itself technically counts as a victory for the Rebels but barely. They have lost a lot of their forces and are on the defensive once again. It seems that liberating Lothal is something that won’t happen now but it looks like they will be operating out of Yavin next season which brings us even closer to the events of Rogue One: A Star Wars Story.

A solid finale that takes full advantage of part 1 having laid the groundwork and provides a largely action based conclusion. This isn’t empty as the emotion of the scenario is grounded by Hera reacting to the scope of the situation. Her concern over Kanan’s safety also helps to highlight that the relationships between the characters are important. The episode carries the theme of hopelessness well as the Rebels are completely outclassed by the Empire’s infinite resources and concentrate on escape. It really shows how far the Rebellion needs to come in order to defeat the Empire.

As predicted Bendu does decide to get involved but doesn’t discriminate with his targets showing that he never takes sides. He is impressively terrifying as he uses the planet as his weapon though Thrawn does get some form of victory against him even if Bendu isn’t actually killed. It’s a shame Thrawn didn’t have more to do in this episode as this was the culmination of his plan. He is still around but is somewhat ineffectual in this particular outing. The escape itself and the cutting between different action sequences were handled well along with the reminder that this was only a victory in the sense of survival. It looks like the Rebels will be operating out of Yavin next season so we’re getting closer to the events of the Original Trilogy. 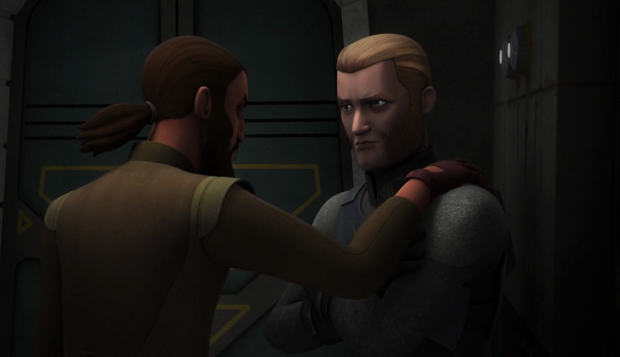