I’ve mentioned before that this show feels very different in its second season and the changes have mostly been positive. Intensifying the alien angle has been great for Supergirl on a thematic level. Even if the execution isn’t quite there the fact that they’re trying is definitely appreciated. 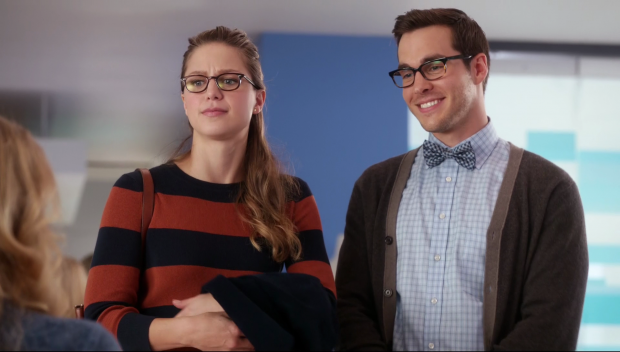 Mon’El is ready for his first day

This episode is a good example of theme over execution. A group of criminals enhancing the xenophobic fear that was already there by using alien weapons is a good idea on paper and works well enough in building up the overall theme that this season has so far been going for but in practice the villains were weak and the point was a little too laboured.

The problem is a lack of perspective. We tend to get a really high level view of these issues without having a perspective to help dig into them. The alien weapons plot was more focused on what Kara needed to do to stop them as well as the threat they represented to her but we never get any real insight into what this means for normal people.

It is attempted through some hammy dialogue at CatCo where someone questions his overall safety and wonders why people shouldn’t just carry guns around in order to feel safe. With a grounded perspective this episode could have tackled the problem of gun control as well and tied it into the immigration themes. Without any focus the potential is wasted and these interesting issues become little more than things mentioned in passing.

It seems like I’m being hard on this episode and I’m really not. I like how the undercurrent of public fear comes across and the fact that we see unnamed extras talking about it gives this whole thing scope. It clearly extends outside the world of our core group of characters and that’s a really strong thing to be doing. This season seems to be going down the route of having Kara -and possibly Mon-El- act as a bridge between humanity and aliens. It’s a good idea and with a little more care taken it could be really compelling. As it is now the whole thing is just fine but not living up to its potential. 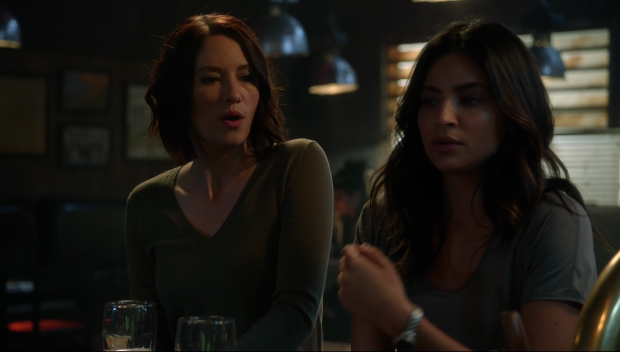 The main strength this episode had is in the character work. Mon’El trying to fit in at CatCo was really amusing throughout and deepened the dynamic between him and Kara. I like when characters are fallible and Kara makes mistakes in almost every episode at this point. Her mistake here is assuming that Mon’El should follow completely in her footsteps and emulate her method of fitting in.

Naturally this doesn’t work for Mon’El as he is clearly resistant to the whole thing pretty much from minute one. Kara really wants him to be a mild mannered intern but that’s clearly not Mon’El’s style and he makes that clear very early on. His antics were amusing to watch from his general disrespect for what Kara wants him to do to his tryst with Eve Tessmacher (Andrea Brooks).

It was a solid dose of comic relief but also allowed Kara to learn an important lesson as a mentor. She has never been one before so was bound to make mistakes and definitely does with Mon’El. She failed to realise that what works for her and Clark doesn’t work for everyone else and she needs to help Mon’El find a way to fit in rather than force her way on him. It’s a fairly obvious lesson but Kara being completely clueless is part of what makes this work. She is convinced that she has found the best way and it’s the template that Mon’El should follow.

This plot could easily have made Mon’El or Kara unlikeable but it never veers into that territory. Chris Wood plays Mon’El as being charmingly naive. He genuinely doesn’t understand humanity and really tries. It just doesn’t add up for him and the problem is that he wasn’t prepared rather than intentionally sabotaging Kara’s efforts. Kara can’t ever be unlikeable it seems and is just as overwhelmed as he is. I’m interested to see what Mon’El’s own way of fitting in will turn out to be. 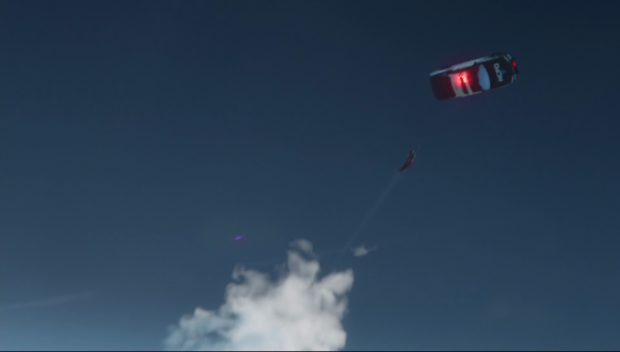 Alex and Maggie’s flirtatious relationship continues to build here after Maggie announces that her girlfriend seen last week has dumped her. This causes Alex to go into full supportive friend mode in offering to help take Maggie’s mind off it. Maggie is less than enthusiastic and detects more than friendship from Alex’s persistent attempts to make her socialise.

Maggie suggesting that Alex might be attracted to her is met with confusion as it had never occurred to Alex that she might be interested in women. It’s pretty obvious to us viewers that Alex is smitten with Maggie but she’s completely oblivious. Chyler Leigh does a really good job showing the change that Maggie brings out in Alex. Last season she was so stoic and passionless which directly contrasts with the influx of personality that she has received this season. Alex seems to be in an almost dreamlike state when she talks about Maggie which makes it obvious to everyone but her. That is, everyone except Winn who really doesn’t seem to be paying enough attention.

Alex is blind sided by Maggie challenging her in this way which forces her to see her sexuality in a new light. We learn that she had never been interested in being intimate with someone else and the suggestion is that she was never really into men to begin with. It seems like a fog is being lifted and she is at least starting to consider it. The first step is taken when she admits to Maggie that there might be some truth in what she said but that isn’t the end of the journey. I like that the show hasn’t jumped into making them a couple just yet as it feels more real for Alex to be semi-closeted for a while. It’s a massive change for her life and shouldn’t be dealt with lightly. As plotting goes it’s almost subtle though nothing this show does could ever be considered subtle. I don’t mean that as a criticism as it is just the format that Supergirl takes with its plotting.

On the other end of the character development spectrum we have James. His story in this episode is handled with a complete lack of sophistication and has him develop along lines that make no sense. Apparently he’s fed up of being the acting CEO of a multimedia empire and wants to try his hand at being a vigilante. He has a desire to do good that has been well established but is this really the way for him to do it? He could be used to enhance the CatCo scenes by somehow turning it into a force for good. The power of the press could be really cheesy but, if done right it could tie into the xenophobia plot by having CatCo dedicated to making sure the truth about alien immigrants comes out. James could be central to that plot and be valuable in that way. 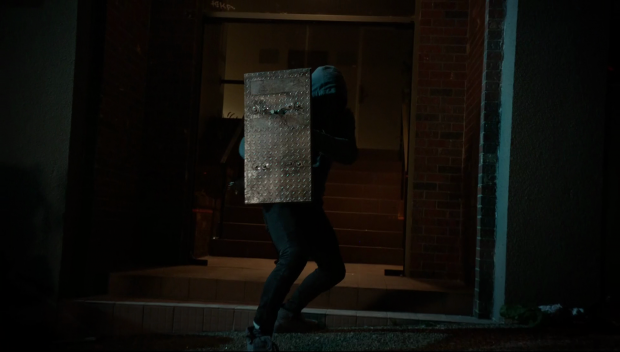 Having him become a vigilante just makes no sense and the episode does this plot no favours. James’ motivation is really badly developed, It just looks like he’s jealous of all of his heroic friends and feels left out. The conversation he had with Winn about important work and making a difference was fine for establishing that Winn is happy where he is and feels like he belongs but it doesn’t help explain why James wants to risk his life. Maybe if more time had been spent on this it would be easy to swallow but within the space of an episode we have Winn go from being against the idea to agreeing to design and build a suit. It’s poorly done and really doesn’t work.

Lena’s role in the episode was compelling as always though I’m not sure if it’s just me waiting for her to turn out to be a villain or not. Everything she says and does seems to be for the betterment of others but maybe I can’t see past the Luthor name. She does seem to have some hidden agenda since she threw a party as a trap for the criminals so that Supergirl could stop them. The twist that the mysterious Cadmus representative is her mother adds some weight to her potential as a villain even if she still comes across as overly cartoonish. It could be interesting to have Lena constantly having to escape the Luthor shadow and I hope that’s where the writers are going with this.

The action was really well done even though it basically amounted to Kara dodging various coloured beams. Seeing her use her speed in combat is always good as it shows that she is learning strategy. Seeing her chase after a rapidly ascending cop car was really cool and I got a kick out of “Operation Doubtfire” which means that she had to constantly switch identities within a single event. The Supergirl parts of the show are better than ever. 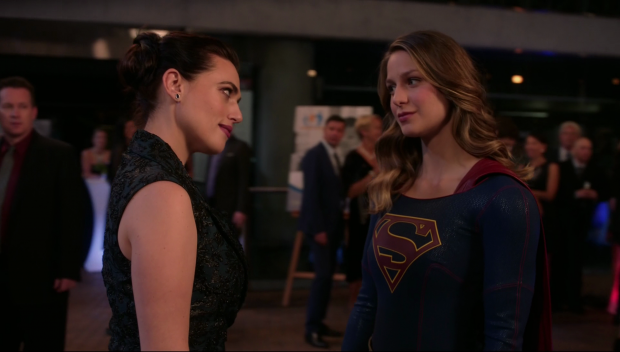 A solid episode where the concepts set up are better than the execution of them. Criminals using alien weapons is fine as something to tie into the theme of xenophobia that has been building but without a grounded perspective the exploration isn’t what it could be. Mon’El trying to fit into CatCo is really amusing and shows that Kara has a lot to learn about being a mentor. The scenes are played for laughs and work really well with Chris Wood delivering a charmingly clueless performance. I look forward to seeing Mon’El’s own way of fitting in.

Alex and Maggie’s growing relationship is handled really well. It’s obvious to the audience that Alex is attracted to Maggie and I like that she is called out on it so that she is forced to really think about it. She takes the first step by admitting their might be some truth to it and that’s enough for now. Unfortunately James’ development isn’t handled quite as well. Having him want to be a vigilante out of -what seems to be- jealousy that all his friends are doing it makes no sense and downplays his current role. If it had been developed gradually then fine but the plotting is too clumsy. The hints that Lena has a hidden agenda keep on coming but I’m not sure if that’s just me or not. I liked the reveal that the Cadmus representative is her mother as it opens up the possibility of Lena trying to escape the Luthor shadow.