Supergirl puts the Reign plot on hold for now and dusts off one of the more problematic villains while reawakening Lena’s conflict between her desire to do good and her status as a Luthor.

Reign is a good and compelling villain; Morgan Edge is not. It has felt like a while since Edge appeared on the show -even if it hasn’t been that long in reality- and this episode serves as an unfortunate reminder of the issues his presence causes. Reign is interesting, nuanced and steeped in the mythology of the show where Edge is a moustache twirling villain who makes no impact beyond his smarmy presence being difficult to ignore. 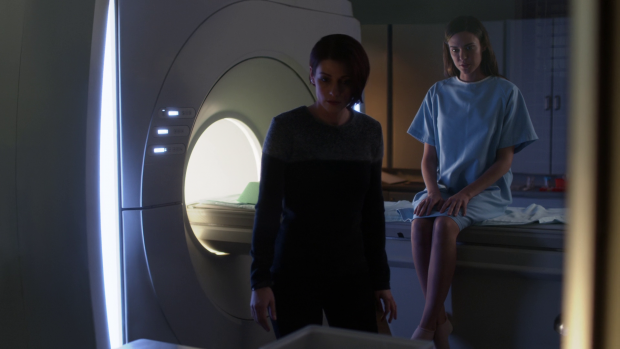 This episode repeats the same story beats we’ve seen before in the ongoing rivalry between Lena and Edge. He accuses her of trying to kill him when his car is tampered with Lena struggles to clear her name because she’s a Luthor and people might be predisposed to believe the worst about her. It’s not exactly the same plot as when Edge tried to frame her for poisoning children with lead but the spirit of it is very similar which means that this conflict clearly has very little left to give as far as plotting or characterisation goes.

Morgan Edge certainly doesn’t develop as a result of the events of this episode. An attempt on his life is something he simply shrugs off as if it were an everyday occurrence so there’s no foundation for why he sees Lena as such a threat to him. He clearly isn’t afraid of her and has some kind of fascination with discrediting her but the what and why aren’t properly explained. As far as I can tell he’s out to get Lena because he doesn’t like her. For all I know it could be the billionaire supervillain equivalent of a child tormenting someone he’s attracted to because he doesn’t know how else to express himself.

His retaliation to the unconfirmed assassination attempt is to poison Lena’s coffee which almost kills her and gives the episode a fairly compelling action sequence involving a race against time to save Lena’s life. Sequences like this show that there’s more to being a superhero than punching villains and highlights the compassion that defines Supergirl as a hero. Using her super breath to induce hypothermia to slow the progress of the poison in Lena’s system is a clever and creative use of Kara’s powers. 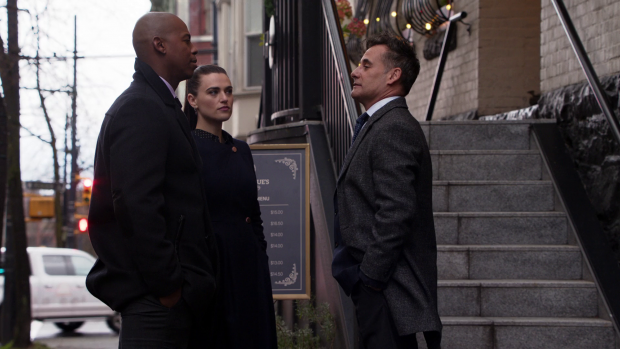 The reveal that Lillian Luthor was behind the attempt on Edge’s life is something of a surprise but only because she isn’t a character I spend much time thinking about when she isn’t on screen. Her appearance allows for a retread of everything we’ve seen before around their relationship. Lillian encourages Lena to embrace her Luthor heritage and stop trying to be a good person while Lena appears to think seriously about it before the reveal that it’s all a trick to allow Lena to gain the upper hand. There’s nothing new here and the suggestion of temptation on Lena’s part no longer works because of how often it has been done.

Despite the repetitive plotting this is a solid episode for Lena in some aspects. She comes clean to Kara about trying to kill Morgan Edge earlier in the season which definitely surprised me as I assumed that it had essentially been forgotten about and glossed over. Using it as a point of concern on Lena’s part is a good idea as it shows that she worries about her potential and is fighting against her darker instincts every day. Kara’s reaction is about what you might expect from her; she’s shocked but supportive and doesn’t really know what to say as she never thought she would have to deal with one of her best friends confessing to attempted murder. She takes comfort in the fact that Lena didn’t actually kill him which gives her hope no matter how much she insists that the only reason Edge isn’t dead is because he outsmarted her. Kara acting as Lena’s secondary conscience is a good fit for the character as it represents the wider hope that she represents as Supergirl

This confession is important because it shows that Lena is aware of her potential to cross the line but also recognises that Kara is someone who can help her with that. It ties into the “stronger together” theme that pretty much every episode of the show promotes and offers a snapshot of the friendship that has developed between these two characters. The fact that it comes after Sam decides to open up to her friends about her concerns shows that Lena has a blind spot to the obvious sometimes despite her intelligence and needed an example of how powerful a resource friendship is to bring her around to the idea. 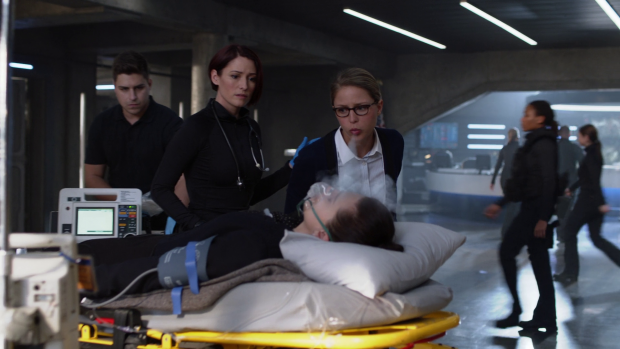 Kara finds another use for her powers

Lena has a personal realisation that partially stops this episode from complete filler status. Her conflict with Lillian and the way she uses her intelligence to outwit her helps with the realisation realise that she shouldn’t ignore the side of herself that she is afraid of. There’s no need to suppress her potential out of fear because it can be used for positive purposes. The execution of this isn’t as good as the idea itself but it does come across in a typical Supergirl lack of subtlety. That isn’t really a criticism as the intended character development does still happen and it’s clear that there has been a change in Lena. Katie McGrath’s performance does a lot of the heavy lifting in showing Lena’s renewed sense of confidence in herself and lack of fear concerning the parts of herself she identifies as being Luthor.

As before it’s clear that Lillian cares about Lena in her own twisted way. This entire scenario is geared towards helping her realise her full potential and redirect her efforts to something Lillian considers worthy of her talents. As far as Lillian is concerned Lena’s tenure at CatCo is beneath her and there are much better things that she could be doing with her time. If nothing else Lena does realise that but adapts it accordingly.

Lillian also doubles as a physical threat thanks to wearing Lex Luthor’s power armour. It’s visually impressive and makes for a really cool action sequence that makes good use of both Kara and Mon’El with Winn lending his skills by hacking a drone. I continue to be impressed with this show’s ability to adapt comic book ideas in a reasonably accurate way. 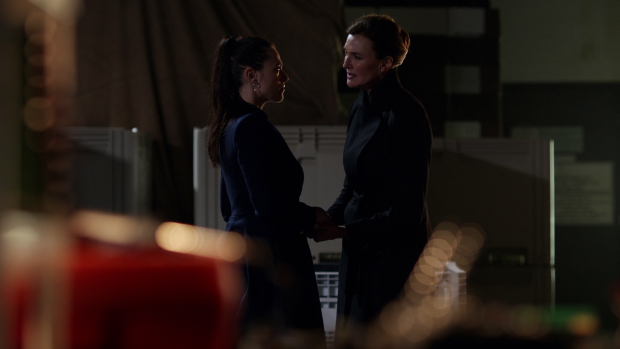 This episode may not feature Reign but adds further depth to that arc by exploring Sam’s concerns over losing chunks of her memory. She enlists Alex to help her investigate the symptoms and comes up with a clean bill of health. I found it interesting that Sam’s powers causes some kind of biological change that doesn’t leave any obvious markers when investigated. There is no medical reason for Sam’s memory loss which puts her mind at ease to some degree because it rules out certain causes for her.

Sam’s concerns force her to face her biggest fears and identify a personal weakness. She mentions that she has been used to fending for herself since she was 16 and has become used to having nobody else to rely on. Her friendship with Kara and Lena is a brand new experience for her and takes some adjustment so she doesn’t immediately think to open up. After some encouragement from Alex she does the difficult thing and asks for the support she needs. Of course she is embraced with open arms and realises that she doesn’t have to deal with it alone. She has close friends who are eager to help her and she no longer has to be concerned with Ruby potentially becoming an orphan. It’s a powerful display of friendship and strengthens the already engaging dynamic between Kara, Lena and Sam.

Two things are clear from Sam’s role in this episode. The first is that there will be a direct internal conflict between Sam and Reign over which personality will become dominant and the second is that Alex’s connection to Ruby will continue to grow as the season progresses. It works as a gesture of friendship to support Sam and furthers Alex’s desire to be a mother.

I’ve mentioned Kara’s subdued role in the episode which is fine now and again as it allows the other characters to flourish. This isn’t a great example of this as such but one thing that does come across is Kara’s role in the lives of her friends. Her conversation with J’Onn draws attention to this in a really thoughtful way. I was drawn to J’Onn comparing Earth to Mars prior to the Civil War that wiped out his people. This suggests that Earth is at a crisis point and needs symbols of hope more than ever. Kara represents that as Supergirl but also does the same thing for her friends in her civilian identity in a different way. At her best she’s supportive, strong and compassionate which is of great value to those around her. J’Onn’s statement about the eye of a storm being just as strong is a wonderful poetic statement about how powerful stability can be in the midst of chaos. The fact that he brings otherworldly wisdom with that statement only makes its impact stronger. 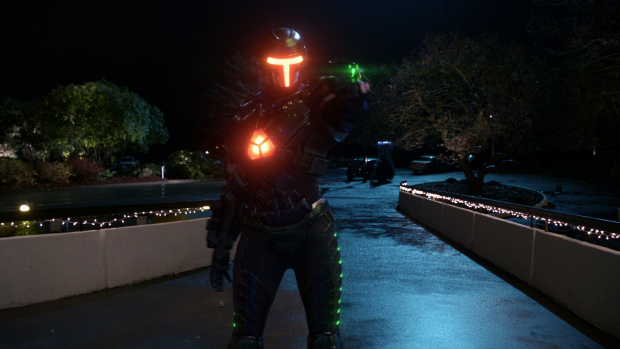 An episode that largely qualifies as filler that is almost saved by strong character moments. Lena’s conflict with Morgan Edge isn’t interesting because the Morgan Edge character fails to be engaging on any level but the ordeal helps Lena realise that she shouldn’t shy away from the traits she defines as Luthor. Her mother is the best person to bring that out in her and the realisation feels well earned thanks to Katie McGrath’s performance. The idea of Lena embracing her potential is better in concept than execution but the intended message does come across. Kara’s role in Lena’s story makes sense for her as she acts almost like a second conscience for Lena to dispense much needed advice when she is at her most uncertain.

Sam looking into her memory lapses tells us that Reign’s powers manifest without being detected but also further her character by letting her realise that she no longer has to deal with her problems alone and that she can rely on others to support her when needed. It helps strengthen an already engaging dynamic between Kara, Lena and Sam.