Supergirl returns for a third season and begins with a boatload of angst when Kara isolates herself from her civilian life.

Kara made a very difficult choice at the end of the last season when she willingly let Mon’El leave in order to save his life. It was clear that she cared deeply for him and the emotional goodbye that they shared worked really well. This episode is all about the fallout of that decision as Kara is a broken woman following the loss of Mon’El. 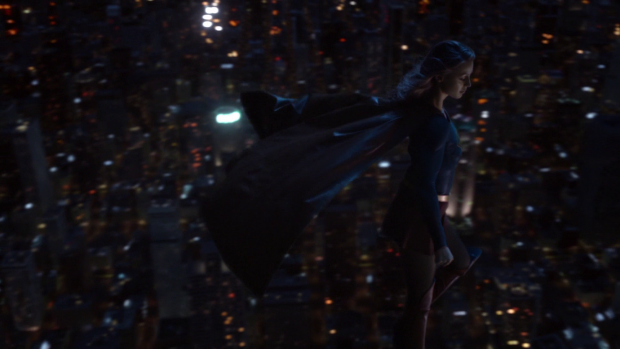 The real strength of this episode is Melissa Benoist’s performance. Everything about it is different to the chipper and optimistic Kara Danvers audiences are used to. She approaches her heroics with ruthless efficiency and has detached herself from the thrill she used to take from saving others. Essentially she flies in, solves the problem and leaves without stopping to interact with those she saved.

This detachment also applies to her personal life where she pays lip service to the life of Kara Danvers but doesn’t get actively involved in it. She shirks her responsibilities at CatCo, doesn’t involve herself in Alex’s wedding plans and constantly ditches Lena when she tries to make plans.

As I said, Melissa Benoist’s performance is excellent. She believably portrays a woman in pain and it’s a jarring shift from the Kara Danvers we’re typically used to. There are moments in the episode where it’s clear that she’s struggling to hold things together and is taking steps to remove herself from social interaction as quickly as possible. 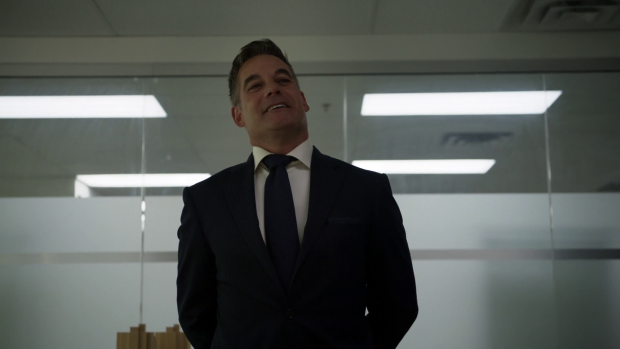 Despite this commendable performance it’s all far too angsty for my liking. I don’t expect the character to remain chipper and optimistic at all times because that’s a very one dimensional portrayal but there has to be something in-between that and what we get here. Perhaps it’s a symptom of Supergirl being a CW show as moments of loss often result in the character concerned completely isolating themselves from everyone close to them. It’s very much a cliché at this point and just not all that interesting to watch. A character moping without finding a way to move forward is very limiting as drama goes and it tends to consume the entire show for far too long.

Kara processing her grief essentially takes the form of her having conversations with her friends and family. Each of these takes on a different tone. Alex tries to appeal to her as a sister and remind her that she doesn’t have to deal with the situation alone. Alex even reminds Kara of all the times she has given emotional support to make it clear that the same is extended to her. Naturally this doesn’t work but it forces Kara to define her grief in some way. Kara is in a unique position with living a double life as she is able to literally close herself off from the world around her and throw the entirety of her focus into being Supergirl. She tells Alex that she doesn’t want to be Kara Danvers because she is nothing more than a woman upset that her boyfriend is gone where Supergirl does actual good in the world. This is all Kara’s point of view and it’s a very melodramatic reaction motivated entirely by her emotional state. I personally think this is far too angsty and the melodrama of the situation is unrealistic. The idea of Kara being able to ignore one part of her life and strengthen the accomplishments of another is a solid enough idea but the execution suffers.

Kara’s conversation with James is something that works very well from James’ point of view. He takes on the role of the boss who needs results and tells her that she needs to do her job regardless of whatever emotional turmoil she is experiencing. His tone is unforgiving and what he says hits a nerve as she retaliates by saying that her work at CatCo is unimportant. This causes her to quit meaning that James’ attempt backfires. This scene was a really good use of James and really should have been how he was used last season rather than the mismatched Guardian plot line. It is mentioned that Guardian is still important to him though CatCo seems to be his focus which could make for some interesting stories involving the character over the course of the season. 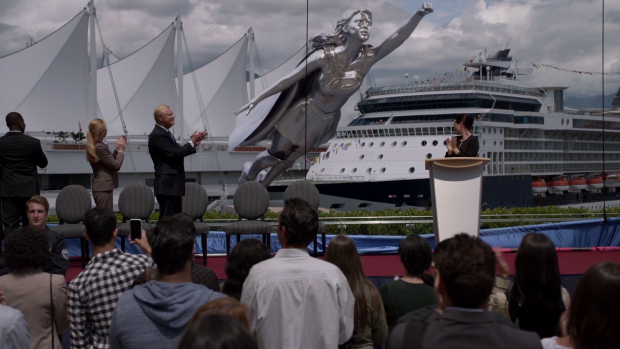 Supergirl is honoured by the city

Lena appeals to Kara as a friend. She apologises for what happened with Mon”El and her involvement with it and tells Kara that she misses spending time with her. Kara keeps Lena at a distance by claiming that she’s busy which means that Lena fails to get through to her until she buys CatCo and Kara accepts the fact that Lena will need her help navigating the world of journalism.

I wouldn’t call what Kara goes through in this episode an arc. It is made clear how poorly she is dealing with Mon’El’s loss and the knock on effect that has on her career as Supergirl but there’s no definitive turning point that makes her decide that she needs other people in her life. She randomly decides to reach out to Lena and go for drinks with her friends but nothing really triggers that change in behaviour. I’m torn between wanting the show to ditch this angsty plot line and actually follow through with it in a way that works. Based on what was established in this episode it’s far too soon for her to come to terms with the loss of Mon’El.

Alex and Maggie are deep into their wedding plans. Maggie is committed to having a huge wedding but Alex constantly shows reluctance. After some prodding it turns out that the reason for this is that her father won’t be there to see her get married or walk her down the aisle. It’s a very weak way of manufacturing conflict but at least it’s quickly resolved by an emotionally resonant scene where she asks J’Onn to stand in for her father. David Harewood’s overwhelmed reaction involving tears is played wonderfully and Chyler Leigh does a great job showing Alex acting emotionally. The bond between these characters is clear and it’s a very powerful moment. 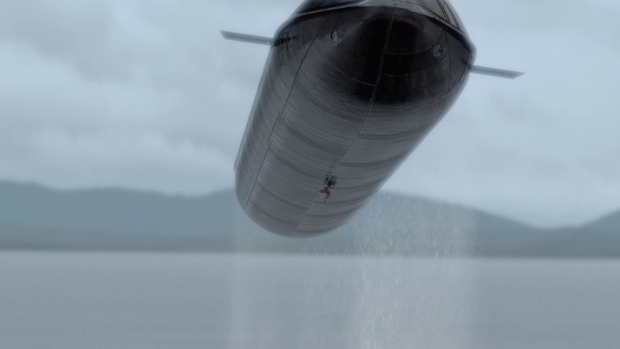 The episode drops the ball on villains. Robert DuBois aka Bloodsport (David St. Louis) is hideously undefined and fails to register as a significant threat. His cloaked submarine with nuclear weapons makes for an impressive set piece but the character is interchangeable with any other threat the show might have.

Similarly, Adrian Pasdar as Morgan Edge is so obviously evil that it’s impossible to take him seriously. Maxwell Lord in season 1 had his problems but he was nuanced compared to Edge. Trying to level a populated area of the city just so he can build high rise buildings is a really dumb plan even by comic book standards and the character fails to stand out as having anything to offer. Adrian Pasdar does a good job playing Morgan Edge and the scenes he shares with Katie McGrath are entertaining enough but I’m far from impressed.

The introduction of Odette Annable’s Samantha Arias is interestingly mysterious. For those that want to know who her character will end up being follow this link but if you don’t then I’ll remain vague. The suggestion in this episode is that she’ll become a villain of some sort over the course of the season and the subdued introduction was a really nice touch. Having her appear as a bystander with a young child was a good idea and her super strength manifesting when her daughter was in danger was a really nice touch. It suggests that protecting her daughter will be her primary motivation and may fuel her descent into villainy in some way. Whatever way it goes it’s a nicely subtle way of introducing a character with a lot more to give as the season progresses.

One thing this episode really impressed on was the visuals. I’ve already mentioned the action sequence where Kara took on the cloaked submarine. It ended with the powerful image of her lifting the submarine into the air and remained tense throughout. The image of Kara as Supergirl hovering in the sky listening for the next problem to be solved looked great as well and was a welcome nod to Superman Returns. I also loved Kara landing and changing into her civilian clothes as she walked behind curtains. 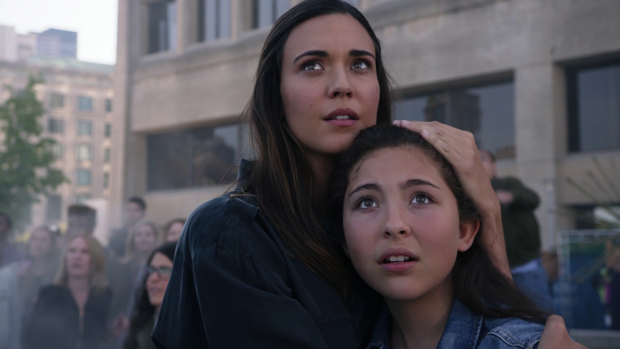 Keep an eye on her

A largely underwhelming opening to the season that concentrates too heavily on angst. Kara’s behaviour throughout the episode feels like a bad cliche though is somewhat saved by Melissa Benoist’s performance. Her scenes with James, Alex and Lena have merit to them but I found her attitude somewhat tedious throughout. There’s also no sense of an arc as nothing motivates her to accept that she needs the emotional support of her friends.

The episode also fails on the villain front. NAME aka Bloodsport failed to register as a threat and Morgan Edge is hilariously cartoonish despite a good performance from Adrian Pasdar. I can’t fault the episode for great visuals and entertaining set pieces though and I really hope that the angst is ditched sooner rather than later.