Supergirl stages a family reunion when Jeremiah Danvers is rescued from Cadmus under suspicious circumstances.

The question over what the show is going to do with Jeremiah Danvers has been open since his last appearance and the circumstances were equally suspicious. There is a lingering question over how he managed to survive for so many years living under the radar inside one of their facilities. The most striking thing is that it wasn’t really questioned by Kara at the time and he hasn’t really been mentioned since. 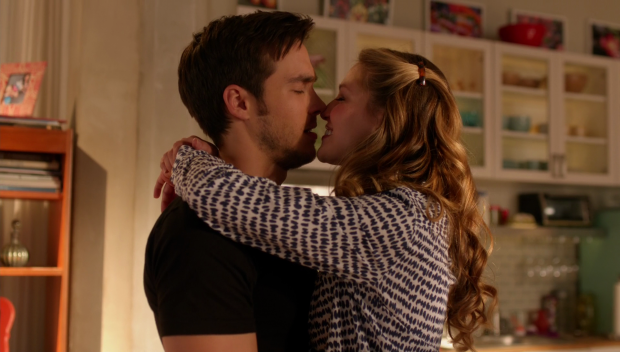 Kara’s all loved up

His return in this episode is suspicious from pretty much every angle. The circumstances of his rescue feel completely staged to the point that anyone should have seen this for the setup that it was. Everything about it felt convenient and the fact that it was such a large escort for one person should have raised a few alarm bells.

Much of the episode hangs on the fact that many of the characters are blinded by the return of Jeremiah and are incapable of seeing the obvious. For Kara and Alex this makes sense because the excitement and relief over seeing him again could overpower their better judgement and prevent them from seeing that there might be something untoward going on.

For Kara it represents the first test of her newly minted relationship with Mon’El. They have a very brief honeymoon phase before problems start to creep in and a big part of that is due to their difference in opinion on Jeremiah’s return. Kara sees it as a gift and is ignorant to the possibility that there could be a darker purpose to his return. Mon’El calls her out on her naive optimism and is frustrated at the fact nobody suspects anything except him. It causes friction between him and Kara because he won’t drop it and she takes exception to that.

It ties into a larger issue in their relationship shown at the start of the episode when she asks Mon’El to keep the relationship to himself for now and he immediately announces it. It’s shown as a funny moment but it’s also a big problem that needs to be solved between them. Kara points out that Mon’El doesn’t seem to appreciate that her opinion means something and should be considered. He fails to respect her desire for privacy and continuing to behave dismissively towards Jeremiah causes Kara to raise her issue with that behaviour. Interestingly him announcing their relationship to the DEO is a cultural thing as on Daxam people getting together is a cause for celebration so there’s something innocent about him not realising that Kara’s request for privacy was completely genuine. Of course this is a character flaw that Mon’El needs to solve if his relationship with Kara is going to work. I also found it interesting that Jeremiah attempted to silence Mon’El by telling him that he knows who he really is. My money is still on him being the Prince of Daxam but I’m unclear why he would want that kept secret. Hopefully it comes out soon because the slow burn is becoming tiresome. 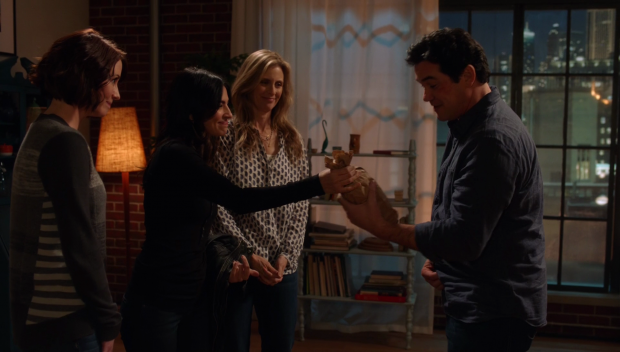 Kara’s relationship with Jeremiah is really well handled. There’s an implied history there that comes across clearly and their interactions have a parent/child feel to them. The betrayal also comes across as visceral because of Kara’s trusting nature. She does start to suspect him before that happens but not enough to take action so it feels raw when it happens. Melissa Benoist delivers a really powerful performance at the end of the episode depicting Kara as completely broken by this experience.

Chyler Leigh does some really heavy lifting as Alex. She is just as giddy as Kara is when Jeremiah returns. The return of her father is enough to make her ignore her instincts and her training because she wants to have him back in her life so much. She holds onto trusting him longer than anyone else does and it creates a rift between her and Kara when she starts to suspect that something else might be at play. Chyler Leigh’s performance is really venomous when she confronts Kara about it which makes it clear how betrayed Alex personally feels that Kara doesn’t trust him.

This makes Alex’s reaction when the truth comes out all the more powerful. The confrontation between her and Jeremiah is tense and loaded with emotion. There’s an indication that Jeremiah isn’t too far gone and Alex refusing to shoot him shows how conflicted she is by the situation. The scene where she breaks down completely to Maggie is really touching and shows just how layered this character has become this season.

J’Onn is the biggest puzzle in terms of his reaction to this. He is as blinded as Kara and Alex are but doesn’t really have any reason to be. It was established last season that Jeremiah was the first human to show J’Onn kindness so they have a connection founded on that but he certainly doesn’t know Jeremiah well enough to take his return at face value. He should have been more suspicious and it does a disservice to his character for him to feel so betrayed when there is more than meets the eye about this. 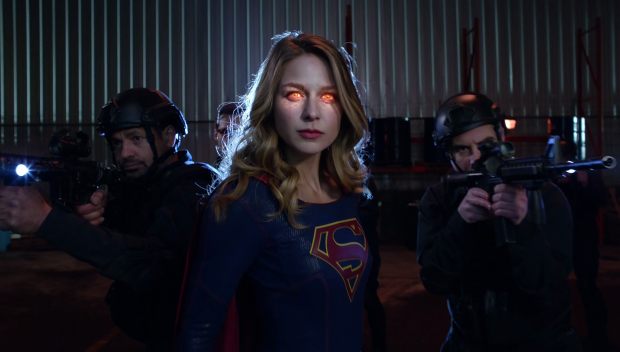 That’s not to say that their interactions weren’t good. There is definitely a bond of friendship between these two men that is founded on mutual respect. Jeremiah talks about how proud he is of everything J’Onn has accomplished and it’s clear that he means it where J’Onn is genuinely pleased to have him back. All of this could still have happened with J’Onn taking the necessary precautions to make sure the DEO was protected until he was sure that Jeremiah could have been trusted.

There were a few head scratching details around this. The most significant one was that his metal arm wasn’t detected. Alex identified that he has nerve damage but somehow misses that his arm was synthetic. We see later in the episode that it isn’t even covered in fake skin so it’s really bizarre that this would be missed. The overall approach to trusting him unconditionally was really problematic.

Jeremiah fits into the show really well. There’s an interesting scene between him and Eliza where she tells him that she can’t simply pick up their marriage where it left off. He has been gone a long time and there’s an adjustment period that needs to be observed. Her feelings haven’t gone away but she can’t simply accept him back into her life. It doesn’t really go anywhere but it’s a nice touch.

I’ve already talked about his interactions with many of the other characters but it bears repeating that he has an implied history with Alex and Kara which gives the betrayal the necessary emotional weight. Jeremiah feels deep enough as a character because of this with the suggestion that he is only helping Cadmus to protect his daughters. He is a willing participant but also seems to be torn in his loyalties such as when he tells J’Onn that he didn’t want to hurt him more than he had to. I imagine Jeremiah will undergo some kind of redemption in the coming episodes. For now he’s a sufficiently layered villain to represent a threat on more than one level. 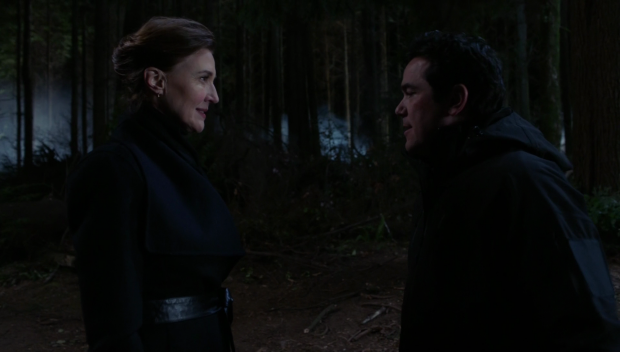 The episode boasts some really well put together action sequences. As staged as it was Jeremiah’s rescue was really impressive and it allows us to see the Martian Manhunter in action which is a rare thing. Kara rebuilding the destroyed railway line so that a train isn’t destroyed is a really impressive sequence as well because it was exciting and made good use of the ticking clock aspect. It also represents Lillian Luthor knowing that Kara’s compassion is a weakness that she can exploit. She may not be a deep villain but the threats she concocts are intelligent. It remains to be seen what the alien ship being built in secret will turn out to be. This could finally be the season focusing on an endgame that it will build to.

A solid episode that delivers some really interesting character drama through Jeremiah Danvers’ return. His return is suspicious and the episode doesn’t try to disguise that but the way the various characters react to it makes for interesting viewing. Kara and Alex are blinded by being happy to have their father back so don’t see the obvious where Mon’El is more cautious and speaking up about that causes friction in his newly minted relationship with Kara. This also ties into a larger issue of him not recognising that her voice is important. It’s well handled and conflict that can be explored. Alex has a really powerful emotional arc as she has to deal with Kara doubting Jeremiah as well as the realisation that she was right to be cautious. Here break-down to Maggie at the end of the episode is especially effective.

J’Onn is the biggest puzzle as it’s easy to understand that he’s glad to see Jeremiah but at the same time he should behave more cautiously than he does. He is too quick to trust and fails to pick up on some really obvious signs. It does a disservice to his character to behave this way and is inconsistent with everything we know about him. Jeremiah is shaping up to be a compelling villain with the suggestion that he feels working with Cadmus is the only way to protect his daughters. He makes reference to not hurting J’Onn any more than he has to and generally seems regretful once the betrayal is known. There’s a lot to build on here and it’ll be interesting to see it develop. 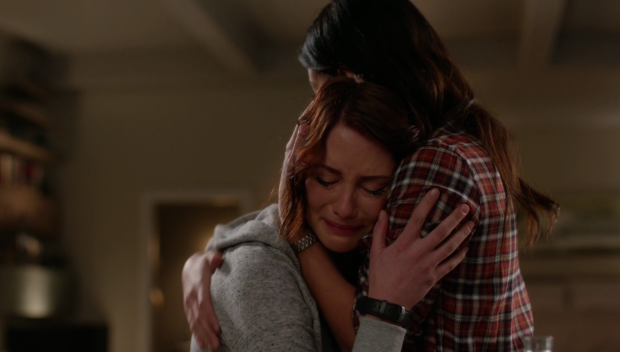 Alex feels the emotional weight of everything