Supergirl continues the totem hunt with Nyxly and the team racing against time to gain possession of the Totem of Humanity.

Fetch quests are a staple of genre storytelling as there’s often a particular artefact or collection of artefacts that are needed to carry out a particular plan. The heroes and villains scrambling to be the first to secure them is an easy setup for a tension filled plot as both parties scramble for the same thing. It isn’t always compelling to watch but it certainly forms a natural structure for a set of episodes to follow. 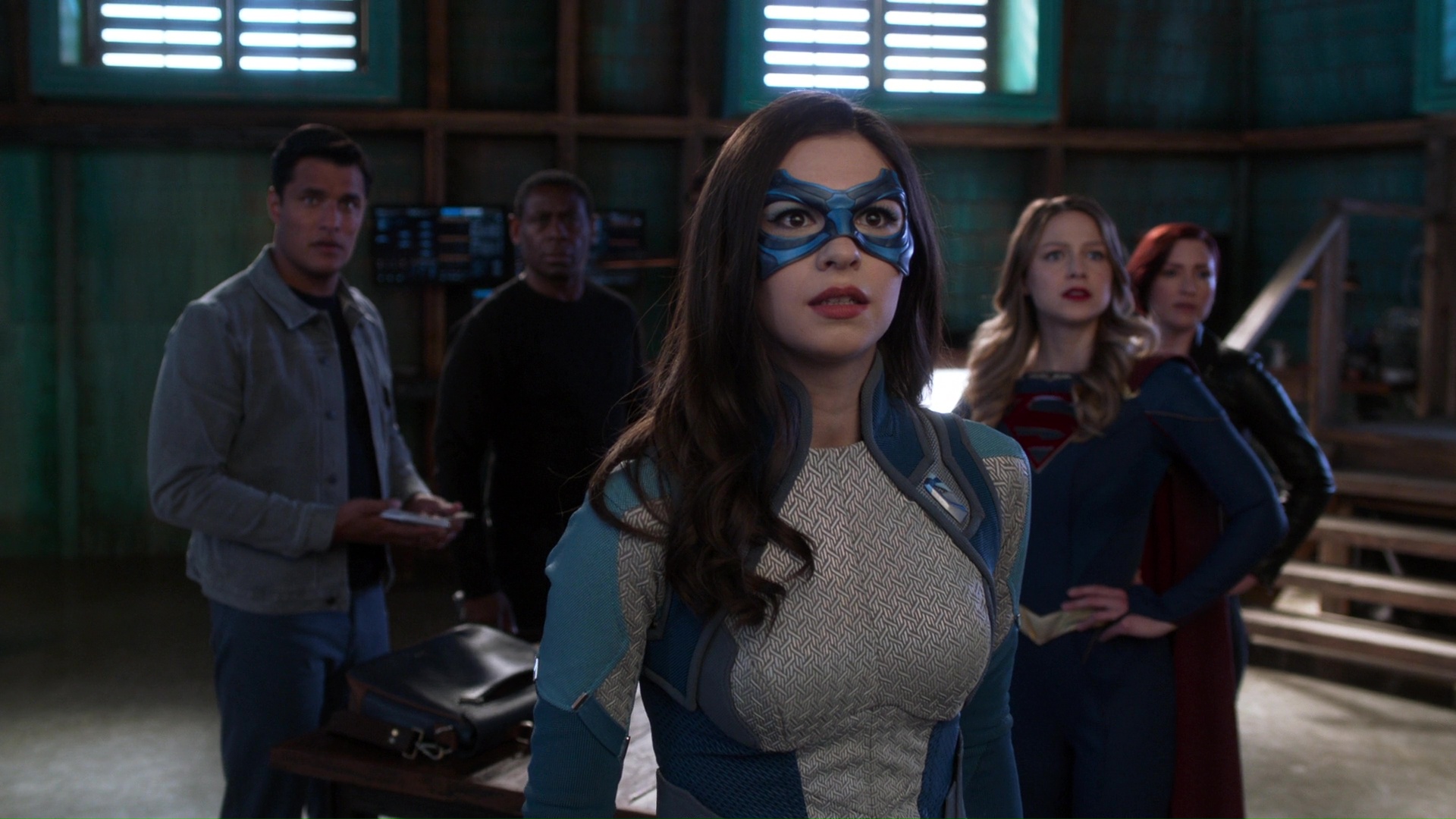 William gets a day in the life of Team Supergirl

Fortunately, Supergirl is so far managing to use the fetch quests to enable very strong character work. The story isn’t the Totems; the story is what the characters learn and experience while looking for them. This show has always boasted a strong cast and engaging characters so making them a priority will always be the best possible decision.

Nyxly continues to be a strong antagonist and a compelling presence on the show. Her connection to Kara isn’t quite being exploited to the fullest extent of its potential at this point but using it to justify Kara feeling overwhelmed with her focus entirely on stopping Nyxly is promising. Beginning the episode with Kara refusing to stop and enjoy game night while Nyxly is out there shows how obsessed she is with stopping a threat that she feels responsible for while also highlighting her altered mindset following her exile to the Phantom Zone. Previous seasons would see Kara able to distance herself from a given problem and enjoy moments of levity with those she cares about but she won’t allow herself to do that while Nyxly is still at large. It’s far from a healthy mindset and it’s a lesson that she still needs to learn. Kara being overcome with the happiness Nyxly is experiencing is a fun way to keep the connection active without meaningfully using it. Of course it will eventually be used in the opposite direction though what form that will take is unknown at this time.

Kara’s altered thinking and how unhealthy that is comes into play later in the episode when she tries to justify robbing the people of National City of their compassion in order to overwhelm Nyxly. Lena and Kara discuss the ethics of this plan with Kara occupying the point of view of it being justified because it harms people for the greater good. Lena argues the opposite which comes from bitter experience on her part. She was able to justify harming people in the name of what she thought was the greater good last season with her Non Nocere project and learned the hard way that she was on completely the wrong track with that. She is also starting to get used to her magical abilities and doesn’t want her relationship with these new powers to be defined by causing people harm regardless of the intent. Added to that is the knowledge that her mother was taken down a dark path due to similar thinking so Lena’s position on this debate is completely backed up through previous lessons she has learned. 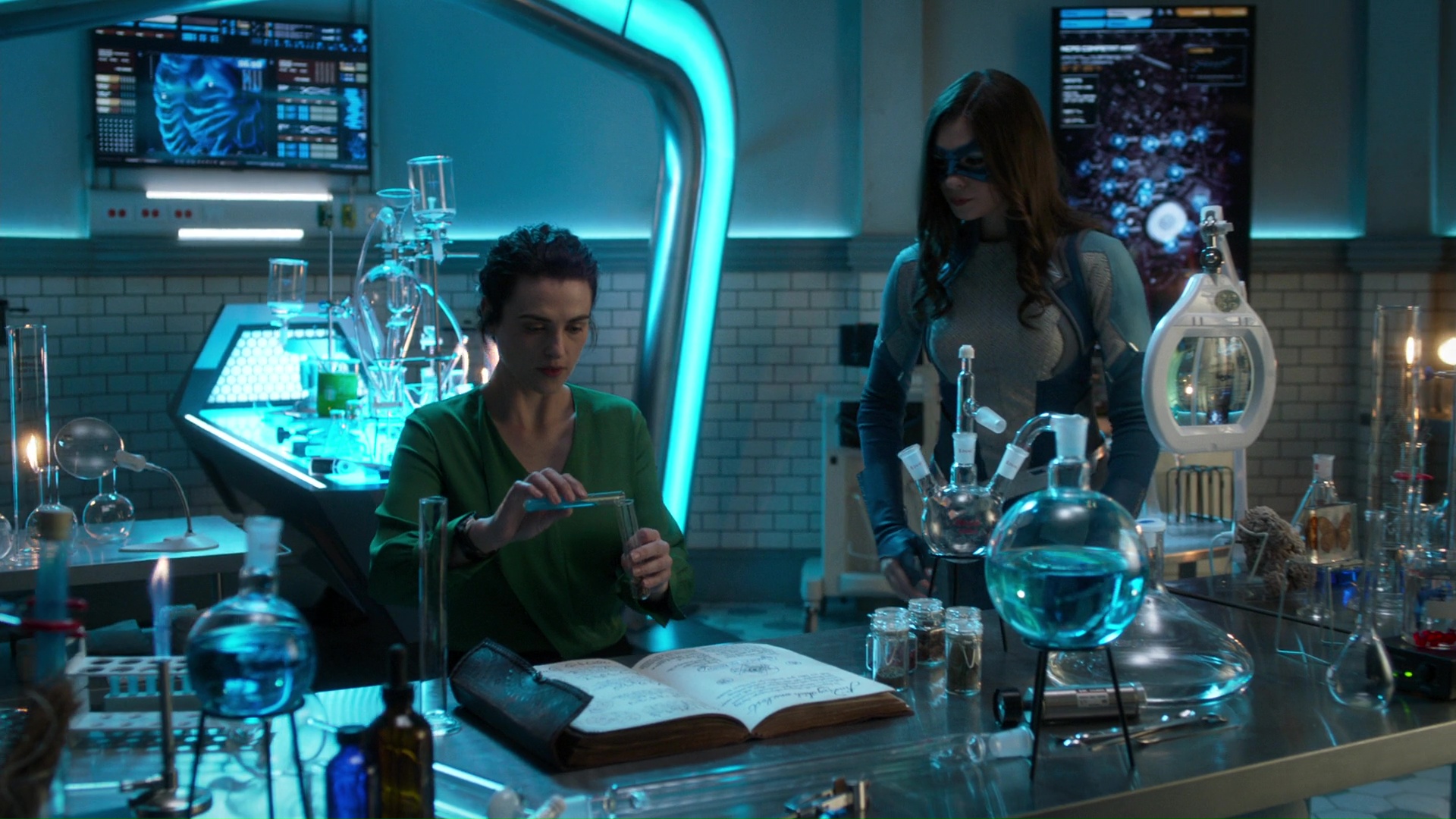 Can magic and science mix?

The problem around this debate comes in the resolution. Kara and Lena do agree that causing harm to innocent people is wrong which makes sense given their established morality but they also reach the conclusion that they can do whatever they want as long as William reports on it afterwards. William being embedded with Team Supergirl and reporting on their deeds from his perspective is a great idea that is working well for all sorts of reasons but the conclusion that they don’t have to worry about their actions because they’ll be judged by the people who will know everything about them makes very little sense. The show is attempting to say something about accountability and transparency through a superhero lens while also bringing in the responsibilities of journalism in terms of reporting the facts to people who can then form opinions on them but the execution is muddled and the decision made goes against what Team Supergirl are supposed to stand for.

Lena’s exploration of her magical heritage is shaping up to be a really meaty arc for her to follow. She is still wrestling with the distinction between magic and science with her approach being a wholly scientific one. In her mind she will be able to replicate a spell simply by getting the ingredients correct and isn’t equipped to understand why this approach doesn’t work. William puts her right using an analogy around his experience of learning to make recipes favoured by a lost loved one. He wasn’t able to get them right because he was fixated on the mechanics rather than the personal touch of the person making them. Lena is able to use that advice to understand where she’s going wrong and fix it. This positions William as much more than a simple fly on the wall commenting on Team Supergirl’s actions; he is an active participant and able to offer a great deal. Having him get mixed up in the action with some hand-to-hand combat was unnecessary but his perspective and experience is valuable.

Much of William’s contribution to the episode is centred around how he will go about doing his job. On one side he has Team Supergirl telling him that there are things he shouldn’t report on for various reasons and on the other he has Andrea telling him what stories she wants him to write. Initially he’s on the side of Team Supergirl and respects that there are things he shouldn’t report on because it might compromise them as individuals. Early on he thanks J’Onn for being open with him about his identity and very quickly learns that Alex is connected to the team through J’Onn which explains how Kara knows them without revealing Kara’s identity. William being so closely involved with the team presents a danger of him learning too much and I have no doubt that he will learn Kara’s secret before long. For now he respects that they are costumed heroes for a reason and initially agrees to their ground rules but later in the episode he concludes that he has to be true to himself, follow his gut and tell the story that he feels is right. Team Supergirl accept that and trust him to make the right decision where Andrea is less than pleased and moves his desk to an undesirable location. I feel as if the writers believe they’re making a more profound statement about journalism than is actually coming across but William’s overall contribution is still meaningful. 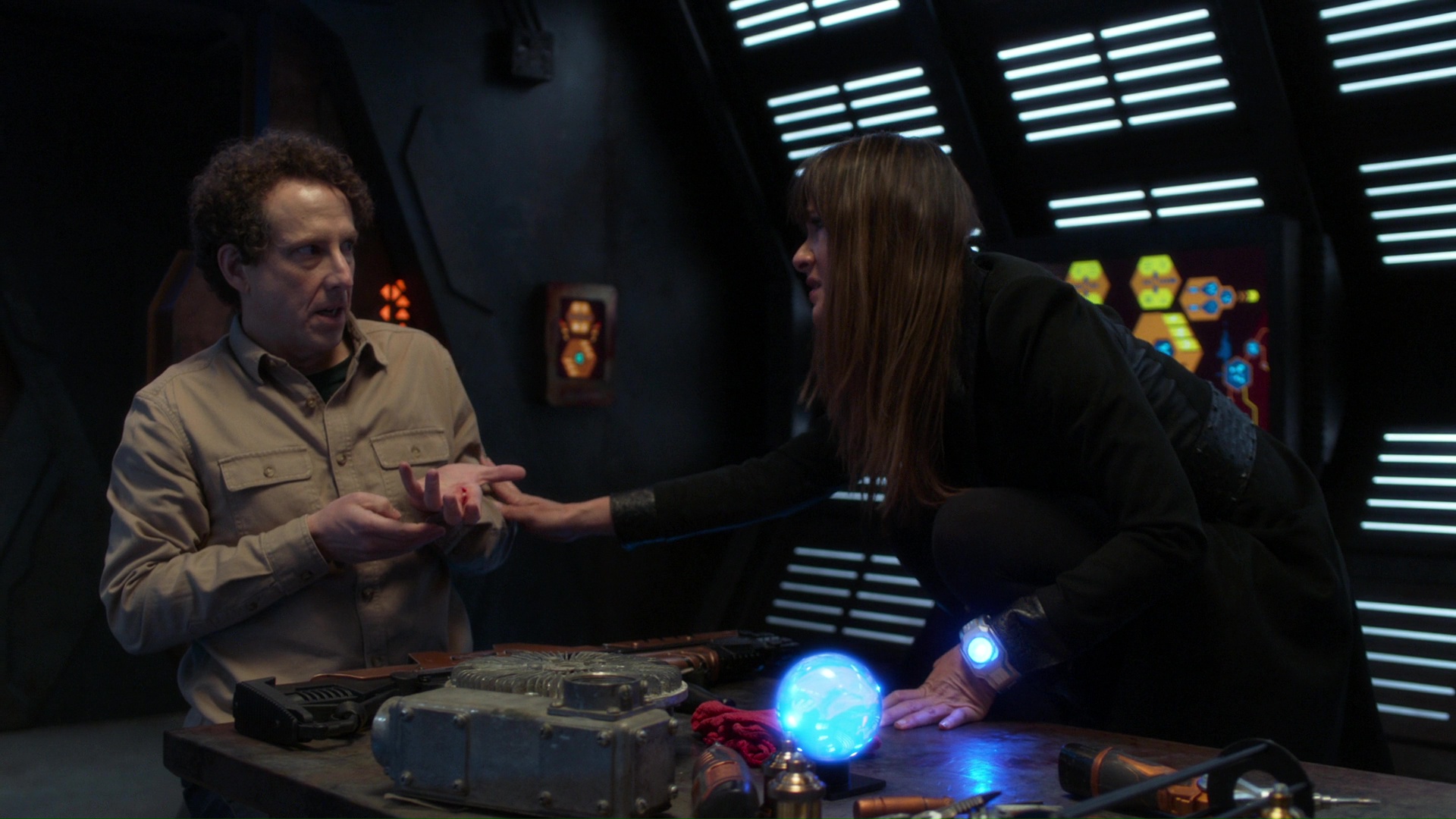 Nyxly’s current problem is she cares too much

Another notable addition is Kelly and Alex deciding to adopt Esme; a young orphaned alien in less than ideal foster circumstances. It’s very much an inevitable development but the episode absolutely earns it by showing the heart-warming exchange early on where Kelly leaves her with the foster parents and is given a bracelet Esme made her as a thank you for being there for her then those foster parents try to use her abilities to defend them while they cowardly hide inside the house. It is well established that Alex wants to be a mother and Kelly’s overall compassion for anyone who needs help is also strongly developed so their decision to take Esme in is fully justified. The scene itself is incredibly moving and the act strengthens their relationship considerably.

Nyxly’s contribution to the episode is excellent. The Totem of Humanity forces her to experience an overwhelming amount of empathy that she can’t process. Showing her unable to even get off the floor when thinking about hunger, poverty and disease along with her being able to wipe them out with no effort if she was at full strength is particularly effective. Peta Sergeant takes to the material wonderfully and everything contributes to making Nyxly a worthy final antagonist for Team Supergirl to deal with. There are still strong hints towards this plot ending with Nyxly seeing the error of her ways and using the Totems to explore different emotional states for her as well as the other characters is a really strong idea. The impact on the city was very similar to the previous episode but the impact on the characters is varied which is far more important. 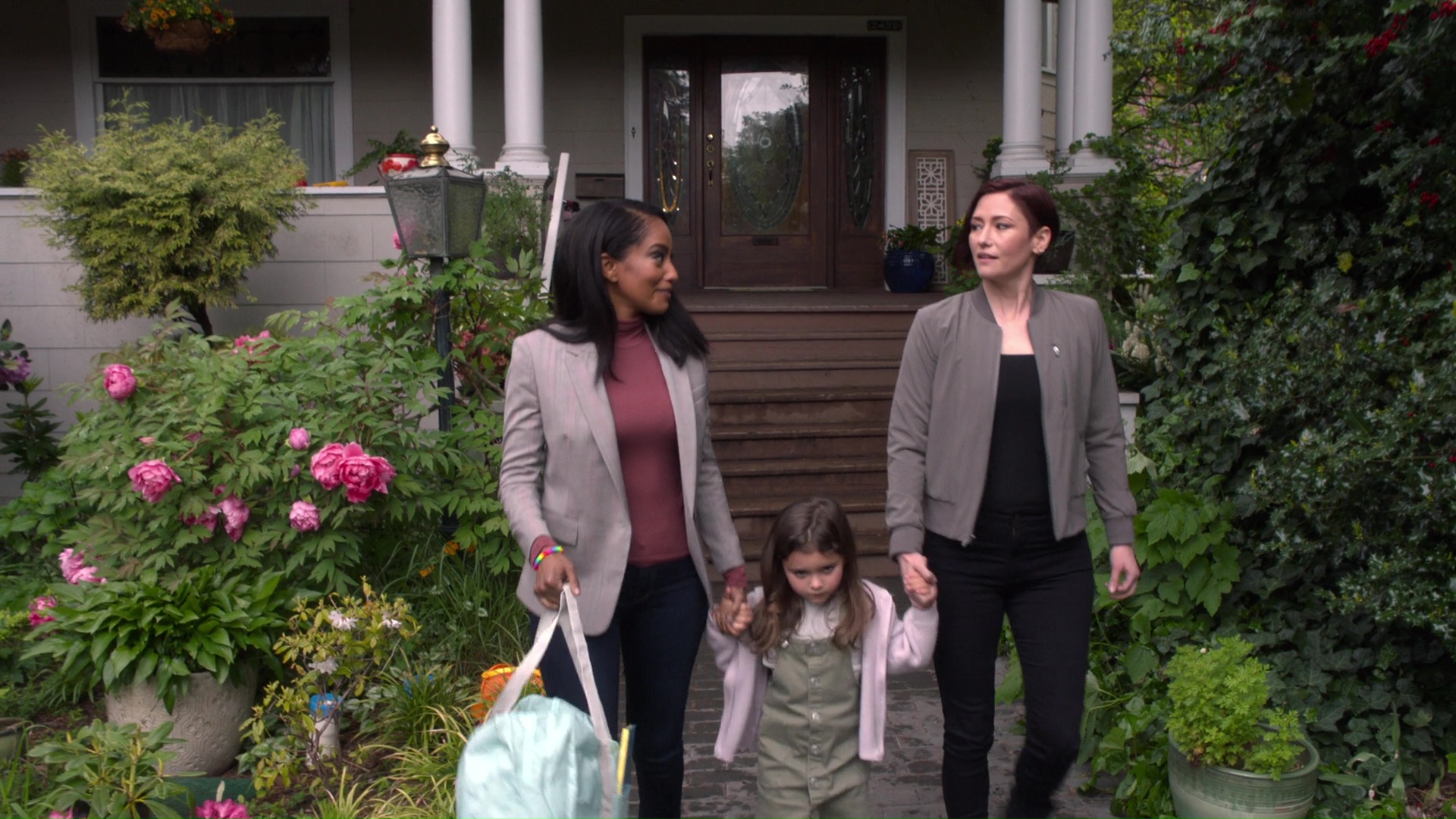 Looking to the future

A strong episode that uses the fetch quest setup to deliver meaningful and challenging content for many of the characters. Kara’s connection to Nyxly isn’t quite being exploited to its fullest extent at this point but using it to keep Kara aware of the threat Nyxly represents, feel a constant sense of responsibility for her being at large and refusing to relax until the problem is solved is a strong start. Kara is falling into unhealthy habits because of her obsession and this plays into how she operates in different ways. Her plan to allow Nyxly to sap the empathy from innocent people so that she becomes overwhelmed by the emotions is an example of her unhealthy outlook that provides an opportunity for a compelling debate with Lena. Lena is getting to grips with her magic and doesn’t want to define her relationship to it through bringing harm to others. Added to that is the knowledge that her mother went down a dark path for the greater good as well as her own experience with the intent behind the Non Nocere project. The debate falls down somewhat when they agree that hurting people is wrong no matter the circumstances but justify the action because William can report on it and hold them accountable to the people. The show is trying to say something about accountability, transparency and the role of journalism but the execution is muddled. William is used very well with his meaningful contribution that enables Lena to alter her thinking away from being wholly scientific. His decision to trust his gut rather than allow Team Supergirl to tell him what he can’t include or allow Andrea to dictate the type of story he should write works really well though having him contribute to the action sequences is unnecessary.

Kelly and Alex’ decision to adopt Esme was completely predictable but it was also earned by the work done to build up to their decision. It comes from their established traits and strengthens their relationship considerably. Nyxly remains a compelling character with some really strong work around the onslaught of empathy she had to deal with. She is positioned as a worthy final antagonist and there are still strong hints towards the conclusion being around her seeing the error of her ways.