I must admit to being surprised that the Medusa tease paid off so quickly. Normally these things linger for a long time. For a clear example see the Myriad plot last season. The mystery surrounding Medusa really isn’t all that complicated either. It’s a virus engineered by Kryptonians to target non Kryptonians in the event of an alien invasion. 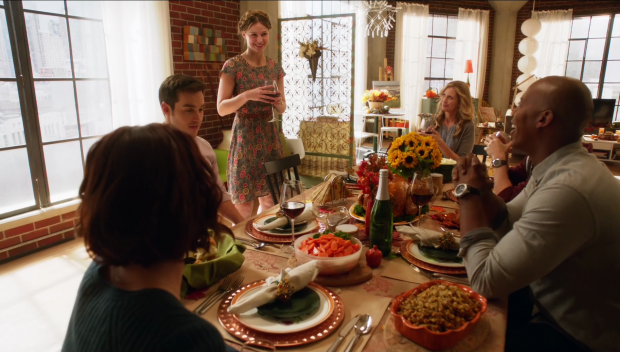 Thanksgiving with the Danvers family

It’s pretty nefarious on its own but the episode also manages to connect this to Kara in a really big way by revealing that her father engineered the virus. Kara has always had an idealised view of her birth parents that has already been shaken by her finding out her mother didn’t report her findings that Krypton was dying. Now her father wasn’t what she thought he was and it’s a lot for her to take. She finds herself completely lost as the memory of her parents that she was holding onto has been completely shattered. The fact that Zor’El never even thought to develop a cure makes the whole thing worse as Kara realises that he only cared about his own people.

The virus itself proved to be more of a means to an end than anything else. It was needed to move different plots forward so the details around it are somewhat lost in the background. One thing that really bothered me is that nobody addressed why it wasn’t killing humans if it’s supposed to target anyone who isn’t Kryptonian. Surely it would be re-engineered so that it targets anyone who isn’t human. It’s a gaping hole in the plot that nobody addresses.

J’Onn is on hand to provide some much needed perspective which leads to a really moving scene where J’Onn points out that Kara’s parents were people who made difficult choices and more than their share of mistakes but it doesn’t invalidate her in any way. They were able to produce a daughter who radiates empathy to everyone without exception. She can honour them by projecting their best qualities in her own actions and apply their desire to protect their own people to everyone. Essentially she can learn from her family without sharing their flaws. This is a really powerful lesson for Kara who takes a massive step forward in becoming the best version of herself and her family.

Lena has a similar problem when it comes to her family as the Luthors have a dark legacy that hangs over her no matter what she does. It’s a constant problem that weighs heavily on her and it comes to a head in this episode when Kara tells her that Lillian is the head of Cadmus. 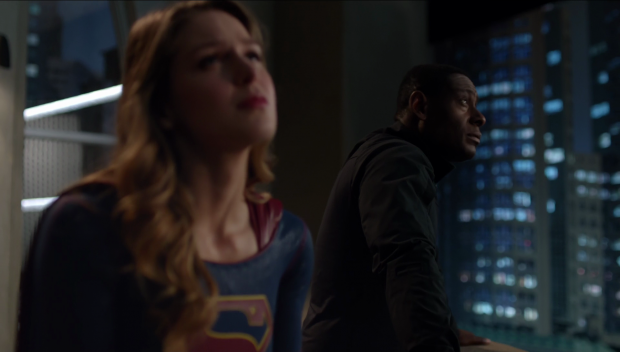 This causes an expected fake-out when Lena pretends to be seduced into helping her mother in order to gain her love only to betray her at the last second. Lena has been developed well enough since her introduction to feel like something she wouldn’t do so I saw the reveal coming. The important thing is that Lillian was willing to accept that her daughter was willing to compromise her apparent principles just so that she could be accepted and it definitely works on that level but trying to convince the audience that Lena might become a villain does a disservice to Lena’s character and the audience expectations of her by this point.

It also doesn’t help that Brenda Strong plays Lillian in a really cartoonish way. She’s far too over the top to let the mother/daughter scenes have the necessary weight to them. The contract in Katie McGrath’s vulnerable and layered performance is really staggering and these potentially effective scenes feel like they are missing a key component.

Hopefully now that Lena has made her feelings about her mother’s activities clear the show can move forward without any ambiguity surrounding her character. Lillian has been arrested thanks to her which definitely presents an opportunity for Cadmus to gain a more interesting leader and for Lena to have a different arc than being overshadowed by her family name. The next logical test for her in this space would be to bring Lex into the show or perhaps her father -would he be called Lionel?- but I can’t see that happening for a while.

Alex coming to terms with her new sexual orientation continues to be really interesting. We had Kara’s reaction to this recently and now we get to see how Eliza feels about it. I like that Alex didn’t even have to tell her as Eliza picked up on the signs all on her own. Eliza reacting as if it wasn’t a big deal too her at all was a really nice touch and felt very different to the reaction Kara had. This helps the show explore variations on how people might take the news with intolerance being the only one that we haven’t had yet. I doubt the show will go down this route as there are no characters who could really get away with feeling this way. 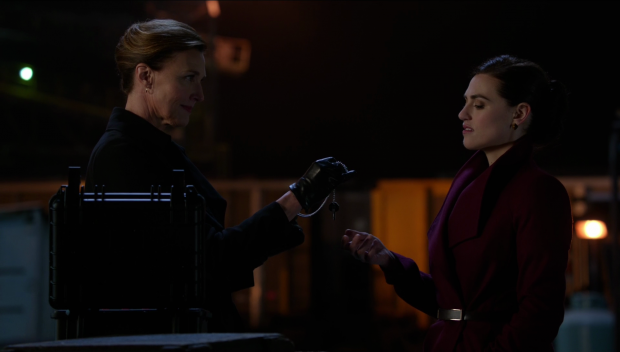 I like how gradual the progression has been on this plot as it mirrors the difficulties that Alex is having dealing with it. This episode marks her becoming more at peace with herself because she now knows who she is and things are really starting to make sense for her. I do feel that it is a little bit soon for Maggie to decide that she wants to be with her now and her near death experience feels like a flimsy justification for her suddenly changing her mind. Maybe giving into her passions in this way will create doubt for her in the coming episodes but I would have liked to see their connection develop more gradually than this.

Love is also in the air for Mon’El who confesses his feelings for Kara when under the influence of the Medusa virus before forgetting this confession. If Kara and Mon’El are to become a couple then that isn’t necessarily a bad thing but the way it is happening feels a little clumsy. Kara now knows about his feelings so it’s up to her to decide what to do about them but I wonder if Mon’El is too much of a playboy to settle into the kind of relationship that Kara wants to be in. Time will tell I suppose and the aliens that are looking for him are bound to add complications to this.

I found very cheap that J’Onn being infected by White Martian blood is resolved so quickly. Introducing the idea of him becoming a White Martian now feels pointless since it was so easily resolved. I wonder if the writers brought this in because they felt it might be a stronger narrative than it actually is then didn’t know what to do with it. At least we got to see him in a transitional phase which looked really cool.

This episode wasn’t short on action mostly provided by Hank Henshaw who still goes by the Cyborg Superman for some reason. We see that he has his own version of heat vision and super speed so his abilities are more closely resembling Kara’s at this point. It’s a shame that the episode doesn’t do more with the real Hank Henshaw taking on the man who stole his life as that could have been a really strong character driven conflict as well as the effects filled battle that we saw. It was fine as is but making more of this would have added much more weight to it. As a character Hank still isn’t that interesting but maybe he’ll have the opportunity to step up now that Lillian is out of the picture. 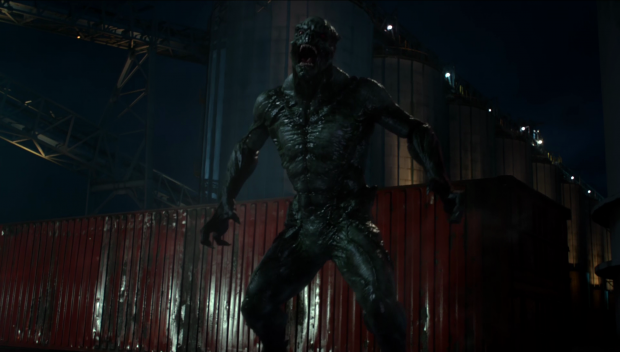 Over the rest of the week we have the big crossover that brings together Supergirl, The Flash, Green Arrow and the Legends of Tomorrow to face against a common threat. We get a major tease of this in this episode with breaches opening twice before Barry and Cisco come through the third to ask Kara for help. It’s a very small tease but having the breaches crop up periodically stops it from feeling removed from the events of the episode. In one instance it provided a much needed distraction in a battle against Hank Henshaw so it was definitely part of the episode. There was some quick information dropped about the state of Barry and Cisco’s friendship at this point. Cisco only sees Barry as someone he works with following what he learned in the most recent episode of The Flash. The crossover is an exciting prospect and I look forward to seeing if the three part story we are about to see will actually work.

A solid episode that nails a lot of the characterisation but misses the mark on others. Kara coming to terms with her parents not quite meeting her expectations is really powerful and the conversation she has with J’Onn that brings much needed perspective is a really well done moment. Lena’s issues with her mother are problematic due to Brenda Strong’s over the top performance preventing the real emotion to sink in which is a shame because Katie McGrath does a great job in these scenes. It’s also disappointing that J’Onn is completely cured of his White Martian affliction which renders this plot point fairly pointless. There is also an opportunity missed to ground the real Hank Henshaw taking on the imposter in any kind of emotional depth.

Eliza’s reaction to Alex coming out was really well handled as it was different to the reaction Kara had which allows us to see different sides of how people feel about the news. All we’re missing now is intolerance but I doubt this will happen. The Mon’El/Kara romance has some potential but it’s in the very early days and it could really go either way at this point. I’m sure those aliens looking for Mon’El will complicate matters too.

It’s crossover time for the rest of the week and the slight tease got me excited. I liked how it managed to be part of the episode so that it doesn’t feel like a throwaway. 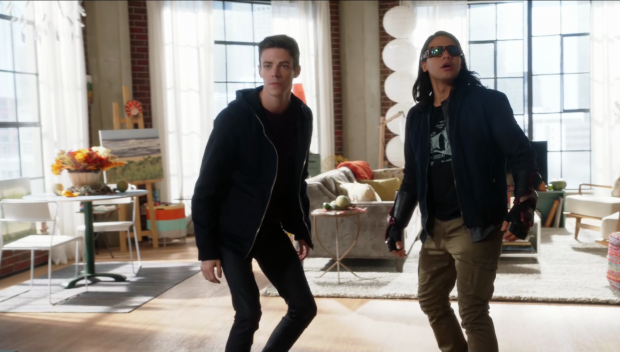 Strange visitors from another universe