Supergirl deals with the Alex/Maggie break-up with a return to the girls’ childhood home in Midvale to relive their youth and work through their issues.

Post break-up episodes are often a slog, especially on CW shows as characters are regularly depicted as being unrealistically broken and the whole experience can be frustratingly consumed by angst. Readers of this site will know that I am not a fan of melodrama so personally would struggle with an episode like that. 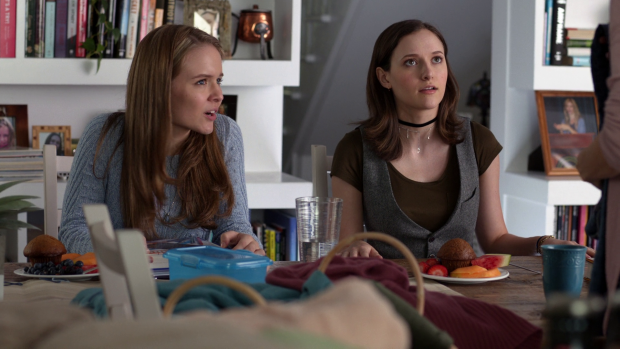 In some ways the writers managed to find a unique way to deal with the recent upheaval in Alex’s life through flashing back to the shared youth of Alex and Kara. The whole concept of returning home to refocus priorities before rejoining the real world has merit as well. On a symbolic level returning to your childhood home is returning to a safe, happy and uncomplicated place where the focus can be on recovery.

The episode works really well on that score. Midvale is characterised as a warm and welcoming place and Eliza Danvers’ motherly demeanour is a natural source of strength and sympathy for all the Danvers sisters have been through. Helen Slater does a really good job this episode playing up the maternal rapport she has with Melissa Benoist in particular. In theory this episode is about Alex though Eliza’s focus is on making sure that Kara is actually alright rather simply pretending to be. The scene on the porch is a good reminder that Kara might be a superhero but she’s also a person and there’s no shame in admitting that things are getting on top of her. It isn’t the focus of the episode but it serves as a reminder that she isn’t handling things as well as she pretends she is.

It also serves another important purpose. Eliza helping Kara to realise that she has a long way to go before she gets over the loss of Mon’El also shows that she isn’t in the right place emotionally to help Alex through her heartbreak. Alex doesn’t respond well to Kara’s platitudes and reminds her that all she says is pretty hypocritical considering Kara spent 6 months cutting herself off from everyone closest to her. It strikes a nerve for Kara and she gives up attempting to make Kara feel better. It’s such a small scene but it shows the emotional anguish being experienced by both of them. 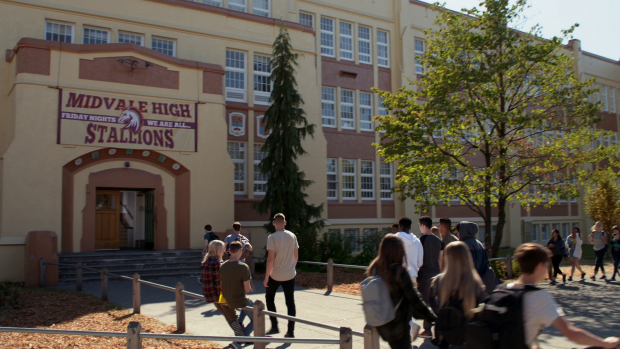 Having this all but resolved by the end of the episode feels somewhat cheap as nothing has really happened to resolve the issue other than a good night’s sleep though it could be seen as Alex gaining a little perspective and realises that the only way they’ll get through their collective heartbreak is together. If that’s the intention then it doesn’t really come across but the post wake up scene is very strong with excellent performances from both Melissa Benoist and Chyler Leigh. Similarly the end scene of them driving home singing along to cheesy music is a really nice character moment highlighting the sisterly bond that is now stronger than ever.

Despite me spending so much of this review talking about Alex and Kara’s return to Midvale it’s actually a really small part of the episode. These scenes only serve as bookends to the real story of a teenage Alex and Kara attending Midvale High School. I suspect that this was a production decision to free Melissa Benoist and Chyler Leigh up for filming the crossover but I don’t know for sure. Whatever the reason is it makes for a fun departure from the norm that shows how the sisterly bond began.

The handling of this flashback narrative was a little clumsy as it doesn’t really feed into the present day scenes. Arrow had flashbacks as part of its episode structure and tied them to the present day events either on a plot level or a thematic level. At their best they were relevant and the connections felt deliberate but here it’s feels like an episode of a different TV show within this one. If I didn’t know better I’d believe that this was a back door pilot for a young Kara TV show. 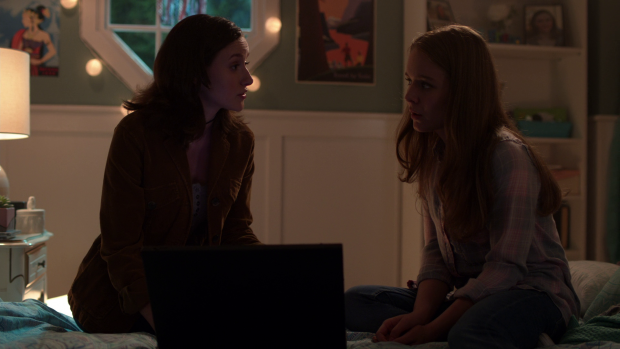 Despite the lack of relevance to the present day events I enjoyed this an awful lot. Izabela Vidovic makes for a great young Kara and Olivia Nikkanen is an excellent young Alex. They have a natural chemistry with one another and create a relationship that feels confrontational in a familial sort of way.

There are lots of nice little touches that deliver more insight into what life was like for both of them growing up. Kara is still struggling to fit in as human at this point in her life because the adjustment to hiding her powers is difficult for her. School is far too easy because Kryptonian education is so much more advanced for those her age and she feels that it’s all pointless. Its mentioned that the events of this flashback are how she became Kara Danvers which suggests that this experience encouraged her to work at being more human.

It’s established that she isn’t having the best time at Midvale High as she has very few friends, is ostracised for being weird and actively ignored by her own sister who sits at her table as part of the “in crowd”. Alex is clearly still resentful of the fact that Kara has been adopted and is taking a lot of the attention away from her which rings true to what has been established prior to this. Kara resents the situation entirely as I’ve mentioned above as she feels that school is beneath her. It’s a very different side to character and it was interesting to see her with a little more attitude than we’re used to even if she was played by a different actress. 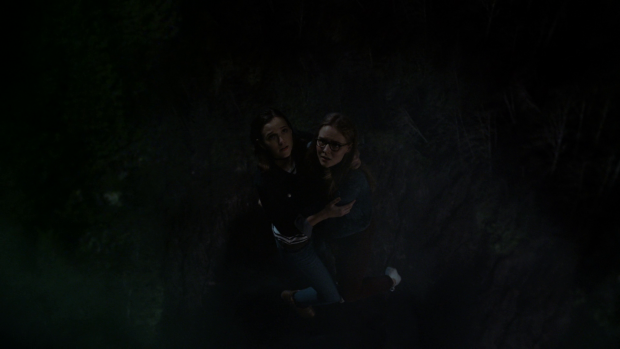 There is an exception to Kara’s resentment in the form of Kenny (Ivan Mok) who Kara calls her only friend. There’s an obvious connection between them shown wonderfully during the scene where he invites her stargazing and they almost kiss. It quickly does enough to establish Kenny’s importance to Kara and makes his death more impactful than it otherwise would have been. The fact that it happens just after they were together helps motivate Kara because she feels a measure of responsibility since she didn’t stick around long enough to be able to stop it.

This is where the Smallville connection comes in. Characters working together to solve a crime was very much a staple of high school era Smallville and it works well here. It’s obvious that the format of the episode is a deliberate reference considering the off screen input from Clark’s friend Chloe who sends some plot furthering e-mails.

Kara and Alex working together to find the guilty party creates a lot of fun moments for them. The jump from them being at odds with one another to working together is very swift but in context it really works. They make a good team just as we have always seen and the investigation moves along at a reasonable clip though there are far too many elements thrown in to complicate it. 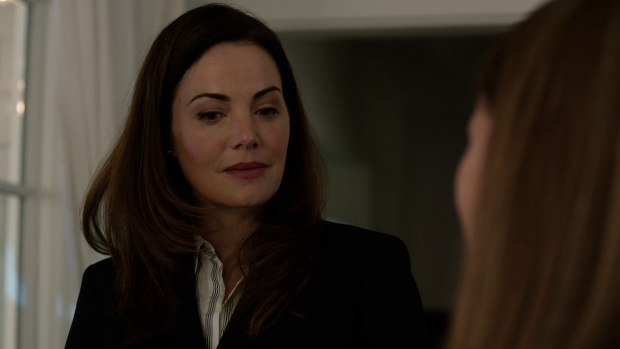 J’Onn has made better decisions…

The murder mystery was more than enough to carry the episode without the addition of secret love affairs between teachers and students and drug smuggling operations in Midvale. This is a good way to add depth but since this is just one story it would have been better to focus on one thing. I will give praise for calling a spade a spade and making reference to statutory rape when it comes to the teacher/student relationship. It’s also a reasonably effective red herring as Kara and Alex both assume that the teacher is guilty when he actually isn’t showing that refinement is required in their investigation skills.

Young Kara’s journey is about finding a balance between living a human life and using her powers to help people. Her desire to help seems to be innate as repeated reference is made to it throughout the episode but Eliza tries to temper this with warnings that it’s dangerous to use her powers in public. She reinforces that by bringing in Agent Noel Neill -J’Onn in disguise- (Erica Durance) who tries to offer emotional support while encouraging Kara to keep her abilities hidden. As scenes go this one was baffling as I found it difficult to accept that J’Onn would go through with deceiving Kara in such a way. Assuming the form of her birth mother and using that to throw her off balance is really low and definitely not in keeping with his character.

I also question the scenario itself; is it common for Eliza to invite DEO Agents over to give Kara a stern talking to? The episode plays it as if it’s a fairly common thing but I can’t imagine why that would be. Despite that Erica Durance gave a good performance and Kara getting to sort of tell her mother that she loves her was a nice moment.

The ending of the episode seems to suggest that this is Kara’s flashback though only in a TV sense as events are seen that she isn’t present to witness. It’s a conceit common to these types of stories and doesn’t bring it down too much. The reason I say that it seems to be Kara’s flashback is because she makes reference to Kenny being the first person she lost on Earth so the connective tissues comes from her thinking about the loss of Kevin. Perhaps reliving the events was Kara’s dream as she brings out the telescope when she wakes up. As I’ve said it’s a loose connection that the episode could have made a lot clearer. 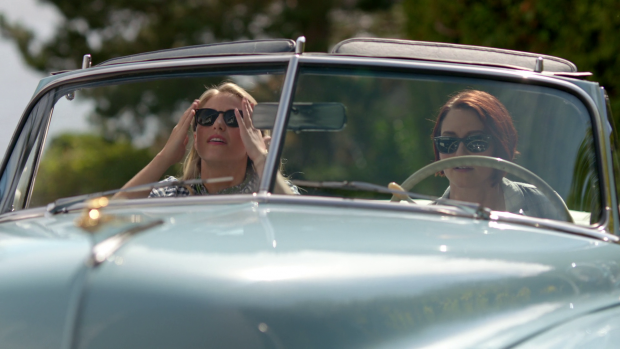 A fun off format adventure that references early Smallville in the best way. The episode fails to establish a solid connection between the two narratives though the present day only bookends the story for what I suspect is crossover scheduling related. The present day sections establish that Kara is only pretending to be handling her break-up well and isn’t really in the right emotional place to help Alex through hers. By the end of the episode they mutually realise that they will need to help each other cope and the sisterly bond is stronger than ever.

The flashback story is a lot of fun with really talented actors playing the younger versions of Kara and Alex. It’s almost a fun back door pilot for a show that we will probably never see that shows the beginnings of Kara and Alex’s close sisterly bond as well as the events that made Kara embrace her humanity. The murder mystery plot works well though is a little overstuffed and it’s great to see a version of Kara with more attitude. Any attempt to connect it to the present day conflict doesn’t quite work but it’s a really fun diversion all the same.