Supergirl delivers a Valentine’s Day episode when a 5th dimensional being arrives looking to woo Kara into becoming his wife in exchange for Earth being left alone.

It’s a little bizarre having a Valentine’s Day themed episode the week after the day itself but there’s no denying that this episode allows the show to explore its core romantic relationships. The arrival of Mr. Mxyzptlk (Peter Gadiot) -hereafter referred to as Mxy- allow Kara and Mon’El’s will they/won’t they dynamic to be tested through how he reacts to a rival for Kara’s affections. 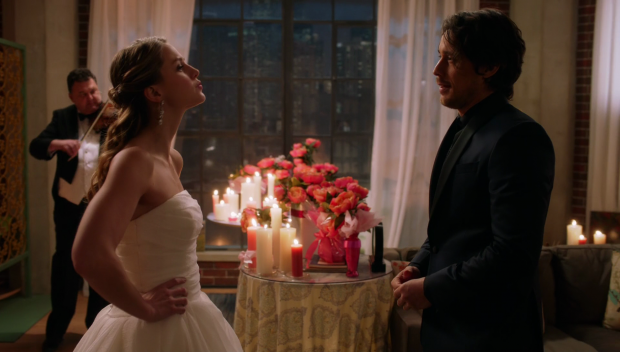 Kara is less than impressed with Mxy’s advances

It could be argued that Mon’El was being completely unreasonable in this episode because it was abundantly clear that Kara had absolutely no interest in Mxy and saw him as a dangerous annoyance that she needs to get rid of. Mon’El’s reaction was completely unreasonable and is treated as such but he admits that he’s jealous so that validates any unreasonable behaviour that he exhibits from a story perspective. Jealousy is a completely irrational emotion and Mon’El simply gives into it without being able to consider the consequences of his actions. He was about to start something last week with Kara and now a powerful being shows up with the ability to give her anything she desires so he overreacts in a major way.

Chris Wood delivers a constantly engaging performance in this episode with Mon’El’s jealousy making him act in a really petty way throughout. Jealousy so rarely comes across believably but he completely nails the childish reactions that often go hand in hand with the emotion. The scenes he shared with Melissa Benoist where Mon’El and Kara were bickering were also great. The actors have always had great chemistry and I enjoyed seeing them argue like an old married couple. It suggests to me that there might be more to their relationship than raw chemistry.

I also liked Kara’s reaction to Mon’El’s jealousy as she calls him out on his childish behaviour. She isn’t happy with his desire to defend her honour because she is more than happy to defend her own honour. Mon’El’s heart is in the right place but he has a sexist attitude to the whole thing as he believes Kara is someone who needs to be protected despite being more powerful than he is. It’s an interesting dynamic and allows the show to put forward a feminist point of view on the whole “man protects woman” attitude without making it seem unearned or preachy. We know Kara well enough to know that she is very confident in her ability to be self sufficient so it makes sense for her to not tolerate anyone trying to get in the way of that. Of course there are situations where she stubbornly doesn’t accept help from others but this isn’t one of them. I imagine this will be something that plagues their relationship as time goes on.

The end of the episode where they finally got together feels earned because of the struggle they both experience to get to this point. I was actually expecting those aliens that have been hunting him to show up just before they kissed because the scene played out almost the same as the scene from last week except that there wasn’t an interruption. It’s refreshing to see some forward momentum on a relationship without more tiresome stalling tactics. 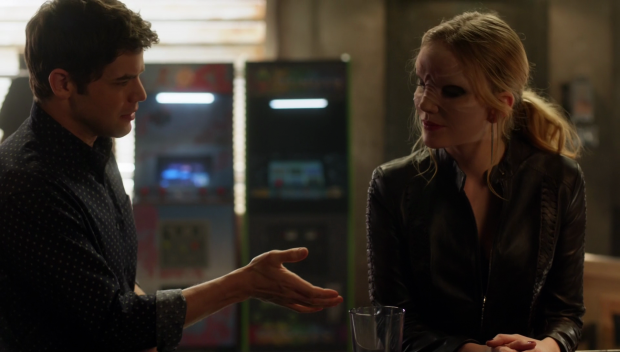 Winn meets his diversion for the evening

Mxy was a great character and I’m glad that his comic book origins were mostly preserved. Peter Gadiot doesn’t look like the comic book version but everything else is there despite him being one of the more bizarre characters in the comic canon. Peter Gadiot’s performance is well suited to this character as he is playful but hides a sinister edge at times. The way he delivers the ultimatum about Earth being in danger as long as Kara refuses to marry him shows just how dangerous he can be when he doesn’t get what he wants. This was always going to be a difficult character to do and it really works that the show approaches him with a light touch while still having him be a viable threat. It’s a thin line and the writing as well as the acting tows it well.

He was responsible for a few entertaining moments throughtout the episode. The Aladdin references as he tried to woo Kara in the beginning immediately established him as being a fun character and it made for a fun yet chaotic sequence. Creating a battle against Parasite was a nice touch as well as he was one of the stronger villains from a visual point of view so having him around showed the threat level that Mxy was capable of causing. I also got a kick out of him showing up in a modified version of Superman’s costume. Playful yet sinister is definitely the order of the day and both of those was established in the Parasite sequence. Special attention should be given to Kara fighting a giant Jor’El ice sculpture as well.

I loved the way Mxy was defeated. In the comics the only way to get rid of him is for him to say or write his name backwards. When he does this he returns to the 5th dimension for a period of time. For a while it doesn’t seem like the episode is going to go down this route as Mon’El mentions that Mxy isn’t stupid enough to fall for it but Kara comes up with a brilliant solution involving a self destructing fortress and Kryptonian writing. It’s good to see Kara defeat someone by deceiving them and thinking her way of the problem. There hasn’t been enough of that in this show and it works really well here. I dare say Mxy will be back as well so the challenge for the writers will be continuing to come up with creative ways to defeat him. That’s not a problem for now though.

This episode uses the backdrop of Valentine’s Day to further explore Alex and Maggie’s relationship. Alex is somewhat giddy about her first Valentine’s Day with Maggie but Maggie doesn’t share that sentiment because she thinks it’s essentially a scam to sell cards, chocolates and flowers. It’s a valid viewpoint shared by many people so it seems fair enough that she would think that way. Her reaction when Alex tried to make it special anyway wasn’t all that reasonable which naturally shows us that there is much more to it than that. 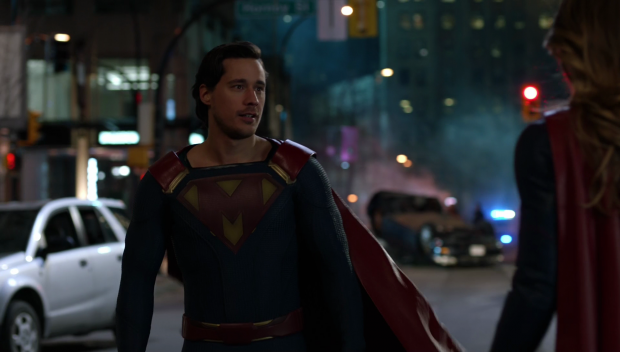 Mxy tries to dress to impress

Maggie telling the real story of her coming out to Alex was really well acted and gives the audience a subtle origin for Maggie’s “tough girl” attitude. The level of rejection from her peers and her parents when she came out in high school is a really heartbreaking thing to contemplate and Alex being upset that Maggie couldn’t be honest with her made the conversation feel very real.

It takes Kara’s meddling to make Maggie realise that Alex meant no harm and just wanted to do something nice for her which causes her to do a double take and make up for her behaviour. This was a really good example of using conflict to make a relationship evolve in a way that feels natural. Maggie and Alex are one of the most engaging TV couples I’ve seen because they are able to have issues that threaten to drive them apart before making their connection stronger. It’s rare to see and incredibly well handled.

The weak link this week was Winn who has his own romantic subplot on the go that comes out of nowhere. We’ve had precious little from him in terms of meaty stories this season so giving him some focus is good but the story itself left a lot to be desired. The setup of him meeting Lyra (Tamsin Merchant) was really clunky and never came across as believable. She goes from saving him from a beating to being passionately attracted to him just because he talks about a book that she had read to her as a child. If the writers want to give Winn a relationship to give his character something to do then I’m all for it but it has to be on better grounds than we see here. It’s possible that this could develop to be a really interesting alien on Earth story as time goes on since she doesn’t look human but it’s not a great start.

Another issue with it is that the show hasn’t been all that consistent with how National City views its alien population. Most of the time we see them frequent the bar which works as it’s a safe haven for non humans but we see Lyra casually going to a restaurant. She’s met with funny looks but there doesn’t seem to be any problem with her being in public places beyond that. 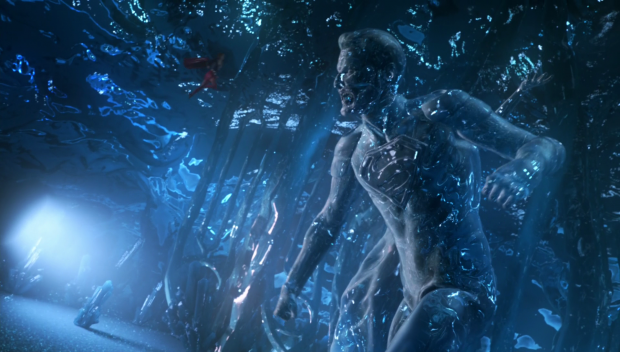 Kara’s having a very unusual day

This brings me to a problem that this season has had in general. The writers haven’t really found anything to focus on. There are a lot of interesting things going on but most of them aren’t being developed in any meaningful way. Alien Amnesty could have been a major arc this season but it has become part of the furniture now, Kara finding a way to balance her life as Supergirl with her new career as a journalist is another arc that comes and goes and the relationship development blends in there somewhere. Cadmus doesn’t seem like all that urgent a threat at the best of times so I’m wondering when or if the season will ever become about something. The other CW superhero shows have clear arcs that they are following so I’m puzzled as to why Supergirl doesn’t have the same.

A fun episode that found an effective way to use Mr. Mxyzptlk. The episode treats him with a light touch but also still allows him to come across as a threat while becoming the cause of some really engaging action sequences. Peter Gadiot delivers a really good performance and the way the character is defeated is refreshing as it involves Kara thinking her way out of a problem. Mon’El being jealous of Mxy also works well as it plays like real jealousy since it’s a completely irrational emotion and is treated as such. Chris Wood and Melissa Benoist are brilliant when their characters are bickering and I’m glad there wasn’t a predictable last second stop when they kissed at the end of the episode.

Alex and Maggie’s relationship is done really well here and shows that conflict can be written into a relationship that allows it to evolve in a natural way. Their interactions and the insight into Maggie’s character is done brilliantly here and should be commended. Winn is the weak link with a relationship that completely comes out of nowhere. It’s good that Winn is getting more to do but this definitely could have used a lot of work. It’s possible that Lyra could be used in a really interesting alien on Earth story especially since she doesn’t look human but that remains to be seen. 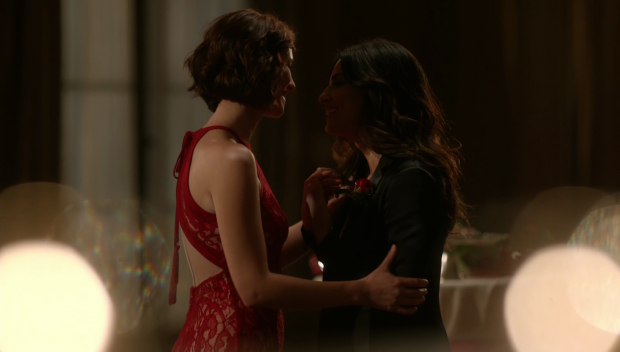 Maggie warms up to Valentine’s Day