Supergirl Returns! From hiatus that is. Kara investigates a missing person’s case and ends up on an alien planet.

Before I start the review I’ll open with a prediction that there will eventually be an episode of Supergirl called “Supergirl Returns” especially since the title of this episode, “Supergirl Lives” is a reference to director Kevin Smith’s unmade Superman script. 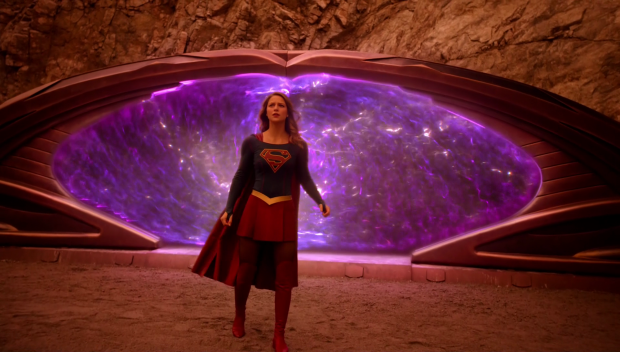 Not on Earth any more

A lot happened before the midseason break but other than the odd reference here and there a lot of that seems to be resolved and the show is ready to move onto other stories. The most connective story is Alex’s relationship with  Maggie which allows Alex to behave in ways that we don’t normally see from her. Alex and Maggie’s scenes together are great to watch as it’s interesting to see Maggie removed from the emotionally distant way she usually conducts herself. As a couple they feel natural which helps things because I’ve seen relationships in TV shows feel forced so many times.

The conflict they face in this episode feels very forced though. Once Kara goes missing Alex blames herself and takes it out on Maggie without meaning to. Her frustration comes from the fact that she let her own happiness get in the way of her responsibilities so she feels that Kara’s disappearance is entirely her fault. This is all well worn ground and nothing particularly interesting is done with it in this instance so it just feels like a cheap attempt to manufacture problems in a new relationship so that a reconciliation can be reached by the end. I did like that Maggie has figured out Kara’s secret identity and pokes fun at the glasses disguise. At least there was something salvageable from the unnecessary melodrama.

Kara’s arc feels somewhat manufactured as well but it works within the context of the episode. It is established at the beginning that crime fighting isn’t doing it for her as she feels that she isn’t really helping people. She has a desire to make a measurable difference in someone’s life rather than returning stolen goods to where they were stolen from. This leads into the missing persons case that she becomes very passionate about. It’s a clear way to make a tangible difference to someone else’s life that she can be proud of. Kara is at least partially in the superhero business for the sense of self satisfaction and there’s nothing outwardly wrong with that.

The missing persons case also allows a part of her life that has been lacking to be beefed up. Her decision to pursue a career as a reporter has been problematic as it has felt contrary to everything else that has been going on. Snapper Carr has never felt like a good fit for the show and the reporter aspect has felt somewhat meaningless. This episode goes some of the way towards improving that by giving Kara a story to sink her teeth into that feeds into her dual identity. She can investigate the story as Kara, take action as Supergirl and write about it as Kara afterwards. It’s an obvious formula but it works because it makes both sides of Kara get in a way that benefits the show. 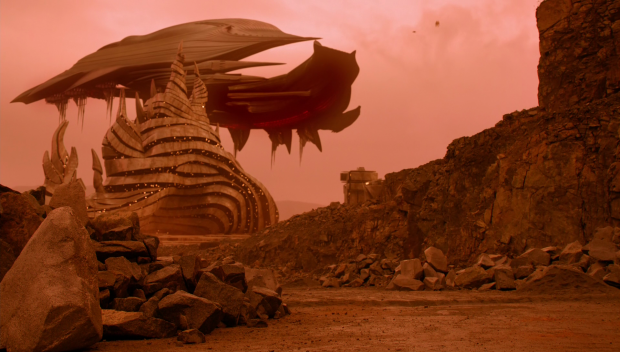 Definitely not on Earth

Snapper Carr still doesn’t work as a character because his hard nosed attitude is largely played for laughs which means that it doesn’t come across as challenging as it needs to. His compliment to Kara when she isn’t in the room feels unearned even if the sentiment of Kara figuring out what kind of reporter she wants to be by sticking to her convictions and being proud of her passions comes across as a natural development.

The people trafficking to an alien planet story had its problems as well. Travelling to an alien planet and being stranded there should have been a much bigger deal than it was but it felt like an easily solved minor inconvenience. A lot of that was down to the lack of stakes surrounding this. Once the portal closed there should have been a real sense of hopelessness at that point but Kara and Mon’El behave as if the situation will resolve itself even though nobody knows where they are.

With a few modifications this could have been a really strong story as Kara and Mon’El were left powerless on an alien world with no real hope of rescue. I understand that this was another of those “you don’t need powers to be a hero” life lesson episodes but this could still have been done with the dangers of the situation being a big part of the story. If Kara had been more afraid then realised that she had what it takes to be a hero her self sacrifice would have been a much more powerful gesture.

Another thing that fails to register is the very serious world issue of human trafficking. The episode misses a trick on using science fiction to explore this problem in anything beyond the superficial. It’s a problem this show tends to have when dealing with issues and it really shows in the way the episode plays out. 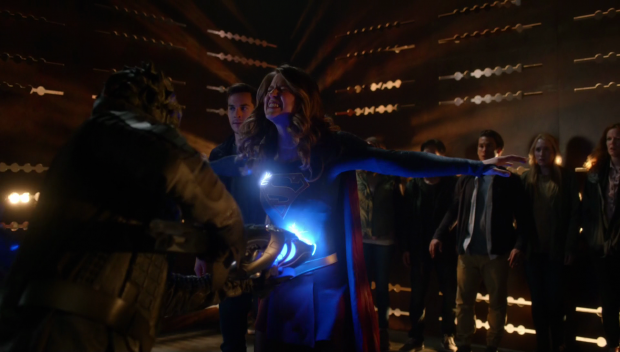 Powers or not, she’s still a hero

The villains didn’t help matters as they were largely unmemorable. Roulette returns as part of this plot but her presence doesn’t feel worthwhile and the episode would have been largely unchanged had she not been there at all. Her partner played by James Urbaniak was watchable when he appeared but his threat level wasn’t significant enough. It was cool to see a Dominator as well as one of their ships so soon after the crossover last year. In terms of contribution to the plot it could have been any alien but it was a nice touch.

It was a smart idea to have the multiple disappearances anchored by the fact that Kara started by investigating the missing Izzy Williams (Harley Quinn Smith). This stopped the scope of the problem feeling too broad and allows the audience to put a face on the sense of loss. Smith does a good job playing this character in the brief scenes that she appears and her tearful reunion with her mother offers meaningful closure on the story.

Having Mon’El along for the ride on the alien planet provided an effective counter to Kara’s determination to solve the problem despite the lack of powers. He was the doubter in the situation and made valid points about their diminished effectiveness before eventually being inspired to try anyway because of Kara’s “never say die” attitude. This pays off when he tells her that he really wants to give the hero thing a try but I still think this development is happening too quickly for Mon’El as his natural state doesn’t feel heroic. Maybe this will play out better than the poorly developed James as Guardian story and Mon’El being a reluctant hero will be an ongoing arc.

It seems that the mystery surrounding Mon’El has pretty much been solved. The Dominator pretty much bows before him rather than attacking him and the mention of the Prince earlier in the episode suggests to me that he is the Prince. One thing I can’t figure out is why he goes by Mon’El rather than the comic book name of Lar Gand. I’m fairly sure that reveal will soon be coming but I’m not sure why he would go by that alias and why the people hunting him would call him by that either. Time will tell I suppose. 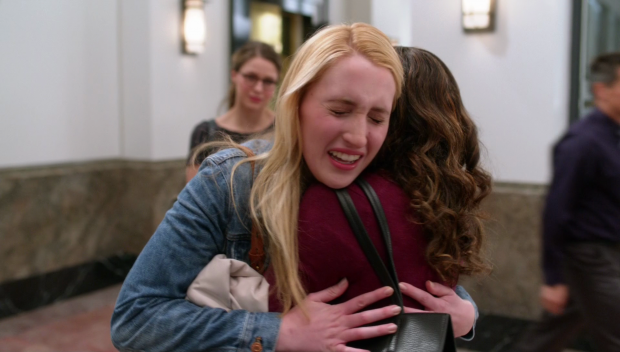 Winn had a really engaging arc in this episode. Up until now he has pretty much been the sidekick for whoever needs a sidekick. Sometimes that’s Alex, sometimes that’s Kara and lately it has been James so there hasn’t been much opportunity for Winn to step out on his own. Having him feel comfortable with his role as a sidekick and become terrified when he starts to get in the middle of things was really clever. The quick transition from adrenalin fuelled excitement at taking out a thief to terror and self doubt. It’s resolved a little too quickly when he realises he isn’t a disposable red shirt and takes care of himself on an alien planet but the idea of him dealing with this problem is strong. His outburst to James when Winn calls him out on his lack of concern for him. It’s easy to forget just how good a character Winn can be when used correctly. As a complete aside, does anyone else think Winn is wearing a Captain America T-Shirt in this episode?

A solid if flawed episode that has good parts and bad parts. Kara’s arc where she stands up for her passionate reporting style works really well and gives credibility to her dual identity by having one side inform the other in a way that hasn’t been done before now. Snapper Carr still doesn’t work but at least Kara’s development as a reporter doesn’t feel pointless at the moment. Alex and Maggie’s relationship is well handled at first but the manufactured melodrama was really unnecessary. Still, it’s good to see Alex behaving differently because of the excitement that comes with this relationship.

The alien trafficking story should have had higher stakes than it did. Being stranded powerless on another planet is a big deal since it’s the first time this show has done it but it never feels like more than an inconvenience and the episode fails to address human trafficking in anything more than a superficial way. Mon’El serving as the counter to Kara’s enthusiasm was a nice touch and Winn facing his fears while on another planet worked to a degree. It was a solid return for the show but could have been so much better.