“The Adventures of Supergirl”

Supergirl returns and she’s bringing Superman with her. Season 2 begins with the cousins super working together for the first time on this show after a change in network for the show.

I found the way that Superman was handled last season to be problematic. The way that he was seen but obscured by sunlight or the boots in the DEO was fairly laughable. The instant messaging between him and Kara was surprisingly effective but for the most part he was something they didn’t know what to do with. I can understand the reasoning as it’s important to have Kara blaze her own trail but introducing him was going to need to happen at some point. 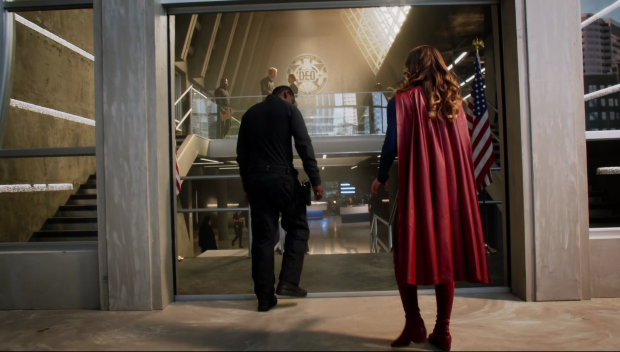 So here we are in season 2 on a new network and we have a new Clark Kent/Superman (Tyler Hoechlin). Bringing such an iconic character to life and have him stand out from all the other versions we’ve seen is no easy task but Hoechlin makes it look effortless. His Clark Kent is bumbling yet charming and his Superman is confident, caring and brimming with optimism. It’s almost as if this version is a deliberate counter to the Henry Cavill version that many continue to have trouble with.

Hoechlin’s Superman is more of a throwback to the Christopher Reeve version without imitating him and it’s the right move as far as I’m concerned. I’ve always preferred a Superman who serves as a true inspiration for those around him so seeing him stop to say hello to those he has saved or deliver a friendly wink is completely spot on. Tyler Hoechlin delivers these moments with complete sincerity.

With Superman being absent for such a long time it was a possibility that introducing him would feel awkward but between the script and Hoechlin’s effortless performance the character slots into the world created by this show with ease. His introduction was a perfect way to show the two sides of the character from his goofy Clark Kent conversation with Perry White -complete with the phrase “lickety split”- to becoming Superman. The transition in his character is astonishing and we as viewers get a good idea of how he carries himself in both aspects very quickly. 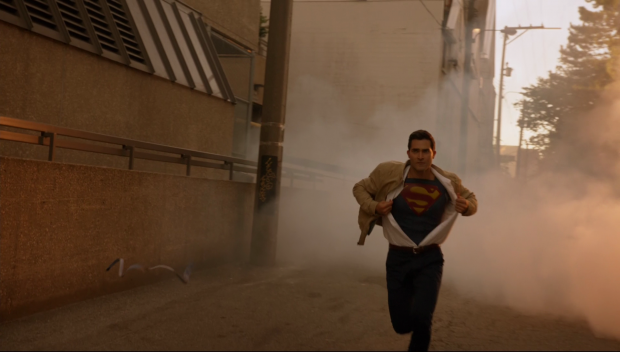 His relationship with Kara is already close so there is no work to be done there in establishing how their interactions should work. Kara says “hey cous” when he shows up to assist her and they don’t miss a beat from there. There is no rift between them but we still get the sense that they have their own way of doing things. Interestingly Clark completely takes a back seat and lets Kara do her thing. One of the things he promised to do last season was to let her figure out things on her own and we see him do that here. He offers some pointers along the way but he never flat out tells her what to do. Kara is more than willing to take his help anyway but Clark only tends to offer it when he is asked.

Beyond that the dynamic between them is a lot of fun. Tyler Hoechlin and Melissa Benoist have really natural chemistry. They really feel like family and the scenes they share are a joy to watch. Clark’s bumbling persona is entirely different from the way Kara conducts herself in her civilian life so the two characters feel distinct while still having the similarities that people would expect from two superheroes with “Super” at the start of their name. I also like that Kara sort of treats him like her little cousin since that’s what he is from her perspective. The line about changing his diapers was especially hilarious.

Both Clark and Superman have pre-existing relationships with Cat, James and J’Onn. Cat goes giddy over Clark’s good looks and Midwestern charm. It’s amusing to see Cat thrown so completely out of character around Clark Kent. This was clearly a reference to Lois and Clark: The New Adventures of Superman where Cat Grant was attracted to Clark in that show. 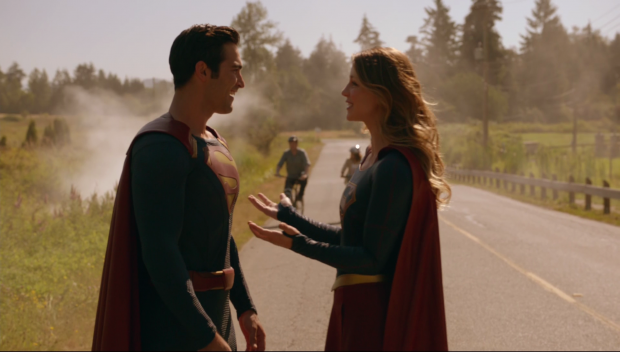 Clark’s friendship with James comes across as natural and well established. Their handshake and general interactions show that they are old friends and it never feels stilted.

I found Superman’s relationship with J’Onn to be fascinating as well. There is a rift between them because J’Onn keeps Kryptonite at the DEO and Superman disapproves because he doesn’t trust the government not to decide to use it on him. He flatly states that as long as the DEO keeps Kryptonite then he will have nothing to do with them. The best thing about it is that J’Onn’s position on the issue makes sense too. There are other Kryptonians and they aren’t as accommodating as Clark or Kara so having a defence against them makes sense. It’s hard to disagree with either of them and that’s the way it should be when heroic characters disagree on something.

It was a smart choice to not have a character arc for Superman to follow. As we meet him his life seems pretty stable. He works for the Daily Planet, is in a relationship with Lois Lane and Lex Luthor is in prison so there isn’t an awful lot to challenge him. This leaves him as an example of where Kara needs to get to in her personal life as he has managed to find a balance between his personal life and his superhero life. 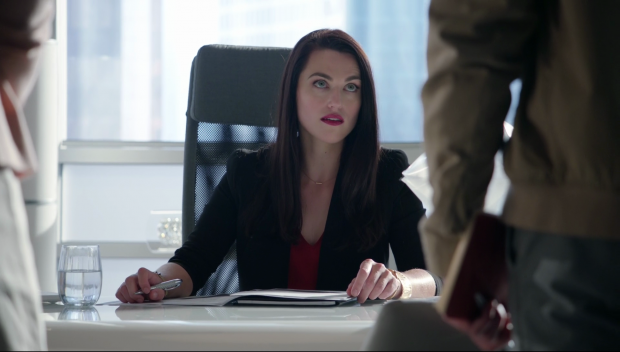 This episode establishes the theme of the season as Kara finding out how to balance her life as Supergirl with her life as Kara Danvers and this episode shows that there is an imbalance that she needs to resolve. Kara is struggling with what direction to take her life as she is struggling with having her choice of career along with the relationship with James that she has wanted since she met him being within her grasp. She has to decide to get out of her comfort zone and that’s a tough decision to make. Her struggle in this episode is relatable and Melissa Benoist plays the uncertainty perfectly. Having her back-pedal on her relationship with James was irritating but I guess it wouldn’t be a CW show without needlessly drawn out love stories.

Interestingly Cat and Clark are giving Kara exactly the same advice about how to handle the choices she has to make. Clark tells her to listen to her heart when it comes to James and the right answer will present itself. Cat advises her to do the same when it comes to choosing a job. It’s good to see that Kara’s relationship with Cat has been preserved while being tied into her inevitable exit through the hints that Cat needs to take the advice she is giving. Having her feel uncertain about her life might feel like a tidy way to get rid of her but it does fit into the theme of self definition.

Kara’s decision to be a reporter could be seen as adding yet another similarity to Clark Kent when the show should be trying to move away from but it is entirely justified in the way it is presented. She wants to be a reporter as it will allow her to help people, get to the truth of things and share that truth with the world. Not to mention that it will provide a better cover for her being Supergirl and allow her to take herself out of her comfort zone. This is the first step in her journey to stabilising her life and it’s a good start. I’m sure there will be plenty of challenges along the way but this definitely works for Kara and it’s a good foundation to build on. 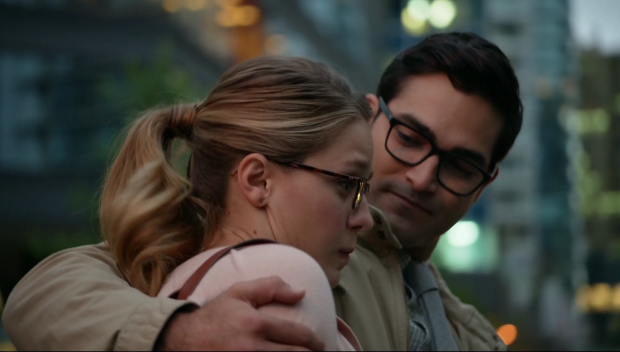 The show has some other changes such as a new headquarters for the DEO. It looks a lot better than the old one and having it in the city thematically fits with Kara’s desire to balance the two aspects of her life. Now everything she needs is within the city limits so it will be connected no matter what she tries to do.

Winn is now working for the DEO which is a much better fit for him. It was clear last season that he was wasted as a character at CatCo and worked so much better when he was running support for Kara as Supergirl. Now he gets to do this as his job and his talents as well as his intelligence are much better suited to this. It’s a good move for him and will keep him as the comic relief support in a way that makes more sense.

Maxwell Lord has been replaced with Lena Luthor (Katie McGrath) and the episode does a good job of subverting the expectations that come with her name. Even Clark Kent misjudged her because he name is Luthor but all she wants to do is prove that she isn’t her brother and wants to retool his resources to help people. Whether she is hiding her darkness remains to be seen but I hope she isn’t as it’s more interesting to have a Luthor around that isn’t a villain. I also like that Clark doesn’t hesitate in admitting that he was wrong about her. I think redeeming the family name is a much better arc for her than being a secret villain so hopefully she isn’t hiding anything. 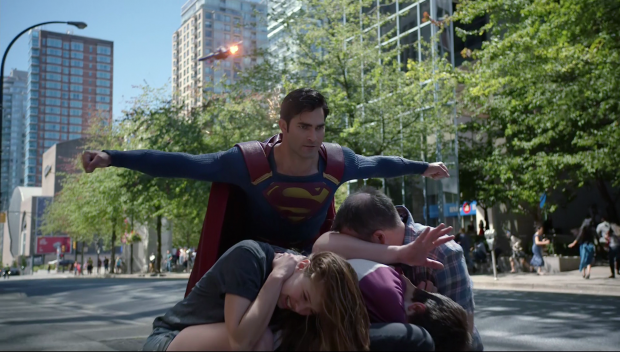 Alex doesn’t get much screen time in this episode but she seems more -for want of a better world- human than she did last season. She has some key scenes with J’Onn where she challenges him in different ways and the writers now seem much more concerned with playing up the sisterly connection between her and Kara. It’s a refreshing change and it works for Alex who already seems like a much more interesting character.

The villain of the piece is John Corben (Frederick Schmidt) and he’s very much a means to an end in this episode. He exists to offer a decent challenge to Clark and Kara without having too much characterisation on his own. We know he’s a bad guy and highly skilled but that’s about it. The episode does end with him becoming Metallo which works as a payoff for Superman’s concerns about Kryptonite earlier in the episode. It remains to be seen if that will make him any more compelling but as a threat it should be good enough. This also brings in Cadmus as the villain behind the curtain for the season.

Many were concerned that moving to the CW would make the action scenes suffer but this episode proves that it won’t be a problem. The action sequences looked slick and were well put together. I liked the way that Clark and Kara compliment each other by trusting the other to get the job done. Clearly the effects team have learned a lot working on Arrow and The Flash so are able to create dynamic action on this show too. The crash of the Venture was particularly dazzling. 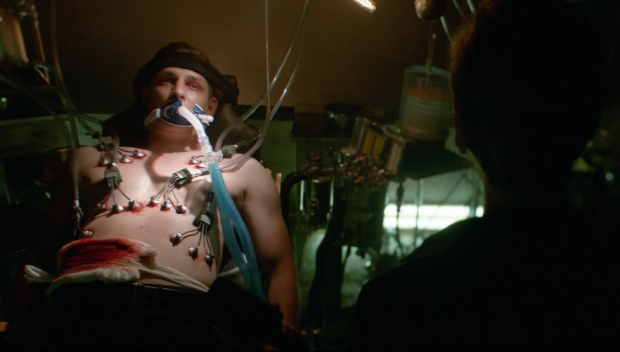 An excellent start to the season that manages to introduce Superman to the show in a way that doesn’t overpower it. Tyler Hoechlin steps effortlessly into the role and the character slots into the show perfectly. The theme of self identification comes through clearly as Kara struggles with her next move. Lena Luthor’s introduction nicely subverts the expectation that comes with her name but it remains to be seen if she will actually become a villain. The only real flaw is the halting of the Kara and James relationship. It could get tedious very quickly.