Supergirl develops the Cadmus story as James struggles with his new role as a vigilante when he is accused of murder.

Cadmus has been hanging over the show since last season with the promise of Dean Cain’s Jeremiah Danvers still being alive. They have been behind a lot of the villains this season but have mostly remained in the background up until this point. Since we are 7 episodes into the season it’s definitely a good time to start establishing them as a proper threat and introduce an endgame. 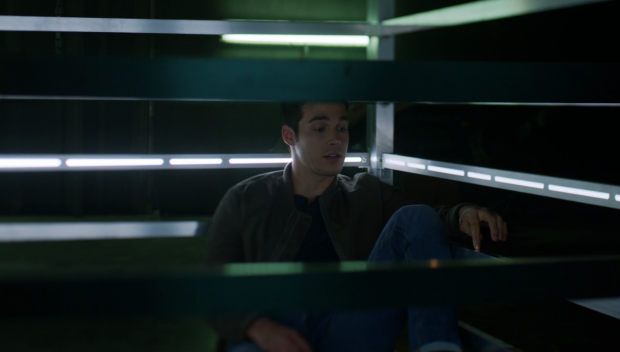 This episode does this to varying degrees of success. The reveal that the mysterious head of Cadmus is Lena’s mother was a good move as it grounds this story with the characters on this show by giving Lena a personal connection to her as well as the organisation. This episode gives us a name for Lena’s mother, Lillian-the Smallville fan in me is very pleased with this- but we get no real sense of who she is as a person and Brenda Strong’s performance is still very over the top so it’s hard to believe she’s anything more than a moustache twirling villain. Maybe Cadmus are a means to an end with the Kryptonian project Medusa due to emerge as the main threat of the season. At least Kara now knows that Lilian is Lena’s mother so there’s plenty to work with here as long as the character is allowed to be given some depth.

Cadmus is an interesting place so far. Their plan to use Mon’El to blackmail Kara into using her solar flare ability introduced in “Red Faced” to make her vulnerable shows that they know their enemy very well. They have researched what can cause the loss of her powers and know that her compassionate nature can be used to their advantage. Mon’El is a means to an end for them as they have no actual use for him. It’s a good plan as it makes sense for Kara to disadvantage herself to save a life as well so it does work from a character point of view. The simple objective of getting her blood to access the Fortress of Solitude was a decent pay-off as well.

Kara’s visit to Cadmus puts her in conflict with the real Hank Henshaw who has been turned into a cyborg. The real Hank is very different to the fake one we know as J’Onn which gives David Harewood the chance to play an angry character fuelled by hatred. It’s a really good performance that comes across as dangerous and intimidating. I’m not sure why he identifies as the Cyborg Superman as he doesn’t seem to share his powers and Hank Henshaw has been established as someone who hates all aliens, especially Superman so identifying himself that way makes no real sense other than referencing the comics.

I have a similar issue with Mon’El who should be called Lar Gand. My expectation is that there will be some reason for him hiding his true identity but that seems less likely as the season goes on. 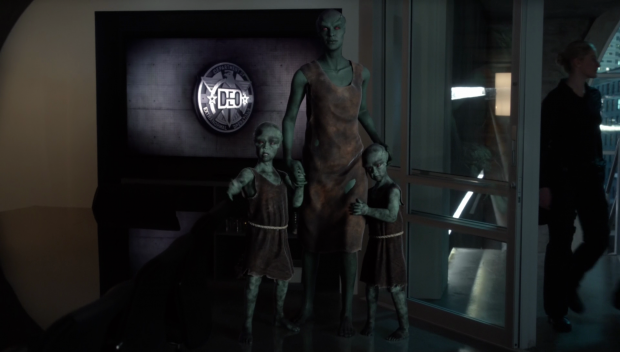 J’Onn is haunted by his family

Despite David Harewood’s engaging performance there isn’t much to Hank so far as he seems very one note as villains go. I imagine he will come back but whether there is more to him remains to be seen. I hope so because I like the idea of the original Hank Henshaw being a problem for Kara and the rest of the characters.

Jeremiah Danvers appearing to free Kara and Mon’El was actually a well done surprise as there was no indication that he would show up in this episode. As reveals go it was really understated which made it even more effective. The flip side is that his appearance is a really small one and the episode rushes to get through the necessary emotional beats as quickly as it can. Kara’s surprise at seeing him along with the father/daughter bond goes by too quickly to make any real impact which is a shame as it should have been one of the emotional pillars of the episode. This might have been enhanced if the story Kara told to J’Onn was about Jeremiah instead of Eliza. Still there are plenty of chances for him to return so hopefully we will see more of this.

The whole rescue sequence was very suspicious to me. I can’t decide if it was poorly executed or if it is all part of Cadmus’ plan. Since they created two Metallos back in “Last Children of Krypton” I wouldn’t be surprised if Jeremiah has been brainwashed in some way and is a second Cyborg Superman. Who wouldn’t jump at the chance to see Dean Cain wear the Superman suit once again.

J’Onn finds out that M’Gann is actually a White Martian and he reacts about as well as you might expect. M’Gann clearly doesn’t share the genocidal tendencies of the rest of her race and wants to be as far removed from that as possible. J’Onn isn’t prepared to see that at this point and lashes out with at her in a very violent way. All he sees is a member of the race that killed his wife and children as well as the rest of his people so that isn’t something that is easily forgiven. I like that this isn’t resolved in this episode as it’s more compelling for J’Onn to come to this realisation gradually. Interestingly he behaves a lot like the real Hank Henshaw in this episode but his position can be understood. 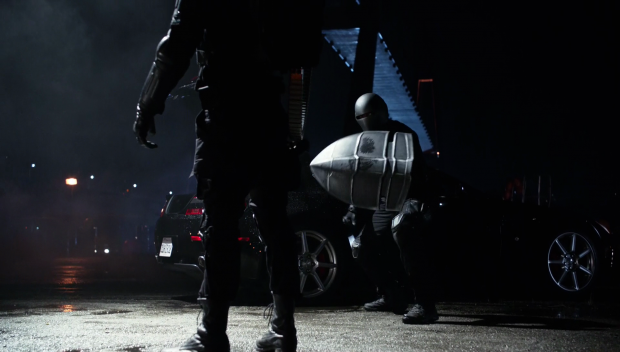 Alex is still struggling with her feelings for Maggie and has taken to internalising this as much as she can. This translates to her being distant and awkward around her before confronting her directly about the way Maggie’s rejection made her feel. It’s a really harsh conversation and it comes from a place of pain for Alex but it’s a perfectly natural reaction that makes this whole narrative feel more human as a result. Maggie clearly thought she was doing the right thing and didn’t anticipate that Alex would be so hurt so it’s easy to see both sides of this. This does come across well despite some really terrible dialogue that distances the performances from the emotion of the situation. I found that the characters were stating their feelings rather than showing their feelings which is never a good way to go. It might work if the dialogue was clever but it was very surface level and this probably made it difficult for the actors to really engage with the material.

As with J’Onn’s reaction to M’Gann this isn’t something that is so easily resolved. It’s obvious where it will eventually head but the fact that the show is taking its time to get there is really refreshing considering the tendency to rush other things. Maggie and Alex are going to try being friends for now and I suspect that it will evolve from there. Care is being taken to do this right and that’s the important thing.

This was a very busy episode with Cadmus, Hank Henshaw, J’Onn and M’Gann, Alex and Maggie and Jeremiah Danvers to deal with so there really wasn’t any room for James and his vigilante crusade as Guardian. I’ve mentioned that this story has no place being in this show at this point because nothing has been done to make this role make sense for James.

His particular plot involves a rivalry with a murderous vigilante who uses lethal force. Naturally the public assume Guardian is responsible and James finds himself in over his head. This story doesn’t work for a variety of reasons but one of the major ones is that there’s nothing new here. Vigilantes arguing over their moral code is one of the most played out things in superhero stories and this one brings nothing new or interesting to the table. There isn’t enough time to bring any level of depth to it so it simply comes across as a cookie cutter story choice. 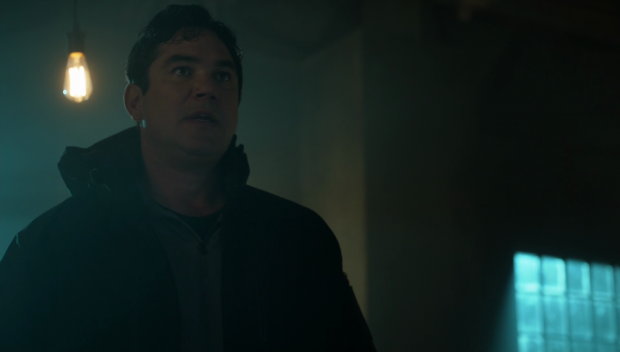 The return of Jeremiah Danvers

The whole framed for murder plot is also really played out in superhero stories and this episode doesn’t do very much with it. I did like that Alex saw through Winn’s transparent desire to give Guardian the benefit of the doubt though Alex’s decision to not reveal that identity to anyone doesn’t really work for me. I feel that she really shouldn’t approve of this and do something to put a stop to it.

I don’t think I’ll ever invest in James as Guardian because the show gives me no reason to. His motivation seems to be around honouring his father but it doesn’t work because it has never been part of his character before. The more this continues the more frustrating it gets because there are better uses for James in the show.

He also doesn’t feel like superhero material and the scenes where he was trying to secretly justify himself to Kara were painful to watch though it does give us a Batman reference which redeems it slightly. In theory flipping it around so that Kara doesn’t know the secret when the audience does is a good idea but the execution is way off. This whole plot looks like it’s here to stay though and if it starts to work then I’ll eat my words but from now it’s a huge mistake.

A vigilante gunning down people who escaped being convicted on a technicality could have been great with some attention given to it. This good version of the story would probably have Kara having a conversation about justice and how his way isn’t the right way. It might play out better than I’ve described it but it should have been an affirmation of Kara’s morality rather than a trivial matter for James to deal with. 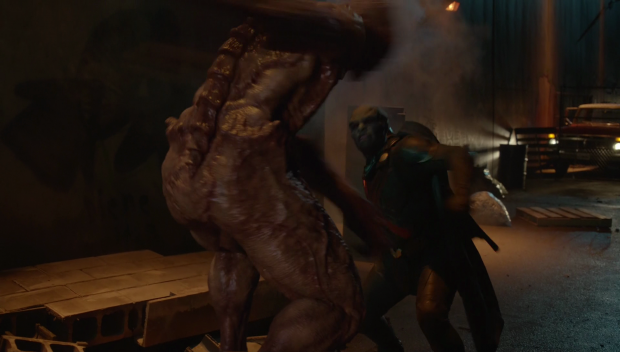 J’Onn learns the truth about M’Gann

As an overall experience this episode doesn’t work as well as it could because the compelling parts of the story are dragged down by the less compelling parts. The Cadmus story is all well and good and the Cyborg Superman had a lot of potential but there isn’t enough time to let any of this develop. Alex and Maggie’s contribution to the story has to be applauded because the development is gradual enough to feel like it has weight but the dialogue in this particular episode was really on the nose which affected the performances a little.

J’Onn learning that M’Gann is a White Martian is really strong and works because it isn’t yet resolved. J’Onn’s pain and hate won’t go away overnight even though M’Gann clearly doesn’t want any part of it. It’s a great conflict and played very well by David Harewood. James really isn’t working as a vigilante and this episode putting him against a vigilante who has different motivation to him doesn’t help matters. It’s very played out and doesn’t do anything remotely new or interesting with it. This arc doesn’t work for James and just gets worse as it goes on.