Supergirl continues to deal with Kara’s grief following the loss of Mon’El as a psychic villain forces her to relive her worst fears.

I was very critical of last week’s episode because of excessive angst. My main concern was the possibility that this could dominate the season and turn the show into something that’s no fun to watch any more. 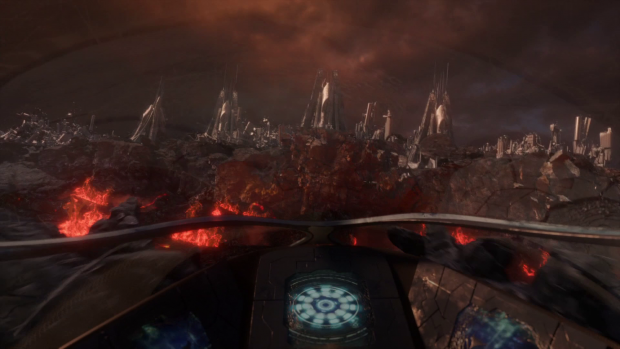 Reliving the worst day of your life

Thankfully this episode takes a far more realistic approach to coping with loss. It is still angsty and a little melodramatic but that seems to be a staple of CW shows that just won’t go away. I don’t expect characters to be happy all the time but constantly acting like the world is ending gets really old after a while.

Kara’s approach this episode is throwing herself into both sides of her life to the point where she is overdoing it. The balance she once had between Kara and Supergirl appears to be gone as she is constantly running back and forth from one identity to another. This behaviour lessens her effectiveness across the board which obviously means that she isn’t coping as well as she thinks she is. This episode could be seen as Kara being in denial about how she is feeling and overcompensating for that.

Her arc for the episode is reaching a point of acceptance and starting to move forward. The appearance of psychically powered villain Psi (Yael Grobglas) is an enabler for that as she forces Kara to confront her fears. As villains go she is badly underdeveloped even by Supergirl standards though Yael Grobglasis an engaging presence with a lot of charisma which goes some of the way towards making up for the lack of development. 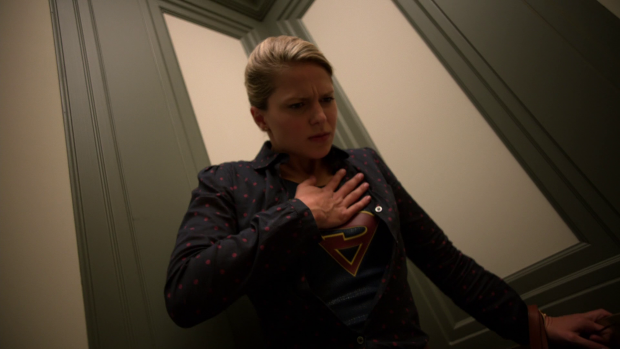 The important thing about Psi is the effect she has on Kara. She can’t be a physical threat but she is a very powerful mental one. Kara relives her escape from Krypton and the memory is depicted in first person. It’s a really effective way to do this as it gives the audience insight into Kara’s perspective on the destruction. The constant sound of the breathing shows her becoming more scared as the planet breaks apart around her. It allows us to appreciate how much of a harrowing situation it was for her. It also clearly explains why Kara would experience intense claustrophobia as she was trapped in the ship that helped her escape Krypton. Effectively she spent years trapped in that pod even though according to her perception it was hardly any time at all. It also mirrors how she feels now as it was the last time she felt lost and alone so the emotion is both relevant and visceral.

Any scene where Kara was overwhelmed by feelings of claustrophobia was really well acted by Melissa Benoist. The scene in the elevator was particularly noteworthy as it perfectly conveyed how terrified Kara was of her situation. The fact that she was in the midst of changing costumes made it even more impactful as it was a reminder of how powerful she is while appearing so powerless.

What didn’t stack up is the explanation behind her bouts of anxiety. She apparently believes that Mon’El is dead and that she is responsible for it. If he were alive then thinks he would be in contact and since he hasn’t then he must be dead. Part of this is due to Kara’s enhanced feelings of terror but the root of that is genuine emotion so on some level she believes that. It feels like it comes from nowhere and doesn’t really work as a justification. Similarly Alex’s pep talk where all she says is “I’m sure Mon’El isn’t dead” lacks the necessary heft to help Kara face her fears. 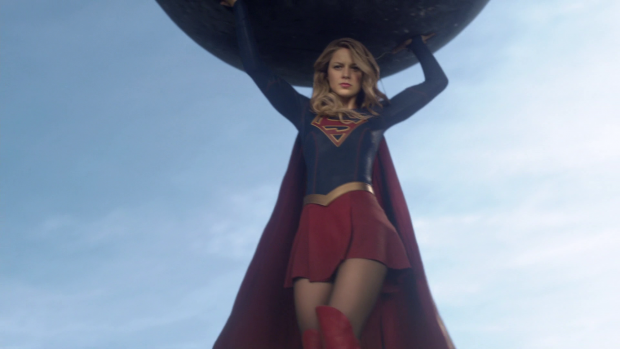 Kara’s arc feels somewhat repetitive when compared to the previous episode. In both cases she is distraught over the loss of Mon’El, pushing her friends and family away and experiencing little joy in life. This episode handles it better because Kara is more nuanced in her approach. Keeping herself busy and having meaningfully mundane interactions with other people when he heart isn’t quite in it works so much better and shows that there is some progression in Kara’s emotional state rather than being constantly angsty.

Alex and Maggie hit another snag in their wedding plans when Alex mentions that they will someday have kids. Naturally Maggie never considered that and it becomes clear that this is yet another thing that they didn’t really bother to talk about. It almost feels like a trope for them at this point. In almost every episode Alex and Maggie have a relationship issue based on a conversation topic that had never come up prior to that point. It makes it feel as if they are entering into a marriage for the wrong reasons without knowing enough about each other to make an informed decision. It looks like the desire to have kids will be a sticking point that pushes them apart considering Floriana Lima is only in a handful of episodes. It’s all fine in terms of the acting as Floriana Lima has great chemistry with Chyler Leigh but it feels like another example of manufactured conflict driven by a lack of proper communication; all too common on these shows.

Following her acquisition of CatCo, Lena has decided to take a hands on CEO approach because apparently middle management isn’t a thing in this universe. She is very optimistic about the challenge and has removed herself from her responsibilities at LCorp to focus fully on the world of journalism. This rubs James up the wrong way as he feels that she is essentially getting in the way. He reminds her that he ran the company for a year with no problems so doesn’t need her help doing so which makes me laugh since I’ve seen what James spent his time doing last season. 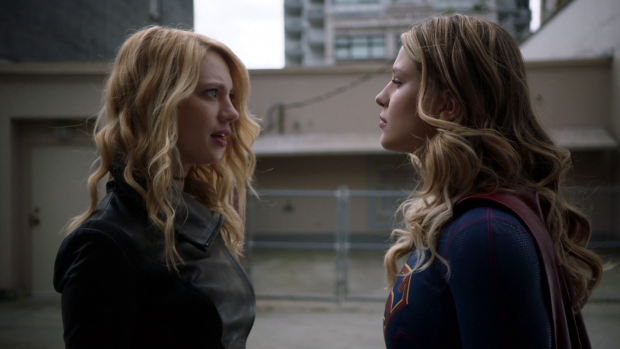 The tension between Lena and James is amusing enough to carry their scenes together and it’s good to see Lena be given a different sort of challenge than constantly testing her to find out if she’s evil or not. This could be the boost that’s required to make the CatCo aspect of the story feel more relevant again. Whatever the decision is at least this story provided some entertainment.

Lena being at CatCo allowed an opportunity for her to interact with Kara on a different level. She asks Kara to do things and gets brushed off in favour of her sneaking off to become Supergirl. At first she’s sympathetic but eventually lays down the law as her boss and calls her out on her behaviour being unacceptable in the workplace. This approach was surprising but welcomed as it establishes Lena being able to distance her work life and her personal life. It’s also the wakeup call Kara needs to realise that she can’t continue to behave this way.

Samantha is further developed in this episode in a really clever way. She is dealing with her own sense of anxiety specifically related to starting a new job while worrying about raising her daughter Ruby (Emma Tremblay) who is developing social issues at school. The ordeal presented last week was a definitive experience for her as she considers the idea that her mother might actually have super powers. Samantha is positive she doesn’t and writes off her show of strength as being adrenalin. It turns out that wishing her mother would develop super powers is fuelled by her desire for her not to return to work. It’s a very childlike thing to do and works well in context. The general relationship between Samantha and Ruby feels very natural and Ruby doesn’t feel too precocious or annoying so I ca tolerate the cherubic presence on the show.

I also like how Samantha is being developed. Having some idea where the character might end up means that I have certain expectations but so far the writers seem content to move the story along slowly and let the reveals around Samantha be earned rather than written off as cheap cliffhangers. Odette Annable is excellent in the role and carries her scenes wonderfully despite being separate from the rest of the cast at first. Having her take Lena’s place at LCorp is a great excuse to have her interact with the other characters and be a bigger part of the overall story. 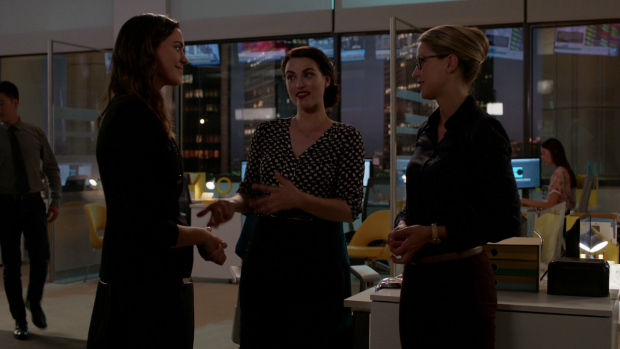 A room full of future enemies?

A vast improvement on the previous episode. Even though Kara’s arc is almost identical in both episodes this outing handles it a lot better and makes her struggle feel far more realistic. The appearance of a fear inducing villain is the perfect way to have her face them. Seeing her escape from Krypton from a first person perspective was a really nice touch and mirrors her current emotional state perfectly while also providing an explanation for the claustrophobia she experiences. Her revelatory moment that lets her get over her fear is somewhat weak but it works well prior to that.

Alex and Maggie hitting another snag in their wedding plans because of a lack of communication is something I could have done without. I did like seeing Lena and James at odds with one another at CatCo and I feel confident that this part of the story could become relevant once again. Adding Samantha into this by placing her at the top of LCorp is a great way to connect her to the rest of the cast and I like the way her relationship with her daughter is developed.