The President of the United States comes to Supergirl to pass a law that will allow aliens to live freely among humans.

It has been mentioned before but it’s worth noting that the President in Supergirl is a woman which ties perfectly into the feminist and female empowerment themes that run through this show. Kara is a powerful woman in terms of her abilities and her moral standing and President Olivia Marsdin is powerful because of her political role. 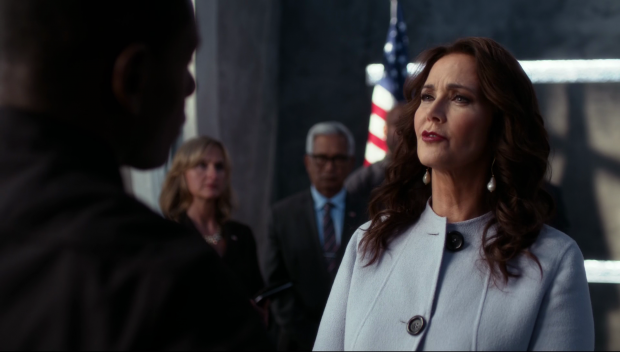 The President visits the DEO

The actress playing the President will be familiar to fans of the genre. She is played by former TV Wonder Woman Lynda Carter and the episode has a lot of fun with this idea. Kara idolises her as if she is legendary. This makes sense on both a narrative and a meta level as women in America would look up to a female President as a symbol of what they can be. On a meta level we have Kara -and by extension Melissa Benoist- geeking out because a DC acting legend is in the show.

There are a few winks to the Wonder Woman TV show such as Kara spinning around on the spot to put out the flames on her costume and Lynda Carter’s “You should see my other jet” line. The line is doubly funny because her other jet literally can’t be seen. This is the right amount of referencing and doesn’t overpower the episode.

President Marsdin is in the show for a specific reason. She wants to pass a law allowing for aliens to make themselves known to the public and live among humans. This is a huge deal as it marks a notable step forward for the human race. Aliens are a part of life in this world and I like that they are being acknowledged beyond being fodder for villains of the week. I found the reveal that President Marsdin is an alien to be a nice touch if a little obvious in hindsight but it helps strengthen her empathy for the cause. The next question is whether she has always been an alien or is impersonating the real President Marsdin.

The idea of the new law does come with its problems as historically humanity hasn’t been all that accepting of things that are different so it won’t go as smoothly as intended. History has shown that humanity has a hard enough time getting along with their own species let alone visitors from another planet who may look completely different. 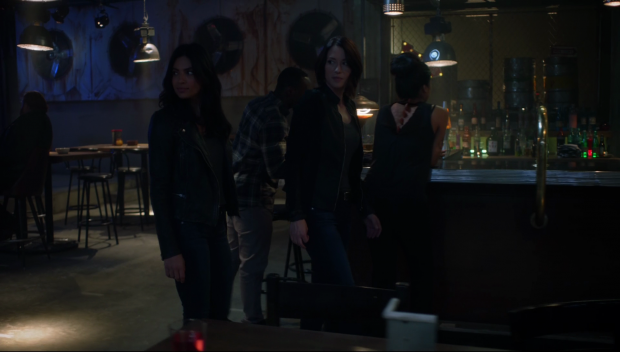 This is where the episode excels as it approaches the issue in a really mature way by offering different perspectives on it. Kara is all for it because she is an alien and a very accepting person so the idea of aliens no longer having to hide their true selves is a fairly open and shut case as far as she’s concerned and she can’t wait for the law to pass.

Interestingly Kara can’t take the moral high ground in this situation as this episode shows that she has a blindspot for prejudices of her own. This manifests with Mon-El (Chris Wood) who was introduced back in the season premier but hasn’t really done anything up to this point so there was little point mentioning him. It turns out he’s a Daxamite from Krypton’s sister planet in the same system, Daxam and there is a long standing bitter rivalry between the two worlds. This rivalry causes Kara to jump to conclusions about him and behave in really judgemental ways around him. Mon’El has his opinions on Kryptonians confirmed through her actions and she refuses to see him in any other light.

In effect Kara is a microcosm of the human race as she is dealing with prejudice that has been built into her from birth and can’t see past them at first despite all of the comments she makes about inclusion and tolerance. Average people will be facing the same problems as tolerating aliens might be difficult for them to do, at least right away. Kara assumes the worst about Mon’El just as humanity will about other aliens.

By the end of the episode Kara realises that her opinions contradict her behaviour and takes steps to correct that by giving Mon’El the benefit of the doubt and releasing him. How this will progress is anyone’s guess at this point but I see it going in a few directions. 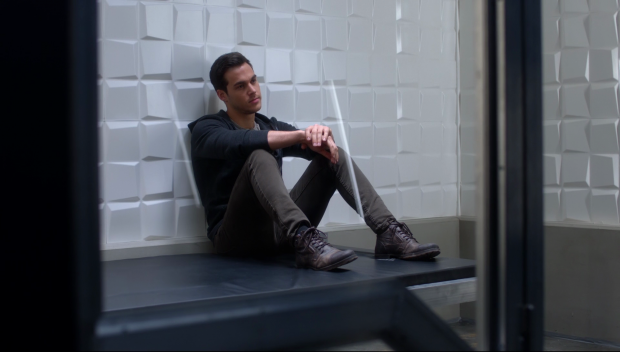 One of which is that she has her suspicions about Daxamites confirmed through what Mon’El does, another is that she might realise that not all Daxamites are trouble but this one is or she might simply find that Kryptonians were wrong about them all along. So far it’s all up in the air as Mon’El is so far largely undeveloped. That’s fine for this episode as he is a representation of prejudice that needs to be overcome. I am pretty sure that he is lying about his real name though.

Other characters have opinions on this issue as well and I found J’Onn’s to be most interesting. He has seen how humans can be from two main perspectives as highlighted in this episode. The first is as an alien refugee who has been met with fear and aggression. Secondly he has seen the world through the eyes of a black man for many years and humanity doesn’t always look so great through those eyes. There are a few examples of racism brought up in this episode and J’Onn ties into all of that as he has had trouble finding a place. On paper the law looks good but he knows it’s not as easy as Kara and the President would like it to be.

Also factoring into this issue is new character Maggie Sawyer (Floriana Lima); a National City Police Department cop who identifies with aliens because she understands what it’s like to feel like an outsider. She mentions that she is a non white lesbian who grew up in Nebraska so knows a thing or two about intolerance and prejudice. The dialogue around this is in no way subtle but I suppose it doesn’t have to be. It just comes across as a little on the nose when Maggie outlines her motivations as dictated by her backstory in detail.

Despite that, Maggie is a welcome addition to the show and makes an impression right away. It’s rare to see characters written as being a match for Alex and she definitely qualifies. There is good chemistry between them that definitely has a flirtatious edge. Whether that turns into something or simply becomes a part of their dynamic that never goes anywhere remains to be seen but for now it’s good to have a character that helps Alex have some personality as she so often lacks that. 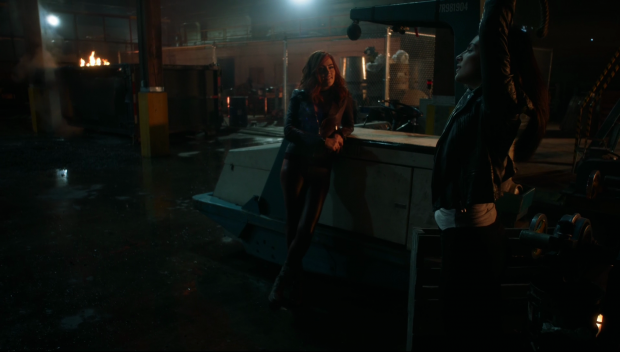 Lena Luthor makes her return and the writers are playing their cards really close to the chest when it comes to her motivations. She still talks about devoting the resources of her company to doing good and definitely has a good rapport with Kara who seems to trust her but it feels like there is more to it. The idea of the alien detection device plays into something more sinister as it fuels people’s paranoia and would allow the public to engage in witch hunts if they so choose.

There is a general mention of aliens being registered which is a really concerning path for society to go down and it seems that Supergirl is borrowing heavily from Marvel’s X-Men and Civil War. This isn’t necessarily a problem but it all depends on how this idea is approached and whether it is developed in any meaningful way. It would be a good excuse for aliens to feel more uneasy about their role in this world and some interesting tension could result from that. If it came down to it then what side does Kara choose?

I really liked the background flourishes in this episode such as the alien dive bar. It really helps bring aliens out of being stuck as villains of the week and starts to develop a whole culture around refugees hiding on Earth. They have a place they can go that feels safe and where they can be themselves. For the most part they don’t want to harm anyone and just go about their daily lives looking for acceptance. In many ways it reminded me of something you’d see in Buffy the Vampire Slayer or Angel as both shows featured similar locations that demons could call their own. This helps give the show depth and scope and shows that aliens are a big part of this world.

Having this bar provides a perfect opportunity to introduce M’gann M’orzz a.k.a Miss Martian (Sharon Leal) who appears at the end of the episode hiding out as the alien bar’s bartender. I really liked her introduction as it was a good character moment for J’Onn who gets to revert to his natural form and relax among those who will accept him without any problems. Having him realise that there’s another member of his race out there is a massive deal and David Harewood plays the reaction brilliantly. This may undercut some of the tragedy of his character but I have a feeling it will make him more interesting. 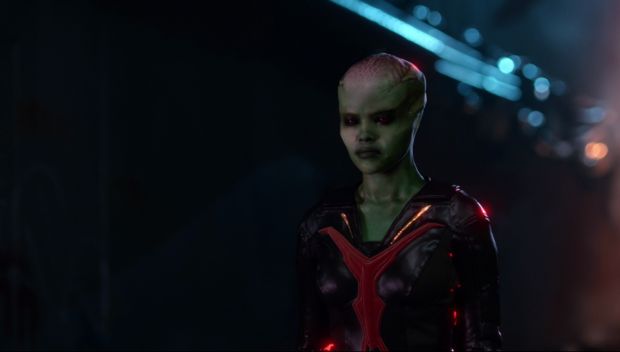 There are a couple of areas where this episode falls down outside of some clunky dialogue. The CatCo scenes just don’t work without Cat Grant in there. James makes no sense as the boss and no attempt to make him behave like he is will make it convincing enough. Snapper Carr is good enough because of Ian Gomez’ performance but it doesn’t make the scenes any more worthwhile. Since CatCo is a media outlet there could be an opportunity to use that as a way to focus the issue which is somewhat attempted through Carr’s advice to Kara about not letting her passion bias her reporting. It’s good advice but feels out of place here.

Another thing that doesn’t work is the villain, Scorcher (Nadine Crocker). Her motivations made absolutely no sense. How does worrying about the Government cracking down on aliens translate to attacking the president and kidnapping Maggie? Surely that’s not going to lessen any fears that people might have. She could have provided valuable insight into xenophobia and hysteria caused by powered aliens being among humans but the really confusing usage ruins that.

A really interesting episode that brings the issue of aliens being among humans to the fore rather than leaving them as fodder for villains of the week. It’s explored in interesting ways with different perspectives being given by different characters. Kara seeing that she is prejudiced towards Mon’El and not noticing it while bragging about tolerance is a nice touch as it makes her less than perfect. Maggie Sawyer is a good character so far and the introduction of Miss Martian is interesting. Some clunky dialogue lets the episode down as well as the CatCo scenes feeling redundant along with a villain with confusing motivation. Despite that it’s a thematically rich episode that raises some interesting issues.