“Back and to the Future”

Supernatural begins its final season picking up where the last one left off with the odds stacked against Sam, Dean and Castiel.

Part of me never thought I’d see the day that I’d be covering the final season of Supernatural but all things do have to end and it looks like this show is already putting its all into what should hopefully be a satisfying run before fans have to say goodbye. Supernatural has a significant legacy and plenty of stories to reference so I’m hoping the cast and crew will take the appropriate victory lap. 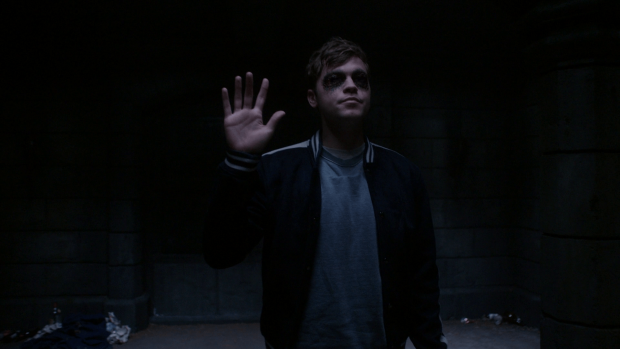 Since nobody is using it

The action picks up where the finale of last season left off with the dead rising from their graves all looking to attack Sam, Dean and Cas. It turns out that they are dealing with Ghosts who are inhabiting the nearest available viable body which makes them seem like Zombies when they technically aren’t. Either way they’re lethal and coming after the characters so it doesn’t really matter what they are at this stage.

Remarkably they manage to survive long enough to take refuge with the pursuers beating down the door to get to them. At this point they are able to take stock of the situation and try to figure out what happened. Dean questions what Chuck meant by it being the end and it doesn’t take long to realise that there aren’t a lot of options. In this show there’s always a convenient happenstance that offers some form of hope and this arrives in the form of a Demon named Belphegor who takes over Jack’s body to discuss a truce of sorts. This is where the story really starts to form and the characters are able to further react to the situation. Castiel is deeply affronted by a Demon taking over Jack’s body because he sees it as defiling the corpse of someone who was like a son to him but Dean convinces Cas that they should at least hear him out in the absence of other options. All in all it’s an overly neat and convenient resolution to a large scale situation but not at all unexpected.

Belphegor seems like a reasonable addition for the moment at least in terms of moving the story forward. He has enough of a connection to the main characters with Castiel finding it impossible to be around him due to him currently inhabiting Jack’s body and his particular affinity for Dean. He says that he’s a low level pencil pushing Demon in Hell but that’s almost certainly a fabrication to hide some other purpose that will become known in later episodes. Bringing up Dean’s reputation as a torturer in Hell is a very deliberate attempt to throw him off balance by reminding him of a time he would like to forget. Dean has dismissed it as something in his past that happened a long time ago but Belphegor points out that it depends on how someone looks at it. As part of the show’s legacy I expect it will have a part to play before the season is out. 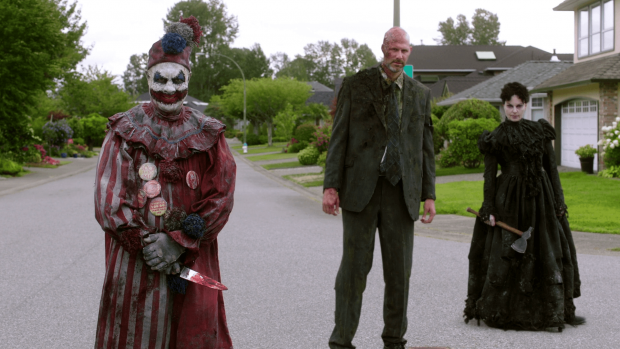 Alexander Calvert takes to his new role well. He plays Belpehgor very differently to how he played Jack which makes it easy to see them as different characters. Belphegor conducts himself with confidence and whimsy where Jack always seemed so unsure and guarded. Interestingly Sam and Dean are more easily able to accept Belphegor in Jack’s body because of how often they’ve encountered Demons in the body of those they knew.

Upon getting out of the desperate situation that opens the episode a more immediate problem of protecting a nearby town comes up. It appears that their position is the epicentre of the problem which means that it is going to spread outward which gives them some chance to protect people. Their job for this week is to contain the ghosts within a certain radius so that they can’t go any further. It may not be a permanent solution but it’s a start and the best they can hope for right now. The objective isn’t interesting in itself but the challenges surrounding it are. Plaguing the town are figures from Sam and Dean’s past which includes the same Woman in White (Shanae Tomasevich) they dispatched in the very first episode, the Bloody Mary (Jovanna Burke) they took on in season 1 and the Clown (Sean Tyson) they fought in season 2. Based on this it looks as is the final season will at least partially feature a greatest hits of the show as many of the foes they thought defeated come back. They will be uniquely annoyed at Sam and Dean as well so it could produce interesting twists on the familiar.

Facing foes that have already been defeated causes Dean to have something of an existential crisis. If all the enemies they fought and defeated can come back then arguably all their efforts have been for nothing since they started Hunting. A large part of Dean sees their lives as being futile as all the good they’ve done is so easily undone. Learning that God/Chuck has been manipulating them this whole time for his own amusement has really affected him as he doesn’t like being anyone’s pawn and equates it to being stuck in a maze. They may have been able to choose directions but they were still navigating a maze. This greatly upsets Dean as it adds to the overall futility of the situation in his eyes. 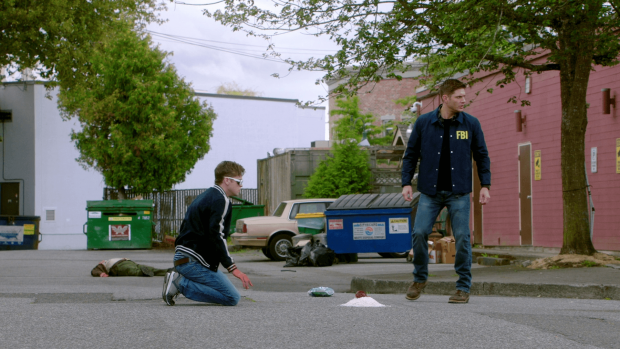 Sam doesn’t agree and points out that they’ve saved a lot of people over the years which still means a lot even if their enemies weren’t permanently dispatched. All it really means is that they have to do it all again but it doesn’t render everything they’ve done invalid as far as he’s concerned., He also sees the situation in a hopeful light as it’s likely that God has abandoned this world because he is no longer entertained by it just as he’s done on other worlds. The difference in this case is that they have a chance to save it and victory means that there’s a world free of God’s intervention where they are completely free to choose. To use Dean’s analogy it takes them out of the maze and makes the future truly theirs to shape. In Sam’s eyes that’s something worth fighting for and his pep talk is enough to bring Dean around to his way of thinking and the two forge ahead motivated to win the day.

I wonder if this is setting up the end point for the series. It’s possible that the series could end with a form of stability as Sam is alluding to here. In essence it will be a world free of world ending threats that is able to carry on. Sam and Dean would still be Hunters but it’ll be relatively simple Ghosts, Demons and other such threats out there for them to track down. It would be as back to basics as these things can get and would be a satisfying ending for me as a fan of the show to know that the characters continue doing what they do best.

Naturally the journey towards this won’t be easy as there are a number of lingering threads that need to be dealt with. One that isn’t mentioned is the deal Castiel made with The Shadow that will be cashed in at the point he’s at his happiest. Another is the fact that Sam shot God and has a wound that Cas can’t heal. It was said that using The Equaliser would result in the death of the one that fired it. The weapon was meant to be used on Jack so it remains to be seen how God is affected by the shot and what it will do to Sam over time. My prediction is that it’s something that will slowly threaten his life over a period of time before a solution is found but for now it hangs there as another problem to deal with. Dean cleaning his would allows for a great brotherly moment where they reminisce about childhood and remind us what the core of the show is.

Another problem that will arise is out universe’s version of Michael who is free to leave his cage whenever he wants now that every door in Hell is open. After dealing with another version of Michael in recent times it’s known how much of a problem that could be though it’ll be interesting to see what the differences between the two are. It also allows for the return of Adam who hasn’t been seen since Michael took him over. Basically there’s a lot to deal with this season before the show wraps up and I’m excited to see if the producers can pull off a satisfying conclusion. 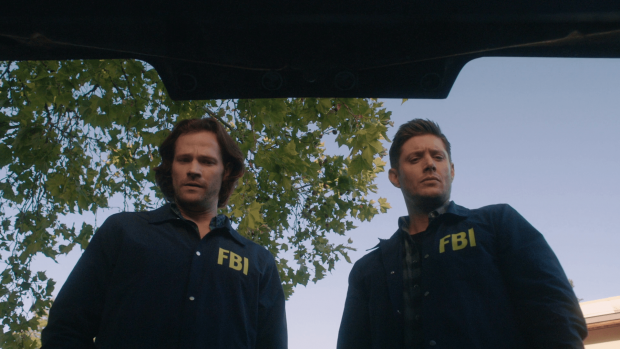 Work to be done!

A strong start to the final season that pays appropriate tribute to what has come before while setting the stage for wrapping up the show. The resolution to the dire situation that opens the episode may have been overly neat but it certainly sets things in motion and lays the groundwork for what the season may try to accomplish. Belphegor is a reasonable addition so far with enough of a connection to Castiel and Dean to make their interactions work. Castiel being consumed by grief and unable to even look at him because he inhabits Jack’s body makes for some strong moments and his mention of Dean’s time as a torturer in Hell is clearly meant to throw him off balance. He’s almost certainly lying about who he is and for now his presence is a welcome one.

The return of old foes from the first and second seasons is an appropriate way to reference the history of the show while also raising a really interesting argument. Dean feels that their successes are rendered invalid since everything they defeated will now return and doesn’t like the idea of being manipulated by God for his own amusement. Sam sees it differently as he feels that all the people they saved gave their efforts meaning whether the things they defeated are back or not and his perspective is that the world is now free of God’s influence so if they manage to win then it means they have true free will and their world is being left alone. It’s enough to motivate Dean and there are things in the background reminding the audience that the journey towards that stability won’t be an easy one. Based on this I’m keen to see how the season will shape out and if the production team can deliver a satisfying conclusion.