Supernatural teams Sam and Dean up with Donna when she calls them for help in tracking down her missing niece.

Thirteen years in and this show still finds ways to surprise its audiences. The episode initially seems like a fairly standard monster hunt as a palate cleanser after a few weeks of high stakes plot driven stories but becomes something else entirely and shows that there’s still plenty of versatility left in this show. 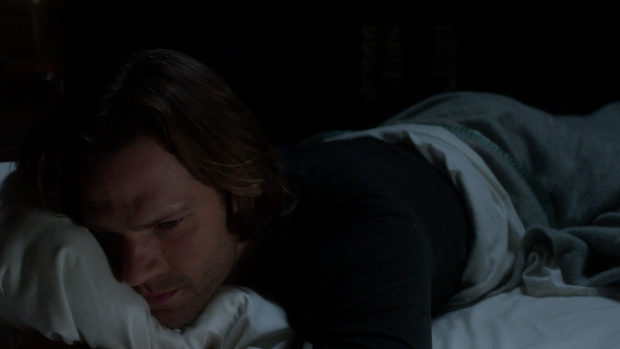 Sam does his best impression of me every morning

Bringing Donna back is always a good idea because she is such an engaging presence who blends into Sam and Dean’s dynamic well. There was plenty of her last week in the backdoor pilot to the -hopefully upcoming- Wayward Sisters spin-off but more of her is always welcome.

Donna shows a different side of her to what we are used to seeing. Just last week she was the bubbly badass comic relief but this week brings an intensity to her that hasn’t been seen before. Her interrogation of the priest shows this in spades and makes for a captivating scene that shows how intelligent, confident and competent Donna is as she is able to interpret the answers to determine that he isn’t the guilty party. He’s the most obvious choicecl which means that he’s the least likely suspect from our point of view but Donna uses her experience and smarts to figure this out completely eliminating a potential lead.

Some insight into her family life is thrown in through the one sided exploration of her relationship with her niece Wendy (Sarah Dugdale) who acts as the damsel in distress for the episode. There’s not much to say about Wendy as a character as the episode does little to flesh her out other than showing how she came to be captured. The focus is on Donna and her desire to bring her niece back safely. Repeated mention of her life being at stake coupled with anecdotes developing Donna’s relationship with her keep the momentum going strong while adding a personal connection to the case. 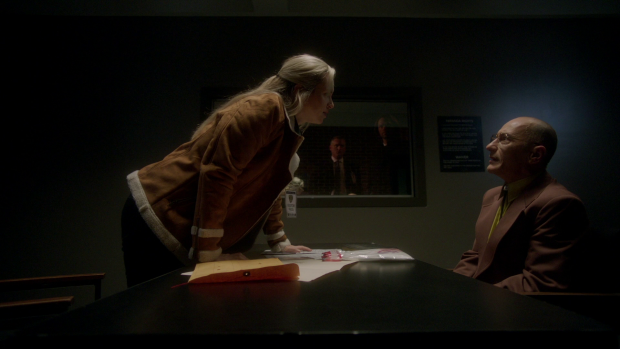 Donna turns up the intensity

Donna’s relationship with Doug (Brendan Taylor) forms a big part of the episode as well. Doug wasn’t previously aware of the existence of supernatural beings so there’s a certain level of confusion to the early parts of the case for him. Sam and Dean’s story about being related to Donna isn’t something he finds believable either so the whole situation is bizarre for him right from the start. Throughout the episode there are hints that he is doubting himself in their relationship due to feelings of inadequacy directly exploited by young Vampire Marlon (Steven Yafee) who throws him off guard before attempting to turn him. This comes shortly after learning the truth about monsters so he is generally out of sorts anyway.

Being turned into a Vampire makes his recent knowledge feel more real to him which terrifies him into telling Donna that he can’t be with her any more because the secret life he leads is too much for him. It’s a fair position for him to adopt and carries the appropriate level of tragedy to it as Donna’s secrets are what ultimately drive them apart. She did lie to him in order to protect him but this knowledge clearly isn’t something he is going to find easy to live with and confronting it every day is certainly something he doesn’t want. They part on good enough terms but there’s a palpable sense of loss there as far as Donna’s concerned. It’s the first indication to her that there are sacrifices to be made in order to live the life of a Hunter and sets her up nicely for her role in Wayward Sisters.

There are no real surprises when the one behind it turns out to be FBI Agent Terrence Clegg (Christopher William Martin). Anyone who has seen Supernatural or even TV before will be able to make an educated guess about who the guilty party is. This isn’t a bad thing but it is certainly predictable though the good thing about it is that there’s plenty of time to build up the character throughout the episode and give him an easily defined relationship with Sam and Dean. It’s not a strong or memorable one but it’s better than introducing the villain in the final minutes when the reveal doesn’t really mean anything. It’s also amusing to see Sam and Dean deal with a real FBI Agent putting their own cover at risk. 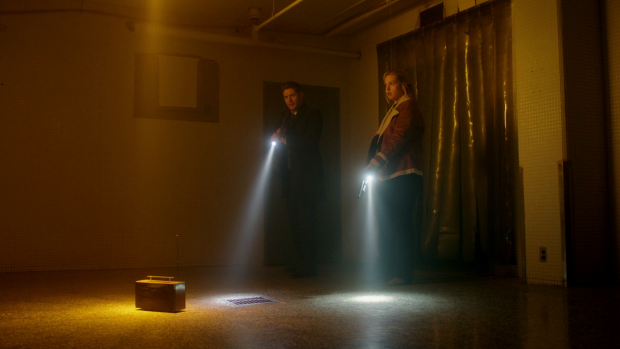 Clegg’s plan is the interesting part. After stumbling onto the existence of supernatural beings he thought it would be a good idea to pick off people who wouldn’t be missed by anyone and sell their body parts at auction to creatures of the night that prefer to remain hidden. It’s a great idea because it once again expands the scope of the series as a whole and addresses the issue of what monsters do when they aren’t causing problems bad enough to base an episode on. The point is made about the population being too large to not have most of them trying to remain hidden and how the sustain themselves is immediately answered to some degree. The auction idea is brilliantly gruesome and makes real sense as a business opportunity in a twisted sort of way.

In theory there should be consequences to this as Sam and Dean have now cut off a lucrative business that was keeping monsters fed. Will there suddenly be an increase in murderous activity and are there other such businesses out there using this to make money? In theory there could be an entire black market out there somewhere specialising in keeping monsters who want to fly under the radar fed. I’m thinking a Supernatural twist on the Troll Market seen in Hellboy 2. 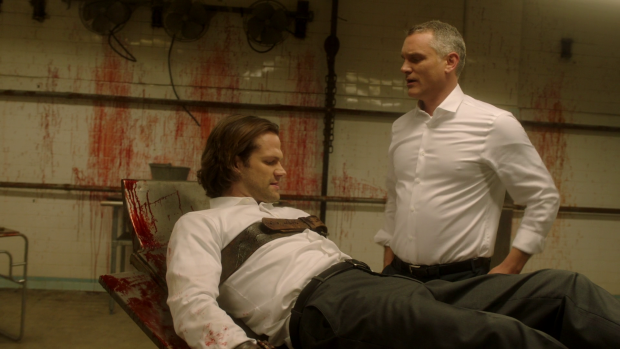 I also like how the reputation of the Winchesters was used in this episode. Clegg knows who they are because he knows enough about the supernatural world to know them by reputation and he uses that to boost his profits. The bidding frenzy on Sam’s body parts is darkly funny and makes complete sense considering a lot of his customers will know and fear him.

The resolution to this plot was clumsily handled with a cliché misleading gunshot sound designed to make viewers think that Sam was shot before revealing it to be Clegg. Dean finding him at the last possible second is also fairly uninspiring as climaxes go. It’s unfortunate that such a clever and interesting plot ended this way as there could have been some form of moral victory or perhaps the monsters could have bid on Clegg’s body parts as a way for him to get his comeuppance in the most satisfying way.

After Dean being the morbid one earlier in the season it is now Sam’s turn. He has taken to moping and doing things like sleeping in until 10am and employing a demotivated approach to life in general. Losing Jack and failing to save their mother has him considering all of the bad things in life. Kaia’s death is mentioned as an example and Sam’s advice to Donna on relationships is very negative. Dean is there as the beacon of positivity to help his brother through this dark time which is almost funny in the way that their roles have been completely reversed. There’s nothing wrong with this as such but flipping the angsty character to Sam might get tiresome before long. 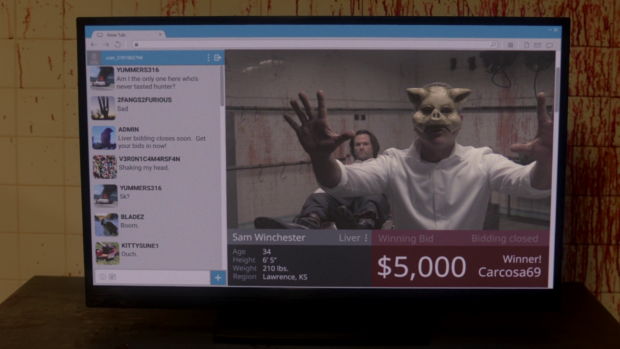 Sam goes up for sale

A well put together and engaging episode that proves Supernatural can still bring new concepts to the table. Bringing Donna in and developing her outside a more comedic role is certainly a good idea and her input to this episode sets her up nicely for the -hopeful- spin-off. Her relationship with Doug comes to a moving and tragic end in a way that makes sense and Donna is allowed to be intense in the way she approaches her interrogation.

The idea of a body part auction to provide food to monsters who choose to remain under the radar is a really strong idea with lots of potential for expansion. The resolution to the threat was clumsily handled and the implications are more or less ignored but the idea and the brief exploration of it was fascinating. Sam being the morbid brother now that Dean has cheered up isn’t bad as such but it could become tiresome.