Supernatural continues with the scramble to save Jack as Heaven comes under attack from the entity that runs the Empty.

Last week was a really moving exploration of how people deal with the inevitable loss attached to a terminal illness. The overriding message was enjoying the time left and preparing for life without a loved one. This episode shifts gears significantly to brushing that aside in favour of establishing a threat and setting up elements that will pay off later in the season. 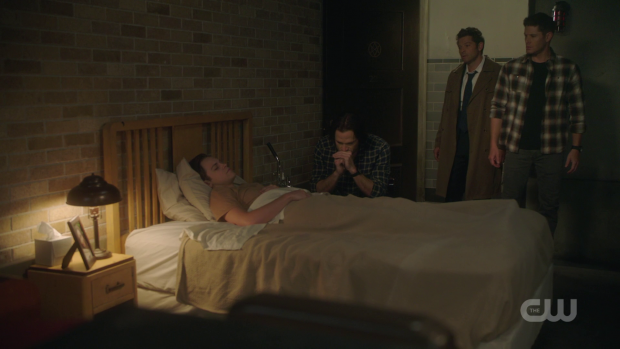 The episode begins with Jack’s death which I found to be a little surprising as I expected there to be at least another episode or two before his mortality would come into play. Even though anyone watching would know that Jack wasn’t actually going to die the handling of this was excellent. There was no real fanfare or extreme emotions from the Sam, Dean or Castiel; they simply struggled to comprehend the loss and had no idea how to react. This subdued reaction from each of the characters made it feel very real and was a lot more effective than if the choice had been to have their grief be overpowering.

All three of them have lost people that they care about over the years but that doesn’t make it any easier. I have to applaud Jensen Ackles, Jared Padalecki and Misha Collins for delivering unique and equally valid portrayals of grief that fit with their characters. Sam leaving to try to make a plinth because he feels guilty that he couldn’t do anything for Jack before now is very typical of Sam as he is the type to blame himself for things that are outwith his control. The broken axe preventing him from finishing his task is a clear symbol of his sense of helplessness and the grief hitting him at the point he can no longer distract himself is very relatable.

The montage of them drinking and remembering the good times was a poor choice as it accelerates though what could have been a really meaningful character exchange. Jack’s death is significant so time should have been taken to explore how the other characters react to it. Everything up until that point is good but using a montage suggests that there was an intent to rush through this portion to get to the rest of the plot. The speed of the storytelling doesn’t allow the death to land the way that it needs to even if it will be undone before the episode ends. 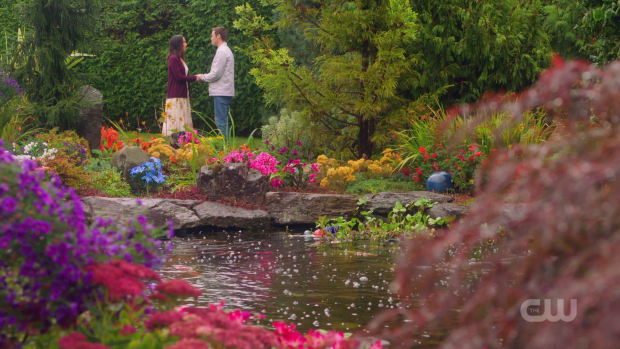 From the moment Dean wakes up with a hangover the episode shifts gears completely. Sam has the idea to recruit Lily (Veronica Cartwright)-last seen looking much younger in “Lily Sunder Has Some Regrets” – to help reverse Jack’s death. She is seen as a good option because she tapped into Angel magic in a way that nobody else they know has. I’ll admit I don’t entirely buy that as Rowena must have the same sort of knowledge but I can understand the attempt to draw parallels between Lily who lost a child and what the characters are going through in this episode even if it falls by the wayside in favour of plot progression.

The mechanics of the plan are somewhat beside the point but it involves using Jack’s soul to make up for the loss of his Grace to restore the delicate balance that allows him to exist. Lily calls it “a resurrection and a cure” and it seems a workable plan even though Dean is reluctant to risk damaging Jack’s soul. He eventually concedes that it’s better than the alternative and agrees to the plan.

Lily has a really selfish motivation for helping out which works well in context. Her prior encounter with the Angels has all but secured her a spot in Hell but she wants to turn that around so wants to guarantee she will be sent to Heaven when she dies in exchange for her help. To do this Anubis (Sean Amsing) has to be summoned as he was employed as a contractor who weighs up how good or bad people have been to determine where they spend their afterlife. This feels like a largely pointless diversion as Anubis contributes very little to the plot other than making it clear to Lily that she apparently has no hope of getting into Heaven. This bizarrely doesn’t dissuade her from helping out so the interlude feels even more pointless because of that. Anubis is a fun character and I’d like to see him used in some other way somewhere down the line though it would have to be more relevant. His “not my problem” attitude makes for a decent contrast to the desperation exuded by the other characters. The fact that Lily only has to do this good deed to secure a place in Heaven doesn’t really work either. 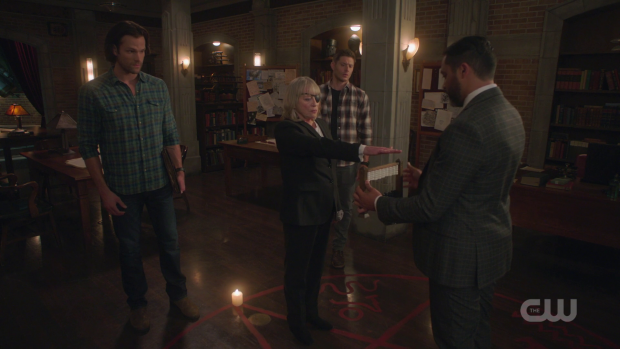 Jack ends up in Heaven and finally gets to meet his mother who is introduced as a child playing with a Dog that she remembers from her youth. The interactions between Kelly and Jack are excellent; there’s a real sense of a relationship that never had a chance between them and Courtney Ford projects the maternal attitude wonderfully. It alters the tone from the morbid one that defined the early part of the episode to something much more optimistic. Alexander Calvert plays Jack as if he’s at peace and clearly enjoying getting to know the mother that had only existed in stories for him prior to this. It’s tender, endearing and really well acted from both sides.

The presence of Jack in Heaven attracts some unwanted attention in the form of the Shadow; the entity that controls the Empty (first introduced in “Patience” and developed in “The Big Empty“). It wants Jack because he sees him as an Angel more than a Human so thinks that his afterlife belongs to it. The Shadow possesses Duma and makes it clear that it won’t stop until it gets what it wants though there is a loop hole as per usual. Castiel offers himself in exchange for Jack which is accepted but not instantly claimed. Instead the Shadow decides that it will collect what has been offered at the point where Cas has most to lose firmly establishing itself as a malicious entity that takes joy in making others suffer.

Unfortunately this loops us back round to characters keeping secrets from one another. Cas asks Jack not to tell Sam and Dean about the deal for obvious reasons. This isn’t a rut the show needs to get stuck in again as it can get immensely frustrating. Hopefully it will be too much for Jack and he will quickly tell Sam and Dean.

The Shadow makes for a great antagonist. It’s very casual in the way it conducts itself and is quietly sinister in its methodology. The Angels are terrified of it which paints it as their version of the Devil so there’s a lot to play with there. I wonder if it will be the key to stopping Michael. Next week will likely pick up that thread as Castiel is given his location as gratitude for his sacrifice that saved Heaven. 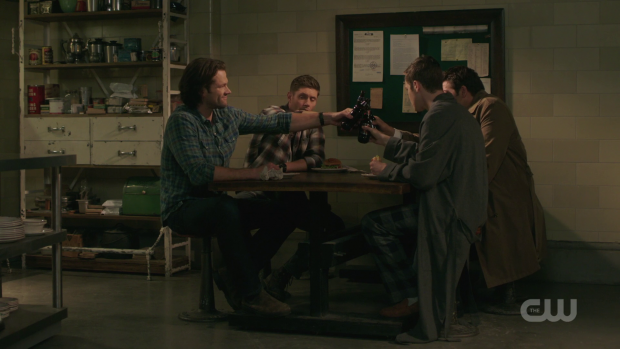 An unfocussed episode that rushes through some of the more interesting elements to speed the story along to the a certain point. Jack’s death is surprising in that it happens so soon in the episode with very little fanfare. It is of course clear that he won’t be killed off in this way but it was executed well in how unexpected it was. The grief/drinking montage was a poor choice as it speeds through what could have been a really meaningful character exchange. Instead it’s used to establish that Sam, Dean and Cas are grieving without actually spending the time on it. From the moment Dean wakes up hungover the episode shifts gears into finding a solution. Sam enlists Lily who somehow knows more about Angel magic than Rowena and a plan to use Jack’s soul to make up for the lack of Grace is formed. Lily’s selfish motivation works well in context and her desire to cheat her way into Heaven in exchange for her help explains why she would help well enough. The summoning of Anubis feels largely pointless no matter how fun a character he is because all it does is confirm Lily is beyond help which makes it questionable why she would continue to help. One good deed getting her into Heaven later on in the episode also doesn’t work.

Jack in Heaven works really well as he finally gets to meet his mother and we see what their relationship could have been like had she survived. Courtney Ford conveys the maternal attitude wonderfully and Alexander Calvert matches that with a similarly excellent performance. Jack seems at peace which contrasts with the morbid tone associated with the desperation to bring him back. The Shadow’s attack on Heaven is great and establishes it as a significant threat to the Angels. I really like how playful it is and that it takes joy in the suffering of others. It’s a great antagonist and I can’t wait to see more from it. Castiel’s deal to save Jack’s life and give up his at the point he has the most to lose is interesting though looping back round to characters keeping secrets from one another. It was frustrating before so I’m hopeful that the guilt weighs heavily on Jack and he confesses to Sam and Dean before long.