“Celebrating the Life of Asa Fox”

Supernatural explores the inevitable end of a Hunter’s journey as a group of them gather to mourn the loss of one of their own.

This episode may not take any significant steps to further whatever the season arc is going to be but it does prove that Supernatural is more than capable of telling an emotionally resonant, character driven story that allows characters to look back on the choices they’ve made in their lives. 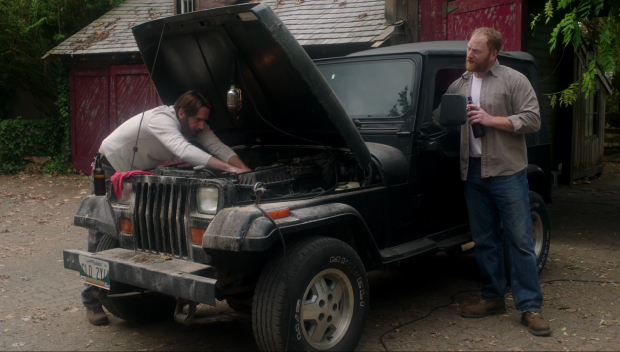 Asa Fox in a nutshell

Asa Fox (Shaine Jones) is the catalyst for the plot but he isn’t featured all that much since his death is what brings everyone together. A montage at the start of the episode gives us all the information we need on him. This montage does a remarkable job of establishing the main points about him in a really short time. We learn that he was a skilled Hunter, driven to do the job and that he had a jeep that he favoured as well as a not insignificant appetite for the ladies. From what we can tell right away he’s actually a lot like Dean which was probably the idea to act as shorthand for the sort of person he was. Having a wake for a character we’ve never seen before is a risky choice but it works very well considering. Having Sam and Dean not know him really helps as the audience can follow them but it’s still a risk to build up a character from scratch who is already dead.

The episode definitely puts its characters first from the social visit Sam and Dean make to Jody to the general interactions the various Hunters have with one another. It’s always good to see Jody and as expected she offers to feed them right away. She has always been a maternal figure for them in the absence of one so imagine my delight when she gets to meet their actual mother. They don’t share many scenes together but they do have a meaningful moment at the end of the episode when she assures Mary that Sam and Dean are good men. It has extra weight because it is made clear that Jody is talking mother to mother. Samantha Smith’s performance when she flatly replies that they aren’t the problem is excellent. She gives so much away with her weary expression.

Mary’s return in this episode worked really well even though she spent most of it on the sidelines. Establishing that she was the inspiration for Asa to take up hunting in the first place was a nice choice as it gives Mary a connection to the situation as well as a reason to really feel remorseful about his death. As far as she’s concerned this is all her fault and it’s something she can’t take back. Couple this with the fact that she has a second chance at life when Asa is permanently dead and there’s a lot of emotional heft to Mary’s role in this episode.

Along with the mother to mother moment with Jody, Mary has to deal with Asa’s mother Lorraine (Laurie Paton). She deeply misses her son and Laurie Paton portrays a realistic representation of grief to help sell this. Lorraine doesn’t break down completely because she has a responsibility to host the wake but there’s a fragility to her that is tested when Mary shows up. They have something in common in that they both blame her for Asa’s death and Lorraine definitely struggles with here. It’s a relatively understated but powerful moment between them as the blame is combined with Mary’s own self loathing. 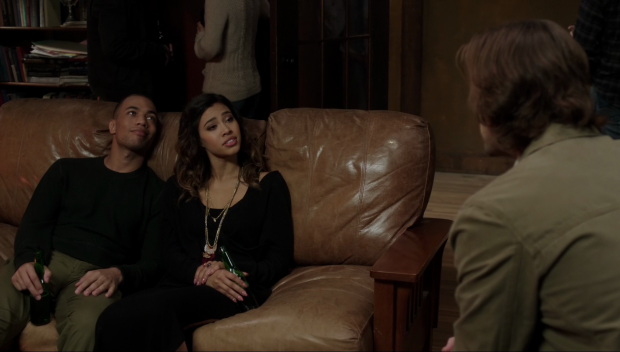 I hope we see these guys again

I found Sam and Mary’s interactions to be really interesting as Sam doesn’t idolise her the same way Dean does, most likely because he has no memory of her being alive so this gives him the distance he needs to approach the whole thing logically. Dean comes across as hurt because he is but Sam just wants to help if he can and make it known that she has support. The relationship Mary has with her sons is instrumental in making her return work and so far she has a very different yet equally compelling relationship with both of them.

The rest of the Hunters are good value and it’s good to see a group of like minded people getting together to share War stories. Many of them are about Asa and how badass he was but there are plenty about the individuals involved. It’s also a nice touch to have Sam and Dean be like celebrities to them. Of course they would be considering they have both come back from death, defeated things that should be impossible and -in the case of Sam- lived to tell the tale after being possessed by Lucifer. These stories and rumours would get around so it’s great to see how other Hunters perceive them.

Sam and Dean’s reactions were really amusing as they aren’t quite prepared for such hero worship so don’t really know what to say. Dean tries to be modest and fails while Sam just tries to get away from the situation entirely. These different reactions are completely in character and very funny to witness.

Since their are so many Hunters in the room, they suffer from being very broadly drawn., The most interesting of the group are Alicia (Kara Royster) and her unnamed brother (Kendrick Sampson). They are twins who were raised by a Witch so have learned a few spells to help them fight evil. Sam and Dean dabble a little in magic but they don’t have those kinds of skills. It’s an interesting take on being a Hunter and it’s a shame that we don’t get to see more of that in this episode. I do hope they return at some point as seeing them work with Sam and Dean on a case could be really fascinating. 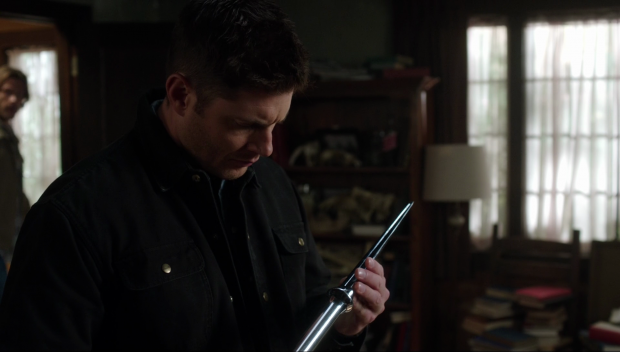 Dean contemplates his own fate

Elvis Katz (Billy Wickman) and Randy Bull (Darren E. Scott) failed to make any significant impression on me but as part of the overall ensemble they did what you would expect from them. They are skilled Hunters who have a few stories to tell and didn’t really need to be any more than that in the context of this episode.

Bucky (Mac Brandt) turning out to be the one who killed Asa didn’t really work. Since there was such a large group it was difficult to get a real sense of who any of them were so Bucky simply felt like a background character who later became significant. It wasn’t a twist the episode was building to as such so it did feel like it came out of nowhere and the reveal wasn’t all that effective.

I did like that the Demon attack was all about forcing that reveal. The demon is one that Asa had dealt with on a few occasions so there was the sense of a prolonged rivalry that our imagination can fill in the blanks on. There seemed to be more than that as well since the Demon seemed to respect Asa enough to find out who really killed him albeit in a soulless and lethal way.

This was handled well but comes a little late in the episode to really live up to its potential. I could detect a homage to John Carpenter’s The Thing with everyone being a potential suspect but very little time is spent on building the paranoia so the reveals happen almost instantly. Considering the time spent developing Asa and the other Hunters there was no way that this mystery plot could have any room to breathe and it’s a shame because it could have been a proper haunted house scenario where nobody could be trusted. The Demon was ably played by all that were possessed and managed to come across as sadistic and threatening. 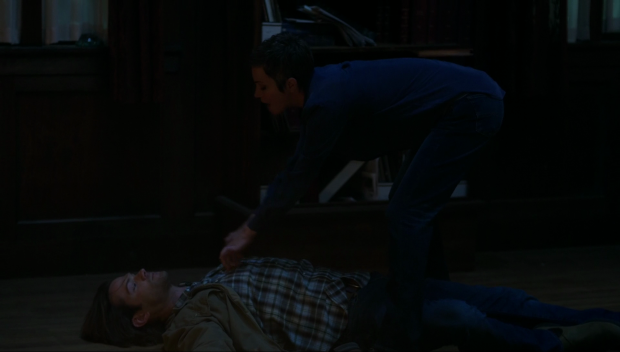 Sam and Dean are able to do some soul searching through learning about Asa. The similarities to Dean and the fact that he has an Angel Blade shows that he really meant business in almost the same way the Winchesters do. He was skilled, methodical and experienced so the way he died would seem out of place. The way it was played supports that as it was quick and jarring which shows how easy death could come for a Hunter. Dean seems content with the fact that he will end up the same way some day because that’s the life he’s chosen. Predictably Sam is a bit more hopeful but it’s hard not to believe that Dean has a point. It does seem inevitable at least as far as Dean’s concerned and it makes sense for him to think this way.

Death being an inevitability is developed through the appearance of Billie who comes to reap the souls of those the Demon manages to kill. I don’t feel like Billie showing up wasn’t all that necessary as the episode was already overstuffed as it was but it’s always good to see her interact with Dean with that sinister edge to the way she speaks to him. Everything she says feels like a threat and I wonder if she’ll ever have the opportunity to reap him like she desires. Her main purpose was to get Dean inside the house when he was locked out and to have Mary in her cross hairs. Since she can’t actively kill a human she will have to wait until Mary dies. The fact that Mary declines the offer to go back says a lot about her desire to live but this could all have been done in another episode.

A great episode that tells a stand alone, character driven story that works really well. It’s a risky choice to have a wake for a character we’ve never seen before but it works really well since Sam and Dean don’t know him either and the montage gives us enough information to go on using the shorthand of him being similar enough to Dean. His mother is a good character and the conflict she has with Mary for inspiring her son is an intriguing mother to mother moment as is the scene Mary shares with Jody at the end of the episode. 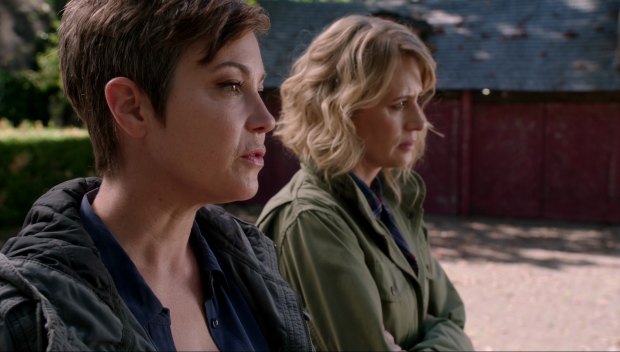 The other Hunters are good value if a little broadly drawn and I hope the twins return as the idea of Hunters raised by a Witch who taught them spells is too interesting not to revisit. Not everything worked such as the reveal of Asa’s killer as it doesn’t really come from anywhere. Also the Demon attack isn’t given enough time to develop into the suspicious horror it could have been. Having Billie around wasn’t necessary either as the episode was overstuffed already. Despite the minor flaws it was a really compelling episode and reminded me of why I adore this show.

As a final point that I couldn’t weave into the review since it doesn’t comment on the quality of the episode one way or another. Is this the first episode of Supernatural actually set in Canada? It has always been filmed there but has it ever been set there? Other than “The French Mistake” of course.