Supernatural follows Lucifer’s attempts to regain his lost power and moves characters around to set things up for the remainder of the season.

Mark Pellegrino is one of the best assets this show has. There has always been a huge risk of his version of Lucifer becoming stale because too much of a good thing can easily turn into a bad thing but the combination of acting and writing keeps this character consistently excellent. 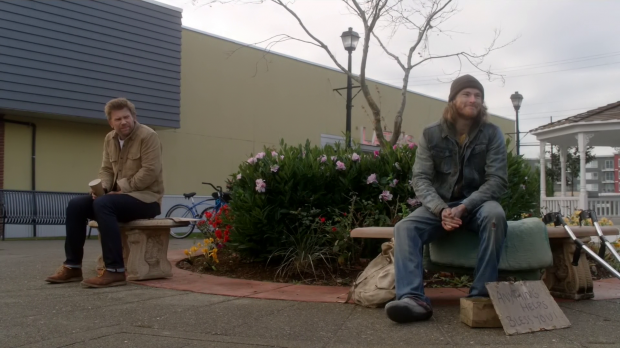 Lucifer at his lowest point

This season alone has seen a number of shifts in Lucifer’s power level. He began the season at full strength but trapped on an alternate Earth but had his power depleted when his Grace was used to open a portal and now he’s scavenging for any scrap of power to regain what he has lost.

Starting the episode by likening him to a homeless man is a relatable way to sell Lucifer’s predicament. Take away the fantasy ideas and he’s basically a man who once had everything and has made mistakes that have left him with nothing. Lucifer is at his lowest point at first and that’s an interesting thing to explore. Mark Pellegrino plays the desperation perfectly and bring a lot of humanity to the role which is of course a stark contrast to his usual arrogant self. Vulnerability isn’t something we see much from Lucifer so it’sall the more striking to see just how desperate he is.

A failing of the episode is that it doesn’t last long. Seeing him experience things he never had before such as hunger and helplessness was intriguing and definitely had enough mileage to sustain at least an entire episode. Not that what came before was bad but it’s slightly disappointing that compelling character drama is quickly burned through so that the overall season plot can progress. 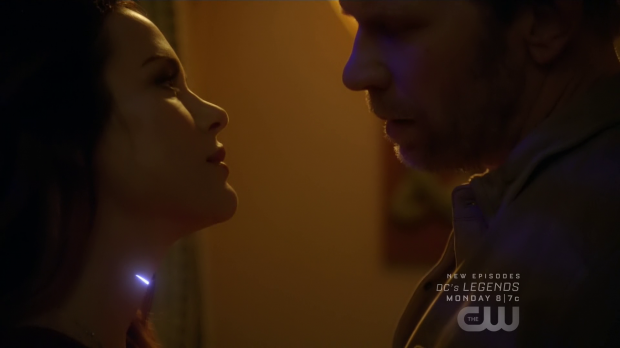 Lucifer’s short friendship with Tim (Neil Webb) works really well because of what Tim represents. He embodies kindness and decency despite having nothing and dealing with an injury. Lucifer is very much a physical manifestation of entitlement and it makes him seem really pathetic here which definitely appears to be intentional. Tim takes pity on him and shows him that kindness isn’t about sharing riches it’s more about doing everything you can to help someone who needs it. For a while I thought the episode would be about Lucifer learning that lesson and achieving something resembling humility. Sadly the opportunity to do so is wasted because Tim’s main purpose is to tell Lucifer about a Faith Healer who actually heals people which makes the odds pretty good that she’s an Angel.

Thankfully abandoning the potential “Lucifer learns humility” plot for what the episode is actually about proves to be really interesting. Lucifer tracks down Sister Jo aka Anael (Danneel Ackles) and makes his intentions to kill her clear but she convinces him that keeping her around to periodically sip at her Grace -almost not a euphemism- is a smarter plan because it means he doesn’t have to find another Angel.

Anael is a great character who makes the perfect partner for Lucifer. They are both similar for not enjoying Heaven for their own reasons. In Anael’s case her job was to count the new souls that came in which certainly doesn’t seem like the most engaging occupation so she saw “The Fall” as an opportunity to reinvent herself and turned her ability to heal Humans into a vocation. She heals Humans and gets paid for it so everyone wins and she gets to do some good in the world albeit for selfish reasons. Danneel Ackles leans into that murky area making it clear that Anael doesn’t really care about Humans as such but respects those she does business with. It’s another great idea in a season full of them and immediately creates a strong foundation for the character to be built on. 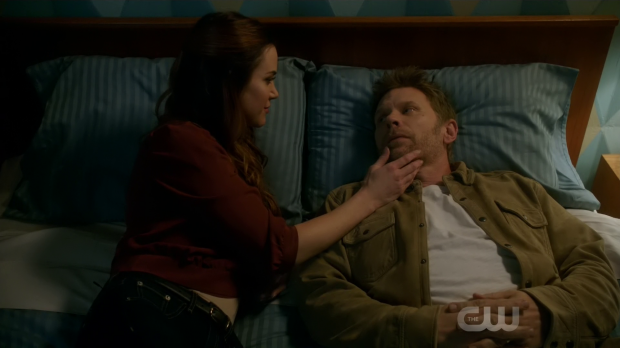 The relationship that quickly develops between Anael and Lucifer is compelling to watch. Lucifer starts out weak but quickly regains his strength by taking some of her Grace before allowing her to recharge. The scenes depicting this transference look drug fuelled and sexual in nature which matches up with their reactions to it. Anael in particular seems to treat this “sipping” as a spiritual experience and I couldn’t help but be reminded of various depictions of Dracula feasting on his victims. Visually there were similarities in the way Lucifer fed on her Grace to a Vampire feeding on a victim and Dracula is often characterised as a really seductive presence so the comparison was there to be made.

Interestingly Lucifer is the one being seduced. Amael has him completely manipulated into doing what she wants him to do while making him think that it’s actually what he wants to do. She suggests the arrangement they have and clearly gets something out of it in terms of sensations as well as knowing that the Devil himself is eating out of the palm of her hand -well technically her neck- so there’s a lot for Anael to gain.

Eventually she uses Lucifer as a bargaining chip to take over Heaven. The Angels are terrified and disorganised as a species so are in need of leadership. Anael wouldn’t be accepted because none of the Angels have any reason to respect her but since they fear Lucifer so much he can lead them and she can continue to manipulate him. Once again she wins by finding herself in a position of power without Lucifer being aware of her seductive nature. 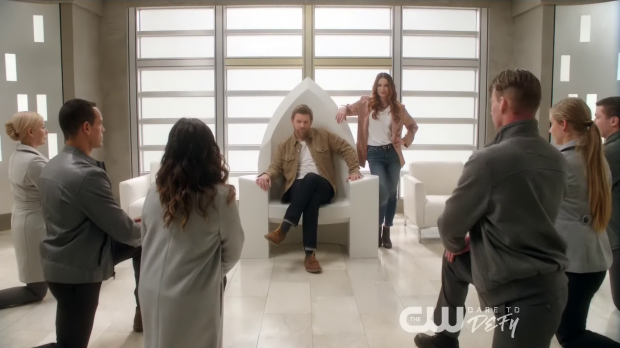 Sam and Dean are still attempting to come up with a plan that gets them to the other Earth to save Mary and Jack. It involves bringing Donatello back to read the Demon Tablet as they try to track down Lucifer as a power source for their attempt. They learn about Castiel being Asmodeus’ prisoner which causes more regret from the Winchesters who feel that they should have realised. Castiel doesn’t blame them for what happens and wants to focus on the task at hand which thankfully happens with the minimum of angst.

There’s a lot of setup in this plot such as Donatello being manipulated by Asmodeus’ posing as Cas. It makes for a funny scene as Donatello is carrying a bucket of fried chicken and Asmodeus looks a lot like Colonel Sanders with his white suit. I’m still not buying the threat level of this character but he doesn’t seem like he is being built as anything more than an idle distraction. He’s powerful enough to keep everyone on their toes but won’t be the big bad of the season. It’s good to have a disposable temporary antagonist as the show works up to the real one.

He does have some surprises up his sleeve such as the Archangel Blade; a blade that can be wielded by Archangels to kill other Archangels making it the perfect weapon to dispatch Lucifer. Asmodeus has an Archangel at his disposal in the form of the -long believed dead- Gabriel. Part of me thought that it might be the Michael inhabited Adam but the writers haven’t got around to returning to that yet. Gabriel reappearing is something I’m very excited about as episodes featuring him are some of the best even to this day and his presence offers another easy way for the upcoming Scooby Doo crossover.

Sam and Dean also come across Mr. Ketch who offers to team up with them to achieve their shared goal of taking down Lucifer. Naturally they are loathed to trust Ketch who has betrayed them in the past so we have a pseudo cat and mouse game where they get the upper hand and Ketch escapes. He attempts to win their trust by saving them from Lucifer but Sam and Dean are still reluctant to work with him especially after he admits to working with Asmodeus before offering to use that arrangement to supply them with information. My thinking is that this plot will play out with Ketch seeming equally trustworthy and untrustworthy before either Sam or Dean decides to give him the benefit of the doubt before finding them betrayed once again. It seems to be the nature of Ketch and I’m actually fine with that. 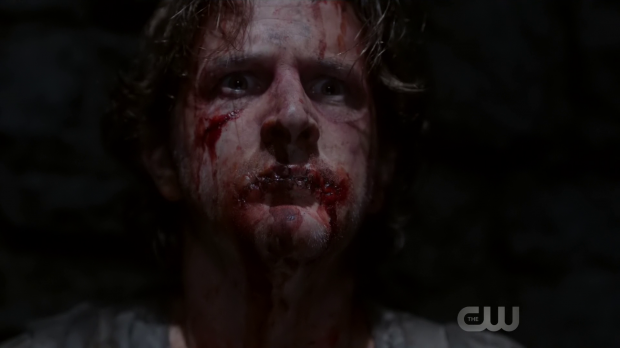 An excellent episode that introduces an engaging new character and sets things up nicely for the remainder of the season. It’s initially disappointing to dispense with a plot involving Lucifer learning humility from a kind homeless man but what replaces this makes up for the loss of potential. Amael is a great character and the partnership she undertakes with Lucifer is excellently handled. Lucifer feeding on her Grace comes across as drug fuelled and sexual while inviting comparisons to various interpretations of Dracula. The most interesting thing about this is how in control Amael is of the situation. She easily manipulates Lucifer into thinking he’s getting what he wants while making him do what she wants. As such she becomes the power behind the throne in Heaven thanks to carefully chosen words while Lucifer feels like he’s the one in control.

Sam and Dean work to find a way into the alternate reality and recruit Donatello to do so. Asmodeus hypnotises him by posing as Cas therefore presenting a problem but there’s the possibility that Mr. Ketch can feed them information on Asmodeus assuming he can be trusted which seems really unlikely. There’s a lot of setup in these scenes though a lot of compelling plotting too. The end reveal of a -long thought dead- Gabriel being the key to killing Lucifer thanks to a new blade has me really excited as Gabriel coming back can only be a good thing.