Supernatural flashes back to Sam and Dean as teenagers when a case turns out to not be as solved as they believed.

It’s appropriate with the show being so near its end that some time would be taken to reflect on Sam and Dean’s childhood in some ways. Their father raised them as Hunters and that upbringing deeply impacted both of them in different ways. Dean felt it was his duty to follow in John’s footsteps where Sam wanted to escape the life he had been forced into so that he could find his own path. This episode isn’t about those things but they do factor in as any story featuring the younger Winchesters has to. Sam has a college guide in his possession showing his inclination to escape and Dean is always firmly on task when it comes to finding the supernatural creature plaguing the town. 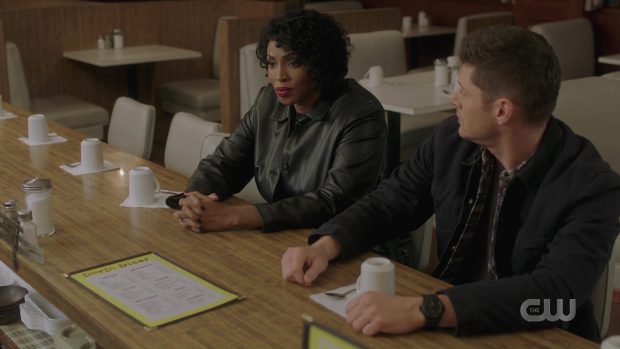 The episode is actually about secrets and the toll keeping them takes. Cas told Dean something at the end of the previous episode that he has kept to himself and is wrestling with. The connection between the past and present is formed when young Dean (Paxton Singleton) discovers the Baba Yaga’s nest and chooses not to tell anyone else. Present day Dean reflects on having nightmares about what he saw that day for a long time afterwards. In that moment Sam validates his decision to keep the secret by reminding him that a lot of secrets were kept back then. It doesn’t quite reassure Dean because Sam’s use of the past tense adds to his guilt since he is keeping a secret at that very moment so has to deal with the fact that despite everything they’ve been through, keeping a secret from Sam isn’t a habit that he can easily break despite what promises have been made. The link between the past and present is definitely clear but it’s also tenuous; the two secrets don’t link all that well and the attempt to connect them feels forced.

For the most part the episode is fairly standard Supernatural fare with the usual steps being taken in service of killing a monster of some sort. The flashbacks do change things up somewhat though the addition of Caitlin (Kelsey Crane) as an old friend aware of “the family business” calling them to investigate something does seem inconsistent with what we know of their history. Way back in season one the fact that Dean’s old flame Cassie knew the truth about what goes bump in the night was a surprise to Sam because they were brought up to make sure that people didn’t learn about what they really do. Granted Caitlin stumbled into it and ended up involving herself but in the episode in question Sam talks to Dean as if such a thing had never happened. With a show that runs as long as this various retcons are bound to creep in from time to time and this isn’t a major issue as it would make more sense that bystanders would end up learning the truth about the supernatural as they work to kill whatever happens to be endangering people.

The flashbacks in general are very watchable. Christian Michael Cooper and Paxton Singleton impress as the young Sam and Dean. They do a really good job echoing the performances of their older counterparts while also accounting for their age resulting in a familiar yet unique portrayal of the characters. Such a thing is difficult to pull off believably so they definitely deserve praise for their efforts. The case itself in both time periods is nothing all that special though Dean’s guilt over not finishing the job back then adds an extra dimension to it. Jensen Ackles’ performance is particularly noteworthy with Dean being internally tortured by the secret he is keeping compounded by the realisation that he didn’t actually kill the creature back then and others have suffered as a result of it. Naturally he wants to make things right but there’s a distracted quality to him that makes him appear haunted by everything that he’s dealing with. 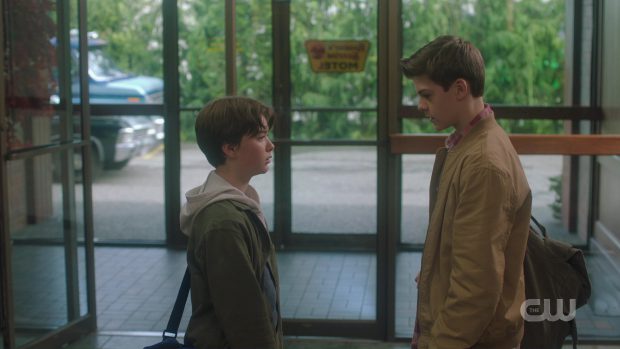 Another thing that links the two time periods through Dean is fear; it is observed by young Caitlin (Elle McKinnon) that Dean is sweating as he is on the Hunt which indicates that the situation has him scared. In the present day he admits to Caitlin that he’s always scared which prompts her to acknowledge how much he has changed and grown up since she last saw him with added commentary about people telling the truth more as they get older because lies don’t make anything better. There’s a couple of things to take away from this exchange; the first is that Dean has developed to the point where his bravado has started to wear away as he grows more comfortable with the notion of there being no shame in vulnerability and the second is that the secret he’s keeping is eating him up inside to the point that he feels the need to tell Sam about it.

This is backed up by Billie’s appearance earlier in the episode. Up until that point he at least felt like he had time to wrestle with the knowledge he had and try to figure out an alternative but learning that God has destroyed every reality except this one has escalated things to the point where a decision needs to be made and action needs to be taken. This signals the point where things are about to ramp up massively with the final four episodes undoubtedly due to focus on the fight against God.

Sam and Dean are going into this fight divided after Sam doesn’t take well to Dean’s secrecy to the point where he can barely look at him let alone talk to him. Dean tells him that Jack has to die in order to kill God and Amara which doesn’t sit well with Sam who clearly believes that there must be another way. Billie’s appearance has for now convinced Dean that it’s the only way for them to win and be free of God’s influence. Sam is understandably enraged that something so significant would be kept from him but Dean stands by his reasoning however flawed that might be. The truth was kept from Sam because Dean didn’t want to be reminded of the questionable morality around what he feels needs to happen in order for them to win. He references Sam raising ethical questions around killing Amara as something that complicated that decision so part of his decision was around not letting Sam divert his attention by forcing him to consider the morality of the situation.

Dean is not an amoral person but historically he has tried to ignore the wider implications of a decision because it gets in the way of what he feels that he has to do. Ultimately he does usually end up doing the right thing once he comes to his senses but he often needs Sam to help him do that. Sam always has been and always will be his conscience so his decision to keep Sam in the dark is because ignoring his conscience is what he feels he needs to do in order for them to win. At this point Dean feels that there are no options but now that Sam is in the know an alternative might be found. This scene was brilliantly acted by Jensen Ackles and Jared Padalecki with the weight of what they’re facing painfully evident in the way way they portray the characters. It’s unlikely that killing God and Amara will be where this ends but and with only four episodes remaining we won’t have to wait long to find out. 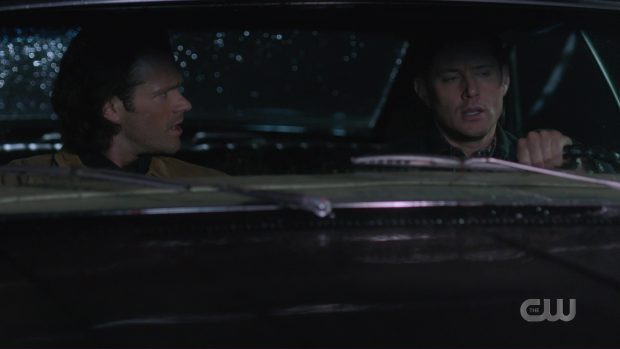 A solid episode with a strong portrayal of young Sam and Dean and a compelling exploration of the toll keeping secrets takes. The episode is all about keeping secrets with the flashbacks detailing a time that Dean discovered something and kept it to himself despite having nightmares about it for a long time afterwards. It links to the present day where Dean has chosen to keep what Cas told him a secret from Sam though the link is very tenuous with the two periods not lining up all that well and any attempt to connect them feeling forced. The flashbacks are on the whole very watchable with the two young actors doing a really good job of playing Sam and Dean at that age. It’s clear they are the same people but the performance also accounts for their age so it’s very impressive. The case itself is nothing special in both time periods though Dean’s guilt over not finishing the job back then adds an extra dimension to it. Jensen Ackles’ performance is especially noteworthy with Dean being internally tortured by his decision to hide the truth from Sam. Dean’s growth is highlighted by his admission that he’s always afraid showing that he has grown out of the bravado and isn’t ashamed of his own vulnerability any more.

Dean’s experience of dealing with this revived case combined with Billie’s appearance prompt him to tell Sam the truth and Sam doesn’t take this well. He’s enraged at being kept in the dark despite all that they’ve been through though it becomes clear that Dean’s real reason for doing so is that he was wrestling with having to do something terrible and needed his conscience to be silenced so that he would be able to go through with it. He’s not an amoral person and usually ends up doing the right thing but Sam is often the one to prompt him so part of his decision was around making sure that Sam didn’t divert his attention by forcing him to consider the morality of the situation. It’s unlikely that the show will end as predicted with Jack killing God and Amara; with only four episodes remaining we’re about to find out.