Supernatural picks up the Lucifer love child plot as the Winchesters hunt a ghost left over from a recovered shipwreck and Mary continues to work with the Men of Letters.

One standing challenge that must come up a lot in the writers room is how to make a ghost hunt not feel derivative after nearly 12 years of doing them. Ghosts are frequently used on this show so you might be forgiven for thinking that there’s nothing new to be done with them. 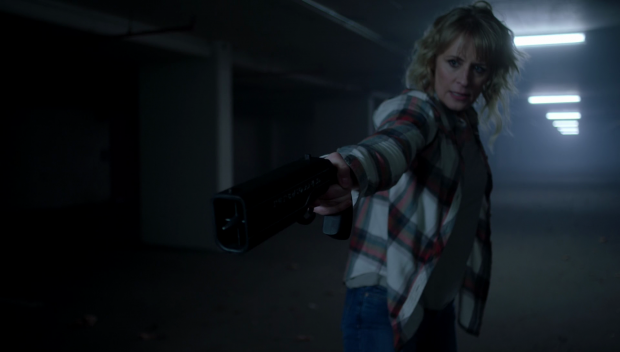 Mary has the gadgets and the skills

This episode is largely fairly standard fare in terms of how the Ghost is identified but the episode manages to find a relatively fresh way to spin it. A lingering thread from a previous season is picked up in the form of Crowley’s son Gavin (Theo Devaney). When he was introduced back in the season 9 episode “King of the Damned” -also see an early attempt at a review here– there were warnings about damaging the timeline but it was never followed up on so it seemed like an empty threat. This episode sort of addresses that with his disappearance being the cause of the ghost that is killing people. He was supposed to run away with her but she felt abandoned when he didn’t show up which led to her becoming a vengeful spirit when the ship sank. It’s not as dire a consequence as Sam initially made out but it does at least deliver on changing the timeline having consequences.

Gavin’s personal connection to Fiona Duncan (Christine Gavin-Bartlett) added weight to the story and made it more interesting as a result. Gavin isn’t a well developed character but at first glance he seems completely different from his father which is notable in itself. His regret over leaving Fiona feeling abandoned underpins the episode and allows the ghost hunt to be approached in a different way.

His decision to allow himself to be sent back in time so that he can be with Fiona is a solid pay-off and works really well. The desire to be with her seems genuine and it gives the episode a sort of “love conquers all” sentimental resolution that Supernatural doesn’t often allow. It’s nothing Earth shattering but it’s a bit of a departure from the norm. The end of this plot was puzzling as it should really have corrected the timeline and undone all of the deaths as well as Sam and Dean’s memories of the events but it’s not clear if any of that happened. Something more could have been done to explain how this wraps up.

Rowena is used really well in this episode. This surprised me no end as she normally irritates me but Ruth Connell’s performance was more earnest and less over the top than usual so her presence managed to be a benefit to the overall experience rather than dragging it down. She is used by Sam and Dean to help gain Gavin’s trust because she is his Grandmother. Throughout the episode she acts much like a Grandmother looking to make up for lost time with an estranged Grandchild. This comes across as genuine throughout and I believe that it is always genuine because Rowena cares about her family in her own way. 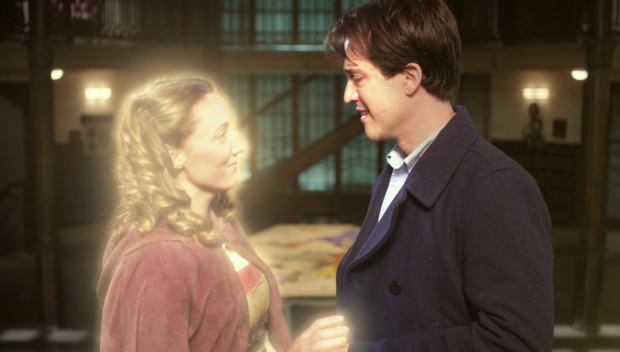 The way she acted around him made her conversation with Crowley all the more surprising. Going back in time to his death was absolutely Gavin’s idea and he was content to do it but there’s an extra sting to it as Rowena uses it as her revenge against Crowley for making her kill Oskar to remove the Mark of Cain from Dean back in “Brother’s Keeper“. Rowena plainly points out that she resents him for that and was looking for a way to get back at him. Crowley clearly feels pained by the loss of his son in this way which makes the moment more effective.

Parenthood is a central theme of this episode in each of the plots. Mary working with the Men of Letters still seems to be largely on her own terms but there’s a sense that the arrangement is starting to shift in their favour. Mr. Ketch praises her for her efficiency but isn’t happy that she keeps in contact with her sons. Mary isn’t willing to budge on this because her family is everything to her but I wonder how long Mr. Ketch and the Men of Letters will continue to allow her to operate in this way without trying to do something about it. This plot isn’t moving all that quickly but it is starting to creep in. I’m also wondering if there’s an attraction between Mr. Ketch and Mary. There seems to be one on his side at least so that could complicate things further.

I like that Mary finally told Sam and Dean about her involvement with the Men of Letters. It doesn’t feel like the dishonesty went on longer than it should and the subdued reaction as Sam and Dean calmly told her their views on that was really well played. Not everything needs to be a dramatic shouting match and the disappointment shown here was far more effective. They are also trying to accept the situation but I wonder how far their discomfort will take them.

Mark Pellegrino’s return as Lucifer is picked up from last week and it’s great to see him back in the role. The explanation for how Lucifer can be inside that vessel again is really contrived but I’m willing to accept it if it allows the best actor for the job to continue playing the character. 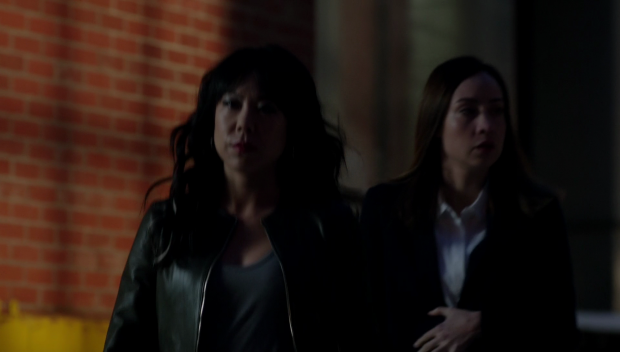 Lucifer and Crowley’s scenes were immensely entertaining. Crowley thinks he has the upper hand because he has Lucifer in chains but Lucifer doesn’t seem bothered by it at all. He even asks Crowley what he thinks is going to happen because we all know that he will eventually get out. Until that happens he is content to bide his time and wind up Crowley constantly. Crowley tries to act tough but his resolve frequently cracks especially when it comes to Lucifer’s love child. Crowley thinks the child was terminated but Lucifer knows different because he can feel it out there. Even though he’s in chains Lucifer has the upper hand and Crowley realises that pretty quickly.

Kelly Kline aka the mother of Lucifer’s child makes her return in this episode and is really struggling with the prospect of giving birth to the son of the Devil. She is also being targeted by Angels who don’t want this child to exist but she finds help from another of Hell’s Royalty, Dagon (Ali Ahn) who protects her and gives her some much needed advice about her child. The Nature Vs. Nurture debate is raised when Dagon points out that upbringing is everything when it comes to a child turning into a good or bad person which opens Kelly’s mind to the idea that her child doesn’t have to grow up evil if she sets a good example for him. Lucifer saying Dagon’s name at the end of the episode suggests that there is more to this as it has been established that these Demons were created by Lucifer so may be loyal to him in some way. It may be that she has been tasked with protecting the child so that Lucifer could raise him in his own image. It could equally turn out that Dagon has her own agenda or has a genuine desire to see this child untainted by his father. It’s all to play for but interesting to contemplate.

A strong episode that picks up some old plot threads while delivering a new spin on the all too familiar ghost hunt. Tying the ghost to Crowley’s son, Gavin was a nice touch as it developed a personal connection the the problem that was solved in a really interesting way with Gavin sacrificing himself so that she didn’t feel abandoned. It’s a bit of a hokey “love conquers all” ending but it works well enough. Rowena is actually used well in the episode when she seems to be genuinely affectionate towards her grandson but uses his decision to sacrifice himself as a way to get revenge on Crowley for Oskar. It’s cold and well played especially with Crowley’s pained reaction.

Mary working with the Men of Letters is developing slowly but starting to creep in. I’m glad that Mary was honest with Sam and Dean’s and their disappointed reaction being more subdued than I expected was a good move. Mark Pellegrino’s return as Lucifer was really welcome even if the explanation for that happening was really contrived. I like that he has the upper hand against Crowley even though he is the one in chains and the fact that Crowley realises that makes it even better. Kelly’s contemplation of what having this child means for her and the world in general is interesting if a little underdeveloped. The idea of Nurture being the most important thing in determining if a child grows up to be good or evil gives her hope but it’s unclear what Dagon’s true agenda is. 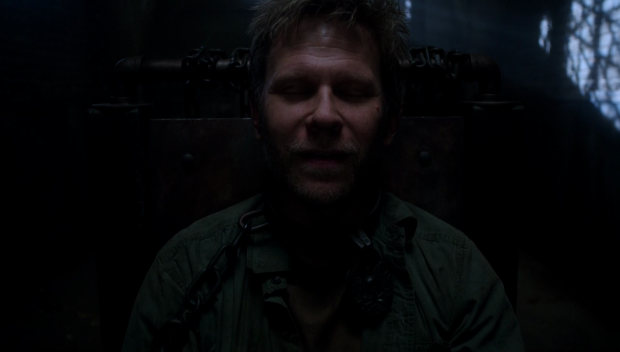 Lucifer is in complete control