Supernatural returns from hiatus to pick up where it left off with Sam and Dean’s arrest after their attempt on the Lucifer possessed president’s life.

I get the impression that the writers had written themselves into a corner with this scenario. Sam and Dean being arrested by the government is one of those problems that is pretty off the charts in terms of stakes. Sam and Dean generally don’t kill humans so any attempt to escape has to be non-lethal. The problem with that is the soldiers won’t extend them the same courtesy so they have no real choice but to sit on their hands and wait for an opportunity to present itself. 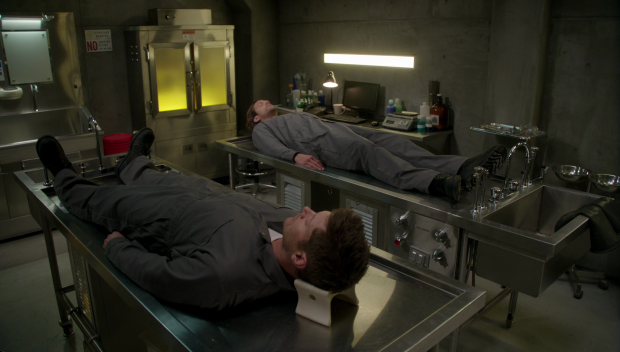 Escape should in theory be easy as Crowley can nip in and out of anywhere he likes undetected so the challenge then becomes learning where they are. Crowley says that all of his demonic government operatives don’t have the clearance necessary to find anything out so there’s nothing he can do. This means that everyone who isn’t Sam and Dean spend the episode chasing their tales as they wait for any sort of indication of where they are.

Meanwhile, Sam and Dean are locked up in separate cells completely isolated from each other and the rest of the world as a means of psychological torture. Dean remarks that it’s worse than Hell but there’s no way that makes sense. Each of them have been through worse so this enduring this shouldn’t be any problem. It would have been amusing to have Sam and Dean completely unphased by their captivity while their captors were confused by the whole thing.

The prison scenes weren’t especially interesting but they easily could have been. Stephen Lobo’s Rick Sanchez had all the potential to be an engaging character but never quite got there. He had a lot more to do than in the previous episode but he was mostly reactive to what was going on. There was nothing especially interesting about Sam and Dean in their cells either. Granted they were on their own but it took the form of a montage to whittle away the weeks that they spend in captivity. Hearing about the previous incidents that they have become wanted for was a nice nod to the past though.

Sam and Dean’s escape from the prison felt far too easy considering they were supposed to be in an off the books Maximum Security Facility. They got out with pretty much no trouble at all and the prison felt oddly empty. I suppose this is down to budget constraints but the lack of activity makes the whole thing less believable. 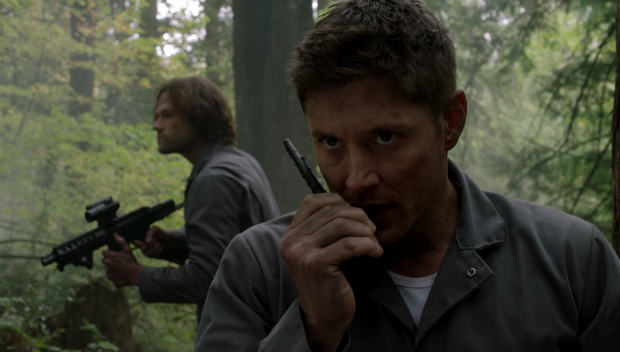 Sam and Dean give the soldiers a warning

The episode does improve when the reason for the title comes into play. Sam and Dean using their hunting skills to outwit the soldiers was handled well and some of the traps they set were clever. It was a very similar scenario to the first Rambo film First Blood and showed how resourceful Sam and Dean can be in desperate situations. The chase is a little too quick but great while it happens.

Mary and Castiel’s reaction to the situation was really well done. Castiel feels lost as he really wants to protect Sam and Dean but has no idea how to do this. Instead he focuses his energies on picking up the slack created by them not hunting but he realises that he isn’t up to the task. We don’t see this particular story but Misha Collins’ performance gives us a really slick insight into his feelings on his failure. We could have seen an episode where he fails to bring down a vampire but we have a fair idea of what Castiel’s approach would have been and his admission that he was in over his head so had to run away is really powerful.

Mary wants to know where her sons are and decides that she can’t turn her back on hunting in their absence. Castiel’s story inspires her to bring down the Vampire before any more lives are lost. Cas and Mary make for a really natural pairing and I hope to see more scenes between them in the future.

There are other missteps made in the episode such as the inclusion of Billie the Reaper. Sam and Dean were so affected by their captivity that a deal was made with Billie to kill them temporarily so that they can be moved to the Morgue and escape from there. This felt very manufactured to me as there should have been other ways to get around this problem plus as I’ve mentioned spending 6 weeks in prison shouldn’t have been too much of a hardship. 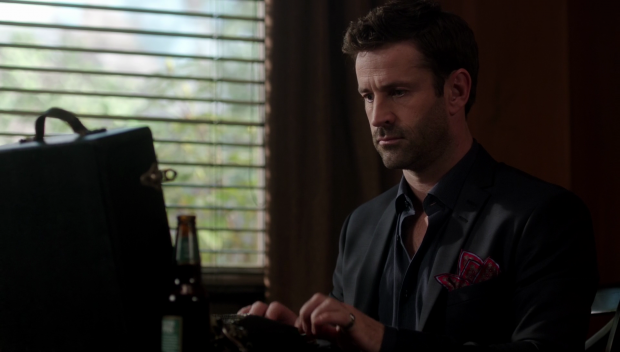 The price of this escape being that a Winchester would be killed at midnight didn’t work for me either. Naturally Mary would be the one to volunteer as this show wouldn’t kill off one of the brothers but if Mary dies now then what’s the point in her being resurrected? Castiel killing Billie to stop her reaping Mary doesn’t really work either. Billie is far too interesting a character to be killed off so suddenly. She still has value within the show so there’s no need to dispatch her so soon. Also, does this mean that the deal has been nullified? I highly doubt it’ll be quite that simple so is there more of this to come? As I said above I feel that the writers had written themselves into a corner and came up with this contrived way to get out of it.

I did like the development of the Men of Letters arc that has been slowly building over the course of this season. Their snooty and morally questionable way of doing things with near infinite resources reminds me of the Watcher’s Council from “Buffy the Vampire Slayer” which isn’t a bad thing as expanding the mythology makes sense the longer this show runs.

Seeing the attempts by Mick (Adam Fergus) to recruit American Hunters was pretty funny due to the reaction of the Hunter that he speaks to. It’s only one example but it’s clear that it’s a common response. This pays off later when Mary delivers the answer he’s looking for.

Using their recruitment drive as the motivation to help Sam and Dean was a really good idea as well. It’s all about positive word of mouth that would be generated by helping them to escape. The difference in approach is also represented by disapproval of leaving all involved with capturing them alive. We don’t see much of Mr. Ketch in this episode but the detached way he kills everyone involved says a lot about him. It does wrap things up a little too neatly but it’s good development for the Men of Letters. 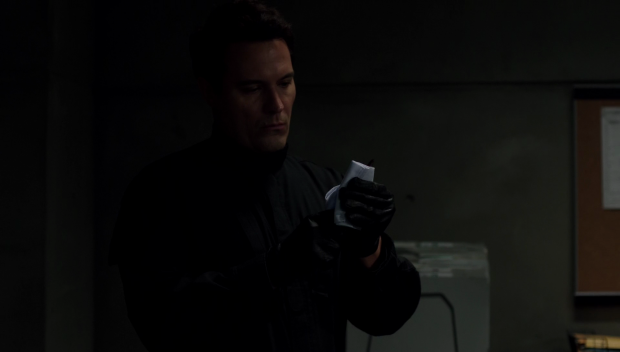 An uneven episode that does some things well but misses the mark on others. Dean’s remark about a government prison being worse than Hell really doesn’t wash which makes the whole scenario seem really manufactured. There were easier solutions than the one they used and the whole deal being nullified by Billie’s death is problematic. Using their skills as Hunters to outwit the soldiers after their escape was well done though.

Mary and Castiel have some promising interactions and Misha Collins delivers a really powerful performance when he talks about his inability to track and kill a Vampire. The development of the Men of Letters plot is another thing I liked as it showed the difference in approach between them and the Winchesters.