Supernatural returns to the alternate world as Sam and Dean are still trying to find a way to get there in order to rescue Mary and Jack.

We haven’t seen the alternate world since Jack made his way there back in “The Bad Place” so returning to it was definitely on the cards. Since Jack’s arrival Michael and Zachariah (Chad Rook) have been playing mind games in order to manipulate him into opening a portal to the other world. Jack is strong willed enough to resist the mental manipulation but it’s clearly effective in some ways thanks to the particular imagery used. Using Castiel to tell Jack that Humans don’t deserve the world considering how deeply they’ve damaged it. This is accompanied with extreme examples of how Human intervention has caused harm to the Earth. 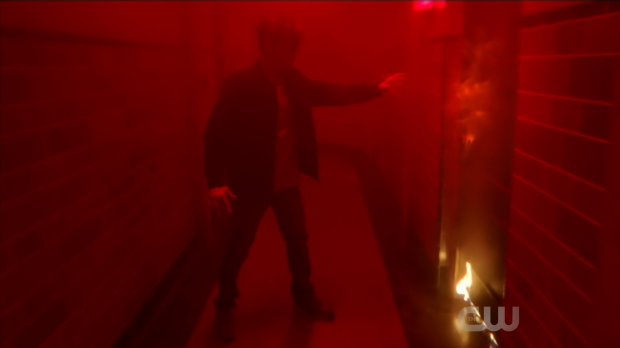 It’s a very Angelic perspective indicative of a massive superiority complex on their part but it completely works based on what has been set up. There’s also an element of hypocrisy to it considering what the Angels and Demons have done to this alternate world. I wouldn’t expect any humility from Michael and his followers considering how much they clearly despise humanity.

Jack’s resistance to their efforts cis a source of frustration for Michael in particular who decides to take matters into his own hands. Thankfully before that can happen Jack meets Mary and the pair devise a way to escape thanks to the warding being weak on a section of their prison. It’s pretty convenient all told but it does get the plot moving and allows for a charming Jack/Mary team-up. Like Sam and Dean, Mary has a paternal connection with Jack and is determined to protect him. She also knows what he’s her best chance for returning to her own world and reuniting with her sons so it’s in her best interests to stick with him.

What we see of their dynamic is pretty strong though the episode doesn’t take advantage of it in the way that it should. They escape from their prison fairly quickly and after that they are caught up in the plot so the episode relies on the performances to sell the connection that the script doesn’t actually allow room to let their relationship grow organically. 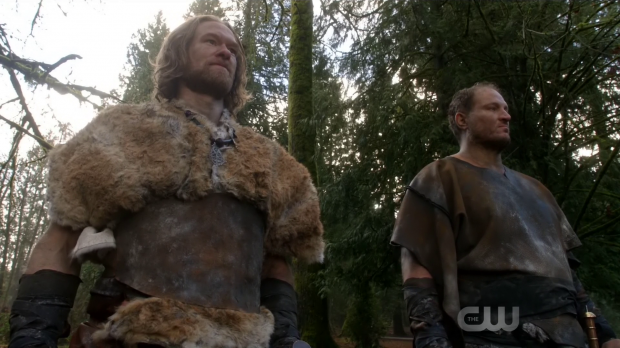 The most significant thing for Mary is encountering this world’s version of Bobby Singer and exploring the differences in their experiences. Bobby knows her as Mary Campbell, a Hunter who died some years ago and Mary’s last memory of Bobby will be years old as she won’t have seen him since she died the first time. Their interactions give us the biggest clue as to the divergence point of the two universes. It seems to have happened around the time Mary was offered a deal from Azazel. In her world she took the deal which meant a lot of heartache for her family but led to ultimately positive worlds whereas in the alternate world she didn’t take the deal meaning that John died making it impossible for Sam and Dean to be born. Effectively this world is in such bad shape because Sam and Dean never existed which does seem a little over the top in terms of their importance but then again the world of the show has always revolved around them so it makes a great deal of sense in context.

Mary and Bobby’s casual yet cautious familiarity makes for an interesting exchange. They start off wary of one another but quickly transition to something friendlier as they swap stories about their respective worlds. Eventually Mary sees fit to trust Bobby with the fact that Jack is a Nephilim which doesn’t go down well as Bobby lives in a world where Angels have turned against Humanity. He isn’t willing to make any exceptions to his rule of not trusting them because he values the survival of his people too much. Not trusting Angels has gotten him this far so he sees no reason to stop. Respect for Mary allows him to demand Jack leave rather than kill him but that’s as far as it goes. He’s even willing to accept Mary leaving with Jack because he sees no reason to trust him. Jack does later prove himself by defending the people against the Angel attack which seems to change Bobby’s outlook a bit but there’s clearly a tension here that won’t disappear after one show of support from Jack.

Back on our world Sam and Dean are waiting for Donatello to translate the tablet so that they can make a trip to the alternate world. Cabin fever is clearly setting in as they become more than a little frustrated by the waiting. Dean passes the time in perfect Dean fashion by eating a lot of bacon and seeming content with the decision complete with a hilarious line about winning if bacon ends up being the thing to kill him. Sam is growing more impatient because he is desperate to rush into action but has to wait until Donatello provides the necessary information. 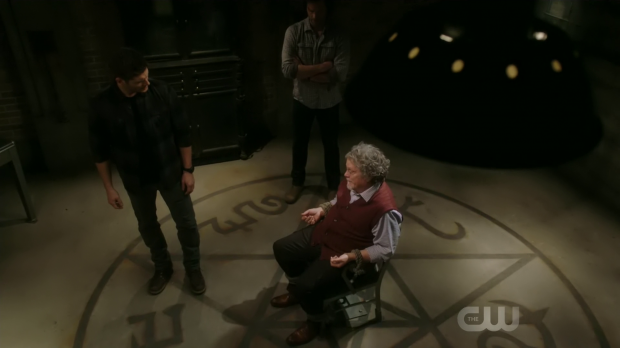 When he does it turns out to be a trick possibly thanks to the manipulation inflicted on him by Asmodeus in the previous episode. His lack of soul thanks to Amara means that he is more susceptible to the darkness contained within the tablet causing him to betray Sam and Dean. He is driven insane by the tablet because he has no soul to filter out the darkness. I’ll confess I had forgotten that Donatello had his soul devoured by Amara considering how long ago it happened so kudos to the writers for bringing back that detail and making good use of it.

Dean and Castiel are sent on a Wild Goose Chase to retrieve the hearts of Gog (Michael Jonsson) and Magog (Andre Tricoteux); two ancient beings apparently formed of rocks and sand. This means that they have no hearts and they are killed by Dean for no reason at all. Despite the fact that this scene is literally a waste of time it’s a lot of fun to watch with some amusing brotherly banter from Gog and Magog along with a brief yet entertaining action beat to keep the episode from becoming stale. Sometimes a pointless diversion in story terms can really liven up an episode. 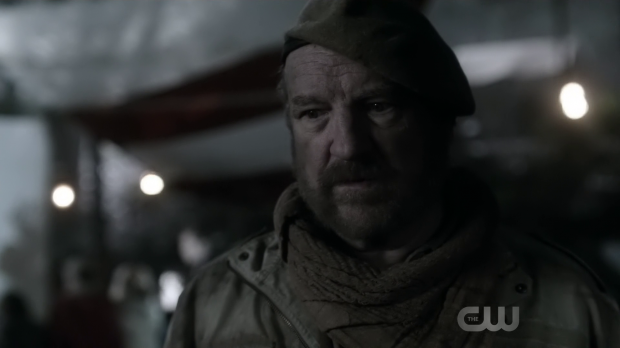 Castiel has some really intense emotional issues in this episode. Considering everything he has been through it’s about time he was able to talk about it in an attempt to process it and thankfully Dean is the sounding board for that. Cas feels that he must have been brought back for a reason and feels guilty that he isn’t doing more to help Jack after promising his mother that he would do everything he could to protect him. Dean assures Cas that he’s doing everything he can and has to be patient but it’s not enough for Cas as he really needs things to move forward more quickly. He takes it upon himself to extract the information from Donatello which has the unfortunate consequence of leaving him braindead.

Cas did honour Sam and Dean’s plea not to kill him but it’s hard to see how the alternative is any better. Points are made about Donatello being too far gone to save and earlier in the episode Cas suggested that killing him might be merciful at this stage but either way he managed to get the information they need which means that they are no longer wasting time deliberating what to do. The ends may not justify the means but at least now there is a plan that can be followed. Cas sees this as a War and has taken necessary action for a soldier which comes across as incredibly cold yet lives in that delightful moral grey area that hints at the possibility of Cas’ obsession with protecting Jack becoming a problem in the future. 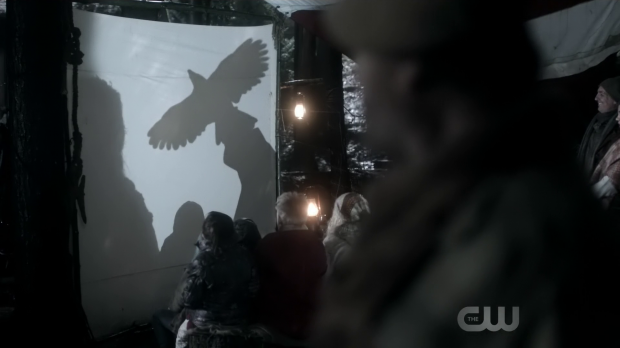 Another excellent outing that offers great character interactions and moves the main plot of the season forward. Mary and Jack have an engaging dynamic that isn’t used to its fullest potential because of the need to propel the plot forward but there’s no denying that their interactions make for compelling viewing. Mary meeting the Bobby belonging to the alternate Earth works really well as they both know different versions of the other meaning there is familiarity yet uncertainty. They gradually become more comfortable with one another until the trust Mary puts in Bobby backfires thanks to his mistrust of anything Angel. This softens somewhat once Jack saves them but there’s still a tension there.

The complications involving Donatello’s betrayal are interesting as well and make good use of the plot point involving Donatello’s missing soul. This allows for a fun yet pointless action sequence and adds complexity to Castiel’s morality when he makes the decision to forcibly extract the necessary information leaving Donatello brain-dead. It’s very cold from Castiel and lives in a moral grey area with the potential for Cas’ obsession with protecting Jack to present a problem in the coming episodes.