Supernatural develops the relationship between the Winchesters and the British Men of Letters with an old fashioned Werewolf hunt.

As I’ve said before, this show has been on the air so long that there is a typical formula associated with the monster hunts. It’s at the point where a lot of the establishing framework can be ditched in favour of focusing on a slightly different angle. This episode is a good example of this where the typical monster hunt is the least important part as it works in service of developing the supporting characters. 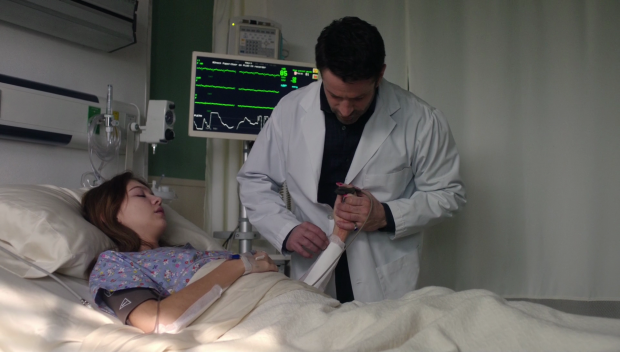 Mick is an interesting character because he’s so different from Sam and Dean. Mr. Ketch clearly has a lot in common with Dean and enjoys getting his hands dirty but Mick is largely theoretical in his approach and very much takes on the role of an administrator. He typically does his part but keeps his distance because it’s safer. Up until now this has worked for him but his encounter with the Alpha Vampire made the danger of what he does a little too real.

After this he basically has two choices. He could position himself further away or try to learn how to handle himself if things go out of control. Mick’s choice is the latter and he decides that there are no better people to learn from than Sam and Dean. At the very least he will feel safe in the field with them considering all they have survived.

As you would expect Sam and Dean are on different sides of this argument. Sam is all about making a go of things with the British Men of Letter and sees Mick working with them directly as an opportunity to streamline their working relationship. Dean sees Mick as a liability and makes Sam responsible for him. Of course Dean wouldn’t sit by and watch him be slaughtered but his impulsive reaction is in keeping with his personality.

Sam’s attitude about working with the British Men of Letters is broadly a positive one. He sees it as a way for him to protect more people using their vast resources so wants to make the best of it. Dean still doesn’t trust them but is going along with it because he trusts Sam. It’s a really tense dynamic but it’s good that Dean is keeping an open mind about the situation. 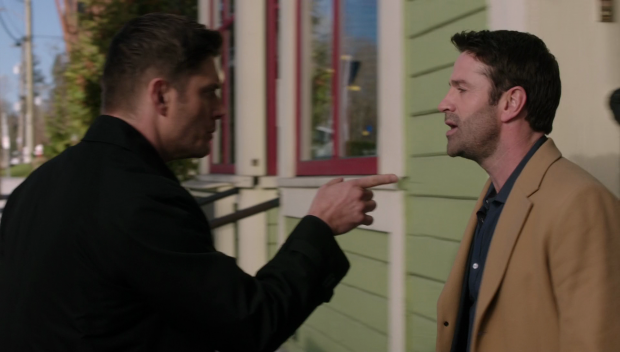 Dean gives Mick a lesson in the real world!

It is established early on that Mick’s experience is purely theoretical and he looks at things with a really detached outlook. This is especially shown when he discovers that Hayden (Abby Ross) has been bitten by a Werewolf so will inevitably become one. It’s a textbook response that he gives no lateral thought to. According to what he has read those bitten by Werewolves must be killed because all Werewolves are dangerous animals that need to be put down.

Sam and Dean’s practical experience has taught them that the real world is more complex than that. They are aware that it’s not as simple as a monster being evil as they have encountered various examples of that not being the case so they have an open mind about these things. Being a Werewolf could essentially be considered an illness that just has to be lived with. There’s a requirement to be locked up a few nights a month but other than that a fairly normal life could be had. Mick doesn’t see it that way and kills Hayden.

His outlook changes when Claire Novak is bitten and risks becoming a Werewolf. Since he has a history with her killing her isn’t quite so easy and the practical morality of being a Hunter starts to become apparent to him. Mick has a lot of potential to develop as he is becoming exposed to different aspects of being a Hunter and learning how complicated the situation is for those out there doing the fighting.

It turns out that the British Men of Letters have an experimental cure for being a Werewolf that comes with the usual risks associated with experimental cures. Claire Novak is a good case study for this as her status as a recurring character makes her expendable even if it would be harsh for her to be killed off considering how young she is. The cure does work and with it comes a lesson in the real world for Mick. 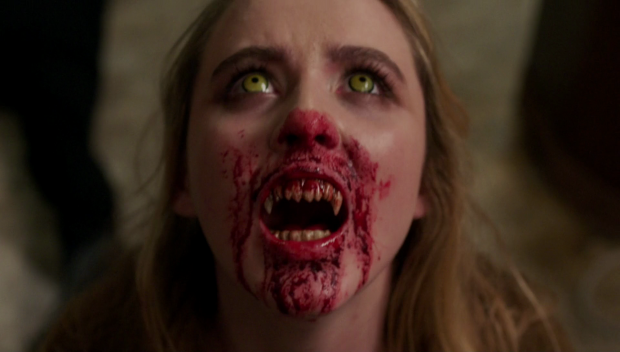 I’m wondering if this is building to a similar argument when Lucifer’s child is born. There are a lot of parties who want to get rid of the child before it becomes a problem and Mick’s new way of thinking could play into this. I’d like to see some kind of debate over whether Lucifer’s child should be given the chance to exist and make its own choices and it’d be good to see Mick defending its right to life in order to show a change in him through his experiences with Sam and Dean. Mr. Ketch would obviously be on the opposite side of that argument creating tension within the British Men of Letters.

Claire is an enjoyable presence in this episode and her involvement mixes up the standard formula. Having her go in to ask young people questions because it might be creepy for Sam to go into a school to question teenagers is a nice touch and the episode doesn’t need to show the questions in order to get the point across that the interviews have been done. As I said before there have been more than enough episodes of this show to properly fill in those blanks.

Having the character around without Castiel lets her branch out a little and I was impressed by her skills as a Hunter. The development of her living situation situation with Jody felt significant without taking over the episode. It makes sense that she would be feeling claustrophobic in that house given the varied dynamic that exists there and it’s consistent with her character to want to run away from that. The fact that she lies about it is obviously not the preferred way to go about that but this pays off with a moving phone call where she outlines the truth about what she needs and how she feels. Calling Jody “Mother” shows just how comfortable she feels and what she’s doing is nothing against her. I look forward to seeing Claire again as she is a lot of fun when bouncing off Sam and Dean.

The main issue I had with the episode is how dull the actual Hunting plot was. It was really easy to predict who the Werewolf attacker was and he was fairly dull as villains go. All of the side parts of the story were interesting enough but the episode loses momentum when the writers don’t manage to make the main threat something worth investing in. 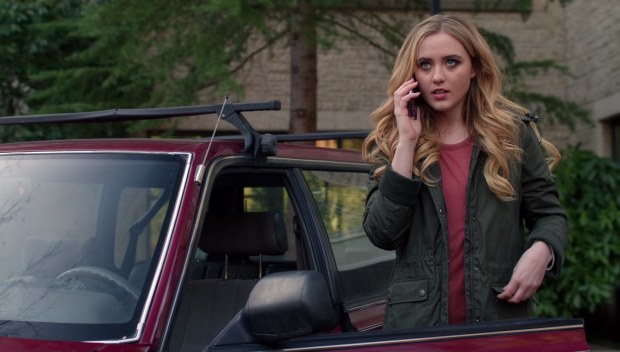 A solid episode that develops the Men of Letters plot nicely. Mick being faced with the reality of being out in the field and having that colour the assumptions he has made based on his theoretical learning was a nice touch. Seeing him casually kill a young woman bitten by a Werewolf was definitely cold and contrasting that with his more open mind where Claire Novak was concerned worked really well. The development of the grey area in Mick’s eyes could tie into the plot of Lucifer’s baby when it comes to the time to decide whether it has the right to life or not.

Claire Novak was a fun presence and is clearly growing in her skills as a Hunter. She bounces off Sam and Dean really well and it’s good to see how she behaves without Castiel around. Having her run away from Jody makes a lot of sense given her established character but the fact that she lies about it is something to overcome. This pays off with a moving and honest phone conversation where she outlines what she needs and how she feels. Calling Jody “Mother” shows just how far she has come and how deep that connection now is.