Supernatural returns from a very long hiatus with a light hearted episode to ease viewers back in after such a long absence.

It’s been a long time since new Supernatural was on the air and an even longer time since I last reviewed it. Life circumstances got in the way of me keeping up with the final season reviews but I’ll be doing everything I can to make sure I cover the final run of episodes because I’ve had a long relationship with this show and really want to do the coverage. 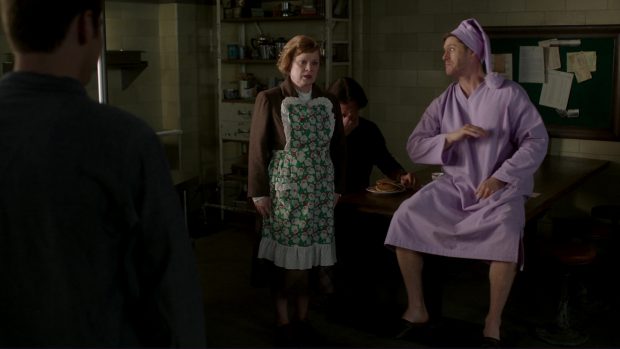 It’s good to be looked after

Every season of this show has episodes that could appear almost anywhere as they hit pause on whatever the ongoing season arc is to tell a self contained stand-alone story that makes passing references to the larger story as a reminder that it’s still a concern but doesn’t cover it in depth. This is such an episode with a largely Bunker set story that allows Sam and Dean to have some fun before the intensity undoubtedly ramps up.

The story involves the discovery of a Wood Nymph who goes by Mrs. Butters (Meagen Fay); an entity that had been put in stasis within the Bunker until Dean sets her free. At first her discovery looks to be a very happy accident as her magic massively upgrades their operation to make their hunts easy and efficient, she cooks lavish meals while also cooking and cleaning for them. Sam and Dean have effectively inherited a full service maid along the lines of Mary Poppins and it quickly has a positive impact on their lives. Of course with it being Supernatural when something appears too good to be true it almost certainly is but the bulk of the episode focuses on how their lives are enriched by such a presence.

Sam and Dean are far from the best at taking care of their own well-being as they are so often focused on surviving one crisis so that they can get to the next. This takes a toll on them as is frequently demonstrated though Sam has a greater awareness of this and at least tries to make sure that they take some time to remember that their own mental health is important. Dean is far less capable of considering that and is directly called out on this by Sam who points out that ignoring trauma doesn’t make him healthy. This is something Dean gleefully denies though on some level he will know this but doesn’t consider it a priority when there’s a world to save. I’ve always enjoyed this dynamic and the intermittent returns to the Winchesters reminding one another that they’ve been through more than anyone can reasonably be expected to process. They carry a lot of responsibility on their shoulders and there have been several breaking points throughout the run of the show yet they somehow manage to keep going and continually weather everything that works against them. 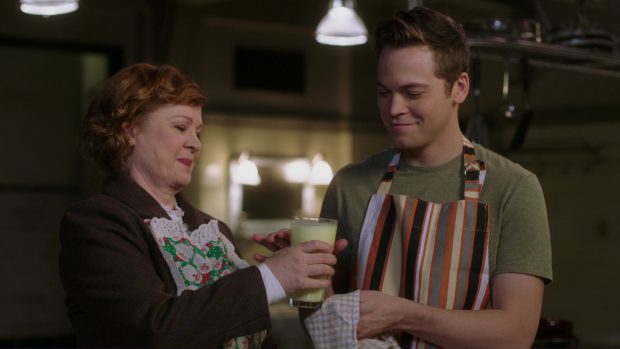 Not suspicious at all

Compartmentalisation seems to be the key and taking opportunities to find some joy in their lives however fleeting has consistently kept them going. This final season has them facing up against God which will create unimaginable stress but basking in slight victories and taking advantage of the brief lulls in that conflict works wonders. Mrs. Butters provides that by taking all of the day to day concerns away from them. They don’t have to worry about food because a masterfully prepared home cooked meal is waiting for them when they return from a hunt, their clothes are cleaned for them, hunts are fed to them through their upgraded system meaning they don’t have to worry about research and there is a constant supportive presence there to make them feel valued. They are being rewarded for their efforts with more than continued survival and judging by the way both brothers react to this it’s exactly what they needed.

Sam and Dean both act in keeping with their established characters. Dean is especially keen to embrace Mrs. Butters because what she has to offer is something he is really interested in. This is consistent with his need for a maternal figure in his life after being old enough to remember when that was taken away from him. His quick acceptance of Mrs. Butters shows that she answers the need he has for some sort of maternal connection and the change in his attitude to less burdened and more optimistic shows the benefit having that presence in his life has on him. Jensen Ackles always does a great job playing a more light hearted Dean with his perfect comic timing and infectious cherubic grin. It’s great to see and plays into the episode’s well-being theme perfectly. Dean’s reaction to learning that she’s a threat being a mixture of disappointment and a complete lack of surprised was very on brand as well.

As expected, Sam is a lot more cautious and is constantly looking for flaws early on because they have been burned by potentially good things before. Mrs. Butters manages to wear even him down but he never entirely loses this cautious edge. Sam has never had the same reliance on family and doesn’t remember the childhood maternal connection so isn’t as quick to embrace the possibility of having that. Once again, the characterisation is consistent and fits in perfectly with what the episode is trying to achieve. Despite his concerns, Mrs. Butters does have a positive impact on Sam who does find the bandwidth to deal with his own emotional well-being. The most prominent example of this is his nervous excitement surrounding his date with Eileen. It’s the closest thing to normality he’s had in a long time and his mindset radically shifts to what would be common in that situation. The display of reclaimed humanity in both Sam and Dean in this episode works wonderfully. 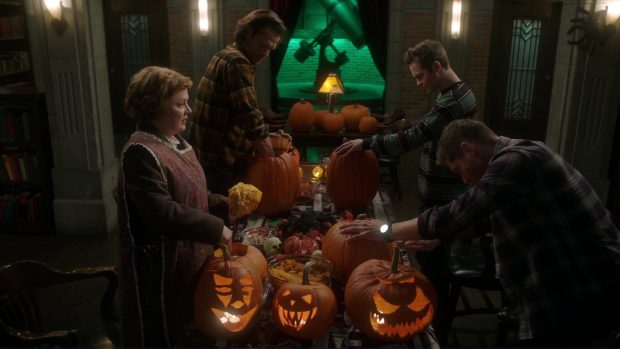 Mrs. Butters is an endlessly fun presence who never fails to engage throughout. Meagan Fay plays the prim and proper nanny figure to perfection and excels in adopting the sinister edge when the episode inevitably calls for it. The subtle hints to that inevitability layered in her performance throughout the episode build gradually and her interactions with Jack have the appropriate depth to them. There’s always something to be wary of in terms of how she conducts herself but she’s so charmingly saccharine that any oddities in her behaviour can be quickly dismissed. The episode deftly avoids the tiresome dynamic of one person seeing through her and the others being oblivious to it because Sam and Dean realise the truth before there’s a chance for that to play out.

One really striking thing about Mrs. Butters is that she isn’t an antagonist in the traditional sense as she is driven by her own personal morality and the conclusions she draws from that. She sees Jack as a threat because of what he is and the backstory reveal of the fact she was brainwashed by the Men of Letters into thinking the same way they do about monsters while ignoring the fact that she more than qualifies herself enhanced that greatly. When the time came for her to be a threat she was a believable one and having her stopped by appealing to her better nature rather than the standard violently lethal methods was a refreshing change. It also perfectly linked in with the theme of well-being in that the solution was created by the Winchesters being reacquainted with their humanity.

The return of Jack’s soul feeds into the episode nicely with him largely isolated early on processing everything that he has recently done through the lens of having a soul and being able to feel the guilt, regret and self loathing that comes with those actions. There is a lot of familial imagery in the episode with the characters enjoying long delayed landmark holidays like Christmas and Halloween with Jack tying into this by reaffirming the connection he has to Sam and Dean. The scene where he opens up to Dean about how torn up he is over killing Mary is beautifully performed by Alexander Calvert and Dean’s honest response detailing his desire to forgive being opposed by the personal difficulty he has doing that makes for a really complex problem. Dean’s rationality is in conflict with his emotions as he understands on an intellectual level the circumstances around what Jack did but still sees the man who killed his mother when he looks at her. Mrs. Butters does go a long way towards helping him accept that and the gesture in the form of the hilariously terrible looking cake was a perfect resolution to that internal conflict. It doesn’t resolve Dean’s feelings entirely but it shows he’s willing to work on them so that he can get there. The cake was made with love and that’s ultimately what matters. It also acts as something of a metaphor for Dean who is also somewhat broken but functions where it really counts.

Referencing the ongoing season arc is where the episode falters slightly. The references were less than sophisticated with the telescope/Interdimensional Geoscope acting as a painfully obvious piece of foreshadowing, These instances were rare but felt really awkwardly forced in when they appeared. It’s such a minor issue that doesn’t detract from a really fun episode that was a near perfect way to ease into the return of Supernatural for its last ever run of episodes. 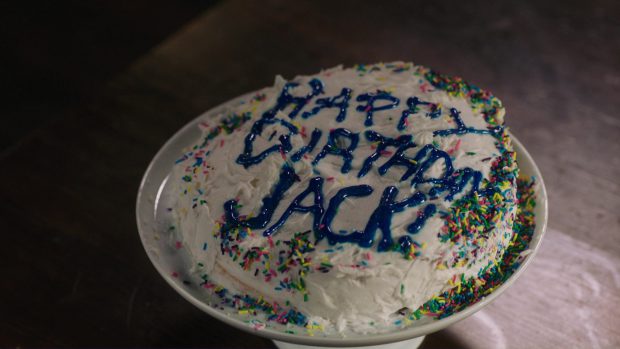 Made with love and that’s what counts

A really fun episode that made great use of the comedic chops of the actors to deliver a light hearted and wholesome viewing experience. Mrs. Butters proved to be a really engaging character who believably sent Sam and Dean down a path to reclaiming their humanity and enhancing their own well-being. Both Sam and Dean played nicely into their established characters with Dean being more open to accepting this new maternal figure in their lives and Sam being cautious throughout. Meagan Fay’s performance is excellent as the prim and proper nanny figure with a sinister edge that presents periodically. When it comes time for her to be a threat she’s a believable one and appealing to her better nature to defeat her is a refreshing change of pace while also tying into the theme of well-being that the episode is exploring.

The return of Jack’s soul factors nicely into the episode with him being isolated as he processes everything he did when he didn’t have a soul. His interaction with Dean where he opens up about how torn up he is over killing Mary is beautifully played and Dean’s complex reaction highlighting the conflict between his rational understanding and his feelings was a really nice touch. Mrs. Butters does greatly help in the repair of this family dynamic and Dean baking Jack a hilariously terrible looking cake was an appropriate resolution that shows his willingness to work on it. The only issue the episode had was the less than sophisticated references to the ongoing arc but it’s a minor niggle in what was otherwise a near perfect way to ease into the return of Supernatural for its last ever run of episodes.