Supernatural wraps up its 2016 run with a trip to the White House when Lucifer possesses none other than the President of the United States.

In the Supernatural universe the president is a man named Jefferson Rooney (David Chisum) and we don’t learn much more about him than his name. We do find out that he’s a widower and that he’s having an illicit affair with one of his employees. 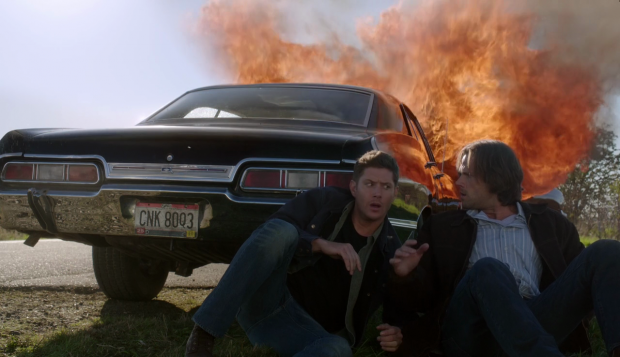 David Chisum was sort of a non entity as Lucifer. He wasn’t bad but he wasn’t especially good either. We don’t really see any of the mannerisms that make Lucifer so distinct as a character and Chisum doesn’t seem to be in any hurry to put his own stamp on the role either. Rick Springfield was new but still identifiably Lucifer but Chisum seems to sleepwalk through the role.

Last week established that Lucifer wants to be worshipped and this is continued here when Crowley mentions that he is targetting specifically powerful people to be his vessels. It’s almost as if he is punishing the rich and powerful by inhabiting their bodies and tearing them apart from the inside. Does her envy them? Hate them? Or is he simply bored? It’s hard to guess at this point since nothing has really been done to explain his reasons for doing anything at this point. He simply does something that Sam and Dean have to react to but it doesn’t go any deeper than that.

His possession of the President is a prime example of that. What better person to inhabit than the most powerful man in America? Arguably he isn’t really worshipped in the same way a rock star would be but the resources he has at his disposal are significant and Lucifer could do a lot of damage if he really wanted to. All it would have taken to make this worthwhile is a quick explanation that he wanted to deal as much death and destruction to the human race as possible because it would annoy God. It’s immature and attention seeking but it would definitely fit with Lucifer’s personality and would make the situation far more urgent to boot.

This episode wasn’t free of tension or urgency though. There was actually quite a lot of it in the early scenes. Lucifer talking to the President while in his body was a really tense moment that seemed like he had big plans that involved everyone believing that nothing had changed. The suggestion that Lucifer actually had a plan did a lot to move things along. 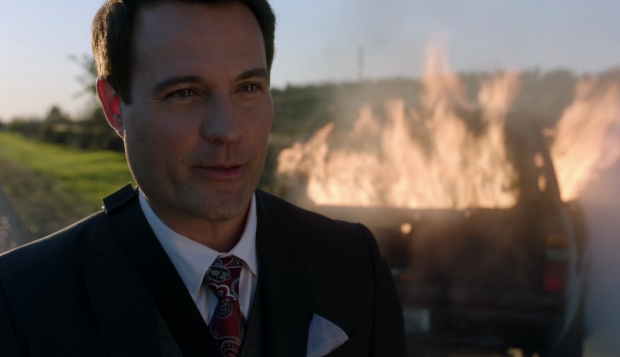 Unfortunately, the idea was the strongest thing about it as Lucifer didn’t really have a plan at all and seemed almost bored with being the President very quickly. Maybe the reality of having to attend endless meetings was something that he wasn’t prepared for but I was surprised how quickly the episode went from being tense and full of possibilities to relatively dull once it became clear that Lucifer wasn’t really planning to do anything.

Continuing the President’s affair with Kelly (Courtney Ford) proved to be the most interesting thing about the episode as he fathered a child in the process. The prospect of the son or daughter of the Devil is interesting enough on its own because it carries immediate weight since we know how powerful Lucifer is and how corrupting his influence can be. Lucifer’s child would surely be a very powerful being that could prove to be a huge problem if Lucifer has anything to do with it.

It is treated as something that has weight as well as shown by Castiel’s reaction to it. He sees it as an event of huge importance and something that should truly be feared. It restores a lot of the tension that had left by that point and brings in a new angle for the show to explore. It looks like the spawn of Satan will be a major arc for the rest of the season but I’m not quite sure how interesting it can really be until the baby is born.

Even though Castiel restored some of the tension to the episode with his reaction it isn’t long before it disappears again. Lucifer didn’t plan to impregnate a human which has merit in itself as the accident could end up informing how he acts next but it doesn’t really play out in an interesting way after that point. Other than doing a double take when he realises that he has actually created something Lucifer’s reaction is somewhat underwhelming. The knowledge that he had created something could have moved him in some way by helping him see his father in another light but that doesn’t really come across here. It might later in the season but it’s a major missed opportunity here. 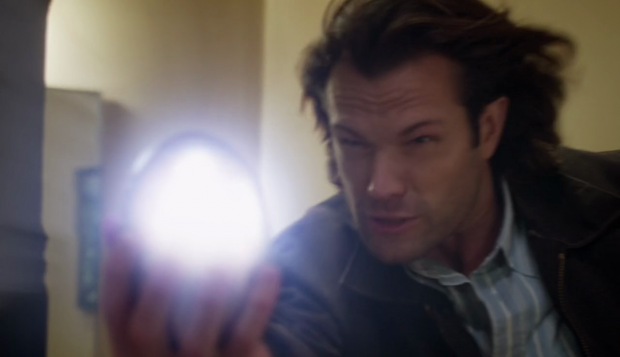 Sam shows Lucifer what he could have had

Kelly is an interesting character so far as she is clearly very overwhelmed by everything. Her affection for the President feels warm and genuine to the point that she comes across as an unfortunate victim in this situation. She was essentially impregnated by a stranger almost against her will which does have violation connotations. The episode doesn’t play it that was as it’s more complicated due to her believing that Lucifer is actually the man she loves but they are definitely there and it makes the situation as well as Lucifer appropriately disturbing.

The fact that Kelly comes around to the idea of having Lucifer’s child is also disturbing but makes sense at the same time. It could be maternal instincts stopping her from aborting a child that isn’t responsible for where it came from or it could be some kind of angelic influence. She can already feel it so has a connection to it in that way. If Kelly becomes a recurring character driven more insane by her desire to have Lucifer’s child then it could be very interesting.

Lucifer does use his Presidential influence in some way when he arranges for Sam and Dean to be taken care of but it doesn’t really come to anything exciting other than a small engagement. There have been interesting stories in the past where Sam and Dean have been up against legitimate authorities who don’t understand what is really going on so this could have been good but only served to introduce British Men of Letters operative, Mr. Ketch (David Haydn-Jones).

In fairness, Mr. Ketch does have an awesome intro where he uses a grenade launcher to rescue Sam and Dean. The ensuing conversation is interesting as well as it identifies the mistake in the approach taken earlier in the season. He seems committed to working with them and supplying weapons that can help make hunting a little easier. It seems like the writers are going down the route of an uneasy alliance more than outright antagonists and that’s definitely a good thing since it adds complexity. 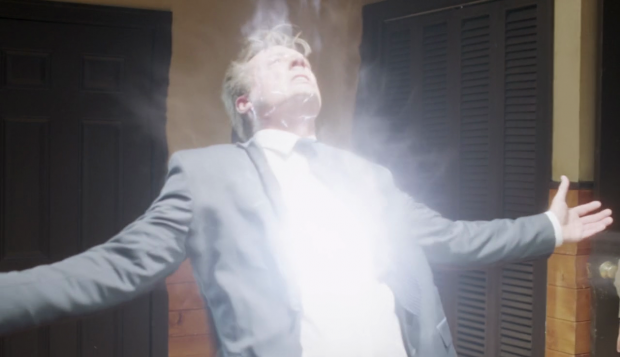 The Exorcism Egg was a cool weapon and the sequence where it was combined with Rowena to force Lucifer to depart his vessel was a really exciting one. It was especially enhanced by the fact that Sam was the one to do it as it really stings Lucifer to be put back in his place by the only vessel he really wants. It’s unclear what happened to him after being exorcised but I imagine he’ll be back especially with his child on the board.

I found the events after the Exorcism to be really confusing as there seemed to be a lot of convenience to get the plot in a place that would create a cliffhanger. Sam and Dean not escaping with Castiel and Kelly made absolutely no sense. Ketch told Castiel to erase the memories of the agents sent after Sam and Dean earlier in the episode so it was apparent that he could do the same here and there was no reason for Sam and Dean to stick around other than to get arrested.

Another confusing thing was Kelly managing to sneak away from Castiel when he thinks she’s in the bathroom. Castiel would be one to keep a very close eye on her so this is definitely narrative convenience. I imagine she will fade into the background until it’s time to give birth.

I wonder if the rules that have been set out by the show are largely being ignored. Lucifer seems to be able to hop from vessel to vessel without much trouble but we have seen him take his time to wear someone down before taking possession of their body. Obviously this could be happening off screen but I can’t imagine what he can say to the most powerful people in the world to make them that compliant. The president is established as mourning his dead wife but was there really time to wear him down to that degree? A lot of the nuance to Lucifer’s menace has definitely been lost but we’ll see if it can be regained in January. 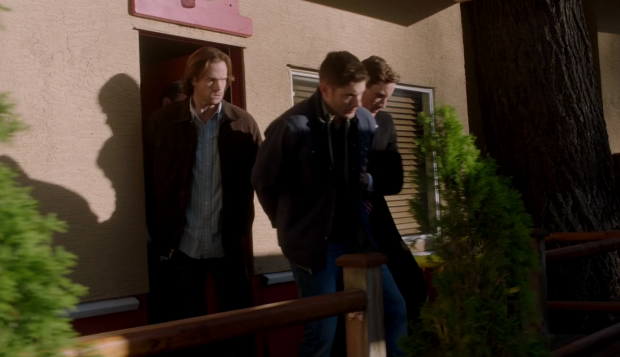 A better episode than last week but still a very uneven experience. Lucifer possessing the President of the United States should have been a really interesting story but the fact that he didn’t actually do anything made it feel less than worthwhile. The story of him having a child does have a lot of potential though and plays out well enough from Kelly’s perspective.

The introduction of Mr. Ketch was effective and the deepening of this story to make the British Men of Letter reluctant allies of Sam and Dean is a better move. Having him supply the Exorcism Egg to help get Lucifer to leave the President was a good idea and the scene itself was well handled with Sam being the one to banish him. Hopefully things will pick up in January and Lucifer’s child will prove to be a worthwhile story.