Supernatural brings back a character not seen since the first season when something evil starts picking off psychics.

This episode features fan service even the most die hard of fans might have trouble remembering. Missouri Moseley (Loretta Devine) has only had one appearance since the show began and that was all the way back in its first season. She previously appeared in the episode “Home” and presented the appearance of someone who could easily have become a major recurring character. Unfortunately she didn’t and she returns here. 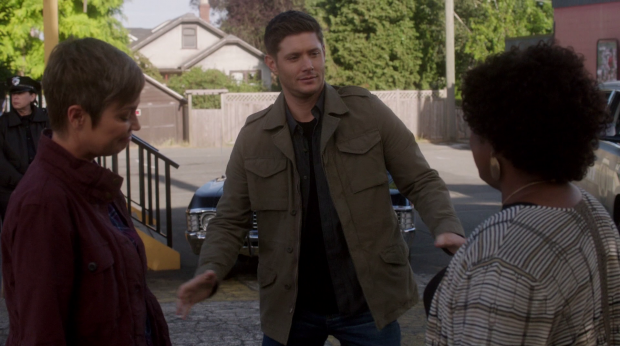 A blast from the past

Missouri calls Sam to ask for help after one of her friends is killed by less than natural forces. The first thing that stands out to me is the fact that she still has Sam’s number after all these years. The brothers have had countless phones and phone numbers out of necessity so it’s amazing that Missouri managed to get a hold of him at all. Of course they might be updating their details with favoured contacts off screen but I found this striking.

Sam’s reaction to the call is to ask Jody to deal with it as be believes that their time is best spent with Jack. Dean completely disagrees with this assessment as he doesn’t like being around Jack. Dean is in really bad shape at the moment as evidenced by him locking himself in his room and drinking to excess. Not to mention his generally pessimistic mood. So far this season Dean is a man unable to process his grief and Jack represents everything he’s lost so he can’t bear to be around him.

I like it when an episode separates Sam and Dean as it’s a bit of a break from the norm that gives each character a distinct story that allows them to grow independent of each other. Repeated storytelling of any kind can get stale so it allows for a welcome diversion from the typical structure.

Dean and Jody team up which is always a welcome pairing as Jody is able to challenge Dean in ways that Sam doesn’t. She’s straight talking yet sympathetic an sees things in a very maternal light which becomes instrumental in this episode. 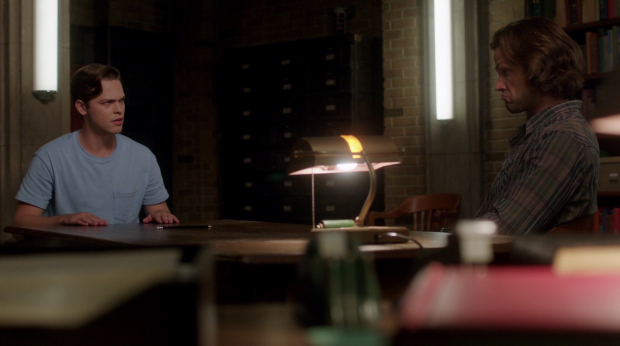 I really enjoyed the scene where Dean reunited with both Jody and Missouri. His dilemma over who to hug first being solved by Jody allowing Missouri the first embrace was a really nice touch as it shows her empathy and her acceptance of the history Dean shares with Missouri. It could be argued that it’s just a hug but it’s a very small example of self sacrifice on Jody’s part which is very consistent with how she has been established.

Sadly the reunion is short lived and Missouri is killed by the Wraith (Jon Cor) inspiring Dean to do everything he can to avenge her with the help of Jody. It’s a shame to see Missouri killed off continuing the disturbing trend of Supernatural bringing back characters from Sam and Dean’s past only to have them killed off. There must only be a handful of recurring characters left and I wonder if the writers will get around to offing whoever is left before long.

This episode works to give Missouri a bit of background by introducing her son James (Adrian Holmes) and granddaughter Patience (Clark Backo). It is quickly established that Missouri and James do not have a close relationship. James assumed that her psychic powers were fraudulent and cut her out of his life for her apparent negligence as a mother as a result of her gift. It’s fairly flimsy and the episode does little to justify this in any meaningful way. James’ reasoning just seems petty and telling his daughter that her grandmother didn’t love her is a really mean spirited thing to do. There’s no justifiable reason for this cruelty and it does little to endear the James character. The worst part is that the episode tries to frame him as a sympathetic character mourning the loss of his mother when nothing about him deserves the audience sympathy.

Not only that but he denied his daughter the opportunity to spend time with a woman who could help her understand her powers rather than be concerned that she’s going insane when they manifest. The whole setup of the James character is problematic and drags the episode down.

Patience is a great character. Clark Backo delivers an engaging performance and brings across a wide range of emotions. The fear she experiences when having visions and witnessing those she cares about die comes across really well and the general confusion she has about her for the majority of the episode manages to not feel overblown. She also interacts with the cast well and shows definite potential for a return in the future. 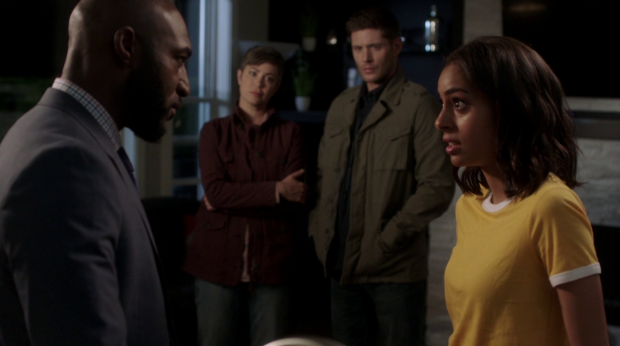 Patience has a clear arc in the episode revolving around accepting her powers. At first she’s afraid of them because she doesn’t understand how they work and by the end of the episode she starts to realise how useful they can be and cherishes the fact that they represent a connection to her grandmother. There are undercurrents of a touching story there and it’s a shame that she didn’t get to interact with Missouri more than she did.

A running theme in this season so far is grief. It has played into every episode in one way or another usually through Dean and Patience plays into that after losing her grandmother. Dean offers her the advice to forget about her ability and live a normal life because there is no joy to be had in hunting. This further shows how broken Dean is at this point in time and that he needs to find a way to move forward. So far he hasn’t found any way to get closure on his recent losses and it’s clearly eating him up inside.

Jody has the opposite advice for Patience and tells her to do whatever feels right for her rather than listening to people telling her to reject what she really is. This is echoed in Kelly’s video message to Jack. It is made clear that Patience should decide how to live her own life and not necessarily take Jody’s advice if she doesn’t want to. This shows that Jody has learned from the mistake she made with Claire by trying to make her forget what came naturally to her. Now she is more willing to help people embrace their natural tendencies.

Patience as a character offers up an interesting contrast to Jack. She embraces her ability to positive effect but Jack goes out of his way to reject it. The plot he shares with Sam doesn’t have enough screen time to be as compelling as it really should be but there are some interesting aspects of it. 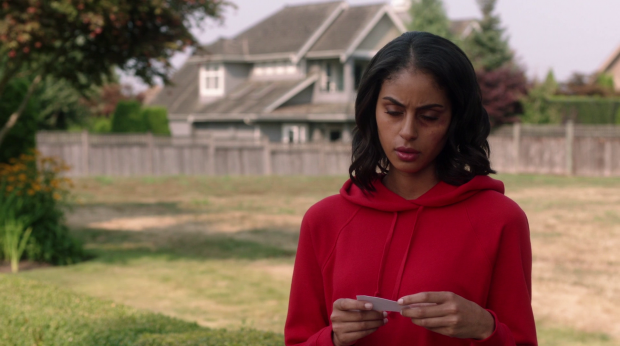 Patience considers what she wants to be

The Wraith was fine as villains go. Jon Cor was menacing enough and the ever present threat helped the episode retain some momentum. He does well enough in the physical confrontation with Dean and generally does a good job in his scenes though there’s very little there to latch onto. His motivation was that he developed a taste for psychics so hunted them down. Sometimes there doesn’t need to be any more than that and it allowed for the other characters to be developed without worrying about complex villain motivations at the same time.

Sam working with Jack to control his powers makes the most sense as Sam knows what it’s like to have a power inside him that he doesn’t understand. He starts small by asking Jack to move a pencil but it is met with no success. The reason for this is that Jack is afraid of his own potential. The only times he has been able to use his power is when he was compelled by Evil or driven by Evil impulses. His conclusion is that he must be evil because his powers don’t activate for good reasons. Jack is genuinely torn up by the fact that nothing he has done since his birth has done anyone any good. Alexander Calvert delivers another excellent performance. He plays Jack with such purity and vulnerability that it’s easily believable that he is capable of being a good person. I suspect he will continue to be tempted by Evil but will ultimately prove himself to be a force for good.

Sam’s response is to assure him that he isn’t Evil and he understands why Jack feels the way he does since he has dealt with power rooted in darkness and understands the fear and uncertainty that comes with it. He sees good in Jack and doesn’t want him to think badly of himself even though Dean can barely look at him because he sees the spawn of Lucifer and nothing else. Sam continues to use himself as an example of why potential for Evil doesn’t automatically result in Evil but Dean is so torn up by his own grief that he can’t think straight. For now it’s interesting to see Sam and Dean on different sides of the argument but it can’t go on forever.

There is a hint that Jack uses his powers for good at the end of the episode when his eyes change and he says “Castiel” followed by Cas being shown alive -or some variation of it- in an empty black space. It’s up for debate whether Jack is simply contacting him or has somehow resurrected him. 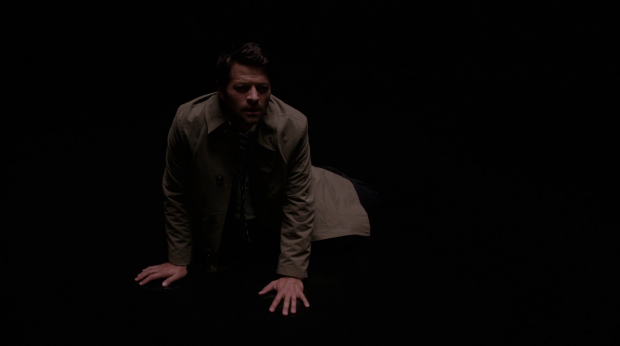 A solid episode with some bizarre choices in the characterisation. It was good to see Missouri brought back after so long but killing her off so quickly was something of a misstep especially considering the potential to have her interact with her granddaughter. The estranged relationship Missouri had with her son James was really confusing as well as his reasoning for cutting her out of his life was bizarre especially considering the lies he told to Patience. It’s not acceptable behaviour and prevents the character from being sympathetic. Jody’s presence is always welcomed and I like that she has developed to the point where she inspires people to be themselves rather than act differently to survive. I also like that Dean is going through the motions and clearly a broken man who needs to achieve some form of closure.

Patience is a good character and has plenty of potential to show up in the future. She offers a natural contrast to Jack as she embraces her powers and is able to use them for good where Jack rejects his because he feels that his powers are only triggered by Evil and points out that all he has done is hurt people since he was born even if it’s accidental. Sam relates to him because he has been through something similar. The nature vs. nurture debate rages on but there’s a strong sense that Jack wants to be good and the closing moments of the episode hint that he can use his powers for good though it remains to be seen what actually happens there.