Supernatural picks up the pieces from the devastation at the end of the previous episode and explores the consequences for the characters.

Last week ended with both death and rebirth. Maggie and the other Hunters were brutally killed at the hands of Michael just before Jack killed him and regained his own powers. This episode deals with the consequences of what Jack had to do in order to beat Michael. Until having his powers restored his only source of power was his soul which would be burned of every time he draws on it. There is an open question around how much soul Jack had to sacrifice in order to beat Michael. Sam, Dean and Castiel are understandably concerned so Dean is tasked with finding out how much damage is done. 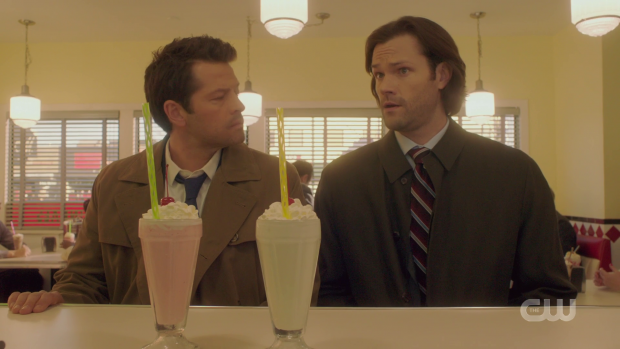 This is just weird

Jack’s general demeanour seems fine if a little distant and he has gained an obsession with Noah’s snake and solving the problem of it not wanting to eat anything. The snake will come to represent Jack’s innocence and the potential loss of that. His persistent efforts to get the snake to eat something act as a metaphor for the emptiness Jack feels and his need to feel that he’s accomplishing something. It’s consistently applied throughout the episode and works really well as a representation of the consequences of Jack’s action.

In order to assess Jack’s current status Dean takes him to see Donatello who has been living without a soul for a while so understands exactly how to deal with it. Amusingly he also tests Jack on the way by giving him a choice between an Angel or Devil snack food cake as if his choice is somehow a gauge of his allegiance to good or evil. He chooses the Angel option which pleases Dean but is hardly conclusive.

Donatello’s conversation with Jack is both eerie and informative in terms of how he sees living without a soul. He likens it to a black hole at the centre of a galaxy. Everything good in his life is tainted by the emptiness within him due to the absence of a soul. The visual representation of this using the milk being stirred into the coffee adds to the overall atmosphere and applies extra weight to Donatello’s perspective. He talks about lacking a soul not making someone good or bad on its own. The absence of empathy as well as an innate understanding of right and wrong can lead people to do bad things because they don’t understand why they’re bad. 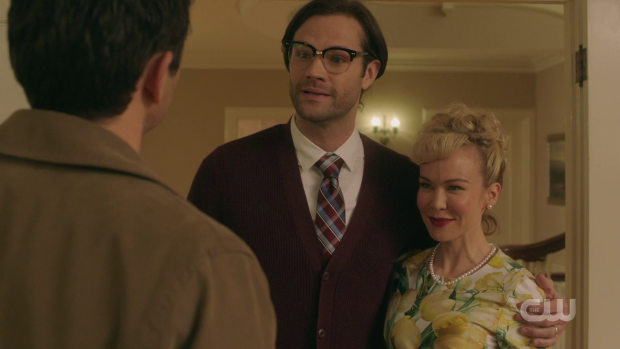 Oh no! They got Sam

Jack tells Donatello that he doesn’t feel the same kind of nothingness that is described to him but he also doesn’t feel the same as he did before so he’s unsure exactly what it is that’s going on with him at this point. He mainly doesn’t want Sam, Dean and Cas to worry about him and feels that he needs to figure out things on his own. Donatello gives Jack valuable advice on how to know what the right thing to do is and how not to make his family worry about him. He encourages Jack to think about what Sam and Dean would do in that situation and he’ll be given the right answer most of the time. It might not fix everything but it gives Jack something to focus on which seems to be enough for now. Donatello still has no idea if Jack has lost his soul or not but he tells Dean that he seems fine but it’s worth keeping an eye on him because he’s probably the most powerful being in the universe so if he suddenly loses sight of what’s right and wrong it could be very dangerous.

The connection between Jack and the snake is resolved when he tries to rid the snake of its sadness by allowing it to be reunited with its former owner through killing it. This could be seen as an interpretation of Donatello’s advice as Jack might think that Sam and Dean would rather end the snake’s suffering rather than let it carry on in this way. Also, reuniting it with its owner could be seen as a merciful act without the context that comes with valuing life so Jack’s naive understanding of the universe could lead him down a questionable path if it turns out that he doesn’t have a soul. The question is still open but the groundwork has been laid for Jack to potentially be a problem that needs to be solved and killing the snake suggests the death of Jack’s innocence. If he is being set up as a villain of sorts then this has a lot of potential due to the familial connection between Sam and Dean.

Michael murdering the group of Hunters that Sam has been in charge of has a profound effect on him. He apes Dean’s coping mechanism of throwing himself into his work with little regard for personal health. As such they have been on multiple consecutive hunts are are now exhausted so Dean begs Sam to take some time to get some rest. Sam refuses to do this because resting would mean having time to process everything that has happened and he doesn’t want to deal with the grief. It’s all fairly standard stuff that has been done many times before but it’s also consistent characterisation for both Sam and Dean so such behaviour is expected. In order to keep going Sam takes Cas with him to investigate a report of a man’s head exploding. This leads them to a scarily idyllic 1950s style town where everyone is insanely content and inhumanly polite to one another. Naturally this raises a few red flags and it bears further investigating. 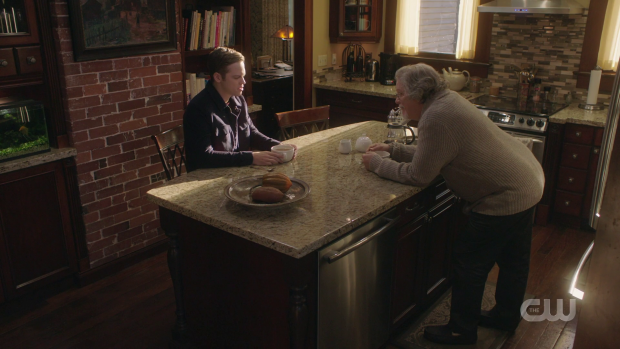 Advice for the soulless

There’s nothing overly exciting, memorable or original here but there is enjoyment to be had thanks to Castiel’s reaction to everything he sees. Misha Collins’ deadpan line delivery provokes a few laughs and the sickeningly saccharine characterisation of the inhabitants of the town is also amusing in its own right. Of course Sam ends up succumbing to the magic of the town and becomes a gleefully optimistic man named Justin. This is also entertaining as Jared Padalecki fully commits to the persona. In a way this is exactly what Sam wants as he points out later in the episode. When under that control he has no concerns, no negative experiences, no responsibility and, most importantly, no guilt. Of course this comes at the expense of his very identity but the fact that he sees merit in it shows how defeated he at this point.

The villain, Chip Harrington (Bill Dow) and his daughter Sunny (Caitlin Ashley-Thompson) are good as one shot antagonists go. Chip’s motivations actually make a lot of sense as an extreme reaction to caring about those in his town. He’s very much driven mad by the power he possesses and forces his vision of happiness on others but his intentions were at least benevolent. This would definitely have been something worth exploring as there’s a moral debate to be had here that would have even tied into Jack and Donatello not understanding the difference between right and wrong. Sunny is very much just along for the ride and is controlled by her father in a different way as she feels trapped by a promise to her dead mother to never leave him.but overcomes that when she fights back. The actors do a good job here and there is potential for Sunny to come back. 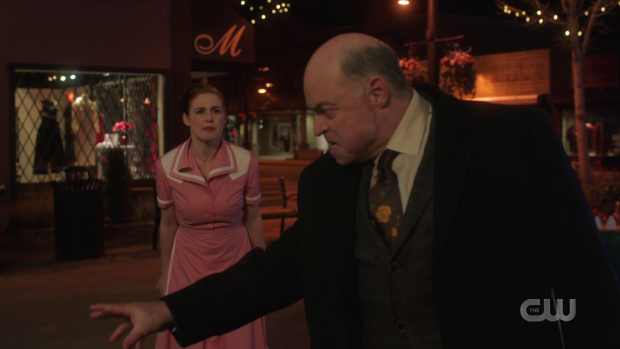 A reasonable episode that deals with an interesting open question relating to Jack and gives weight to the events of the previous episode through tangible consequences. The open question over whether Jack lost his soul defeating Michael isn’t explicitly answered. It is made clear that he is out of sorts but beyond that he has no idea if that means he feels emptiness. Dean takes him to see Donatello who explains his experience of being soulless and gives him advice on what would make a suitable barometer for right and wrong when the lack of a soul means that there is no empathy. It does seem to help until Jack casually kills the snake he has made a connection with because he thinks that it’s the best way to help it. It’s a concerning outlook and the death of the snake suggests the loss of innocence on Jack’s part based on the consistent metaphor for the emptiness Jack may be feeling.

Sam is making use of a typical Dean coping mechanism and throwing himself into Hunting so that he doesn’t have to process the grief that he’s feeling. Dean recognises this and encourages him to get some rest but Sam would rather keep going and enlists Cas to go on a Hunt. It leads them to an idyllic 1950s style town where everyone is inhumanly unhappy and polite. It’s fairly unoriginal as stories go but it does serve to highlight what Sam currently lacks and offers an easy solution to that problem when he succumbs to the influence of Chip. Naturally the cost is too high but the contentment was appealing all the same. Misha Collins does a great job with his deadpan line delivery enhancing an already comedic situation and Jared Padalecki fully commits to his inhumanly happy Justin persona. Chip is a solid villain who had a lot more potential than the episode let him have. His motivation for turning the town into the idyllic setting wasn’t malevolent but the removal of choice is a step too far. His daughter Sunny is controlled by him in a different way and breaks free from that by fighting back. There’s nothing bad here as such but Chip could have connected to Jack’s plot in a much more tangible way.